“A dog is a bond between strangers.” – John Steinbeck

Roux, loving life - and so are her two new friends

John Steinbeck wrote a beautiful book in 1960 called Travels With Charley. He wrote about traveling around the US in a camper with his poodle Charley. About  the connections they made.

I’ve always liked having my dogs help me make connections. To be a bond between strangers. I am often inept at making those connections on my own, but the dogs always teach me.

Yesterday (Wednesday, 23 March) I had the rare opportunity to blend two things I love – hanging out with remarkable people and remarkable dogs at the same time. Roux and Mackey and I got to spend time with some old buddies of ours at a residential place out in Glen Allen.

The image at the top of this page is of Roux, a female German Shepherd, maybe 4 y.o., great personality. That’s what happy, relaxed dogs look like. Can you see how she’s smiling? The energy in that room was very, very peaceful. Including me there were six adult males, two in wheelchairs, two with walkers. The guy with the white sleeve is a former Military Police officer and worked professionally with German Shepherds. He is confident and capable and Roux reflected this back. Healthy, well-adjusted dogs reflect our moods to a great degree.

This is Mackey, a male Flat-Coated Retriever, approximately Roux’s age. They’ve grown up together. Mackey’s not as confident as Roux, but he was feeding off the calm energy of the room and he was quite calm himself.

Mackey getting some love

When it’s spring in Richmond, take pictures of flowers. If you’re not looking at them, rub your eyes and start paying attention. They’ll be back next year, but they’ll also be gone soon. Look at them now – they’re here. As a friend once reminded me, “that’s why the call it ‘The Present’”. This enormous forsythia was in full riotous bloom right next to where we parked the car. If there had been two minivans parked behind it they would have been completely hidden. It was huge:

"It was all yellow" - Coldplay

Another shot of Mackey. If you spend time around dogs, you’ll see he’s not as confident or relaxed as Roux. But he’s definitely happy to be there, and the peaceful people in the room are bringing out his inner peaceful dog. 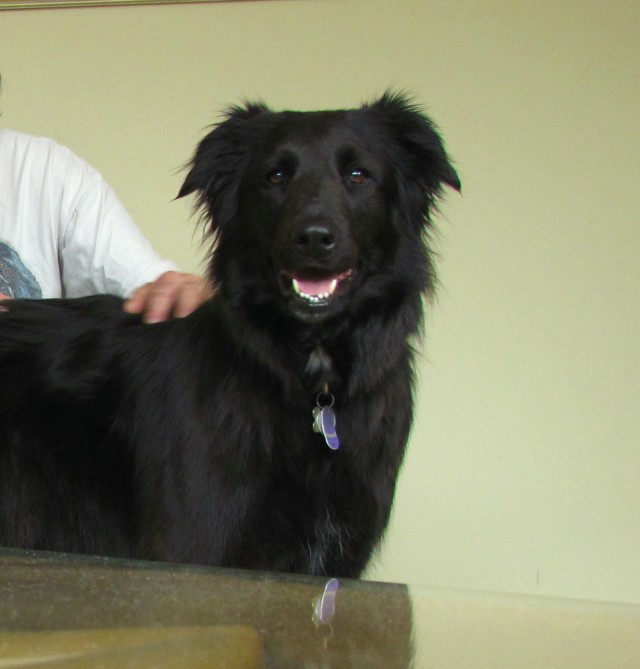 Want to see how a dog says “all is right in my world”? Check Roux out. Some of these guys are a little bit teetery and unsteady and Roux knows it. She’s saying look pal, I’m just going to put my belly right here and how about if you rub on it for a while. I’ve done Animal Assisted Therapy in a few extremely intense environments over the past fifteen years – nothing like this place. The more I watch dogs and people interact, the more I am convinced dogs understand the feedback loop that happens here. The person feels great rubbing the dog’s belly and the dog feels great getting its belly rubbed. Sometimes I feel like I’m not even there. Like if I walked out of the room, went out to lunch and caught a movie and came back three hours later, they’d both still be at it. 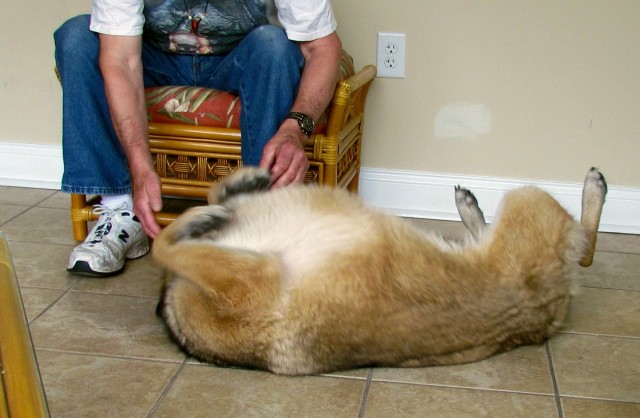 Trying to relax, always a struggle for Roux!

Do you want to experience a feedback loop? Try being the person who has the indescribable privilege for bringing those dogs into that environment. I have to pinch myself. It’s so fantastic I’m sure it has to be a dream.

PS If you know me and Ivory, it’s no cause for concern that I didn’t bring him along today. He stayed home with Max and took it easy. I’m going to bring them out later to spend some time with another old buddy of ours.

I am a rehabilitation counselor. I have many friends with autism and traumatic brain injuries. They help me learn new things constantly. I hike with dogs at the James River in Richmond - a lot. I've completed an Iron distance triathlon a year for 11 years. My most recent was in Wilmington, NC in November, 2013. I currently compete in mid-distance triathlons. And work and hike and take pictures and write and eat.
View all posts by Jay McLaughlin →
This entry was posted in Dogs, Flowers, People, Smiles (including "dog smiles"!) and tagged Dogs, Flowers, People, Smiles - human AND dog smiles!. Bookmark the permalink.

4 Responses to “A dog is a bond between strangers.” – John Steinbeck