A progression of Red-tailed hawk pictures I took at Bryan Park beginning 4/12/2016. It starts with a nest and ends with a baby hawk (eyas). Click on the pictures for a closer view – they get much larger. The movies are only around ten seconds long.

As of June 4, 2016 there are 23 still photographs and nine short videos chronicling the development.  The first picture of the baby (eyas) appears on May 3; it’s only a glimpse. You can watch the baby mature and grow as time passes. It’s been nearly two months since we first sighted and adult Red-tail there, then the pair. I’m fascinated every time I visit. I hope you enjoy this.

Adult red-tail on the nest: 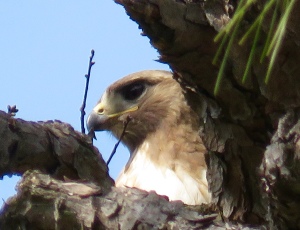 Adult on the nest: 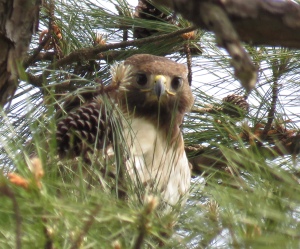 The origin of the expression “watching like a hawk”

Adult on the nest, different angle

Red-tail on the nest

Indistinct red-tail adult in the mist on the nest

On May 2 at 4:25 PM I saw my first every baby Red-tailed hawk! The images I took that day were indistinct, but you can see it in this picture: 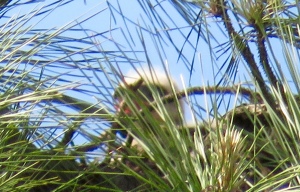 I returned the f0llowing day; no sign of the baby, but an adult being harassed by a bluejay: 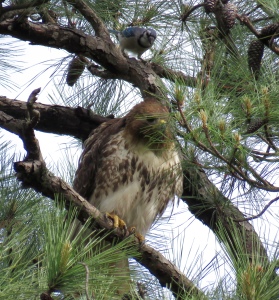 Adult red-tail being harassed by a bluejay (see it just above the hawk?) 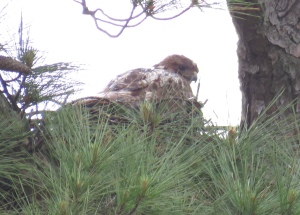 Same day, 10:37 AM, brief movie of a bluejay flying up behind Red-tail and striking it on the shoulder: 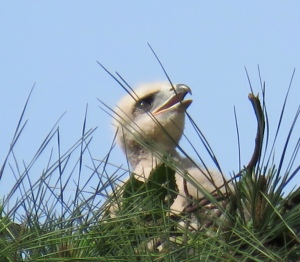 Female on left, baby in middle, male on right

Same day and time, baby is more visible, male is looking away: 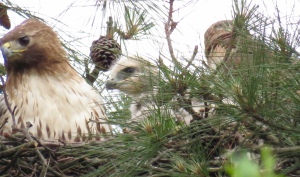 Baby more visible in middle, female on left, male facing away from camera on right

Baby peering over top of nest:

Video of the same hawk taken just moments after that photograph: 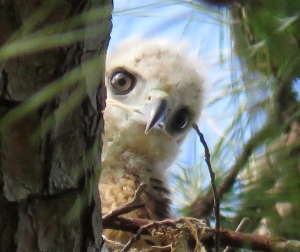 I’ve begun referring to this as simply “that gaze” – they always know you’re around.

We couldn’t get back again for seven days. When we returned on 5/23/2016, 4:29 PM, the cute little baby had begun to look distinctly like a small hawk:

It doesn’t move gracefully – yet – it has an unmistakably teenager-ish stumble. But they learn so fast:

This time we were able to make a quick turnaround, and were back at the nest again on 5/24/2016, 5:09 PM. I took about eight pictures of it that afternoon staring directly at us. It turned its head away at one point, probably hoping its parents are getting food: 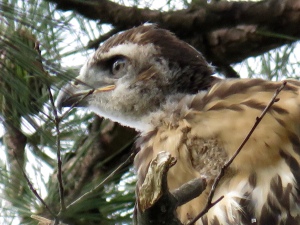 I don’t think raptors ever daydream. Especially young ones. They think about eating.

I took this video less than one minute later. I don’t know what this head-tilting means, but they do it a lot:

I returned two days later on May 26, 2016 at 4:38 PM and took this picture of the youngster gazing out at something only it could see: 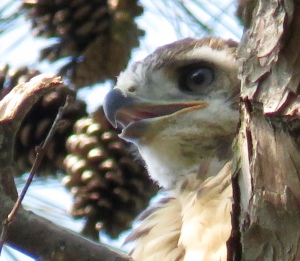 They mature so fast. It looks less “silly” each time I return.

Here’s the youngster perched in a notch in the loblolly pine. It appears to be gazing at its talons, and its talons appear to have hair in them, perhaps from tearing apart food:

Young Red-tail appears to be contemplating its talons.

Here’s a video of that bird taken moments later. It’s a little over ten seconds long. If you watch, you can clearly see it eating meat:

This little one is constantly moving its head. Getting oriented or something – I’m not certain.

So many bugs around – the little one also scratches a lot. A video I took just after that still photo above: