Can some mornings be more perfect than others?

I think not, but today was exceptional. Very pleasant, very low-key, perhaps it helped I slept in until 8:00. I took a four-hour bike ride yesterday. I’ve mentioned before what I refer to as The Happiness Cocktail™. Three ingredients: caffeine, endorphins, sunlight. Have a cup of coffee and go for a relaxing bike ride on a stunning Saturday morning and see how you feel. It is amazing. That evening a  friend and I went on the Slave Trail Walk by torchlight – seriously – and I didn’t get home until after midnight. Yikes. The walk was led and interpreted by the incomparable Ralph White of the James River Park System here in Richmond. Ralph is a gifted orator, a spell-binding speaker, a natural teacher and a well-informed historian. And keeps all the plates in the air that make up the most beautiful urban park environment imaginable. Visit soon – you owe it to yourself. The walk began at 9:00 PM which doesn’t lend itself to photography, or at least not to a photographer of my limited skills. But try the slave trail some time – it’s a fascinating and informative experience. Meeting Ralph is another fascinating and informative experience – keep your eye out for him when you’re at one of our parks.

No slave trail pictures today, but a few from our leisurely hike at Pony Pasture this morning. If you came in my house right now, you might think there is something wrong with Mackey and Max and Roux. They are sprawled and not twitching. But they’re all breathing. They went full-blast at the river from start to finish today. Including swimming. If they were athletes after a race, or gamblers, or deal-makers, they would say they “didn’t leave anything on the table.” That is a key to living right.

This is how we saw the river when we arrived: 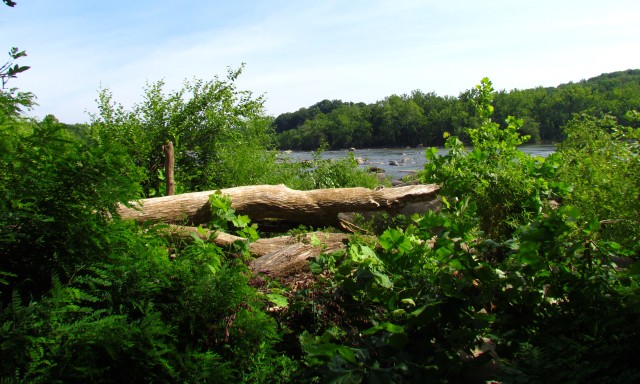 The James this morning

A step or two back

The river’s ~4’ deep now and some interesting rocks are showing. These two look nice in the green reflecting off the water:

Green for the most part

No dog pictures. Who would have imagined? I took one with my cell phone that I enjoyed this morning. It’s already on fb so some of you may have seen it there. Mackey is a little farther out in the water; those are Roux’s ears sticking up. Max is sitting patiently beside me as I take this picture. He swam later:

I am a sometimes omnivorous and at times voracious reader. My tastes can be peculiar and I don’t often care for the suggestions of others. And so don’t often extend my own. But my friend Grace (a.k.a. my blogging muse) recommended a book I am deeply hooked on. It’s not for everyone. The book is The Boy in the Moon and it’s written in the first person by a man named Ian Brown. Mr. Brown has a young son named Walker (current age 15 years) with a significant physical and cognitive disability. There’s an NPR interview with Mr. Brown here: NPR Interview with Ian Brown

I’m only ~1/3 through the book but I am captivated. Walker’s disability is cardiofaciocutaneous syndrome, or CFC. I am a rehabilitation counselor and my experience is primarily with people with autism, traumatic brain injuries, cerebral palsy, brain tumors, and cystic fibrosis. CFC is not any of those, but it has elements of each. As important is the impact Walker’s disability has on his family and on the constellation of people in his orbit. This is the passage that (so far) moves me most. Mr. Brown and his wife Johanna and Walker have visited a new doctor for the first time, Dr. Wang. So its impact is undiluted, I give you the passage in full:

“[Doctor] “Wang turned to me. “Do you have any questions?” “Just one. We rented a cottage this summer for the first time, north of Toronto. It’s a very remote place, very quiet. An island, no one around but us. Walker seems to love it. It changes him, calms him. It means a lot to me, that place, and how it changes him. Will I ever be able to explain all that to him?” Wang shook his head. “Not rationally, probably not. But”—he stopped, thought—“it sounds like he already understands it.” Another pause. “The Buddhists say the way to enlightenment, to pure being, is by getting your mind out of the way. I’m not trying to be trite, but Walker already knows how to do that. He is pure being. He may be developmentally delayed, or moderately retarded, but in that way, he’s already miles ahead of most of us.” That was the first time someone suggested Walker had a gift the rest of us didn’t.

That’s what I love about my work. A lot of my guys have a lot in common with Walker. I am – we all are – working toward enlightenment. My friends know I refer to the people I work with as my “teachers.” This is why.

You may not be a Buddhist or a Christian or care for religion at all. But at least in Dr. Wang’s opinion, Walker is “miles ahead of most of us.” And doesn’t even try!

This is a picture of water going over a rock at the river. This is one of the reasons I love it: 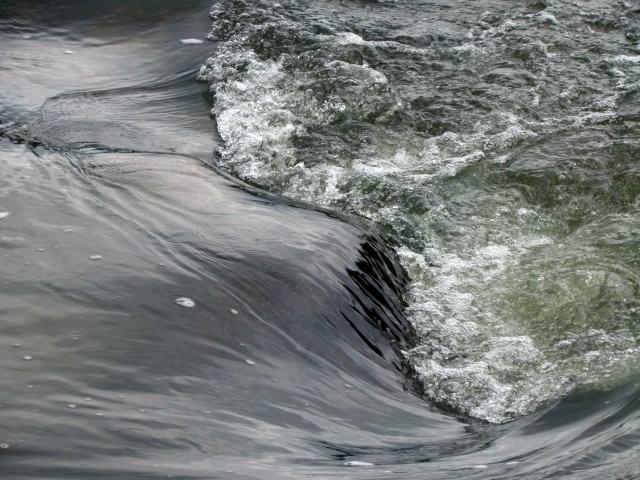 I am a rehabilitation counselor. I have many friends with autism and traumatic brain injuries. They help me learn new things constantly. I hike with dogs at the James River in Richmond - a lot. I've completed an Iron distance triathlon a year for 11 years. My most recent was in Wilmington, NC in November, 2013. I currently compete in mid-distance triathlons. And work and hike and take pictures and write and eat.
View all posts by Jay McLaughlin →
This entry was posted in Rivers. Bookmark the permalink.

2 Responses to Can some mornings be more perfect than others?