I haven’t done a “real” blog entry (whatever that is) in some time. I’m having a fun (more often than not), busy (that’s part of the fun) summer. My friend Max developed an ugly lump on his chest; it’s a mast cell tumor. That’s taken up a lot of time and energy from both of us. From Alex too; she’s been a huge help. Unlike Alex or Max I’ve been kind of a basket case about it. Alex has done a superb job every twenty-four hours bandaging Max’s very un-pretty open wound. So superb that the tech at the VEC on Cary St. raved about what a fantastic job it was. And they do great work there! Alex’s sure-handed response to Max’s (and my) difficulties has brought me a lot of peace. Max too I think, but he’s been much calmer than me from the start. Currently he has to wear a wide blue collar so he’ll leave his beautiful bandage alone.

Max was laid up for a while but is getting his strength back. He and Mackey and Roux and I went down to the river on Thursday but his wound (and his energy) wasn’t ready for a full-scale hike. So I just sat on a rock and watched the river flow by while Max lay on the ground beside me. Breathing the river air and soaking up the river energy. Mackey, always concerned, didn’t venture far. Roux, always looking for fun, ran out and played on the rocks. I got a few pictures of her I enjoyed. This one I am particularly fond of: 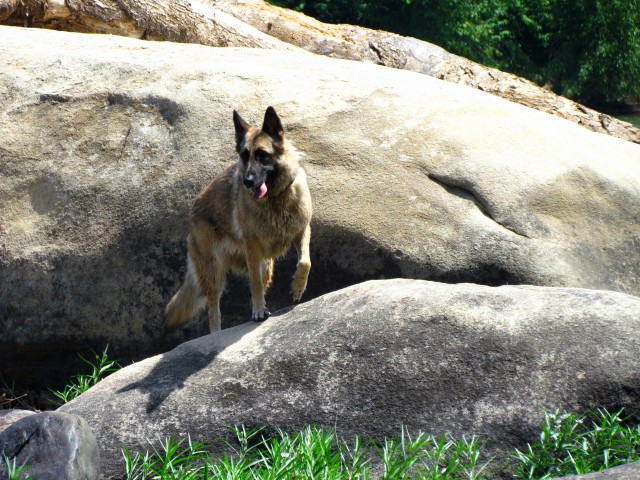 We stopped at Starbucks on the way down. Max waited in the passenger seat. If just being cute could make you healthy, this guy would never get sick. Have you ever seen a face like this?

I think this blue collar makes me look even cuter. If such a thing is even possible.

My friend Evelyn joined us at the river on a different trip; she took his picture of the four of us together:

My posse. Isn't that a fine looking bunch of animals? Great manners too.

I see these flowers at the river every year around this time; Evelyn says they’re marsh mallows. They are always blooming on a bush right at “The Altar” (as I refer to it), a quiet little place on the river bank almost at the east end of Pony Pasture. It’s where I put Ivory’s and my other animals’ ashes after I have them cremated. So I can visit them and meditate or whatever I’m up for that day.

A train, naturally. Clark and I were down there checking them out last week. I don’t know how many locomotives CSX has; it’s in the thousands. Sequentially numbered. And last week we saw CSX locomotive #1, The Spirit of West Virginia! It’s a stock locomotive, an AC4400CW, they may have more of them than any single other type. That engine is a work horse. But only one Number 1, and only one Spirit of West Virginia. CSX has maybe a dozen “Spirt of” locomotives, mostly AC4400’s, different towns, states, etc. I am uncertain about the significance. It was the rear engine in this pair:

My tomatoes are coming in thick and fast. I planted them in the house from seeds in mid-February. Transplanted them outdoors some time when the weather got nice. Now the plants are taller than I am! And we have basil everywhere. Fresh delicious tomatoes every day, it can’t be beat:

It's hard to believe, but it tastes even better than it looks!

Things are getting back to normal. Our definition of “normal” here is kind of a moving target but lately there are fewer disruptions. So I hope to get some more blog posts up soon. In the meantime, have a great day,

I am a rehabilitation counselor. I have many friends with autism and traumatic brain injuries. They help me learn new things constantly. I hike with dogs at the James River in Richmond - a lot. I've completed an Iron distance triathlon a year for 11 years. My most recent was in Wilmington, NC in November, 2013. I currently compete in mid-distance triathlons. And work and hike and take pictures and write and eat.
View all posts by Jay McLaughlin →
This entry was posted in Dogs, Flowers, Fun, People, Rivers, Smiles (including "dog smiles"!), Trains. Bookmark the permalink.

6 Responses to No excuse