The comedian Steve Martin says that “writing about music is like dancing about architecture.” More about that in the second section of this post. First, Turner, airborne:

If you’re in central VA, you know what an odd month it’s been. Weather wise, anyway. Friday afternoon I was at the river with a buddy and it was 82º and you might have said it was humid or at least muggy. Distinctly un-February like. Saturday at noon – less than 24 hours later – when I got on my bicycle it was crystal clear and 45º with 20 mph winds gusting to 35. I’d planned a 50 mile ride but after practically having my bike blown off the top of my car on the way out there, I opted for my 30 mile route. Click this link if you’d like to see it: Wind Fest. It took a lot of effort to average 14.6 mph for 2+ hours. Normally that’s one of my fast routes and I average in the mid- to upper-16’s and occasionally average 17. Not Saturday, that’s for sure.

On a ride like that, sometimes the best part is the end. I start and finish at a little church in eastern Goochland. I love daffodils and there are hundreds on the lawn:

Daffodils on the church lawn

It’s awful that it’s been two weeks since my last post. I’ve wanted to do ~1 post/week but life has intervened, as it sometimes does. Things are going well, just busy, which I never mind. I don’t know if the readers of this blog miss my posts – but I sure miss putting them up!

It’s been nearly a year since I began this blog, and I recall a picture of a dandelion being one I especially enjoyed. Dandelions will outlast us all; when there is nothing else, there will be dandelions. I saw this one on Wednesday. It’s only a dandelion – king of weeds in this area – but it’s a very pretty flower:

The dogs and I got to Pony Pasture a little late on Thursday; daffodils are blooming there too! Spring is early this year. It sprinkled a little the night before. This one is still wet, and perhaps even more lovely, if such a thing is even possible:

On an entirely different note, we cross the James River to get to Pony Pasture on the 50-year-old Huguenot Bridge. It is in the midst of a multi-year replacement project. The base of the new bridge is girded by girders. If you were wondering. They bring them down on 18 wheelers. This picture is taken from the Starbucks parking lot. One end of the bridge has Starbucks and the other end has Pony Pasture; we use it regularly!:

That’s a lot of girder.

Daffodils and dandelions are only a few of the flowers brought out by this early spring. These hyacinths are already opening up beside my driveway: 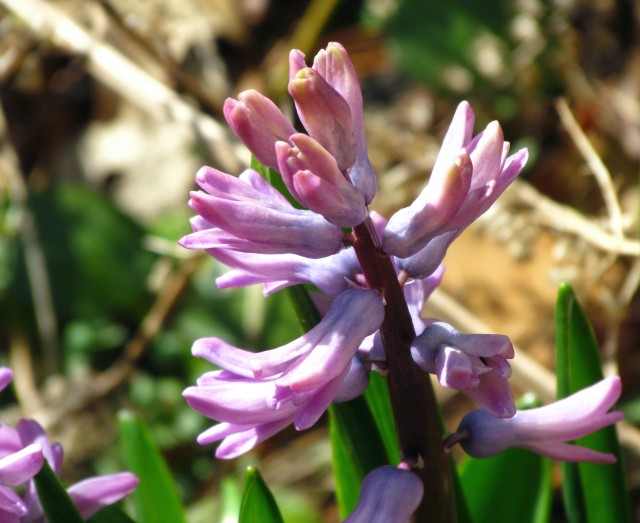 I have an obligatory dog picture at the top of this post and I like it a lot. I will close with one more. We had a nice hike this morning and I grabbed this picture of Turner speeding down the trail behind Roux. I don’t know why one is in focus and the other is not, but it’s still a cute picture: 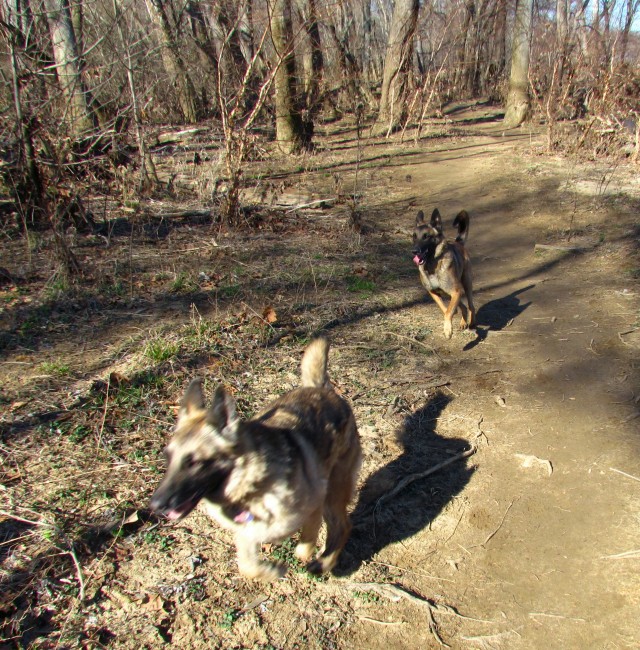 A friend gave me a great book called The Wisdom of Yoga (2006) by Stephen Cope. At the beginning of the book – even before the Introduction – Mr. Cope quotes another author from a work of hers. The quote is from a book called For the Time Being (1999) by a woman named Annie Dillard. The quote resonates for me:

“There were no formerly heroic times, and there was no formerly pure generation. There is no one here but us chickens, and so it has always been: a people busy and powerful, knowledgeable, ambivalent, important, fearful and self-aware; a people who scheme, promote, deceive, and conquer; who pray for their loved ones, and long to flee misery and skip death. It is a weakening and discoloring idea, that rustic people knew God personally once upon a time – or even knew selflessness or courage or literature – but that it is too late for us. In fact, the absolute is available to everyone in every age. There never was a more holy age than ours, and never a less.“

I hear a lot about how rotten things have become and I find it discouraging. It’s not discouraging because I think things have become rotten. It’s discouraging because some of us allow ourselves to think that way. Bad things happen regularly – but, as Ms. Dillard notes, they always have. And they always will. Things weren’t great back in the old days, and they’re not rotten now. She is much more eloquent about it than I could ever be: “It is a weakening and discoloring idea, that… people knew God personally once upon a time… but that it is too late for us.” In my opinion, this is the best time, and it is our responsibility to make it better. At the risk of sounding preachy and abrupt, to buy into the notion that “it is too late for us” is to be part of the problem – not the solution.

I have to get up early and work tomorrow too. I have a hard week ahead. But, just as they do every year at this time – you can count on this – each day will be a little longer, a little brighter, perhaps even a little warmer. The dandelions and daffodils and hyacinths shown here are just a taste of the riot of flowers we’ll see in the coming months. I will enjoy it all. Have a great day,

I am a rehabilitation counselor. I have many friends with autism and traumatic brain injuries. They help me learn new things constantly. I hike with dogs at the James River in Richmond - a lot. I've completed an Iron distance triathlon a year for 11 years. My most recent was in Wilmington, NC in November, 2013. I currently compete in mid-distance triathlons. And work and hike and take pictures and write and eat.
View all posts by Jay McLaughlin →
This entry was posted in Dogs, Flowers, Fun, People, Rivers, Smiles (including "dog smiles"!). Bookmark the permalink.