It’s early May and if you live in central Virginia, if you haven’t noticed, it smells incredible. It’s 3:00 in the afternoon as I write this and the temperature is not even 75º. This is no time for air conditioning, either in the car or in the house. This is the time for open windows and lots of deep, deep breaths. Preferably inhaling through the nose.

My last post was late April and there were already lots of flowers out. Some have  already come and gone. Redbuds, e.g., forsythias, etc. But right now nearly everything is blooming. Of all the flowers that are blooming now, this is my favorite, by far:

I went on a longish bicycle ride Saturday out in Goochland. At one point I rode past a wall of honeysuckle as long and tall as a boxcar. Or two. It was heavenly. This is my route, if you’re curious: Fifty mile spin. I did a 22 mile loop twice because I was afraid I’d get caught way out in a heavy rain but fortunately it held off.

There are two other delightful smelling plants blooming now, often in the same area as honeysuckle. Evelyn tells me these are privet flowers; they’re all over Richmond, growing in large bushes. This is a closeup, because I like the bright white against the dark background. But the closeup skews the perspective. Each flower is smaller than a pea. But each clump has dozens of flowers, and each bush has dozens of clumps, and the bushes are often lined up in rows:

Privet flowers – just a tiny part of a hedge

I regret I haven’t included a picture of a whole multiflora bush too. Because it’s hard to get an idea of the scale from these little pictures. Wikipedia refers to it as a “scrambling shrub” and says it will climb up to 15 feet and that it’s used as a hedge. I’ve never seen a small rosa multiflora.

Something the three of these plants have in common is a profusion of blooms. The individual blooms are not large, but a big bush has hundreds of them, probably  even thousands. The smell is at once delicate and unavoidable. Not that you’d want to. Avoid it, that is.

All three of the plants abound at Pony Pasture. It’s possible all three are what’s referred to as “invasive species.” I suppose that depends on your perspective. Since, if I understand my history books correctly, caucasian humans are an invasive species in North America. Those flowers smell great though!

When the dogs and I were at Pony Pasture this morning, you could not take a step without smelling some lovely plant. And I was getting a few photographs I knew would look good. But at the same time I was reflecting that a photograph of these plants does them very, very little justice. There’s the smell, obviously; I’ve hardly written about anything else. And you can get a sense of their beauty from the pictures too. But the sounds are part of the experience too. It was breezy this morning and you could hear it drifting through the treetops the whole time. And, especially for the first half of the walk, the sound of the river is a beautiful white noise. And the birds – their noise is anything but white. Birds, birds, birds, the songs are every tone and texture. And on a morning like this, they have no beginning or end – step out of the car and they’re singing, and they don’t stop. A more intermittent sound at the river is trains on the other side. Paul Simon says that “everybody loves the sound of a train in the distance” and there’s no doubt I do. The flowers are for seeing and smelling but the sounds that surround them heighten every sensation.

The multiflora rose are mostly finished now. When they fruit they put out rose hips, and I got this image more by accident than by design on Sunday. Some fading flowers on the top, dropping the last of their petals, and rose hips below, with a couple of spiderwebs if you look close: 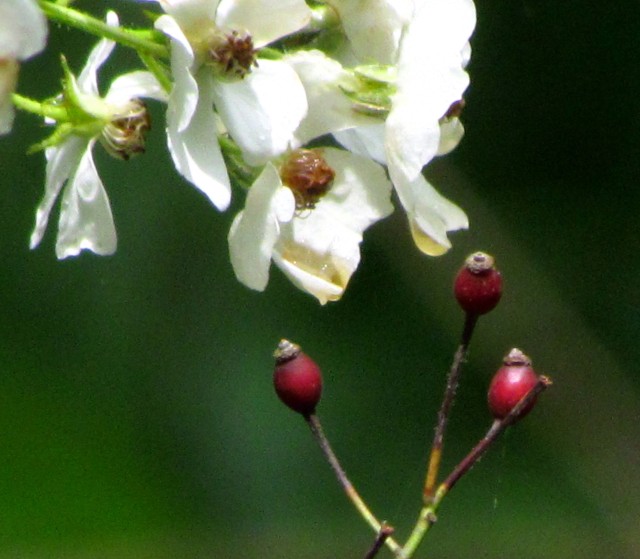 This was a pretty little flower I saw at Pony Pasture this week too. Not sure what it is, besides cute:

I haven’t only seen flowers and turtles. The bugs are pretty now too. The pollen and the inchworms are for the most part gone. But I saw this butterfly – perhaps it’s a moth – on a rosa multiflora the other day: 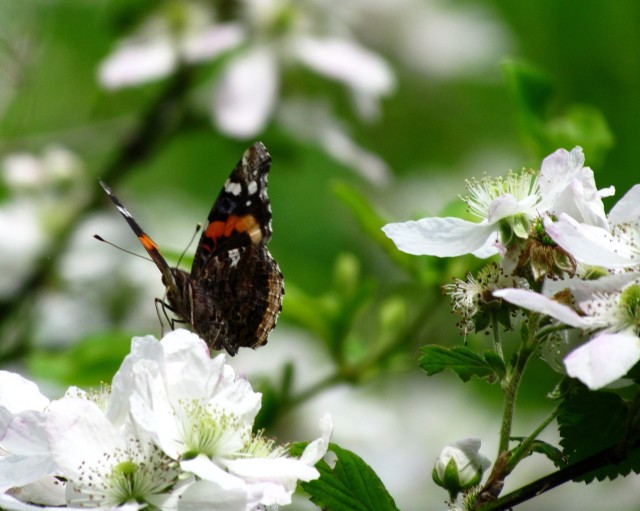 It may be a moth, it may be a butterfly – I am uncertain.

My fellow Richmonders are aware that in another month or two, the weather will be something other than comfortable. The bugs won’t be very cute either. But at the moment there are some interesting specimens climbing around. This ladybug looks okay:

I’m not sure what this next one is, and I regret not getting a better image. But it’s a neat looking bug:

Here’s a cute flower from the river; it was very, very tiny. Evelyn said it was, if I recall (I may not, or I may recall incorrectly), a wild pea: 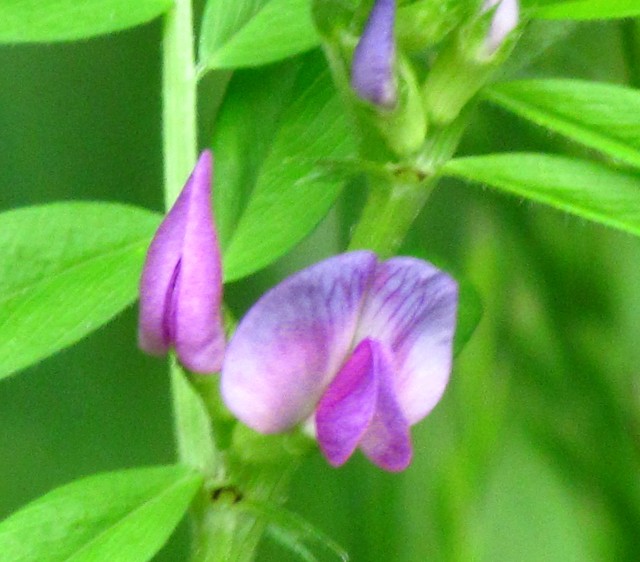 A wild pea – I think

While I’m displaying all these plant pictures, I need to recognize my friend Barbara who corrected me about a plant I misidentified as a catalpa in my previous post. You can look at that post here: Element of blank. Scroll down to the fourth picture. Purple flowers, below the two squawking goslings and above the dough-like fungus. Barbara tells me that’s pawlonia. Catalpa is a.k.a. “Indian Cigar Tree” (that’s what we called it when we were kids, anyway). It gets seed pods over a foot long, there are hundreds on each tree. I don’t know where we got the idea those looked like Indian Cigars, but there it is. Come to think of it, I have no idea what an Indian Cigar even looks like. Or if such a thing exists or ever existed. Catalpa flowers are white, not purple and if you are in Richmond and would like to look at one right now, a catalpa is blooming in front of the Epiphany Lutheran Church, where Monument Avenue dead ends into Glenside drive. When you get to the light, look across Glenside and a little to your left. It’s the only tree in bloom, you can’t miss it. Thanks for the correction Barbara!

Speaking of trees in this area, I have a very prolific mulberry tree on the side of my house. This is a picture I took the other day while cutting my grass. Those are too light-colored to be really ripe yet. It’s right outside our bedroom window which is open (it smells so good) and in the morning that tree fills with raucous birds. I’m uncertain how fast those birds digest their food. But it couldn’t take them more than a couple of seconds to fly across my yard and deposit the berries on my car in a much different form.

Last, a pair of mallards with a baby we saw this morning. The picture is un-stellar quality as this little family was wisely staying very dog-shy. I suspect some aquatic-bird mishap may have befallen this group at some point. I have never seen a pair of mallards with only a single duckling. Normally it’s either zero or several. Wikipedia says mallards lay eight to thirteen eggs at a time, and families are usually larger. But I had the impression that they were, like us, enjoying the morning. I hope you did too!

I am a rehabilitation counselor. I have many friends with autism and traumatic brain injuries. They help me learn new things constantly. I hike with dogs at the James River in Richmond - a lot. I've completed an Iron distance triathlon a year for 11 years. My most recent was in Wilmington, NC in November, 2013. I currently compete in mid-distance triathlons. And work and hike and take pictures and write and eat.
View all posts by Jay McLaughlin →
This entry was posted in Dogs, Endurance, Flowers, Fun, Rivers. Bookmark the permalink.