And May was gone! And I only did two blog posts! They were both decent posts, though. I see I only did five last May, and six last June. I have a few nice pictures left over from late May of this year, and a couple from the beginning of this month, so I’ll start the month off with a blog post. And hopefully get a couple more out this month. It’s been a pleasant, pleasant spring. I got out and rode my bike for a couple of hours and when I finished at 2:00 PM it was only 72º! Very, very temperate for June. I’m looking at a normally reliable weather site now (www.wunderground.com) that’s predicting of low of 48º for Wednesday night! I’ll believe that when I see it, but still. Pretty chilly for the first week of June.

My last blog post was May 21. I’ve had a few nice visits to the river since then; everything’s still fresh and springy looking. The river’s come up a time or two and I’ve gotten a couple of fun new pictures. I posted a couple on facebook but not everyone who sees my blog sees facebook. Plus the photo quality isn’t as good on facebook. I liked this turtle relaxing in the sun on a log in a little canal at Pony Pasture:

This is what an unworried turtle looks like. I would imagine.

A few minutes later she stuck her head out and looked around; I zoomed in and got this:

The eye, as Kim says, is “highlighter” colored. Precisely. Cool looking pupil too, isn’t it? Click on this picture to enlarge it; it’s really neat.

My friend Kim said the eye is “highlighter” colored; perfect.

I only walked downstream a couple more minutes when I saw this crowd also soaking up the sun. That mother mallard only has two babies left. I don’t know if big fish or snapping turtles or maybe raccoons or – I certainly hope not – dogs – are getting the babies, but something is. Foxes, perhaps. Nature is, as Lord Tennyson said in 1849 “red in tooth and claw.” Kind of sad when you take it from the perspective of the ducks. If you take it from the perspective of hungry baby foxes, perhaps not quite so sad. The turtles look so ancient. Or timeless:

Two turtles, three ducks, one river, and a branch.

Predictably, a couple of trains from last week or the week before. The train on the left was parked (you can tell because the headlights are off) and it was idling when my buddy and I got down there. That’s #4739, an SD70MAC. You can’t see it in this picture, but locomotive #99 was behind it, an AC44CW. Followed by a loaded coal train. My buddy and I were just getting ready to walk back to the car when the train on the right appeared. That’s a little bit of a downhill right there on the train tracks and the trains hardly make any noise. I think the bulk of the coal train soaks up a lot of the vibration too. Because one minute there was only one train and suddenly there were two. It’s more than a little bit unnerving. The right hand train in this picture, the moving train, the one with its headlights on, #7773 is a C40-8W. Behind that locomotive (another one you can’t see) is locomotive #8520, an SD50-2. That pair on the right hand train (#7773 and #8520) “only” have 4,000 HP and 3,500 HP respectively, not enough to handle a loaded coal train. That entire right hand train was covered hoppers, which usually means some type of grain, which isn’t heavy. Lots of them are owned by Archer Daniels Midland. Coal is always carried in uncovered hoppers because it doesn’t matter if coal gets wet. Grain has to be protected from the elements.

Another buddy of mine and I have followed the construction of the new Huguenot Bridge since the beginning. The “new” bridge is nearly complete, or at least the piece they refer to as “Phase 1”, which is west of (upstream of) the original bridge. I get occasional bridge construction update emails from the VDOT. The latest update says that next month (July) they’re going to shift traffic to the new portion of the bridge and close the old side. Then they’re going to tear down the old bridge; perhaps that is what they’ll call “Phase 2.” Because once that’s completely torn down, they’ll widen the new bridge to its full width.

The trail from Huguenot Flatwater that goes under the bridges is still open to pedestrians. They’ll close it soon when they start tearing the old bridge down. My buddy and I walked down there to have a look last week. We got this picture, looking up, and south, from underneath the bridge, on the south bank of the river.

In this picture, the new bridge is on the right and the old is on the left. See how massive the piers are for the new bridge? Also, if you look up on the right side you’ll see it’s currently three girders wide. After they tear down the old bridge, they’ll put two more rows of girders up there. Get a good look, because a couple of months from now – maybe even by the time school starts in the fall – there won’t be any more “old” Huguenot Bridge! Wow. The river will be unconcerned: 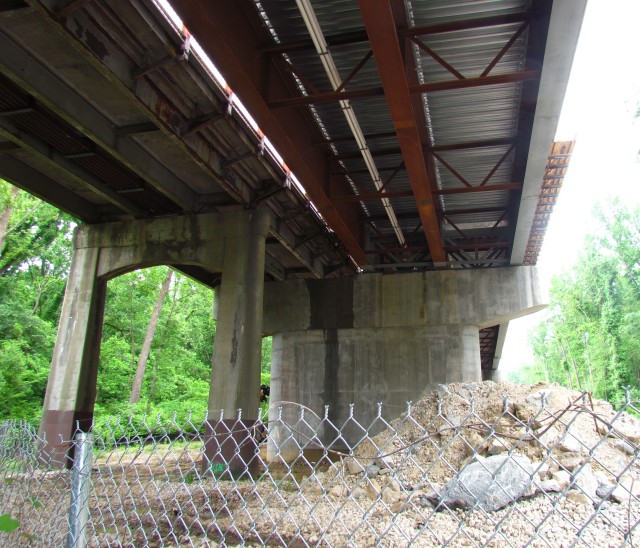 Out with the old (left) in with the new (right).

Speaking of the river – did I speak of the river? – Alex and Roux and Lee and Lucy joined Mackey and Turner and me at Pony Pasture last Sunday. Lee was kind enough to take our picture – thanks Lee!:

Alex (left), then Roux, Turner, me, Mackey, Lucy. Thanks for the picture Lee!

We’re still getting plenty of rain and the heat has not yet become particularly withering. I was at the river Tuesday morning and took this picture of a lily. With plenty of bugs pollinating it:

The same morning I took a picture of this tiny flower; it was very petite. I am uncertain what it is, perhaps a wild pea:

A cute flower from the river – but I’m not certain what it is. Anyone?

And I know I’ve already put magnolias up. But they’re practically hanging on my car door when I get in and they smell so rich and I enjoy them whenever I pull in my driveway. Thanks Bob and Barbara and Brianna and BJ!:

Nearly all of the train pictures I post are of trains stopped before heading out on the viaduct. Here’s one that’s moving. Locomotive #415 is in the front followed by #35; it’s a pair of AC44CW’s followed by all coal. By far the most common train we see there:

A pair of AC44CW’s on the viaduct

I don’t obsess on blinking too much; there’s always something beautiful to see. But the flowers are so lovely. Forgive me if I’ve mentioned my hydrangeas in an earlier post. They’re on the north side of my house and almost the only time I’m there is when I cut the grass. I can look out my bedroom window in the morning and see them but then my day begins and I get caught up and I’m gone again. I got a picture or two earlier this week. They stretch across the whole north wall of my house. I don’t know as much about hydrangeas as I should. I do know that, like litmus paper, they change color as the acidity of the soil changes. I have lots of big old pine trees in my yard; they do something to the acidity of the soil, but I’m not sure what. When I first moved here the hydrangeas were all blue. I left the hydrangeas toward the back (west) side of my house alone. They stayed mainly blue:

A few years ago I began dumping ashes from my woodstove onto the front (east) hydrangeas but not to the others. They turned pink. Kind of neat: 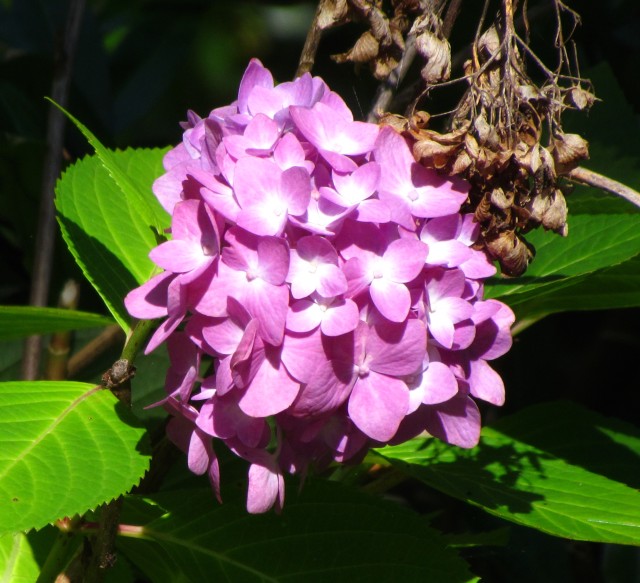 Yikes! I’ve overfilled a post with pictures yet again! And haven’t written enough! I get good feedback about my “addendums” – thank you all for the support. I love to write them but sometimes – too often – lack discipline. I’ll write one soon, but not today. If my cat could talk (see Della and the Dealer, Hoyt Axton, 1979) he would tell me I put way too many dog pictures in here. Honestly he probably wouldn’t; he is entirely unconcerned with the dogs. If they’re between him and where he’s going, he doesn’t even waste the energy to walk around them – he just walks right under. He’s been around longer than Mackey and way longer than Turner. His name is Dash and he matches my wood floors very well:

4 Responses to I blinked!