Posted on February 2, 2013 by Jay McLaughlin

Seven years ago this morning, Ivory and Nicky and I left before dawn to drive to the Yukon Territory in northwest Canada. We were volunteering at the 2006 Yukon Quest. From the time I pulled out of my driveway that February morning until the time I parked here again five weeks later, I drove well over 10,000 miles. To get to Whitehorse, you drive to Seattle, then turn right and drive another 2,000 miles. My brother Shane made a neat map of the trip. Take a look at our route here: Yukon Trip, 2006 . The drive to the Yukon took around ten days (five to Seattle and five from Seattle to the Yukon). I stayed for about two weeks in the Yukon, and the trip back took ten more days. Including staying a couple of days with my friend Nate in Longview, WA and a couple of days with my friends Marni and Jason and Zane in Portland, OR.

It occurs to me that some readers may have never met Ivory and Nicky. Perhaps unsurprisingly, they’re dogs. My first two. They’ve both been gone for many years. Someone, probably my friend Pat, took a picture of the three of us on the banks of the Yukon River just as we arrived in Whitehorse. Ivory is behind me and Nicky is on his hind legs. He spent a lot of his waking hours on his hind legs – ever an elegant and graceful dancer. I should have learned from him!: 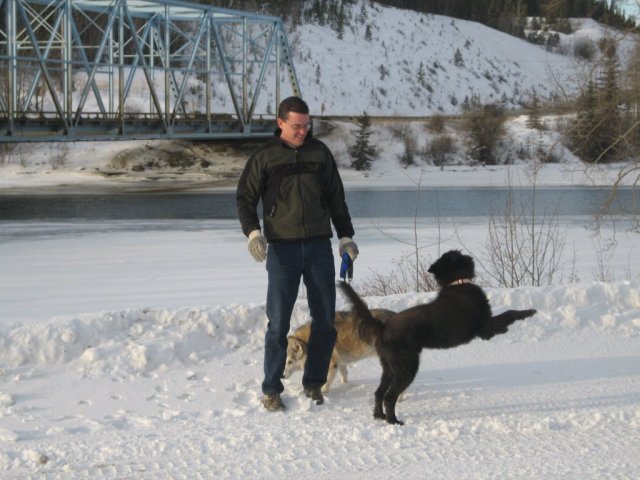 Welcome to the Yukon!

If you look at the blog you’ll see a lot more pictures of both of them.

I’ll put a link to the blog from that trip here; go through it at your leisure if you find it interesting. The link here is mid-blog, on a day that was particularly fun. But the whole thing was fun. A non-random post, from February 17, 2006:
“If the reward for virtuous living…”

Two tips for navigating this blog. There are many pictures. The first post is from December of 2005 and it ends in March of 2007 after 75 posts. But 45 of the 75 posts are from February of 2006, beginning seven years ago today. Blog tips:
1. Click on the pictures (in the blog); they get a lot bigger
2. At the bottom of each post is a link that says “Newer Post” or “Older Post”; click on those links to move forward and backward. Or “Home” to go to the beginning (really the end) of the blog.

I am a dedicated nostalgiaphobe; the alleged good old days were no better than today. There’s a reason we call it “The Present.” But I learned a lot on that trip and I loved every minute. And I’m going to share a small sample of the more memorable experiences. There are two reasons for today’s post. One is that the 2013 Quest begins today in Whitehorse, Yukon Territory, Canada. Click this link to go to the Quest’s web site: Yukon Quest

The second reason for this post is that we left on Groundhog Day; it was February 2, 2006.  Today is the seventh anniversary. In 2006 February 2 fell on a Thursday. The content on that seven year old blog is not as consistent as this one. The pictures aren’t great (except for a few) and neither is the writing but the experience was singular. Here’s the post from Day 1: Yukon Quest Blog, February 2, 2006

We left way before dawn that morning because I wanted to drive a long way the first day. Of course we headed first for my favorite Starbucks (River Road 2, 5001 Huguenot Road, Richmond, VA) to fuel up. Imagine my surprise when my old friend Cris was waiting for me there in the dark – I didn’t even know he was coming! A few minutes later my friend Jim, a fellow Pony Pasture dog walker also showed up to see me off! What a great way to start a great trip.

Out of the 44 February posts, there are a lot of pictures – probably a hundred or so. A few are good. I like this one of Ivory and Nicky and me talking with a little knot of people in downtown Whitehorse. Notice Nicky flying around. I can tell that’s a really cold day by the way I’m dressed. We met so, so many nice people. Someone from the race HQ had followed our blog as we crossed the US and drove north through British Columbia. Shortly following our arrival in Whitehorse I was taking Ivory and Nicky for a walk. A person walked out of a building and says “Ivory! Nicky! Welcome to the Yukon!” And people say southern hospitality is great. There are nice people everywhere: 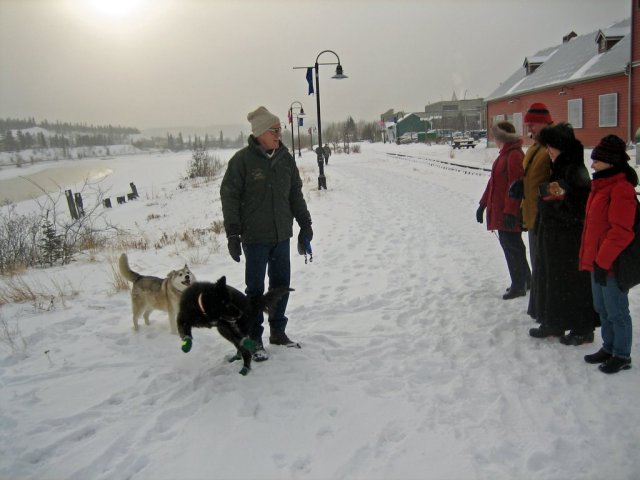 Happy people and dogs on the banks of the Yukon River – Whitehorse, Yukon Territory, Canada

I of course enjoy wildlife, as you’re aware if you’ve watched this blog much. As we drove south out of Whitehorse, people told us to watch out for bison in the road. They’d just stand there. They regularly weigh 2,000 lb., as in one ton. I’d come around a corner in the car and see eyes reflected in the headlights and this:

We did the whole trip in my green 2001 Subaru Forester. It’s parked in my driveway as I type this; Turner and Mackey and I will take it to the river tomorrow morning. It’s got around 220,000 miles on it and is my “dog car” but it’s reliable and runs great. Which is why my “people car” is also a Subaru Forester, only a 2011 with considerably fewer miles. And considerably less dog hair.

There are a lot of pictures of that Forester on the yukonmutts blog. Many covered in snow. Here’s one in southern British Columbia, half a day north of Vancouver. That’s my friend Pat fixing a peanut butter sandwich on the hood of the car. Ivory is on top of the snow bank and Nicky is on the other side. Pat flew from Richmond to Vancouver and I picked him up at the Vancouver airport. He drove to Whitehorse with us – it took five days – and flew back to Richmond the day after we arrived. The car is clean and beautiful because I’d gotten an oil change at the Vancouver Subaru dealer and they washed it for me. Then followed my blog and commented on it! Great group of people. Great car too:

Excellent Subaru – my 2001 Forester in the southern Canadian Rockies

That was the beginning of our northward journey from Vancouver to Whitehorse. It’s on the yukonmutts blog (a random post from that blog: yukonmutts.blogspot.com).

I began this blog post then realized the whole post, more or less, is in that six-year-old yukonmutts blog. If you choose to flip through it. I see it’s only been a week since my last post on my current blog (the last post was Attics Of My Life) so I don’t have tons of new pictures. But I’ll get a couple in here. I’ve mentioned before there are just tons and tons of waterfowl at the river now – more than normal. And there’s normally a lot. Here is a pair of the most common; I just liked the pose. This is something Canada geese do a lot:

I posted the next picture on facebook. I was trying to get a shot of a bufflehead and he began to take off. I snapped the shutter just as he began to fly. I like the pattern of the wake behind him, and the water droplets flying in the air. And his pink right foot: 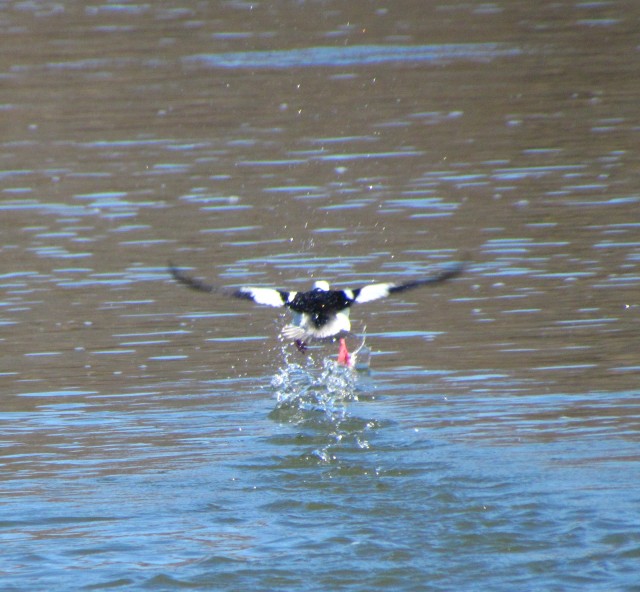 I got a nice indirect lesson this week from one of the guys I work with. I hope you enjoy it too. Meanwhile, have a great day,

That’s why they call it “The Present”

Believe me, I see the irony of including a story about “The Present” at the end of a blog post about a trip I took six years ago. But I had a little story pop up this week that I enjoyed. As some of you know, I spend a lot of time with people with disabilities. I take a buddy to the Y to swim every Friday; he’s a big guy with a big personality and he loves hamburgers. He doesn’t say much – almost nothing – but when he’s at the Y he says “hamburger!” a lot.

Everybody’s happy to see him at the Y. They’re happy to see him at Martin’s, at Starbucks, at the gas station, wherever we go. He’ll be twenty-four in July and we’ve been spending time together since he was eleven, so we’ve been a lot of places together. We have many common acquaintances. I saw one of  our mutual friends at the Y this week and the guy asked me about him. Asked me about spending time with my buddy, what it was like, etc., because my buddy’s not as chatty as most of us. Doesn’t make a lot of small talk.

And as I talked with this guy at the Y – a guy I probably would never know if I didn’t bring in my old friend who says “hamburger!” a lot – it occurred to me why I enjoy the experience so much. Because in the thirteen years I’ve spent with this guy, in the thousands of hours we’ve been together, among the dozens of people we’ve interacted with, I have never – not once – heard a complaint. Not just from him – he never complains – but from the people we meet. Complete strangers and people we know well. No one ever says “boy this economy is awful” or “gosh gas is expensive” or “oh I wish it wasn’t so cold outside” or “my job sure is hard.” Never ever. And you can tell that stuff is just not even occurring to people when they meet him. They’re fully in the moment, fully present, just being themselves. Just like him. What a gift or, if you will, a present.

I am a rehabilitation counselor. I have many friends with autism and traumatic brain injuries. They help me learn new things constantly. I hike with dogs at the James River in Richmond - a lot. I've completed an Iron distance triathlon a year for 11 years. My most recent was in Wilmington, NC in November, 2013. I currently compete in mid-distance triathlons. And work and hike and take pictures and write and eat.
View all posts by Jay McLaughlin →
This entry was posted in Dogs, Endurance, Fun, People, Rivers, Smiles (including "dog smiles"!). Bookmark the permalink.