Today (April 5, 2013) is the 25th anniversary of my accident. That’s a long time. Only a few readers of this blog knew me before that. For reasons I am unsure of, I’ve thought more of my late father today than any other particular subject. None of it’s been maudlin or disheartening, but I’ve thought of him a lot.

Dad only took a few things seriously – but definitely not himself. Above all he took raising a family seriously. By all accounts, he and my mother have been successful. He took his work seriously. I’ve often quoted Woody Allen in this blog saying “eighty percent of success is showing up.” Dad always showed up. Throughout his career, and at the Rescue Squad. If I’d ever been hurt and an ambulance with my Dad on the crew showed up, I’d be relieved. If my Dad was there, you were going to get taken care of the right way. Dad took The Golden Rule seriously, I think more seriously than anyone else I’ve ever known. But I never heard him, and I guarantee you never did either, say anything about “The Golden Rule.” Or about “do unto others” or any other niceties or elegant phrases. Dad lived it, which in my mind is the only way to truly take it seriously.

But Dad didn’t take himself seriously. He loved cartoons, especially Calvin and Hobbes. For years the signoff on his emails said: “It’s a magical world, Hobbes … Let’s go exploring!”.

He had this cartoon framed and hanging in the living room: 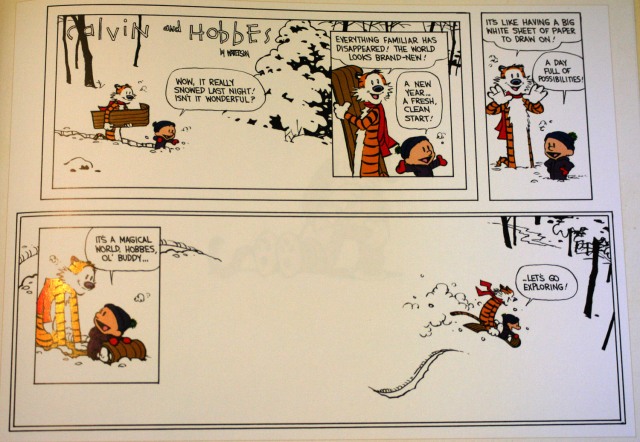 But sitting on my desk beside me – as I type this, on April 5, 2013 – I have a printed copy of an email from Dad from May of 1998. He was having computer problems. His email signoff that day said “You know, Hobbes, some days even my lucky rocketship underpants don’t help.”

Anyway, hopefully this isn’t overdoing it, I’m just moved to put a brief blog post up. It’s been a great 25 years. One quick picture today. I was down at the train tracks with a buddy the day before yesterday. A big coal train was leaving as we were arriving. Housing starts were up in that region; I saw this construction worker:

I am a rehabilitation counselor. I have many friends with autism and traumatic brain injuries. They help me learn new things constantly. I hike with dogs at the James River in Richmond - a lot. I've completed an Iron distance triathlon a year for 11 years. My most recent was in Wilmington, NC in November, 2013. I currently compete in mid-distance triathlons. And work and hike and take pictures and write and eat.
View all posts by Jay McLaughlin →
This entry was posted in Fun, People, Smiles (including "dog smiles"!). Bookmark the permalink.