Birthdays and Bugs and UNbirthdays

A mea culpa – I credited Cappy with the first photograph of my last blog entry, the photo of my family at Shane and Kristin’s wedding. Cappy told me she didn’t take it! Whoever took it either a. doesn’t read my blog (billions of people don’t; I don’t take it personally) or b. knew they were actually the photographer but were gracious enough not to say anything. I suspect it’s b., and I suspect it was my brother-in-law Greg, an excellent and modest photographer. If he tells me it wasn’t him, look for another mea culpa on my next entry.

I was fortunate to have a birthday on Friday (August 23). I am even more fortunate to have Evelyn to celebrate with, and many human and dog friends. And the weather here in central VA is beyond compare. Very un-August like. I’m looking out my office window now at my blue car and our green lawn and red maple and the colors are so brilliant it’s like I’m wearing special glasses. Reality enhancement glasses. “Just like reality, only better.” That’s the kind of birthday I’ve had.

I just read Through the Looking-Glass, Lewis Carroll’s (Charles Lutwidge Dodgson’s) 1871 sequel to Alice in Wonderland. Here’s a relevant passage:

‘They gave it me,’ Humpty Dumpty continued thoughtfully, as he crossed one knee over the other and clasped his hands round it, ‘they gave it me— for an un-birthday present.’

‘I beg your pardon?’ Alice said with a puzzled air.

‘I mean, what IS an un-birthday present?’

‘A present given when it isn’t your birthday, of course.’

Alice considered a little. ‘I like birthday presents best,’ she said at last.

‘You don’t know what you’re talking about!’ cried Humpty Dumpty. ‘How many days are there in a year?’

‘And how many birthdays have you?’

‘And if you take one from three hundred and sixty-five, what remains?’

‘Three hundred and sixty-four, of course.’

Humpty Dumpty looked doubtful. ‘I’d rather see that done on paper,’ he said.

So my real birthday was Friday, and it was superb, but Evie and I put together a string of un-birthdays, and what a gift. A present, if you will. But I digress. As I occasionally do. Two plus weeks since my last post and it’s been sunny and beautiful and this whole summer has seemed like spring. The deep green outside my window is much more common in May than August. Flowers continue to  bloom vigorously and there are lots of bugs taking advantage of it.

Last Saturday (August 17) would have been Dad’s 78th birthday, if we had been fortunate enough to still have him with us. Dad was in my estimation unsentimental; he knew that life goes on. And lived in the present. I was impressed that one of my siblings posted this on fb on the 17th with nothing leading up to or away from it:

“I note with dismay the ad hominem phraseology that is appearing in the…discussions. It is understandable but unacceptable…I request that the participants review their inputs prior to submission and edit out phraseology that is not relevant to the issue. It is not fair to expect the forum’s moderator to be a censor.”

What a perfect quote for my Dad. What a communicator. When he wrote that he was younger than I am. And the youngest of his five children was eighteen years old. Astonishing. He wasn’t quite a grandfather yet – that was still two years off – but wow. Anyway, Evie and I took the dogs to the river for a quick hike (on August 17) and saw this beautiful flower in Dad’s favorite color:

That Monday I was hiking at Bryan Park with a buddy of mine and wow. Talk about flowers still blooming. There were passion flowers in the gutters, by the dozen. Covered with bees. I got a few images; this one turned out well:

A bee on a passion-flower

Just down the path there were berries ripening. I don’t even know what they were. I just liked the Easter-egg-like shades: 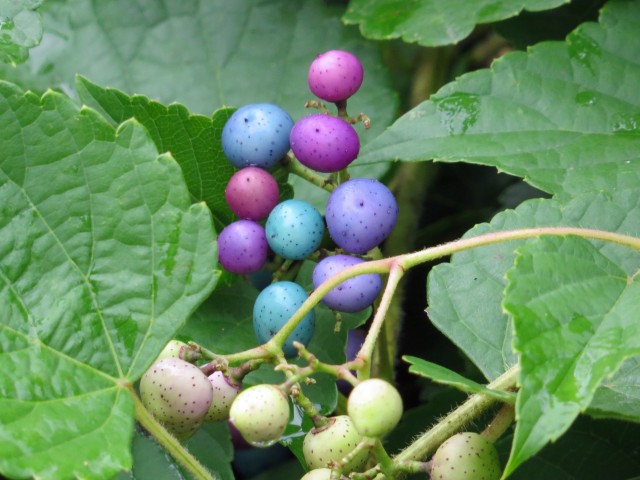 Spiderwebs are looking great now too. Last Tuesday (20 August) when the boys and I got to the river this web was in mid-construction in a broad sunbeam off the path. I watched her go around and around; what a treat. It’s hard, at least for me, to get good pictures, despite a lot of tries. This one’s not bad:

It’s marsh mallow time of year; they’re graceful and delicate and sway over the river. These face east toward the rising sun so I only see them from behind:

Marsh Mallow drinking up the sun on the river bank

Part of this beautiful summer has been beautiful clouds – constantly. I took this picture on Wednesday, right across the street from my house:

That was (I am moderately certain) just before a cold front came in. There was a massive storm and a few days later (Saturday) at Lamplighter I took this while Evie and I had birthday celebration #2:

I am (if perhaps you have been unaware) fond of taking pictures of the superb canine and feline friends that live with Evie and me. But I liked the way this fine boy looked at Lamplighter the same day:

Taking it all in

Today (Sunday, August 25) has been I think the last “official” day of my ongoing celebration; it’s been the best. Ev and the dogs and I went to PP this morning of course; I continue to try for the “perfect” spiderweb shot. Which may be like e.g. the perfect snowflake shot, or even the perfect river or cloud shot – they’re all different, they’re all perfect. Finding a great looking spider in a great looking web in great light is a vanishingly rare occurrence. But I like the attempts:

We left her to her breakfast and went home and cleaned up and went out for our breakfast – or brunch or late lunch, what have you, at Portico. It was our second time there (the first was Ev’s birthday) and the food and service and experience were as good or better – and the first time was beyond compare. My skill as a photographer or writer are not up to the task (or I’m not up to the task) of describing just how great this place is. If you’re a Richmonder, just go there. Especially for Sunday brunch – it is sublime in every way. Here’s the crowd who helped me celebrate today: 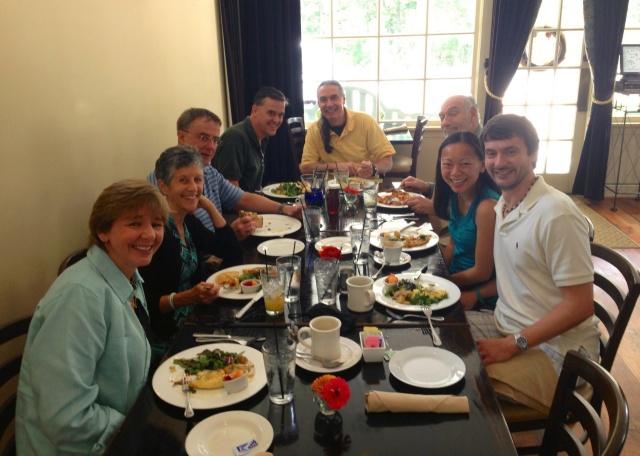 Unfortunately for us (not for them, they were going flying with their son) two of our party had to leave just after we ate. But our waiter Manny took the indoor picture and graciously took an outdoor picture too:

I’ve taken lots of pictures of bugs this summer – it’s fun. When people complain about the cold in the winter at Pony Pasture I always tell them winter has two advantages – no mud, no bugs. So I might as well get bug pictures while I can. Portico grows lots of their own fruits and vegetables and berries, and they even have their own beehives! Nice looking crowd here:

And finally a colorful flower from Portico’s prolific garden:

I was just getting ready to post this when I found an image I almost neglected to use. Perhaps you’re aware of the word “mashup.” In the internet, it’s when people take parts from two disparate sources and combine them. My Mom sent me the perfect birthday card; I called it an “analog mashup.” 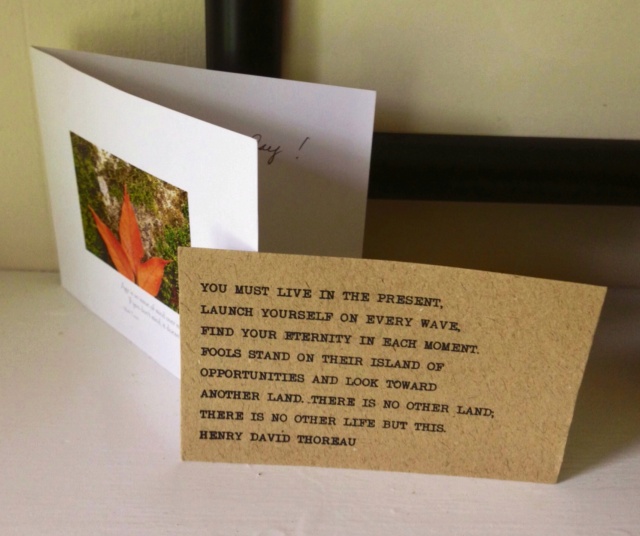 Because Mom was so perceptive and because I enjoy the live-in-the-moment sentiment so much, I’ll close this birthday-and-unbirthday post with the text:

YOU MUST LIVE IN THE PRESENT,

LAUNCH YOURSELF ON EVERY WAVE,

FIND YOUR ETERNITY IN EACH MOMENT.

FOOLS STAND ON THEIR ISLAND OF

OPPORTUNITIES AND LOOK TOWARD

ANOTHER LAND. THERE IS NO OTHER LAND;

THERE IS NO OTHER LIFE BUT THIS.

I am a rehabilitation counselor. I have many friends with autism and traumatic brain injuries. They help me learn new things constantly. I hike with dogs at the James River in Richmond - a lot. I've completed an Iron distance triathlon a year for 11 years. My most recent was in Wilmington, NC in November, 2013. I currently compete in mid-distance triathlons. And work and hike and take pictures and write and eat.
View all posts by Jay McLaughlin →
This entry was posted in Dogs, Flowers, Fun, People, Rivers, Smiles (including "dog smiles"!). Bookmark the permalink.

6 Responses to Birthdays and Bugs and UNbirthdays