This is (in part) a “race report.” From my experience at the Beach2Battleship 2013 Iron Distance Triathlon on Saturday, October 26, 2013, in Wilmington, NC. I don’t “race” in the conventional sense so this is not a race report in the conventional sense. My goal is to enjoy the experience (“Have a good time”) and get the most out of my day. Which I very reliably have every time I’ve completed Beach2Battleship – 2013 was my sixth in as many years. And I had a great time. Slow, but great.

My “run” in 2013 was a whopping 37 minutes (!) faster than 2012. My swim and bike were nearly 20 minutes slower each and when you add slower transitions, I only broke the 16 hour barrier by 2 minutes. A long day! But as always a joyful one.

Evelyn and I got to Wilmington on Friday (October 25) and went out for dinner at Rx Restaurant & Bar in downtown Wilmington. Rx is just across the Cape Fear River from the USS North Carolina Battleship – where the race gets ½ of its name. Our pre-race dinner was delightful. Not least because of a gracious couple and their young daughter who sat just across from us. The daughter was out late (perhaps she was five years old) and she was wearing owl pajamas. If you have pre-race anxiety (I have pre-race anxiety) or any other anxiety-variety, a well-mannered little girl in owl pajamas is the perfect antidote. Who even knew? Seriously, look at these things, could you imagine looking at them and feeling anxious? Seriously, no way, check this out:

Ev and I got up at 4:00 the next morning to race; we stayed at the Holiday Inn Express and were just ten minutes from the swim start. I went through all my pre-race anxiety reduction rituals which were as ineffective as they are every year. Some people may be better at this than me, but the only thing that reduces my anxiety is having the race finally start. It was clear and beautiful out which means cold, but it was a nice swim. The current wasn’t as helpful this year as it’s been some years and I swam an uninspired 1:20. But it was a pretty morning and I enjoyed starting my day in the ocean – it honestly is a great pleasure. I’d like to do it more often. Ev wasn’t out there – it’s pretty far out – and there are no pictures. Plus the race began at 7:30, 4 minutes after sunrise, so it was mighty dark. And did I say cold? Oy. 35º was the low temperature in Wilmington that day. And we swam in the ocean. What we were thinking I have no idea. The water was close to 70º though so it wasn’t awful once you got moving. The current was bland and it wasn’t my slowest swim ever, but it wasn’t great. I finished my swim in under an hour for four of my first five races at B2B so I was a little discouraged to get out of the water in 1:20. But it’s always nice to finish a segment.

Getting out and getting on the bike was cold but it didn’t feel bad because it was sunny. I was fooled by the lovely day and didn’t notice the gentle but persistent breeze. If you ride long distance a lot, wind like that is no big deal for an hour or two, maybe not even three or four. My ride took 7:14 (!) so the novelty had worn off long ago by the time I racked my bike in T2.

Being worn down physically that way wears you down as much – or more – mentally and I was in uncharacteristically low spirits when I began my “run.” But I was very characteristically checking on (not to say obsessed with) my time for the first mile. And extrapolating it over 26.2 miles, trust me, this is what obsessive people do. And balancing the way I was feeling against my time per mile and the distance remaining, a reasonable run time began to look achievable. So about nine and a half hours into the race, I began to feel better. I came to the first aid station, which was stocked with everything excellent, I looked down, there’s a row of little paper cups – this was five days before Halloween – filled with:

When there are no pleasant dining companions wearing owl pajamas in a fancy restaurant, little medicine cups filled with candy corn are… just what the doctor ordered! So fun. Anyway, I cruised along (I use that term loosely) for 6:45 (yes, that does mean I was “running” for six hours and 45 minutes) and crossed the finish line in 15:58. Fifteen hours, fifty-eight minutes. And glad to be done!

Sixteen hours-ish is slow. Believe me it’s slow, they’ll kick you off the course at seventeen hours, and the winner finished in 9:04. This year was my eleventh 140.6 mile triathlon in eleven years and I’ve never finished faster than fourteen hours. So I am clearly not in it for anything other than the experience. But the experience of spending the day outdoors with hundreds of like-minded healthy people, of moving non-stop under your own power for 140.6 miles is second to none. In my life, it’s not often that I feel more alive than I do during a long triathlon.

It’s still sublime to go back to the hotel and jump in the shower and collapse in the bed for the usual jagged post-race sleep. I should go to the post race brunch some year but I think as long as I race in Wilmington, I won’t. Because for all six years I’ve completed B2B, I’ve gone to brunch the following morning at Boca Bay in Wilmington and it is out of this world, every year. Go there next time you’re in Wilmington – I mean it. Except for this race and all the amazing people, Boca Bay is my favorite thing about Wilmington. There is, naturally, a caveat – the day before eating there I have burned, estimating conservatively, 10,000 calories. So of course it tastes great. But I know I’d enjoy Boca Bay any time – it’s a great restaurant.

I took this damsel fly picture down there a couple of days later:

Damselfly on a twig

Today (November 10) this turtle was sunning itself at PP. The first real Canadian cold fronts of the season are coming down this week, these I’m thinking are the last turtles of 2013 up here (in central VA): 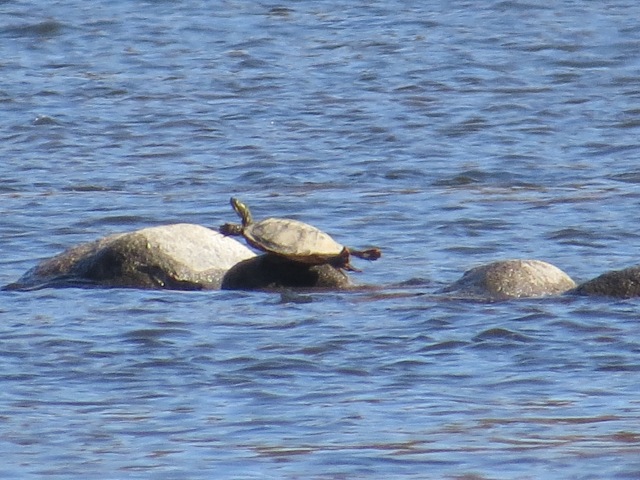 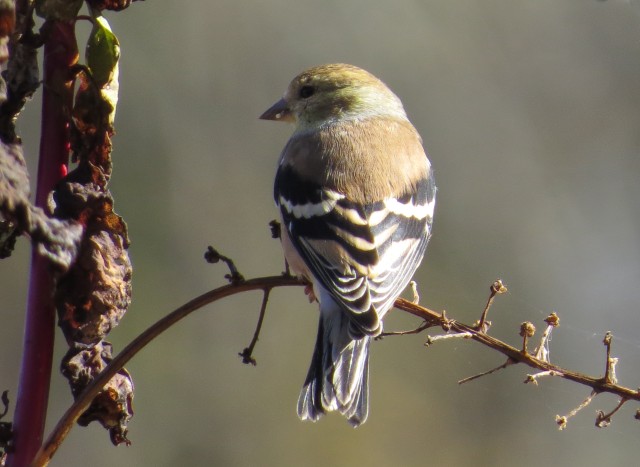 The moon was lovely this afternoon around 4:15: 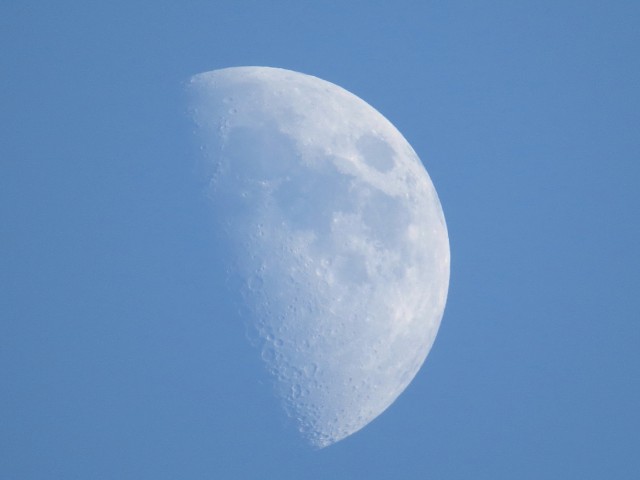 The light this time of year is wonderful: I took this picture of one of my neighbor’s trees from my driveway:

On these dry, clear days, high-flying jets leave crisp contrails. These two planes were nearly invisible to the naked eye. Their contrails were easy to see but the jets were just silvery dots. Here is a two engine jet zoomed in to 200x:

This is a four engine jet at the same time:

Enough for now. I hope to put up a new post quickly. Now that I’m relieved of the time constraints of swimming and biking and running every free moment. Have a great day,

I am a rehabilitation counselor. I have many friends with autism and traumatic brain injuries. They help me learn new things constantly. I hike with dogs at the James River in Richmond - a lot. I've completed an Iron distance triathlon a year for 11 years. My most recent was in Wilmington, NC in November, 2013. I currently compete in mid-distance triathlons. And work and hike and take pictures and write and eat.
View all posts by Jay McLaughlin →
This entry was posted in Endurance, Fun, Rivers. Bookmark the permalink.