The Art of Transformation

On Saturday Evelyn and I went to the Smithsonian to see Yoga: The Art of Transformation. The whole trip was fun; we rode Amtrak from Staples Mill Road to Union Station. Then a short ride on Metro to the Smithsonian to see the exhibit, it was a ton of fun. After we left we took Metro back to Union Station and had dinner at the Center Cafe Restaurant. Hopped back on Amtrak and came home – a great day!

If you’re interested in learning about the exhibit, it’s up there for three more weeks. Here is one article from the New York Times: Eons Before the Yoga Mat Became Trendy

And one from the Washington Post: Sackler’s ‘Art in Context’ lets participants practice yoga in the gallery

And a piece from CBS: The art of yoga

This was our train just before we boarded in Richmond:

When we got off in DC this old Amtrak switcher was shuffling cars around in the station. This one has 1,000 horsepower. For comparison, CSX regularly runs coal trains with single engines that have 6,000 horsepower. But this guy’s not moving any coal and there are no mountains in sight: 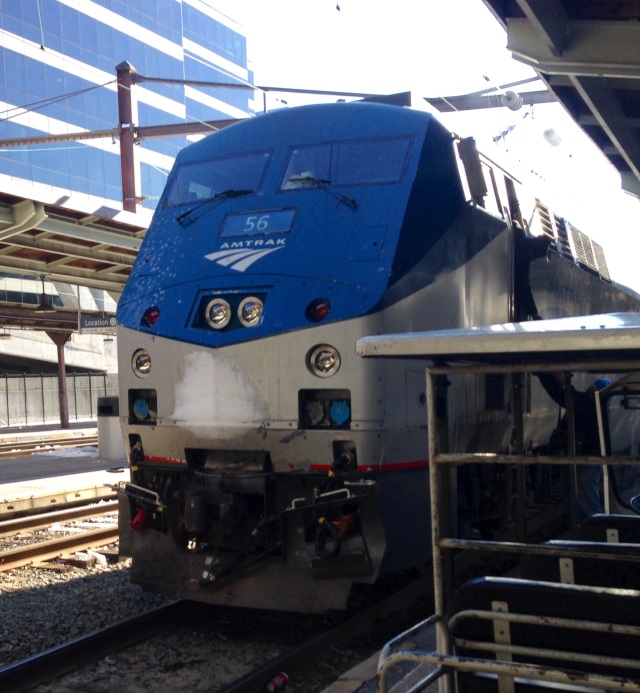 Another Amtrak P42DC, with a little snow, in Union Station in Washington:

Amtrak has canine units as well. I don’t know if these are bomb dogs or drug dogs or both. Hard to imagine they would do much in the way of crowd control. Ev’s friend with the German Shepherd wrote “What’s happened to the K-9 unit?… is that Lab an empathy sniffing dog?”: 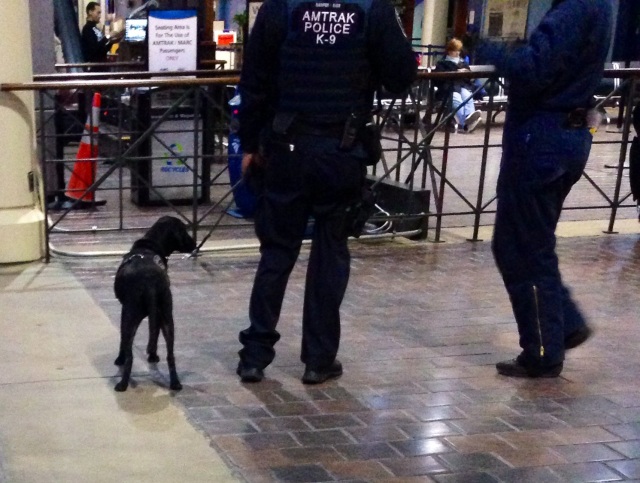 Sniffing for methamphetamine or empathy, and anything in between.

Perhaps the Amtrak officials looked at my name on our tickets. This was our departure gate:

Included in the price of Business Class tickets is personalized service:

When we walked out of the gallery and on to the mall, three high school students were sliding on the ice. We asked them to take our picture before it got dark: 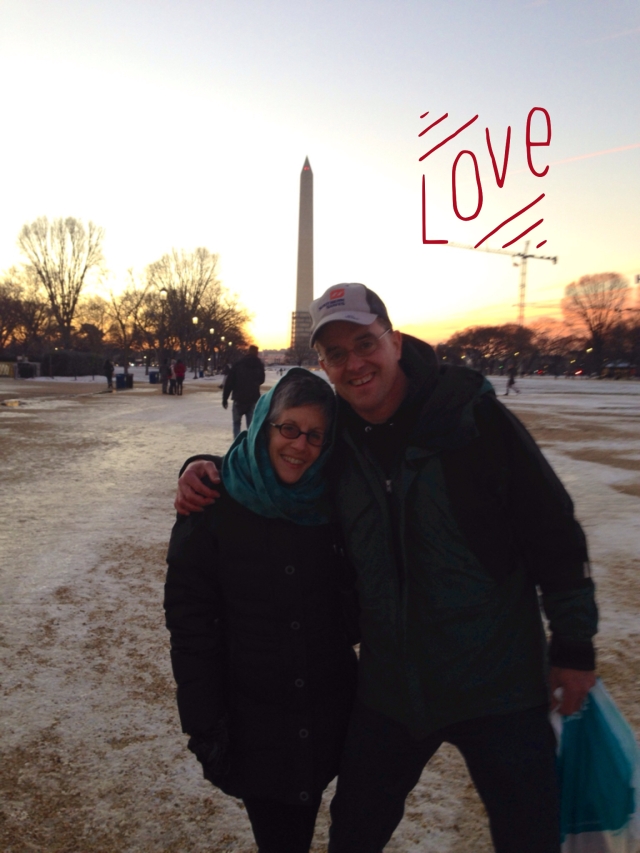 Amateur photographers are the best!

This is a blog post in three parts. Since my last blog post (December 31, 2013), I’ve taken a few pictures. As you may imagine. Evie and I went to Pony Pasture on New Year’s Day. There wasn’t much going on but it was pretty and we did see this cute pair of buffleheads doing synchronized preening:

Also this week I got a picture of a pretty female flying:

Turner, as some of you are aware, had stitches in his foot for some time. He got them out last week (by himself as it turned out) and the wound looks good. Today I let him off the leash for the first time. I think Mackey was more excited than Turner: 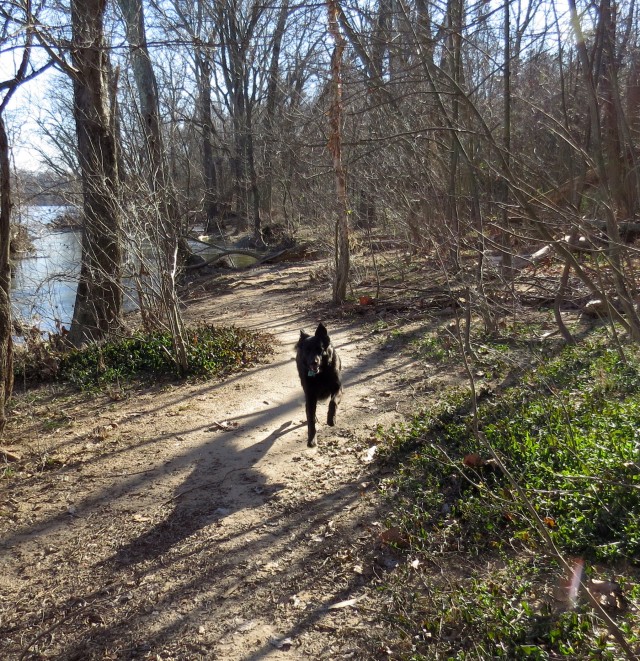 Hot dog on a cold day

But Turner was happy too:

ANOTHER hot dog on a cold day!

The first ten years I hiked at Pony Pasture I saw zero bluebirds. Now thanks to the efforts of Ralph and Nathan and the James River Park Service and many others, there are dozens. It’s just amazing. This one was puffed up on a branch:

Toasting in the sun on a chilly day

Better than most – starting at the cabin

From time to time in the past I’ve put blurbs on the end of blog posts. I’ll resume that in the new year. Starting with a vignette or two (hopefully more) about growing up with our cabin in Page County in Virginia’s Shenandoah Valley. Open letter to my brothers and sisters and Mom and any family friends who read this and have been to the cabin and would care to contribute: send me a note about something interesting or fun that you remember from the cabin. Pictures are great too. I’d love to expand this.

When (in my mind) you begin a long story, you have to find a place to begin. The choices are unlimited, but I decided our cabin was “better than most” when it comes to places to begin. So here we are.

We bought our cabin in April, 1974. I have a few pictures – and more than a few stories. My youngest brother Shane was five, my oldest sister Katie was fourteen, I was twelve. There were five kids in our family. All in school. And my Mom and Dad were in their late thirties. Amazing. We had the cabin for over thirty-five years and we never had a television there. Books everywhere but never a TV. There was always something to do outdoors, winter and summer. Since it’s winter now I’m thinking of this:

It doesn’t look like much in this picture but wow. When we had that thing going full blast the sides would get pink from the heat and you could hardly stand near it. We bought it at an auction for $20 and fixed it up. It was amazing.

I’m also thinking of this:

Sledding down the driveway

We hiked a lot and hunted a little and fished a tiny bit in the summer. We rode bikes up there from time to time and my sisters rode horses a lot. It was close to the South Fork of the Shenandoah River and our property had a common border with the Shenandoah National Park. We went to auctions and we raised our own hog and we slaughtered it with people who lived up there and raised their own. And we ate the ham and the sausage we made from it when you’re up there you eat it all. The lard and all the organs and the cracklins and what an experience.

This post is morbidly obese so I’ll need to stop until next time. If you’re here in central VA, enjoy the cold. Wherever you are, have a great day,

I am a rehabilitation counselor. I have many friends with autism and traumatic brain injuries. They help me learn new things constantly. I hike with dogs at the James River in Richmond - a lot. I've completed an Iron distance triathlon a year for 11 years. My most recent was in Wilmington, NC in November, 2013. I currently compete in mid-distance triathlons. And work and hike and take pictures and write and eat.
View all posts by Jay McLaughlin →
This entry was posted in Birds, Dogs, Fun, People, Rivers, Smiles (including "dog smiles"!). Bookmark the permalink.