It’s hard to come up with good titles…

Subtitle “What a copout”. I mean, seriously, was that the best I could do? Unfortunately it was. They say that good titles attract viewers and I’ve noticed they do. But some days are more creative than others and this day is a little bit less. Fortunately, I have a handful of good pictures. Another item that attracts viewers.

Also since the last post (“smile”, 19 January) didn’t use any outdoor pictures, I have a few to spare. I saw some ducks way out on the river and they looked like buffleheads so I snapped a few perfunctory shots on the off chance I’d get a winner. Buffleheads are hard to photograph because they stay way offshore and they dive all the time. When I looked closely at the pictures at home – they weren’t buffleheads! I still wouldn’t know what they were but I used a superb app from The Cornell Lab of Ornithology called Merlin Bird ID. The app calls them “uncommon” for this area. They turned out to be Lesser Scaup. Here’s a picture of a little flock I took at PP:

I was hiking at Pony Pasture a week or two ago with the dogs and heard a wren chattering away near the parking lot. I finally saw it flitting around the ice near the base of a dead tree. I was fortunate to click the shutter when she was coming out from under the ice!:

Refrigeration and A/C are strictly optional.

Clark and I were at the train tracks the other day. There are lots and lots of seagulls way up here on the river this time of year. They can be noisy and inelegant (like me) but occasionally graceful: 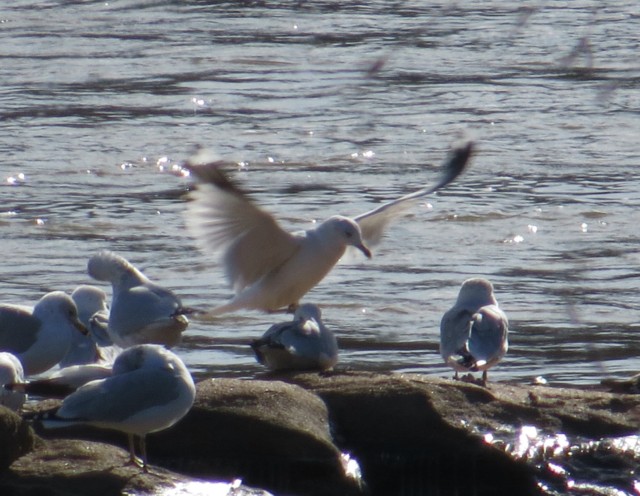 My sentimentality reveals my age; I was brought up in the “Jonathan Livingston Seagull” era.

I’m on facebook with a bunch of sled dog drivers in Alaska. They’ve been getting rain in parts of Alaska – in January. Meanwhile, here in the sunny south, when we got to the river on a couple of mornings last week it was 9º! No rain here. Mackey and Turner were happy to be wearing toasty fur coats. They were even happier when the lame photo shoot ended so they could start running!:

They’re very expressive. About not wanting to sit still on cold, snowy granite.

Another cold river image, but isn’t this beautiful?: 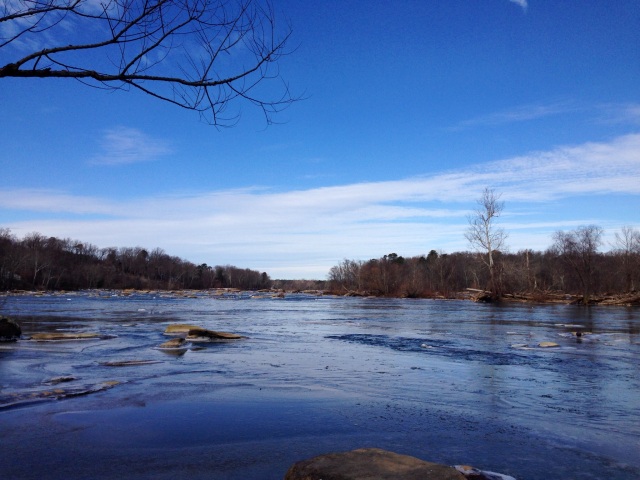 So cold and so blue but SO spectacular

I haven’t put up a movie lately. I took this brief (11 seconds) video at the river on Sunday morning. You can’t hear it in this video, but it was so quiet standing frozen in the snow on the riverbank you could hear the drifting ice scratching past the still ice. It was a singular experience:

A fun thing about this time of year when taking pictures is no leaves on the trees. It lets in lots and lots of light and you can see the birds more quickly. I heard a woodpecker last week but I couldn’t see it to save my life. Luckily my sharp-eyed buddy Ethan was able to see it – long before I was – and pointed it out. I finally managed to snap this picture an instant before it flew off. Ethan used Merlin Bird ID to make a correct ID even from this barely-fit-for-publication image. I’ll allow you to figure it out for yourself:

Can you identify him (or her?). Ethan did!

I’ll close (this part) with a picture. A friend sent a package recently. His name is Gus and he’s been my friend longest of anyone. We were in the same homeroom in freshman year of high school, close to forty years ago. He has two daughters and a son and he was at the post office with his oldest, Veronica. It was a big package and he handed Veronica his phone with a tiny picture of my family  from Shane’s wedding. He stretched the picture out and said “that’s Jay right there, put a quick sketch on this package.” He said this took her “about twenty-eight seconds.” Pretty fun. All best, 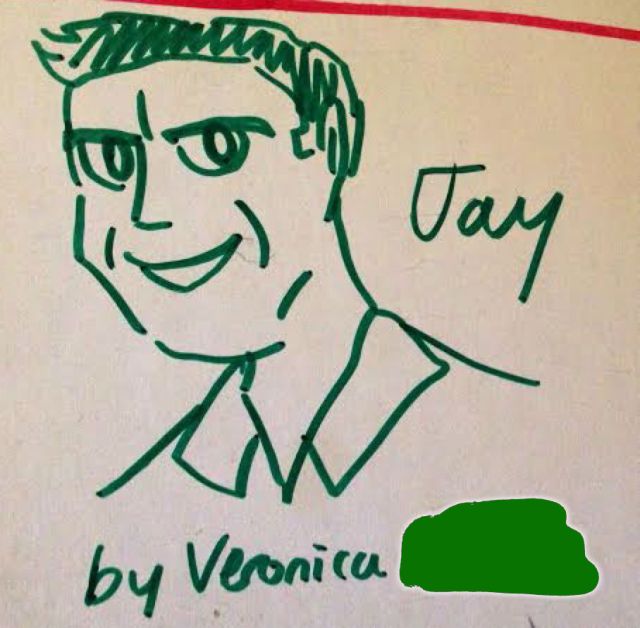 She is so talented. The ability to draw is one I am without.

My last blog post was called “smile” and it got a lot of views and a lot of nice notes. Including one from KD’s Mom! I’ve been very fortunate to know them for many years. I’ve spent time with lots of other people but never included a photograph. But I’ve written several brief stories about and included them on old blog posts. This blog is three years old and I’ve done a hundred posts. Here are a few that have stories about other people I know. You’ll have to go to the bottom of the posts to see the stories. There are great pictures too. If I do say so. I just (this moment) realized I’ve done over twenty of these little end-of-blog-post blurbs. So let me put the first five here. More on a future post:

I’d been blogging for a year before I did my first “add-on” or however you want to refer to it. The first one was about meeting people in the hospital, and my hazy recollections of my own view of the world from a hospital bed and an ICU and a wheelchair. And it was about working with other people with disabilities for the first time. I called it:

Remember – you have to scroll to the bottom of the posts to get to the “story” part.

Next I spoke a little bit about the first person with a disability who I ever regularly spent time with. That was in 1994, roughly twenty years ago. Evie and I had a nice visit with him and his family only last month! I mentioned him at the end of a post called:

The second person I met on this portion of my journey I spent time with regularly for fifteen years. He’s moved to NC to be closer to his mother but we cross paths a time or two every year. I mentioned him at the end of this post:

He too had a profound impact on me and I wrote more about him at the end of my next post. I see now by the date of that post that I wrote it one week before his thirty-third birthday. He’ll be thirty-five in about two weeks. When we first met he was fifteen. I’ve got a great picture of us at his sixteenth birthday party. My how time flies. The second post I wrote about him was called:

The next post was less about people I spend time with from day to day and more about people who influence me in other ways. None more of course than my mother and late father, but also an old (93 years at last count) buddy from the Y. That post is:

I am a rehabilitation counselor. I have many friends with autism and traumatic brain injuries. They help me learn new things constantly. I hike with dogs at the James River in Richmond - a lot. I've completed an Iron distance triathlon a year for 11 years. My most recent was in Wilmington, NC in November, 2013. I currently compete in mid-distance triathlons. And work and hike and take pictures and write and eat.
View all posts by Jay McLaughlin →
This entry was posted in Birds, Dogs, Fun, People, Rivers, Smiles (including "dog smiles"!) and tagged Autism, cerebral palsy, cp, disability, tbi, traumatic brain injury. Bookmark the permalink.