…especially about the future. – Niels Bohr

Colors are out now, lots of yellow, daffodils and forsythias and of course a few dandelions. Plus other colors. Next – in a week or so – comes pollen and smells, smells, smells. Of course there are already smells, at least at home, mainly hyacinths. But soon it will be lilacs, honeysuckle, multiflora rose, those little waxy white ones that I love, love, love. Inchworms appear soon too, and the buffleheads are already gone.

I have a few pictures of the bright colors. More soon, but here are a few to begin April.

I took this picture early in the morning on Wednesday, March 26, just as I was leaving the house to visit a buddy of mine. Not a colorful picture, but fun. This was at 6:24 AM, standing on my front stoop, facing almost directly east. It’s not a great picture, but neat in its way. The moon is the brighter object, near the middle of the picture on the right. It rose at 4:02 that morning. If you look almost directly in the center and lower down there’s another bright spot; that’s Venus. Sunrise that morning was at 7:06. Tomorrow morning (I’m writing this on Sunday, 6 April) the sun will rise here in Richmond at 6:46. It will rise earlier each morning until mid-June when it rises at 5:48. Venus and the moon:

I zoomed in on the moon at that exact time; this is how it looked:

I tried zooming in on Venus but my camera doesn’t do it any justice.

Spring is coming along quickly. I notice the changes with each  visit to Pony Pasture. I saw male and female buffleheads on March 27 and a few more on the 28th. I’ve been there several times in April and never photographed one so they’ve headed up to Canada for the summer.

This was a sharp looking male:

A distinguished male Bufflehead on the James

A beautiful female Bufflehead. She’ll be many miles north by the time you read this.

If you want to photograph ducks and not have it be a huge challenge, take my advice and stick with mallards. They pair off regularly, especially this time of year, and they dive only rarely. And the male’s green head is hard to miss. The females are graceful and elegant as well. Of course, this is not a great example of a mallard pair. There’s a blur from a slender twig between me and the male. The female’s reflection on the water is pretty:

A pretty pair of mallards.

We made it down for a few minutes on April 1; the flowers are blooming like mad. So far only the non-smelly variety. The good smelling ones will be out soon. Multiflora rose and honeysuckle when they come out will be overwhelming. In a good way. After you begin to see tons and tons of pollen (anywhere in Richmond) you’ll begin to see (and smell) the beautiful smelling flowers. Now in early April we have mostly beautiful looking flowers. In my yard we have hyacinths which are beautiful looking and beautiful smelling but no hyacinths at Pony Pasture. There are violets everywhere:

And these lovely little yellow flowers carpet the ground:

Petite and yellow and charming. Beyond that, I do not know. The name.

And these delicate little beauties:

I wish I knew the name! But seriously, do they really need one? It’s enough to see them.

We all know what that one is! A daffodil, just in case you don’t. Some of my friends call them jonquils.

And I believe we will not run low on Pony Pasture’s most prolific reptile anytime soon: 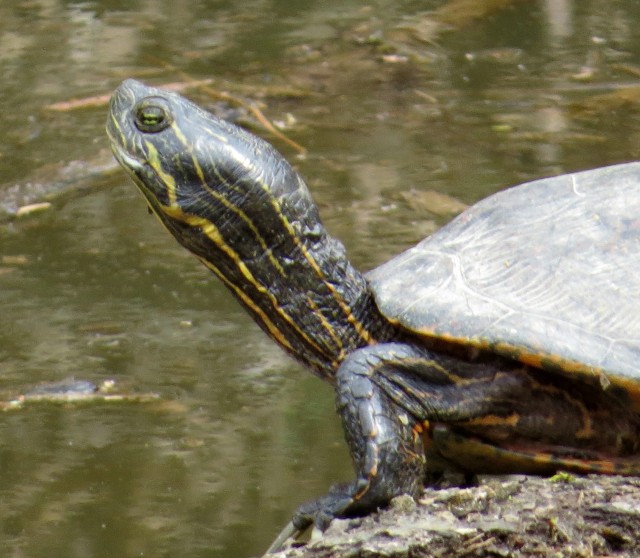 I automatically assume it’s a wise male. The truth is it may or may not be wise or male. Handsome though. Or pretty, if you prefer.

Any morning at Pony Pasture is the best morning to be there and spring comes up quick. We ducked in for a few minutes again on Thursday. This (I believe) is vinca. It’s invasive, but like many invasives (honeysuckle, my favorite) it’s very lovely. Evelyn thinks birds spread it. Which doesn’t really sound “invasive” but I am not an ecologist:

Our first Virginia Bluebells of the season; they are wildly prolific and soon they’ll be around every corner at Pony Pasture. Birds didn’t spread these; I watched Ralph White and friends plant them. But they’re a native species, so I suppose that makes them not invasive: 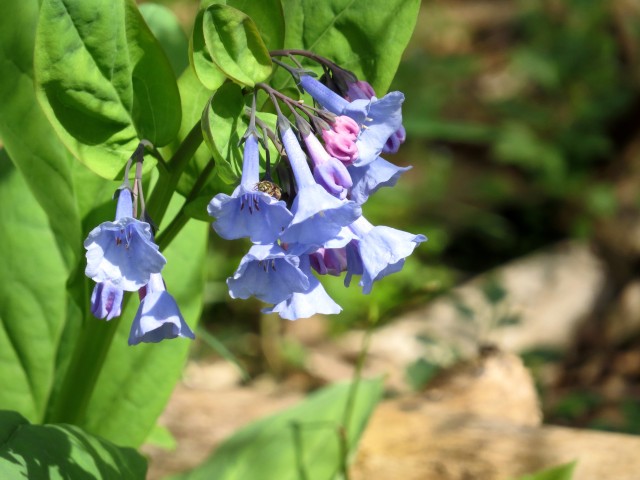 Virginia bluebells. Is that a little bug on the second one from the left? I believe it is.

There was even a swan on Thursday! This was way on the other side of the river so the picture is not lovely. But the subject matter is, and we don’t see swans very often at PP. It’s possible they’re invasive. This is not an area of expertise for me, obviously. I’ll read up on it. Meanwhile, enjoy:

A single swan. I am ill-informed about swans.

Turtles of course wherever we looked; sorry if this is too many. I like this look with the big claws and bright green moss. Plus they seem to have a little bit of attitude. That may just be me: 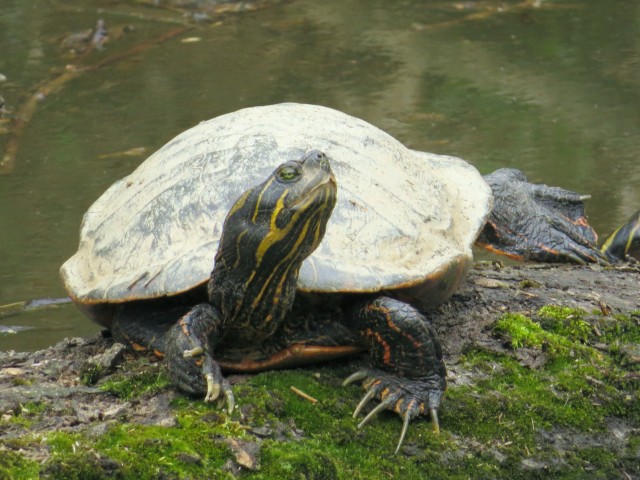 Can you detect an expression? I think I sense a bit of a swagger. I’ve been wrong before.

I took a picture of Turner seated politely on the trail that morning. Look how handsome and gentle:

He looks so elegant. Do not for one moment be fooled. He is extremely silly.

Later that day I was looking at the Richmond Police K-9 page on facebook. This picture was on the page and I showed it to a buddy:

Do you think that looks like Turner? Not in my worst nightmare.

My friend didn’t hesitate for an instant and said “Turner!”. Fortunately I have never seen Turner make that particular expression.

Yesterday was April 5, the 26th anniversary of my accident. Mom was on her way to visit Kevin and the girls and she stopped here on her way. She and Evie and I got together for brunch at the Westbury Pharmacy. It’s always a pleasure.

I didn’t take any pictures, but I did take advantage of the nice weather and squeezed in a pleasant twenty mile bike ride. There were forsythias and daffodils everywhere I turned. Spring rides are hard to beat.

This post is overrun with pictures (although under-run with writing, oops). So I’ll close now and put up another post soon. But this morning when Evie and Mackey and Turner and I were enjoying our Sunday river walk, we saw our first redbuds of 2014. Redbuds are my favorite early spring flower. Though they’re really a tree:

Redbuds on the verge of opening

Until next time, enjoy the weather (even when it rains tomorrow!). All best,

PS I learned yesterday that my favorite author died yesterday at the age of 86. His name is Peter Matthiessen and though he was extremely prolific, my lifetime favorite was The Snow Leopard. If I started a religion, that would be the bible. I may write about it in my next post.

I am a rehabilitation counselor. I have many friends with autism and traumatic brain injuries. They help me learn new things constantly. I hike with dogs at the James River in Richmond - a lot. I've completed an Iron distance triathlon a year for 11 years. My most recent was in Wilmington, NC in November, 2013. I currently compete in mid-distance triathlons. And work and hike and take pictures and write and eat.
View all posts by Jay McLaughlin →
This entry was posted in Birds, Dogs, Flowers, Fun, People, Rivers, Smiles (including "dog smiles"!) and tagged Dogs, Flowers, People, pictures of the moon, Pony Pasture, Rivers, smile. Bookmark the permalink.

5 Responses to Prediction is very difficult…