Guest photographer! (and MUCH more!)

Normally I only put pictures that I’ve taken myself in my blog posts. But earlier this week I was hiking at Bryan Park with my friend Ethan and we saw a snake! Ethan took a brilliant picture of it. A caveat first for readers of this blog – there’s going to be a scary picture of a snake! Ethan took a picture that would look great on the cover of National Geographic. Before we saw the snake (a Northern Water Snake) I took pictures of Purple Martins in the nesting boxes at Bryan Park. I’ll put one of those first so you snake-o-phobes have fair warning and can scroll past the snake picture. Should you be so inclined. Then it’s on to the blog post. Ending with a story about the summer camp my brothers and sisters and I attended when we were young.

Meanwhile – look at this Purple Martin!:

Now (snake-o-phobes, this is your opportunity to skip past this section) for Ethan’s incredible snake photo. Check this out!:

What an image! Better than any snake picture I’VE ever taken! Nice job, Ethan.

Farther down the creek in the same area we watched a cardinal hopping around on the rocks. I was lucky enough to press the button just as he was getting a drink:

A cardinal wetting his whistle

Of course I made it to Pony Pasture a time or two. I’m there so often, always with my camera, that it’s rare for me to get a picture of a bird I’ve never seen before. This week was an exception! When you hike in the same place all the time you know what birds are there and how they sound and how they move. You miss a lot of small ones but I finally noticed a new one on Tuesday. It’s called a Prothonotary Warbler. If you look at that link you’ll see a bird that looks different from this. I believe it’s a seasonal or regional or gender variation. E.g. the one at that link is a male and perhaps this is a female. I don’t know enough about them to tell, only that I do know this is a Prothonotary Warbler. On a website called The Warbler Guide (seriously) it says: “Warblers are among the most challenging birds to identify, with their seasonally changing plumages…”. But check this beauty out: 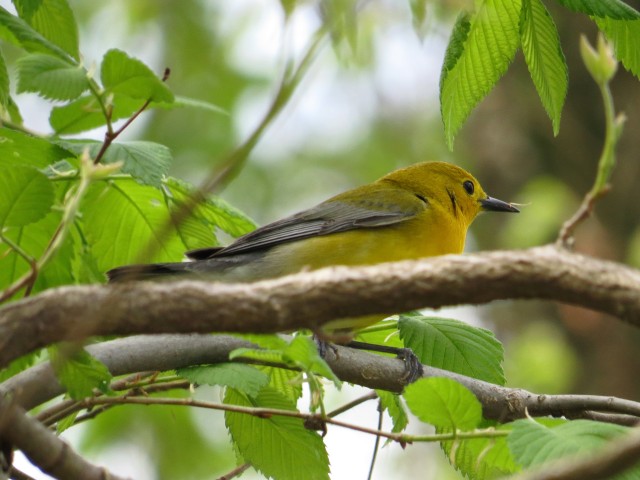 Prothonotary Warbler – I was lucky to get this picture!

On the same day I was hiking and there were cormorants on the river. They’re not my favorite birds, but sometimes they pose nicely. I took this picture on a Tuesday, but pretend it was a Sunday, and while you’re pretending, pretend that turtles go to church on Sunday, and pretend they go to church on a big rock in the middle of a river. And, let’s keep pretending here, that their preacher is a cormorant. Perhaps he was preaching the Gospel of Matthew, and the miracle of loaves and fish. To the multitude:

Later in the week I saw a hawk in the field. It’s not a great picture, but raptors are always photogenic:

Speaking of not great pictures, I took a slightly improved shot of our red maple. This still isn’t the one I really want but it’s getting closer: 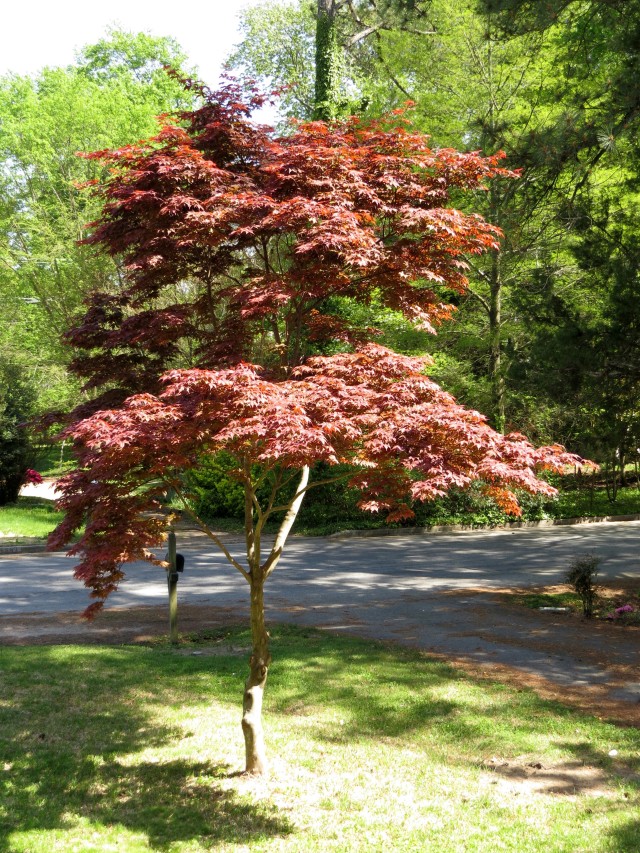 That’s the end of the first section for this week. For those who are following this, here are a few paragraphs about another great influence in my youth. Enjoy! Until next week,

I could write a hundred posts about the cabin, I could write as many about Camp. Once again I’ve consulted with my family for “origin” stories about Camp, e.g. when it all began. Sheila (my younger sister) began there in 1971. The rest of us may have started in 1971, or a year later at the latest. Shane was only three in 1971, and you couldn’t go to Camp until you were six, so he didn’t start right away. But I’m getting ahead of myself – some readers of this blog (assuming there are readers other than my mother) are not familiar with “Camp.” It has evolved into a different form than when we were younger, but it still has the same name and is in the same location. The same beautiful 200+ acres in the same rural section of northern Montgomery County, MD. Click on this link if you want to see where it is, and see its current form. The same family still owns it – and they owned it before my parents were even born in the mid-1930’s! Formerly “Camp Waredaca,” now: “Waredaca”

The Indian-sounding name gave it a mysterious aura when I was a child. It brought to mind images of tomahawks and teepees. It still makes me smile that this is how it was named: WAshington REgional DAy CAmp. WAREDACA. Isn’t that great? No marketing department came up with that one.

It wasn’t a day camp when we were there. Our parents dropped us off on Sunday afternoons and picked us up on Fridays. As early as possible on Sunday and as late as possible on Friday, if it was up to us – we loved being there. Mom and Dad were probably not broken-hearted to have us leave either. Although my guess is the house was really, really quiet when we were gone. The whole camp session lasted eight weeks, although we never stayed that long until we began working there. We stayed for either two weeks or four weeks when we were young.

We were campers through age fourteen. We continued at age fifteen as Counselors In Training or “CIT’s.” CIT’s didn’t pay to go to Camp and they didn’t get paid. They earned their keep – I earned my keep – by doing the work that neither campers or counselors had to do. That was where I really learned to wash dishes. Every meal at Camp was served to around a hundred people. Breakfast, lunch and dinner, always on industrial plastic plates, always with reusable plastic cups, and with genuine stainless steel silverware. A rotating pair of CIT’s washed every dish after every meal in giant stainless steel sinks in the kitchen. That’s one reason that hand washing dishes for two people never seems like a chore.

Another job as a CIT was cutting grass. Some fields were very big, many acres, all grass, and I’d get to cut them with the tractor. The same tractors as the ones pulling the wagons at the bottom of this post. I loved it. Maybe for the same reason I like swimming – you don’t talk to anybody and nobody talks to you. If you have anything to figure out, you can figure it out then.

There was never any air conditioning at camp. Young boys – up to I guess age ten or so – stayed in “cabins” that were made of plywood and had screen windows and screen doors –  and that was it. At around age eleven  on the boys side of camp we moved into military style tents reminiscent of the ones on M*A*S*H. I believe they were military surplus tents. We slept on military surplus metal cots, in the cabins or in the tents. Normally they were bunk beds. There’s a picture of one of those tents at the bottom of this post, and cots. I blurred the guys faces out but shoot me an email (or one of my brothers or sisters, or fb message me) if you want to see the original.

In hindsight, air conditioning and dishwashers and electricity were great things to not have at camp. Another great thing to not have was pavement – none anywhere, no tennis court, no swimming pool, nothing. And there were no showers and we swam in a lake and we took baths in the lake! We took baths with Ivory soap, because it’s the only soap that floats. We had a barn dance in a real barn – who even knew? – at the end of every summer. I’ll put a picture of that barn here too.

This is just an intro to camp. I’ll return to it in future posts. Although I don’t have a lot of pictures. You can send some if you want! In the future I plan to write about inspection, flag, assembly, reveille played (not by me) on a real bugle, taps played on the same bugle, sitting on logs at chapel, the sliding board tree, leather shop, craft shop, print shop, the rifle range, the buddy system, the raft test, the canoe test, campouts, flying, snapping turtles, tether ball, fishing, capture the flag, treasures, care packages, cartoons, the number of subjects is nearly infinite. Although I’d love to hear suggestions! All contributors will receive full credit for their ideas!

Last week was about the cabin, this week is about camp, next week will probably be about triathlons. I’ll be revisiting subjects each week. I’ll be back to camp soon and back to the cabin probably sooner. Come back next week! Until then, all best,

PS I’ll put all the camp pictures at the bottom of this post. Also, if you’re new to this blog, go to the archives (on the right) and click on a month you enjoy and look back at an old post or two. Some of them have fun pictures and stories. Pictures today from Camp:

This is the barn at Camp. It looked this way when I was first there in the early 1970’s. This is not a recent picture but I believe it still looks this way:

The barn at Camp:

Here’s a picture of a tractor at Camp. That’s one of the boys cabins in the background, I believe Cabin 1, for the youngest boys. I don’t know the precise year of this picture. 1975 is a decent guess. If you know better, please inform me:

A load of campers headed up for a meal. Is my guess.

This is the same tractor. I’m driving. That’s my brother Shane in the yellow hat. This might have been 1980. Again, I am uncertain, and welcome revisions, corrections, suggestions and updates:

Heading back to the Boys cabins. That’s Bunker Hill and Chapel in the background.

This third picture, I don’t even know if I was there. Maybe that’s Kevin driving or maybe it’s me, I can’t tell. It looks like a Barn Dance wagon ride because I see a tie or two and no shorts. This is taken from in front of Boys Cabin Two, facing the lake (where we took baths with Ivory soap, and swam and canoed,  etc.), and the main campus – where we ate and washed dishes, etc. – behind that:

Another wagon load heading out

I’ll close with a picture of one of the tents. There were usually as I recall three or four. Most were OD Green – not sure why this one is such an unusual color: 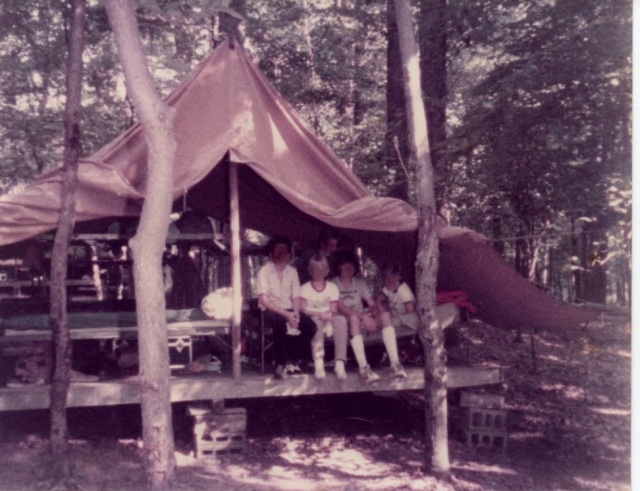 Just another afternoon at Camp. Maybe Rest Period or Inspection or who knows.

Hope you’ll visit next week! Have a great week,

PS If you know anyone from Camp (or anyone else) who you think may enjoy this, please pass it on.

I am a rehabilitation counselor. I have many friends with autism and traumatic brain injuries. They help me learn new things constantly. I hike with dogs at the James River in Richmond - a lot. I've completed an Iron distance triathlon a year for 11 years. My most recent was in Wilmington, NC in November, 2013. I currently compete in mid-distance triathlons. And work and hike and take pictures and write and eat.
View all posts by Jay McLaughlin →
This entry was posted in Birds, Dogs, Flowers, Fun, People, Rivers, Smiles (including "dog smiles"!). Bookmark the permalink.

10 Responses to Guest photographer! (and MUCH more!)