I heard an unusual racket coming from the underside of a bridge in downtown Richmond earlier this week. I looked up and there were dozens of swallows flying around dozens of mud nests. My buddy and I were watching trains downtown and we’ve been at the same spot week in and week out for years – and there’s never been a swallow or anything else nesting on that bridge. This was a treat: 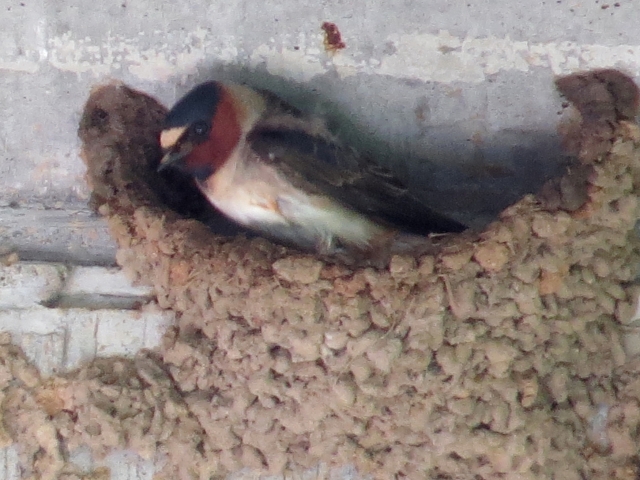 A Cliff Swallow on its well-constructed mud nest

Here are a few together:

A few birds together on a couple of nests

I’ll get more next week. There were maybe nearly a hundred nests. Very, very exciting. When I first saw them I assumed they were Barn Swallows, since that was the only swallow I was familiar with. Barn swallows flew alongside the tractor every evening at camp during the summer. I was sure I would have noticed the white spot on the forehead though, so I was surprised to see that and looked them up. I learned that these were in fact Cliff Swallows. I may have mentioned (I hope I’ve mentioned) a bird ID site called Birds of North America. I’ve subscribed to it (it is quite reasonable) and am learning a great deal about birds. Here’s a great quote from the introduction to the section about Cliff Swallows:

Doubtless the Lord—to paraphrase Lincoln’s aphorism—must love the Cliff Swallows, else he would not have made so many of them.

And I’ve been hanging around outdoors for fifty-two years and never even heard of them. Crazy. Glad I know what to look for now. Perhaps you’ve heard the expression (the song title) “When the Swallows Come Back to Capistrano” – those are Cliff Swallows! Also I’ll bet they kill way more mosquitoes than any backyard bug zapper. And their noise is much more pleasant. Speaking of pleasant noises. I didn’t know this – I admit my ignorance – until I wrote this post. Not even until the final edit! I just learned this – this minute. That “When the Swallows Come Back to Capistrano” is (among other things) the name of a 1940 single by The Ink Spots. Quite fun.

Speaking of spring animals. I was hiking at PP a few mornings ago and this guy was swimming in a puddle (these guys will also eat mosquitoes):

Soon to be a frog. I also took the time at PP to do a fun selfie. This is from far away: 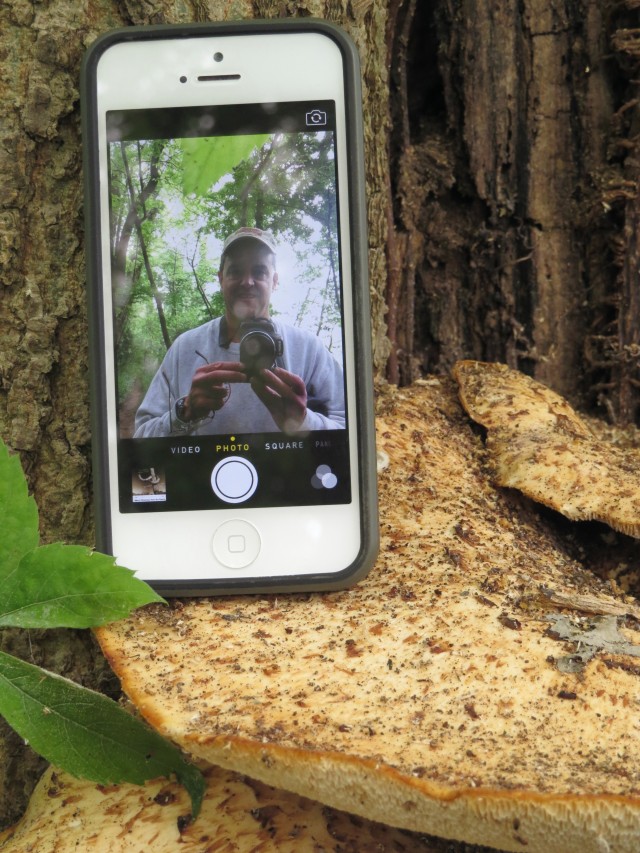 I had another birding experience recently that’s not quite as pleasant as discovering Cliff Swallows for the first time. I ride my bike at West Creek a great deal and there are two large lakes. There are herons and egrets and mallards but there is always – always – a large flock of Canada Geese. I’ve been seeing them for years – for decades now – and I often notice at least one with an unusual looking upturned wing. I finally googled it and learned it’s called “Angel wing.” I’ve read a lot of different articles about it and their hypotheses differ. But the consensus is it’s a nutrition problem of some sort. Crazy. This is a cell phone picture, I’ll get a better one with my real camera:

I have for most of my adult life not been the world’s biggest fan of Canada Geese. But I’ve lately been reading (as I mentioned last week) Aldo Leopold’s A Sand County Almanac and it’s heightened my sensitivity about a number of subjects. Canada Geese among them. Here’s a healthy young Canada Goose building up its muscles as it works against the current of the James River:

I’m learning (that’s my goal) as I write more regularly that sometimes the well runs dry. But it’s spring and no wells are running dry in central Virginia any time soon. I misjudged my timing and didn’t quite get to write as much on this blog entry as I’d hoped. I am, however, sticking to my “publishing” schedule and getting a blog post up for the sixth consecutive Sunday. My mom is away today – on Mother’s Day! – and so is my favorite editor, Evie. So all errors (as always) are my responsibility alone. Happy Mother’s Day, and I’ll see you next week,

PS Here’s a song for my mom, but you may enjoy it too: Mexico

I am a rehabilitation counselor. I have many friends with autism and traumatic brain injuries. They help me learn new things constantly. I hike with dogs at the James River in Richmond - a lot. I've completed an Iron distance triathlon a year for 11 years. My most recent was in Wilmington, NC in November, 2013. I currently compete in mid-distance triathlons. And work and hike and take pictures and write and eat.
View all posts by Jay McLaughlin →
This entry was posted in Birds, Endurance, Flowers, Fun, People, Rivers, Smiles (including "dog smiles"!) and tagged Barn Swallows, Cliff Swallows. Bookmark the permalink.

7 Responses to Swallowing my pride