Fortunately Turner began eating mulberries and reminded me how startling it is to live. I’d nearly forgotten. At nearly the same time, this quote appeared on – talk about startling – the Emily Dickinson facebook page. I mean, nobody saw that one coming. In the late 1970’s when I was reading “Hope” is the thing with feathers and Pain — has an Element of Blank. An Emily Dickinson facebook page. But here’s a fun image/quote: 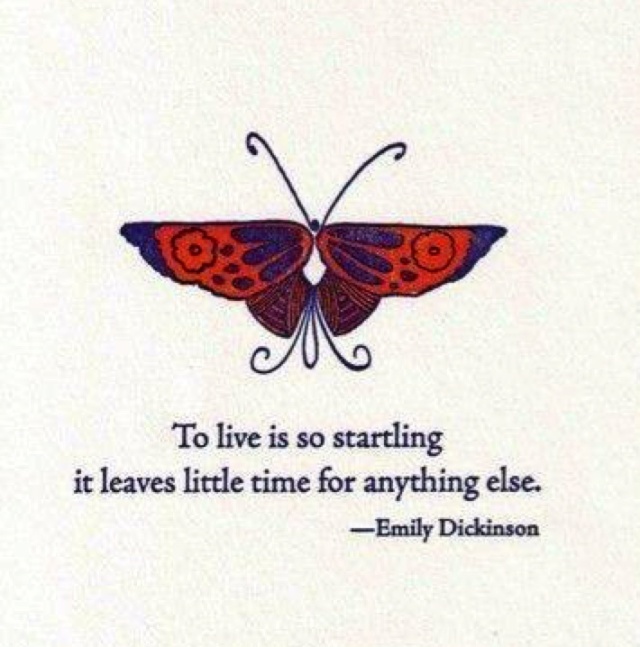 To live is so startling
it leaves little time for anything else.
– Emily Dickinson

I had been thinking that living wasn’t so startling. Then Turner began eating mulberries and once again I was reminded.

Turner likes his dog food as much as the next dog, and like canines everywhere craves cheese and peanut butter. They all love it. But Turner doesn’t stop there. He eats apples, bananas, mangos, carrots, nearly any fruit or vegetable you put in front of him. And every mulberry tree in central Virginia is dropping delicious fruit everywhere right now, including the one in our backyard. Turner thinks it was put there just for him. Richmond has mulberry trees everywhere; keep your eyes out. There are several in Pony Pasture. I took this picture of a mulberry beside the railroad tracks near Brown’s Island: 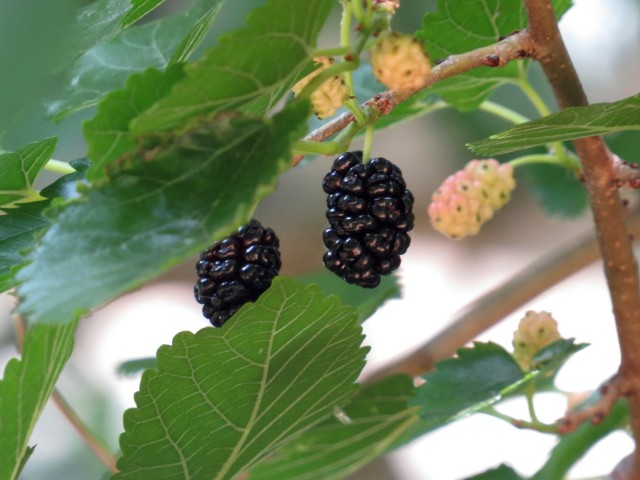 A delicious mulberry. Looks like a blackberry but no thorns, plus tastes much different. VERY easy to find in Richmond.

Meanwhile I was studying birds and learning more startling things. I was reading about crows. And learned this about nest predation: “…predation of eggs and nestlings greater in rural than in urban areas, probably because of… a lack of food (garbage) provided by humans presumably forced raccoons to search for natural foods (Chamberlain-Auger et al. 1990).” So mull that one over for just a moment – if people are neat and tidy, crow eggs are stolen by raccoons. If people are slobs, the raccoons have plenty to eat and they leave the crow eggs alone. That’s almost as fascinating (to me) as dragonfly larva who eat tadpoles who sometimes escape to become frogs and go back and eat dragonfly larva. I’m referring, if you missed it, to Autism 5k – you can read all about it there.

In other startling living news this week, Ethan and I were hiking at Bryan Park. That in itself is not startling, we do that a lot, and although we are often startled by reptiles and amphibians there, this week has been somewhat tame. Ethan got a nice image of a Great Blue Heron: 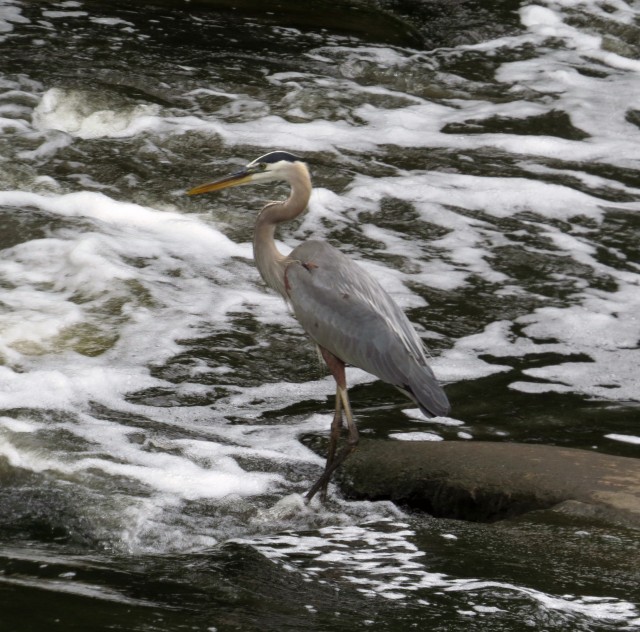 It is relatively un-startling to see a Great Blue Heron here in central Virginia in May, but it’s not always easy to take a nice picture like that one. Congratulations again Ethan!

What I found most startling was a bird on a wire. Because I think – I think – this is a baby phoebe. It looks young, and it was acting young – very unsure of itself. None of the “swagger” you notice in confident adults. Adult birds on a wire gaze knowingly about, eyes open for predators or prey. Baby birds I imagine are less confident in what will happen if they let go and cling for dear life. And are wide-eyed. And very cute:

A baby phoebe. I believe.

Speaking of birds (they are out in droves right now in Richmond) I’ve also been reading up on Mourning Doves. And learned a couple of startling (I’m enjoying that word this week) new facts. One is this: “Approximately one million hunters annually harvest more than 20 million birds, which exceeds the annual harvest of all other migratory game birds combined (U.S. Fish and Wildlife Service 2007).” [emphasis added]. That’s another one to consider for an extra moment or two. All migratory gamebirds – that is a huge category. Ducks, geese, plovers, rail, snipe, swans, it’s just an enormous category. There are a lot of mourning doves. Not unrelated, in the same vein, I learned another interesting mourning dove fact: “The Mourning Dove is a short-lived species, with an average adult life span of about one year.” Amazing. Think about those facts next time you see or hear a dove. I’ll get a picture in soon. It’s not difficult to get a photograph of a mourning dove, but it’s difficult to get one worth putting on a blog post. When I used to hunt doves (in the early 1980’s) I learned how difficult they are to shoot. And how delicious to eat. With a camera it’s much easier.

Here’s a picture that’s interesting (again, I mean interesting to me, that doesn’t apply to everyone). It’s Mackey at the far eastern edge of Pony Pasture, not long after one of our recent floods. This is about ten minutes walk up from the river bank. Notice the mud line behind Mackey. That’s how high the river rose when it flooded. That mud line is when the river floods to about fifteen feet deep. This morning it was a little bit over five feet deep. During most of the summer it will be around three or four feet deep. During Hurricane Agnes in 1972 the James River here in Richmond rose to 28.6 feet deep! So look at the mud line in this picture – that is a fifteen foot flood, and the water goes in the parking lot. And think about the water being thirteen feet deeper than that. That is startling: 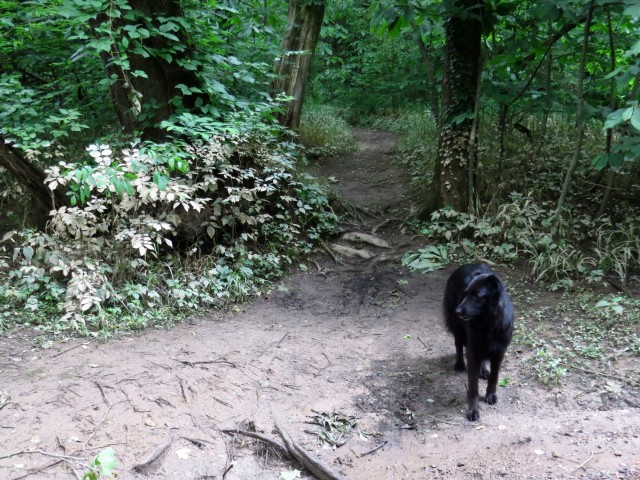 Mud line on the leaves on the left side, Mackey to the right.

Like all good things, I believe honeysuckle is coming to an end in Richmond for 2014. Although I may be wrong; I haven’t paid close attention before. But here’s a gorgeous picture I took this week. Also the good thing about honeysuckle is, it’ll be back next year, like it or not: 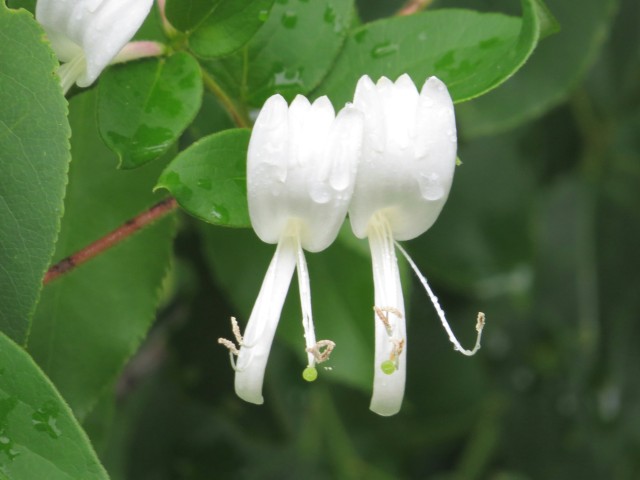 At one time lush and graceful.

The cliff swallows are still looking good. But I have a lot to learn about them. Probably a few years. But this was earlier this week: 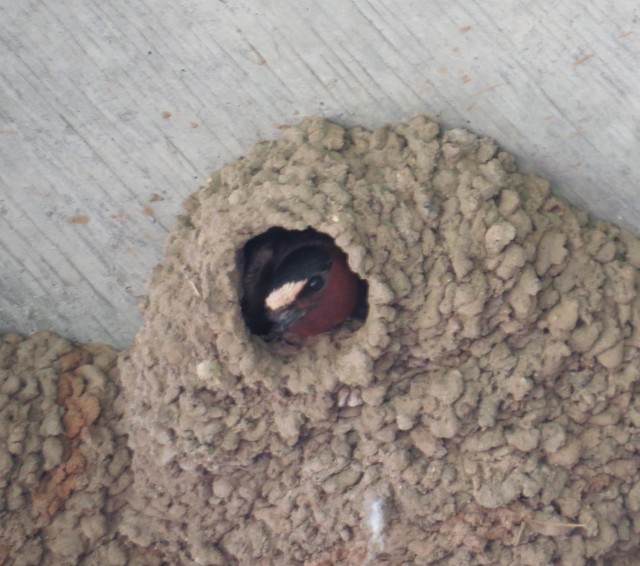 I’ll bet that nest is a nice place to be.

This picture doesn’t have a lot of significance, I just like the way it came out. It’s a thistle down by the train tracks: 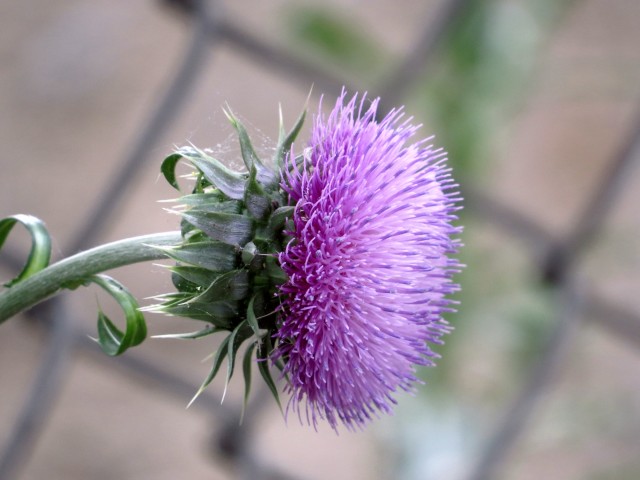 Thistle by the train tracks

I believe that’s enough pictures and writing for this section of the blog for this week. I only have a little blurb on the next section. I’m gradually getting into the habit of a post a week, and enjoying it. Since life is still so startling. I hope yours is too!

Trains and chocolate and honeysuckle

This is an iphone picture (less than stellar quality) from this week. I photograph lots of engines but I’ll take some more rolling stock pictures. This was a CSX coal train parked downtown waiting to switch crews: 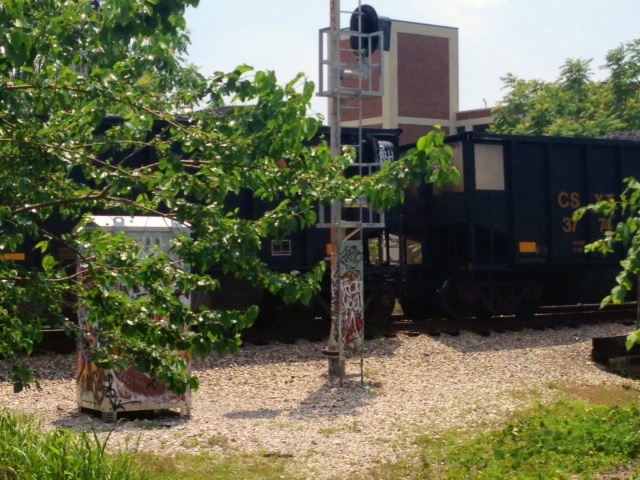 I was speaking with one of my brothers recently about our upbringing and he sent me an email about Maya Angelou and her memoirs. My friend Clark and I were on a gravel road next to a parked coal train. With the river in sight. At the cabin in the seventies and eighties, the railroad tracks (at that time, the Norfolk and Western, a.k.a. the N&W) and the South Fork of the Shenandoah River were the background for a lot of what we did, winter and summer and in between.

That’s a fun N&W link, it has great pictures of N&W diesel locomotives of the era when we were at the cabin a lot. It merged with the Southern Railway in 1982 but the merger wasn’t complete until 1997. So there were N&W locomotives and rolling stock (lots of coal cars) around during our most active years at the cabin. Freight trains, especially coal trains, always call to mind those years.

I was hiking with Mackey and Turner at Pony Pasture this morning (what a surprise) and since it was June 1 I was taking pictures of honeysuckle again, since soon it will be gone until 2015. And I love honeysuckle. But I was also thinking about clinging to things that are going away no matter how hard you cling, and that it’s better to let go and enjoy the moment. That (in my travels) is the whole point of looking at the river. Because it’s always going away but it’s always arriving and it’s always just right. That’s why they call it the present. Anyway, taking pictures of the honeysuckle so it won’t go away reminded me of a passage from my favorite book, the late Peter Matthiessen’s Snow Leopard. He’d been in the wilderness in the Himalayas for two months and was preparing to return home. He wrote “With the wind and the cold, a restlessness has come, and I find myself hoarding my last chocolate for the journey back across the mountains – forever getting-ready-for-life instead of living it each day.” When I’m trying to get pictures of the “last” honeysuckle of the year, I feel like I’m “getting-ready-for-life” instead of being in the moment. That being said, I don’t just enjoy honeysuckle – or birds, for that matter – I enjoy the experience of photographing them. And even of looking at them on my computer and of posting them on my blog. I hope you do too! All best, 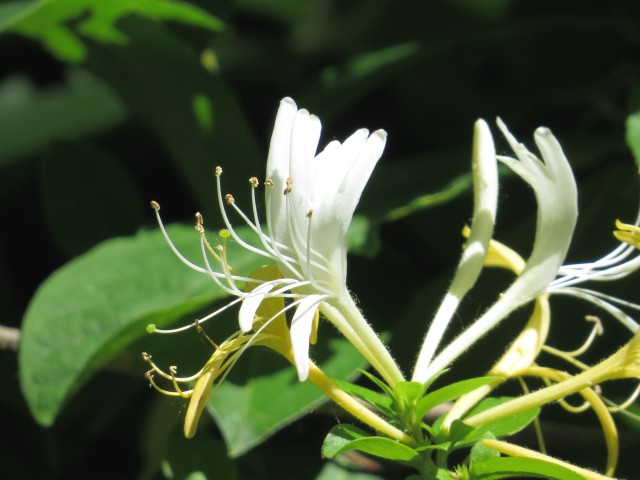 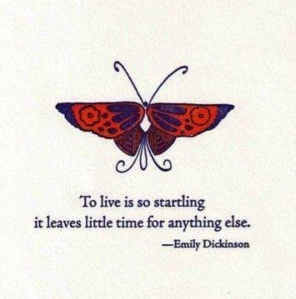 I am a rehabilitation counselor. I have many friends with autism and traumatic brain injuries. They help me learn new things constantly. I hike with dogs at the James River in Richmond - a lot. I've completed an Iron distance triathlon a year for 11 years. My most recent was in Wilmington, NC in November, 2013. I currently compete in mid-distance triathlons. And work and hike and take pictures and write and eat.
View all posts by Jay McLaughlin →
This entry was posted in Birds, Dogs, Flowers, Fun, People, Rivers, Smiles (including "dog smiles"!), Trains and tagged bryan park, nature, outdoors, People, Pony Pasture, Rivers. Bookmark the permalink.

3 Responses to So startling