I just couldn’t resist that great name. That’s the actual name of a dragonfly I photographed this week – it’s called a “Halloween Pennant (Celithemis eponina).” Have a look:

I was most interested in “Pennant” – I’d never heard that before. When I googled it, I read that  “…this dragonfly gets its name…when it is perched on the very tip of a stalk of grass and is blown about by even the slightest wind.” Just like a pennant! Just like in the picture I was fortunate enough to take. Very interesting. Other broad categories of dragonflies are called skimmers, hawkers, darters, darners, chasers and more, largely based on a frequent behavior of the dragonflies in each category. “Pennant” – it wasn’t intuitive. But when you see the picture I took – on my first try – it’s easy to see where the name comes from.

The “Halloween” part of the name I suppose comes from the coloring. Very autumnal even though it’s still mid-summer. All that bright orange and brown. The “Pennant” part also I suppose comes from the fact that they’re more still water insects than flowing water. I took this picture on the edge of one of the two ponds at West Creek Business Park. Not near the river where I do most of my photography.

I wasn’t at West Creek to photograph dragonflies that day – I wasn’t even there to take pictures. I was there riding my bicycle and I’d seen the first killdeers of the year running around the edge of the lake. The pictures I’m embarrassed to say were awful; here’s the best one:

Notice the second half of the scientific (“binomial”) name? “Vociferus“? There is no such thing as a quiet killdeer. Even their common name (“killdeer”) is because of the sound they make.

I promise there will be better killdeer pictures soon. They’re charming birds and quite attractive. It’s funny that I was trying to get the killdeers and although I missed them I ended up with a new dragonfly. Another thing that surprised me right there – right on the edge of that lake – were large mussel shells scattered all along the shoreline. They don’t photograph particularly well (in my opinion) but here’s one for an idea: 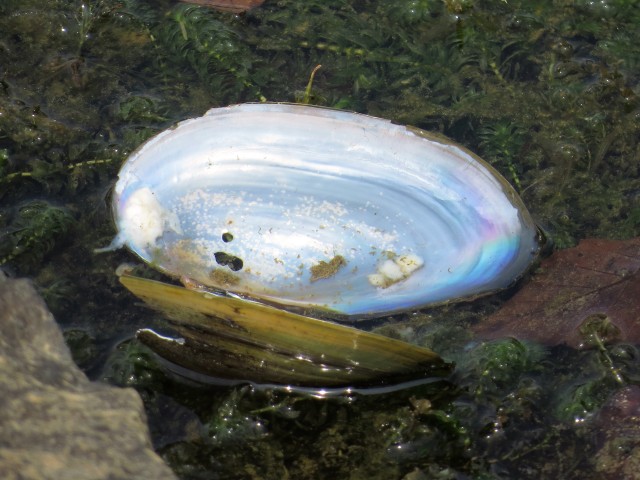 Freshwater mussel – some lucky raccoon has been dining on seafood

Flowers in August are getting few and far between but the ones left are showy. A few yards from the killdeers and the mussel and perhaps directly underneath the Halloween Pennant was this puffy white flower with a bee inside:

The FIRST flower with a bee inside I photographed today

According to the time stamp on my camera I took that at 11:13 AM on Thursday at  West Creek. That afternoon I went hiking at Pony Pasture – 10 miles east of West Creek – with a buddy of mine. Flowers were blooming next to the water there. On the next picture it’s the same day and the time stamp says 3:51 PM. Look at this flower with a bee inside: 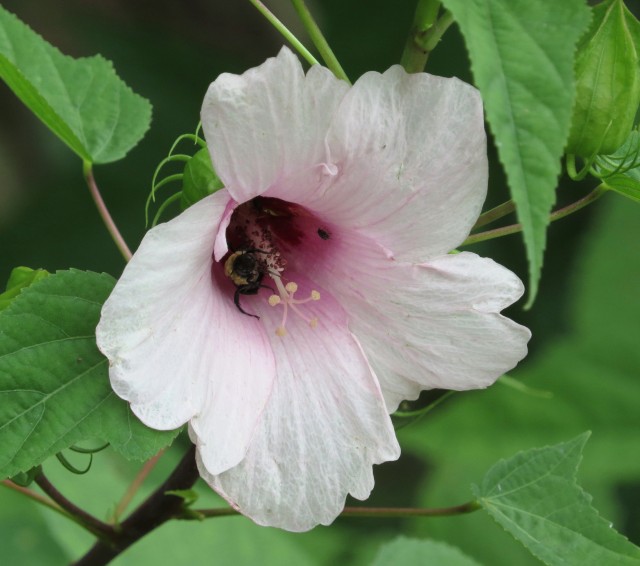 The SECOND flower with a bee inside – the same day.

On my way to the Y, I stopped in a neighborhood near me to photograph these yuccas. Always elegant:

Speaking of elegant, Evie bought this plant in a much more bedraggled condition several years ago for ninety-nine cents. She nursed it back to health and it looks graceful on our mantle with the morning sun lighting it up: 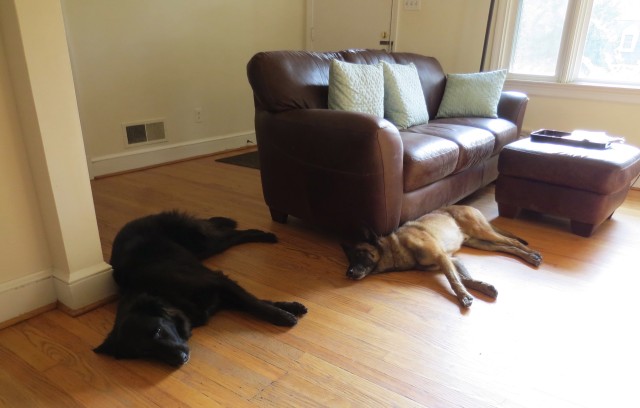 Slackers. I’m sorry, there’s just no other word to describe them.

Mackey and Turner get far too much attention. But they’re dogs; that’s just the way they are. I have a cat as well, “Dash.” He lies around too, but he’s not a slacker. Look at this guy – he lies around with personality:

See what I mean? Dash lies around actively.

Not a huge post this week. I hope your week is a great one and I look forward to seeing you here again (hopefully!) next Sunday. Until then,

PS A picture I took at Pony Pasture one morning this week: 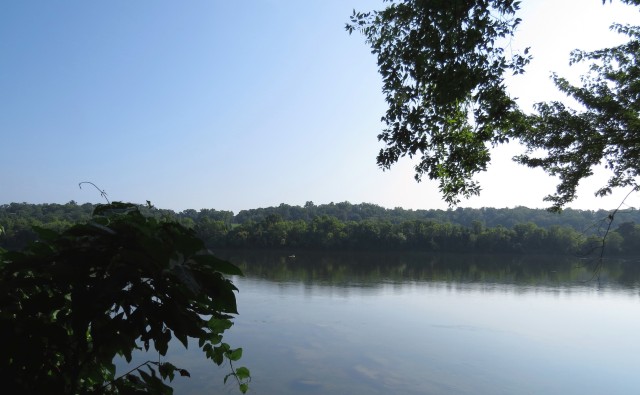 I am a rehabilitation counselor. I have many friends with autism and traumatic brain injuries. They help me learn new things constantly. I hike with dogs at the James River in Richmond - a lot. I've completed an Iron distance triathlon a year for 11 years. My most recent was in Wilmington, NC in November, 2013. I currently compete in mid-distance triathlons. And work and hike and take pictures and write and eat.
View all posts by Jay McLaughlin →
This entry was posted in Birds, Dogs, Flowers, Fun, Rivers and tagged Dogs, Flowers, Fun, Halloween Pennant, nature, outdoors, Pony Pasture, Rivers. Bookmark the permalink.