I turned fifty-three yesterday and the party began Friday evening at Boka Kantina just a mile from home:

Birthday boy with the Boss of Boka (Kiki)
The party that never ends was just beginning. Thanks for the picture Evie!

I woke up yesterday morning when the dogs woke up (they get up early on my birthday… and every other day). When I checked my email I found Evelyn had sent this superb book:

Transcript of an interview with my favorite author, published posthumously. Thanks for the perfect gift Evie!

I downloaded it to my ipad and read it once yesterday and began it again. I’ll probably finish it before dinner tonight and go around at least one more time. If you are a fan of the late David Foster Wallace or if you enjoy reading or writing, I cannot recommend it highly enough. You owe it to yourself. It’s the transcript of a one hour interview. He is among my favorite authors. When he committed suicide six years ago at forty-six years old I’d never been as sad about the death of a complete stranger. It was nice to “hear his voice” again as I read, and I hope learn a bit more about writing clearly and about thinking clearly.

Our neighbor’s daughter was in the Children’s Theater of Virginia’s production of the Shrek Style Showcase at Willow Lawn on my birthday and they invited Evelyn and me to the show – and it was fantastic! We saw it at 2:00 yesterday afternoon and it was the final show in that run – so you missed it! But look on their web site and catch another show – it’s a treat. Here are a few pictures from the show: 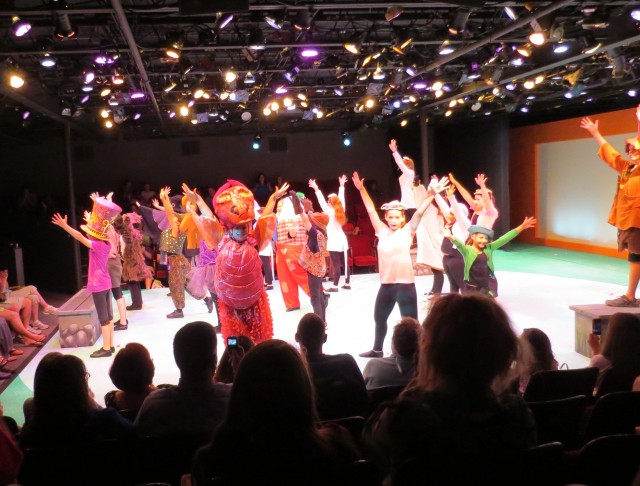 Please forgive the quality of those pictures. I almost never take pictures indoors and I almost never take pictures of people. So I have nearly zero practice with either one. My lack of experience shows. But the experience of watching the live production was a unique gift and perfect for my birthday. That’s a perfect gift – no one else can give it, environmentally friendly, the only one of its kind. How can you improve that? I’ll tell you how – you can’t! Thanks Nora and Lee and Kara!

Last year on my birthday my friends took me to brunch at Portico Restaurant in still faintly rural southeastern Goochland County. It was so great we did it again this year and we were well rewarded. It was the same crew as last year except our old friend a.k.a. Luigi was, to quote him, “…not lost but wandering the Brooklyn desert…”. Your guess here is as good as mine. Hopefully he’ll join us in 2015! Sara was our waitress last year and she helped us again this year. Last year’s late August weather was sweltering, and we sat indoors in the air conditioning. This year was nearly cool; it felt more like October than August. We sat outdoors and it was delightful. Sara graciously took our picture:

A few pictures from this week. I’m slowly learning to photograph these “old” moons, that is when they’re past full and shrinking every day. Photographing them is no different than photographing other phases of the moon. Except they’re up early in the morning rather than in the evening. I took this one at 5:40 AM on Wednesday (August 20):

This is out of order. But I took a bunch of pictures in the garden at Portico. It’s just beautiful, you should really visit. I was surprised to see a dragonfly! This picture turned out well:

What a beauty! And no river in sight!

Evelyn and I often admire the attention to detail at Portico. It’s always trim and tidy, including and especially the groundskeeping. This is a sundial from the garden. I’ve seen dozens of sundials and close to 100% of them are ornamental. This one was ornamental too – but look at the time. That’s about as close to 4:00 as a sundial can get. The time stamped on the picture? 4:02 PM. Ornamental and functional!:

A sundial showing the precise time!

Their flowers are so well cared for. Look at this nasturtium:

And this day lily:

There were more – I had to stop myself! What a treat in late August.

Since I’ve been reading Quack This Way I’ve been thinking a lot about the way I spend time in my life. What I choose to spend each of my particular twenty-four hours doing. The choices I make today and the way those choices have been informed by my upbringing. I’ve mentioned in earlier blog posts that the three most impactful environments in my upbringing were (in random order) Camp Waredaca, our cabin and Gonzaga. There was no electricity at Camp, so no television. The only  two things mom and dad didn’t allow at the cabin were 1. a television and 2. a telephone. Things were a lot different then; there was no cable television and no cell phones. Spending so much quality time during my youth with no television made me comfortable without one now. It forced me outdoors a lot and it continues to do that.

These are not well-formed thoughts and thus not ready for publication. I’ll read Quack This Way a time or two more and get this all together.

I’ll close with a picture from the river this morning. And I hope you have a great week! All best,

PS This birthday was a multi-day/multi-event celebration. I kept thinking of a 1989  song by Robert Earl Keene called The Road Goes On Forever. It has eight verses and each verse ends “The road goes on forever and the party never ends.” “The party never ends” has been going through my mind all weekend – it was the automatic title for this blog post.

Wait! I had one other picture this week I really enjoyed. It’s a “nature” shot – it’s a water strider – but I took it from a bridge about six feet above looking straight down. And although it’s clearly a bug on water, it almost looks a bit surreal. The idea of standing on water held up by surface tension alone is fascinating:

Sometimes we walk in air, sometimes on sunshine, this insect is walking on water. Maybe just standing there.

NOW the picture from the river this morning: 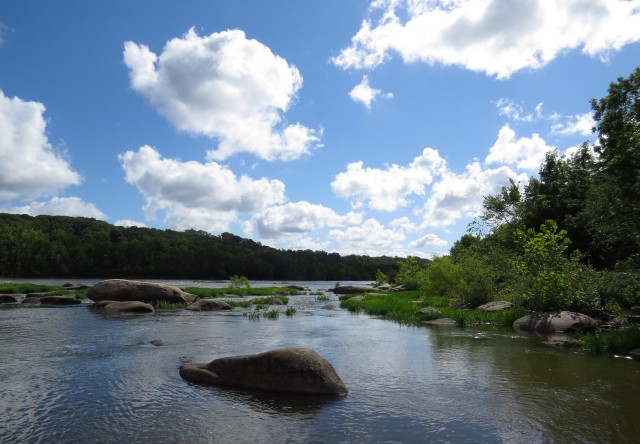 That river could not possibly be any more gorgeous

I am a rehabilitation counselor. I have many friends with autism and traumatic brain injuries. They help me learn new things constantly. I hike with dogs at the James River in Richmond - a lot. I've completed an Iron distance triathlon a year for 11 years. My most recent was in Wilmington, NC in November, 2013. I currently compete in mid-distance triathlons. And work and hike and take pictures and write and eat.
View all posts by Jay McLaughlin →
This entry was posted in Flowers, Fun, People, Rivers, Smiles (including "dog smiles"!) and tagged Fun, james river, nature, outdoors, People, pictures of the moon, Pony Pasture, Rivers, smile, Smiles - human AND dog smiles!. Bookmark the permalink.

1 Response to The party never ends