When I woke up this morning I knew I was going to write a blog post and I had a few pictures. But no title and/or theme. Even after we returned from a superlative hike at Pony Pasture this morning I remained title and/or themeless. I have a big picture front window with a bird feeder on it and the window was filthy. So I took out my ladder (after LOTS of procrastination) and began cleaning. I don’t clean windows often – trust me – and when I did I recalled a 1982 Van Morrison song called Cleaning Windows. If you’re unfamiliar (or if you’re familiar) and interested, click this link; it’s just under five minutes long: Van Morrison – Cleaning Windows

Here are the lyrics to Cleaning Windows:

Oh, the smell of the bakery from across the street

Got in my nose

As we carried our ladders down the street

With the wrought-iron gate rows

Bought five Woodbines at the shop on the corner

And went straight back to work.

Oh, Sam was up on top

And I was on the bottom with the v

We went for lemonade and Paris buns

At the shop and broke for tea

I collected from the lady

And I cleaned the fanlight inside-out

I was blowing saxophone on the weekend

In that down joint.

I’ll see you when my love grows

I’m a working man in my prime

I heard Leadbelly and Blind Lemon

On the street where I was born

I went home and read my Christmas Humphreys’ book on Zen

Kerouac’s “Dharma Bums” and “On The Road”

I’ll see you when my love grows

I’m a working man in my prime

Anyway, it evolved from there. I was standing at the foot of the ladder – this is a true story – and I pulled out my phone and googled the song and found that video and posted it on Facebook. A while later I saw a “comment” with the picture and my friend Justin had posted a video of the song The Window Cleaner by George Formby from 1936 movie called Keep Your Seats, Please. Even if you skipped the Van Morrison video, you owe it to yourself to watch this 1936 ukulele classic: George Formby – The Window Cleaner.

THAT song – this is all just too much fun – contains these lyrics:

“To overcrowded flats I’ve been,

Sixteen in one bed I’ve seen,

With the lodger tucked up in between,

Now lots of girls I’ve had to jilt,

For they admire the way I’m built,

– Banned by the BBC: “The Window Cleaner“, second recorded version[5

This is a quote from a book about Mr. Formby: “The film contained the song “The Window Cleaner“…, which was soon banned by the BBC. The corporation’s director John Reith stated that “if the public wants to listen to Formby singing his disgusting little ditty, they’ll have to be content to hear it in the cinemas, not over the nation’s airwaves”…

When I was showing the draft of this post to Evelyn she commented that there’s a song for everything. I concurred. And since the window is clean: I Can See Clearly Now, Johnny Nash/Jimmy Cliff

Blog posts like this one just evolve. Because I was reading the lyrics to the Van Morrison song and this line caught my eye:  “I went home and read my Christmas Humphreys’ book on Zen.” I’m familiar with eastern thought, primarily Thich Nhat Hanh, Eknath Easwaran and of course HH The Dalai Lama. And Peter Matthiessen and Robert Thurman but I’d never heard of Christmas Humphreys so I googled him. And found a book (found a bunch of books, but settled on one) called Essays in Zen Buddhism. I bought it for my Kindle and I’ve already begun reading it. Think about this string of events – because my front window was filthy.

Now – for a few pictures from this week. Snake-o-phobes – I know there are a few of you out there – be forewarned: a little ways down this page, there will be a picture of a Northern Water Snake. Not as great as the one Ethan took earlier this year – that one was amazing – but very unmistakably a snake. Don’t say I didn’t warn you.

I was hiking next to the canal behind Starbucks this week and was startled to see another Longnose gar:

Longnose gar swimming in the canal behind Starbucks River Road

It was earlier that day when I saw the snake (thanks for the ID Kim!). When I first saw it, it was swimming in a creek – fully submerged. I watched it crawl out of the water and go up the bank. I took about a million pictures and some are kind of cool. But out of deference to my snake-o-phobic viewers, I’m using a “tame” image, although I think you true phobics might just skip over it anyway. But here it is, a nice looking Northern Water Snake: 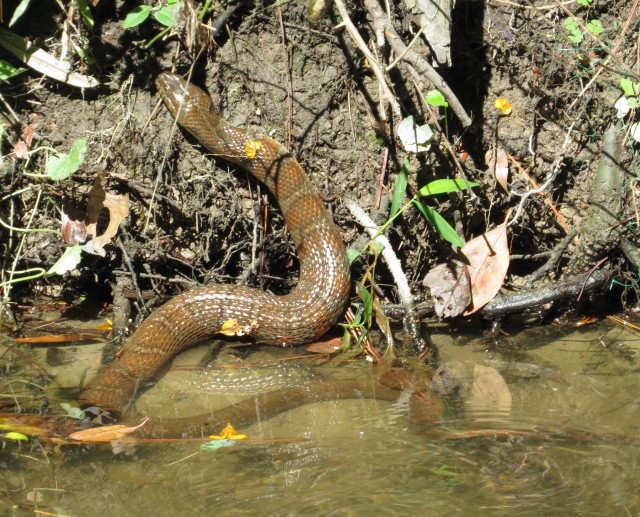 Northern Water Snake, climbing out of the creek

This isn’t my favorite cormorant picture ever (I think I say that about every cormorant picture) but it’s neat to see them perching with their wings spread. This is an extremely common behavior for cormorants; they all do it often. I’ve read that it’s for drying their wings but I’ve also read articles that question that assumption. Sorry its back’s to the camera:

If you’re at all interested in bird behavior, I became aware earlier this week of a very impressive book that I’m around half way through. It’s called What the Robin Knows – How Birds Reveal the Secrets of the Natural World by Jon Young. It’s not just about robins but it is mostly about songbirds (passerines) and I doubt it has anything about cormorants. But it’s a fascinating read.

I hiked a bit longer – probably twenty minutes – downstream with the dogs before I took this one. Looking across the river. Look at this reflection. And have a great week,

Reflect on this for just a moment:

I am a rehabilitation counselor. I have many friends with autism and traumatic brain injuries. They help me learn new things constantly. I hike with dogs at the James River in Richmond - a lot. I've completed an Iron distance triathlon a year for 11 years. My most recent was in Wilmington, NC in November, 2013. I currently compete in mid-distance triathlons. And work and hike and take pictures and write and eat.
View all posts by Jay McLaughlin →
This entry was posted in Birds, Fun, Rivers and tagged Fun, james river, nature, outdoors, Pony Pasture, Rivers. Bookmark the permalink.