I have an upper respiratory thing and went down to the river this afternoon for some healing. I almost called this “Good for what ails ya’” but when I searched the blog I learned I’d used that expression eleven times! Oops! The blog is of course nearly four years old and has over 150 (!) posts on it but still. The river always makes me feel better. Unfortunately I still have whatever this is but it’s going away. And when given the choice of feeling awful at home or feeling awful when hiking with the dogs at the river, I’ll hike any time.

It’s always an encouraging sign when the first thing we see is a bluebird: 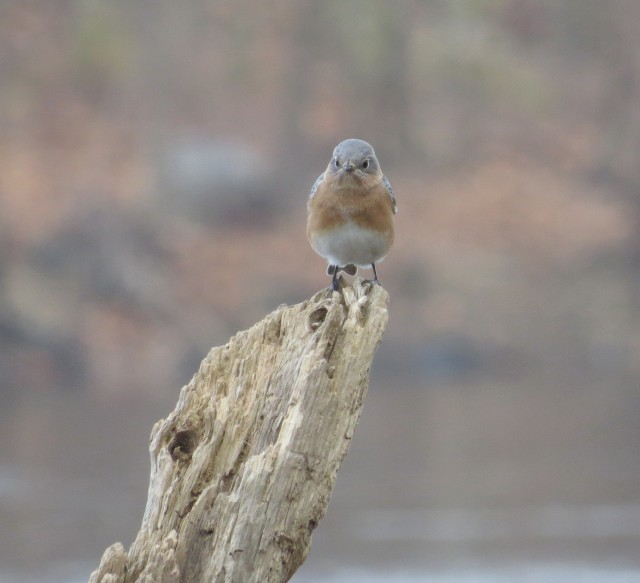 Another bluebird! First thing we saw at Pony Pasture today!

That’s not a spectacular picture but I got a nicer one on Thursday:

That may very well be the same bird. My brother Shane thinks it’s a female and I’m inclined to go along with him. I’ve never seen bluebirds so close to the parking lot before so this is nice. In the picture above, I believe she’s eating a poison ivy berry. I read one web site that seemed reputable and said “The berries are edible, but only if you’re a bird (the downy woodpecker eats the berries and spreads them through its droppings).” Bluebirds too, it appears.

I didn’t even move from that spot this afternoon when I took this picture:

Could this be a female goldfinch in winter attire? It wasn’t a very gold-finchy spot. Nice looking bird though.

This is a bird I am not expert on. It may be a female goldfinch in winter plumage. It was a nice picture though.

On second thought, as I look at it, perhaps it’s a warbler of some sort. I am also inexpert on warblers. But that head seems too round for a goldfinch. I’m not certain.

I’ve already noted (ad nauseam) the arrival of Buffleheads (Bucephala albeola) at Pony Pasture. They are a reliable harbinger of winter. For some reason, Ring-billed gulls (Larus delawarensis) are equally reliable. This little bunch is just the vanguard but soon there will be hundreds and hundreds. I see them a lot downtown too. If you click on that link about Ring-bills, you’ll read this:

“These are the gulls you’re most likely to see far away from coastal areas—in fact, most Ring-billed Gulls nest in the interior of the continent, near freshwater.” Here’s a little cluster of Ring-bills. Notice the one on the left getting a drink:

On the way back today we were on the trail leading up to Charlie’s Bridge. There’s a little old fence there and there were three does on the other side of it. They obviously knew the fence was there and just sauntered away about ten feet then just stood there in the woods. Mackey was going out of his mind:

Mackey tells those deer to KEEP MOVING. They ignored him.

I didn’t get any real fantastic pictures of the deer. But if you look at the picture below, you can see the tail of one deer very clearly. You can also see her eye, she’s looking to the left. Then look just to her right and another deer is standing there, facing away. I’m sure having Mackey barking his fool head off was not making it a relaxing afternoon.

Short post this week – possibly more next week. Meanwhile – have a great Thanksgiving! And a great week! All best,

I am a rehabilitation counselor. I have many friends with autism and traumatic brain injuries. They help me learn new things constantly. I hike with dogs at the James River in Richmond - a lot. I've completed an Iron distance triathlon a year for 11 years. My most recent was in Wilmington, NC in November, 2013. I currently compete in mid-distance triathlons. And work and hike and take pictures and write and eat.
View all posts by Jay McLaughlin →
This entry was posted in Birds, Dogs, Fun, James River, Rivers, Smiles (including "dog smiles"!) and tagged bluebird, buffleheads, Dogs, Fun, Pony Pasture. Bookmark the permalink.