I hope 2014 was a great year and 2015 will be even better. My first day of work for 2015 was Friday, January 2, and as I was pulling into my neighborhood on the way home, this handsome guy swooped across in front of my car:

I was fortunate to begin that day with such a nice reminder of the wildlife all around me. Because later that day – I’m not making this up – I was hiking in western Henrico and we came across this sign:

In my most recent post (What a present!, 28 December, 2014) I posted all pictures of a hike Mackey and Turner and I took on Christmas day. Our family Christmas was at my brother Kevin’s house in Doswell the following day. I got more great presents than anybody really deserves. One was this terrific hat from my sister Sheila. Look closely at the hat – click on it to enlarge it if you can’t read it. Hint: it doesn’t say “life is good.” But it might as well: 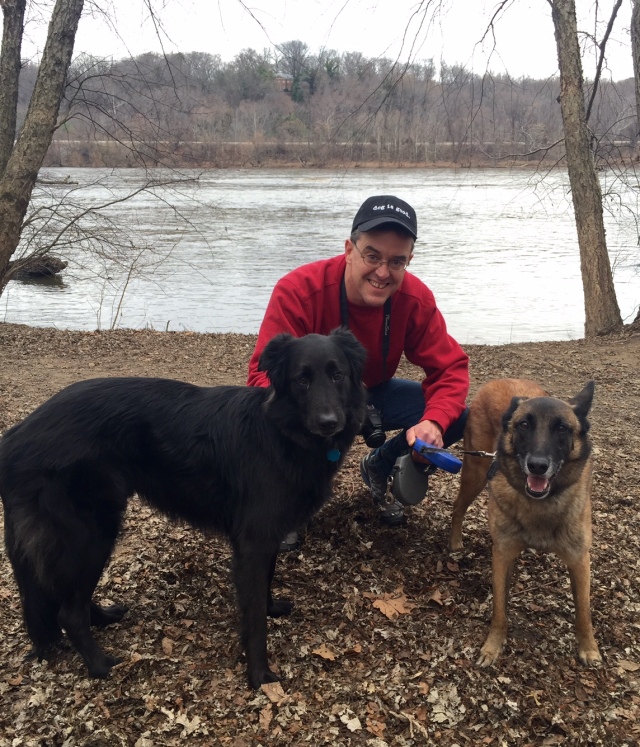 We were hiking at the river a week ago and met a person named Nadia and she graciously and skillfully took that picture.

The same day (Sunday, 28 December, 2014) we were at the easternmost point in our hike (furthest downstream) and were hiking away from the river along the banks of the creek. I’m not even certain what the name of the creek is. Pony Pasture is on one side of it and Willow Oaks Country Club is on the other. I noticed unusual movement in the water and looked down and saw this moth: 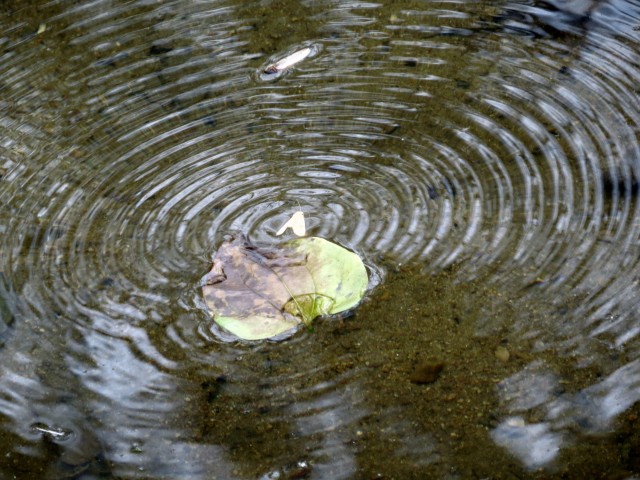 There are few living insects left. Non dormant, that is – there are plenty of living insects in various stages in the park. But they’re not visible now. It went up to nearly 70º today but the predicted high temperature this Thursday (8 January) is just 26º! That will be a great day for hiking if you don’t like bugs. Or mud.

I’m learning about animals in the winter. The Wildlife Center of Virginia has an online book club. I just learned about it this week. Their next “meeting” is on Wednesday, 4 February, 2015 at 7:00 PM. The book they’re reading is Winter World: The Ingenuity of Animal Survival by Bernd Heinrich. I’m reading it now. And watching the animals in Pony Pasture prepare to survive the winter. Dr. Heinrich is an interesting human being. In addition to being an emeritus professor of behavioral ecology at the University of Vermont (great place to study winter survival), he is an elite ultra distance runner. This is a fascinating article: Bernd Heinrich: The Natural.

My research for PPFF is a bit dormant this time of year. Things are slow at the park. But I sent my friend Betsy a few plant pictures from our hike this morning and she enlightened me about them – mostly invasives.

I called this “false honeysuckle” because it looks like honeysuckle but doesn’t smell like honeysuckle. Betsy told me it’s an invasive species called “bush honeysuckle” (Lonicera maakii or Lonicera morrowii). This bush is far down in the park and I believe it’s the biggest one there. But there are plenty around. It’ll be easy to see them when they leaf out and flower in April. They’ll go on my PPFF page soon:

Next is another invasive (of course) that Betsy informs me is Wintercreeper (Euonymus fortunei). It’s all over the park right now (of course):

I photographed another groundcover this morning. Betsy tells me it’s Gill-over-the-ground (Glechoma hederacea), and it’s (can you guess?) not a native and not desirable:

I also got a couple of pictures of English Ivy (Hedera helix). The two plants looked very different but Betsy says that the “leaves can be quite variable.” Also (as you perhaps have already surmised) she tells me that “All should be removed.” 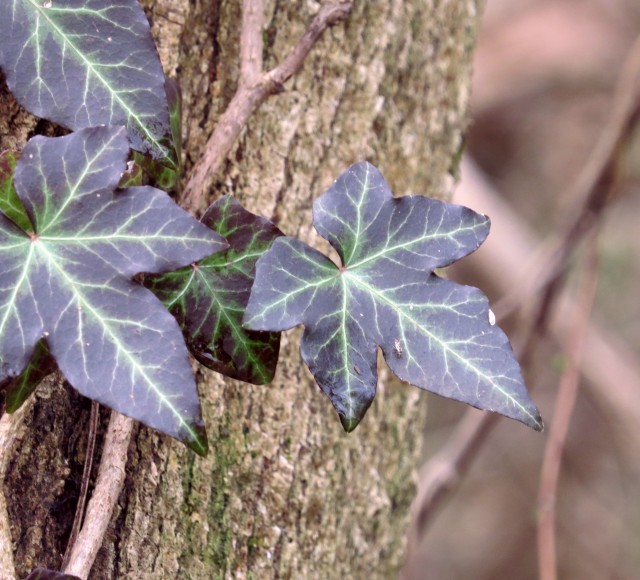 This stuff will all be incorporated into the PPFF section (Every living thing) over the coming weeks.

My problem with “invasive species” is I’m a white male. The destruction wrought by every “invasive species” on this continent fades to insignificance when compared to the destruction wrought by white males. If something natural in North America is ruined or has gone extinct, it’s happened because of white males. DDT didn’t come from nowhere. Passenger pigeons didn’t shoot themselves. All these “invasive species” are here because white males brought them. Now we’re saying they should go away. But we should stay. Maybe we need to put ourselves on reservations or something. But. Here we are. The Invasive Species to end all Invasive Species. We’ll show them a thing or two.

I spoke with a complete stranger about my blog a week or two ago and told him it has:

He laughed and said “ah, the wedge issues.” So enough ranting about invasive species. I think I need to fill my bird feeders. Put down some weed killer. Plant some grass.

I am a rehabilitation counselor. I have many friends with autism and traumatic brain injuries. They help me learn new things constantly. I hike with dogs at the James River in Richmond - a lot. I've completed an Iron distance triathlon a year for 11 years. My most recent was in Wilmington, NC in November, 2013. I currently compete in mid-distance triathlons. And work and hike and take pictures and write and eat.
View all posts by Jay McLaughlin →
This entry was posted in Birds, Endurance, James River, People, Pony Pasture, Rivers, Smiles (including "dog smiles"!) and tagged invasive species. Bookmark the permalink.