“Gradually and then suddenly”

Posted on February 8, 2015 by Jay McLaughlin

I don’t (yet) have any truly spring like pictures. The first of those are generally daffodils, which have not yet come out of the ground anywhere on my normal circuit. They’ll be up soon – maybe even this week – and I’ll get a picture when they do. Birders (I’m learning) talk a lot about the “spring migration.” According to everything I read, it doesn’t start this early in central Virginia (first week in February). But I photographed this handsome Eastern Phoebe (Sayornis phoebe ) at Pony Pasture this week and I suspect he may be on the thin leading edge of the spring migration: 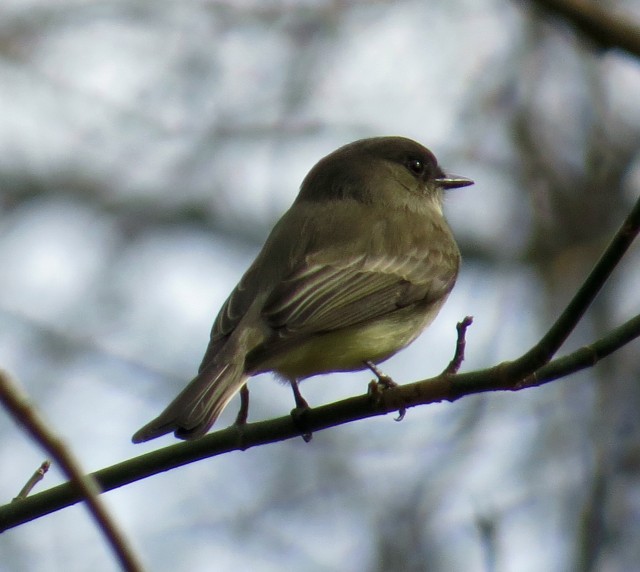 That color is a little bit off due to my messing around with it. I’ll get a better one. I don’t know how I got that faint greenish tinge in there. Sorry.

In the Cornell Lab of Ornithology web site section about phoebes the authors write that “…Eastern Phoebes winter farther north than most other flycatchers and are one of the earliest returning migrants in spring.” So maybe that one stayed here all winter or perhaps it’s an early arrival.

Ethan “got” another great bird photograph earlier this week. When the weather is foul we go to the Y and work out. But this time of year when the weather is cold and fine and bright we enjoy spending time out-of-doors. Some days we go to Bryan Park and some days to Pony Pasture. The birding and hiking and nature watching are enjoyable in both places. Luckily for both of us, Ethan chose Thursday to head over the Huguenot Bridge and see what we could find at Pony Pasture. But we never made it that far! We crossed the bridge and as we were heading down the off ramp to Riverside Drive there was a Red-shouldered Hawk perched in a tree looking directly at us! This was at 3:15 PM and it was facing south, warming up in the afternoon sun. Today (Sunday) is warm and pleasant but Thursday for much of the day it was bitterly cold and the wind was gusting over 35 m.p.h.

I’ll tell you though – and Ethan will tell you too – pictures like that don’t just fall in your lap. Because the bird still had not moved and we crossed the street and climbed over the other guard rail – this time we were quite close. And Ethan said “This is hard!” Because even though you’re “close,” you’re close by the standards of a hawk. This is not a pigeon or some overfed goose in the park. Your camera is zoomed in and your hands are freezing cold and they’re shaking and the lens is shaking and you’re just sure the bird is going to fly away any second and it takes a lot of concentration and self-control. My hat is off to Ethan. We took sixty images to come up with this one. It’s a winner.

Also – even with a great image like that I couldn’t tell if it was a Red-tailed hawk (Buteo jamaicensis) or a Red-shouldered hawk (Buteo lineatus). Fortunately my friend Kim is an expert birder with a particular expertise in raptors. I sent her that picture to help me understand the difference. Here is her response – used without permission! I hope you won’t mind Kim – you should write a field guide! Here is what she taught me:

Adult red shoulder. Patterns and color on chest., redder than red-tail’s to me, and finer. Wings and tail large bands of very dark brown interspersed with finer bands of whitish (on tail) and markings (on wings). This shows really clearly in flight with light coming though, as if the wings and tail were zebra like black and white, but a bit more dark than light. But you can sort of make it out here too. Some of it’s just the overall look, which comes with having seen a whole lot of them! Part of what goes into that is the relative size of beak, and feet especially – much more slender toes and legs – when you can see them. Very nice!!!

I was hiking with the dogs earlier in the week and it was sunny and frigid. I spotted this pair of bluebirds (Sialia sialis) high in a sycamore on the river’s edge, investigating a cranny:

Pair of bluebirds investigating a cranny

I supposed it might be a nesting site – maybe it is – but three seconds later – according to the time stamp on my camera – this handsome male Red-bellied woodpecker (Melanerpes carolinus) was sticking his nose in the same spot. Possibly the sun was warming it up and bugs were moving around:

True story though – after my last picture of the Red-bellied woodpecker, it was thirty-three seconds before one of the bluebirds was back in. It must have been a great spot. It was quite high up and I’m sure warm on the frigid morning.

Speaking of frigid. The 2015 Yukon Quest began at 2:00 PM EST yesterday in Whitehorse, Yukon Territory. The twenty-six sled dog teams are just over one full day into a 1,000 mile journey to Fairbanks, AK. In odd-numbered years it goes from the Yukon to Alaska. In even-numbered years it goes the opposite direction. It began in 1984 and has been run every year since. The slowest finish ever was in 1986 at over fourteen days. Last year was the fastest ever at eight and a half days. So possibly the winning team will arrive in Fairbanks in the early morning hours Eastern time a week from Monday.

If you look through the current standings you’ll see a musher named Lance Mackey – that’s who my dog Mackey is named after!

There’s a wonderful poem written by Robert W. Service in 1907 called The Cremation of Sam McGee. I suggest you read it; it’s a treasure. Part of the first stanza says:

But the queerest they ever did see

Was that night on the marge of Lake Lebarge

I included that reference because all of the teams in the YQ passed “the marge of Lake Lebarge” in the night last night. It’s a lake but it’s really a wide spot in the Yukon River. Reading the poem is great but if you want a real treat, listen to Johnny Cash read it. It’s five minutes and thirty-four seconds of your life you’ll never get back but I assure you it’s time you’ll treasure. Listen to it here: Sam McGee, as read by Johnny Cash. Cris L., I believe you’ll especially appreciate this. His voice reminds me of you!

I was looking for something else and realized I had an old, low quality video I took ten years ago of a beaver swimming in a canal at Pony Pasture. It’s very low quality but there’s no mistaking it’s a beaver – more precisely a North American Beaver (Castor canadensis). The video’s only eighteen seconds long and in the last eight-or-so seconds you can see my old dog Ivory run up to edge of the creek:

I had the great good fortune of dog-sitting for our old pals Lola and Luna this morning and a friend was kind enough to take our picture: 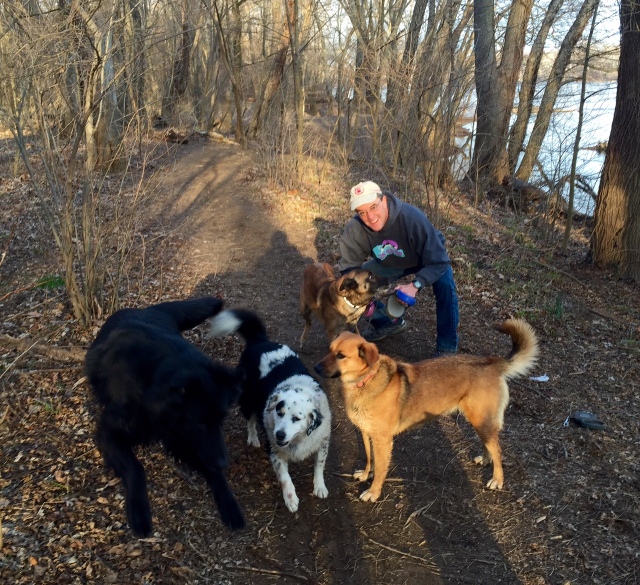 Mackey (wild black blur on left), Luna, Lola, Turner in back, and yours truly

I may have mentioned before that Mackey and Turner howl – loudly and in unison – when certain emergency vehicles pass with lights and sirens. They howl along with the sirens. I think it’s ambulances they prefer to accompany. It’s definitely not police cars and I am relatively certain it’s not firetrucks. Turner sits on his rear end and points his nose at the ceiling and sings. Evelyn took a picture some time ago and posted it on Facebook. It was on my birthday and Turner was wearing a birthday hat! My niece Aileen used the picture and made a great thank you card! Enjoy: 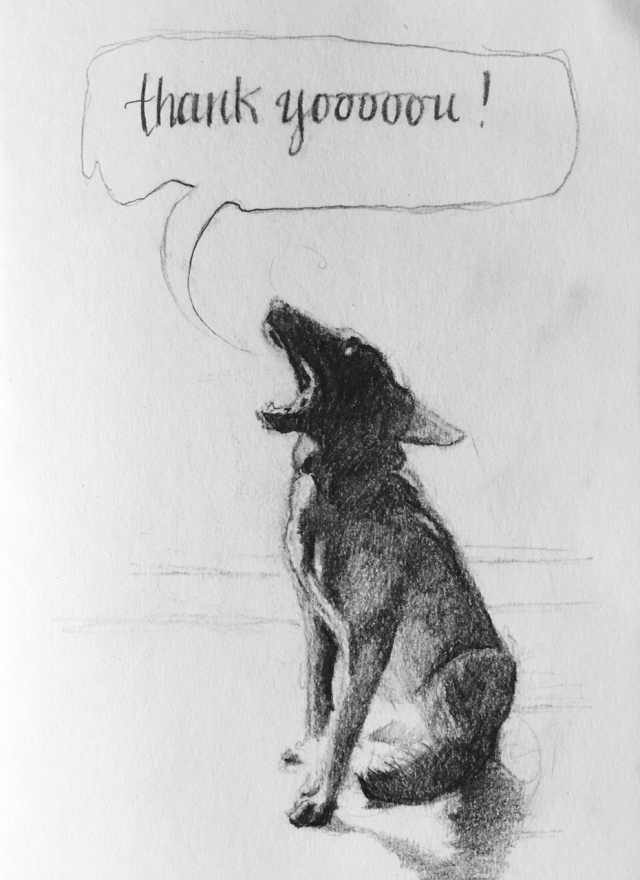 I am a rehabilitation counselor. I have many friends with autism and traumatic brain injuries. They help me learn new things constantly. I hike with dogs at the James River in Richmond - a lot. I've completed an Iron distance triathlon a year for 11 years. My most recent was in Wilmington, NC in November, 2013. I currently compete in mid-distance triathlons. And work and hike and take pictures and write and eat.
View all posts by Jay McLaughlin →
This entry was posted in Birds, Dogs, Fun, James River and tagged bluebird, Dogs, Fun, james river, nature, outdoors, Pony Pasture, Rivers, smile, Smiles - human AND dog smiles!. Bookmark the permalink.

2 Responses to “Gradually and then suddenly”