In the first few months of my Every living thing/Pony Pasture Flora and Fauna project I identified and photographed many plants and animals quickly. Canada Geese, Mallards, Robins, they’re in the park every day. Sycamores, Pawpaws, Black Walnuts, they’re the signature plants of Pony Pasture. In my Every Living Thing page I have to date identified (and photographed) forty-five different plants and forty-seven different “animals” (including insects, reptiles, mammals, everything else). That was the “low hanging fruit” of this project – I’ve gotten all the easy stuff. I’ve even gotten some not-so-easy stuff, e.g. Northern river otters. I thought a few more items would trickle in over the course of the year, beginning in April or May when the weather warms up. Imagine my surprise when I photographed three new birds this week! Fortunately my friend Betsy from the Friends of the James River Park identified two for me. But the third is still unidentified – put a note in the comments section if you can enlighten me!

This is the first unidentified bird – I took this picture Thursday (2/26) afternoon at Pony Pasture:

I described it to Betsy thus “Just a few yards down from Half Moon Beach, this is a dedicated diver – I had to stand there with my hands freezing and my lens pointed while I hoped for it to come up. Then click in about the three seconds before it disappeared again. Any guesses? Very small, maybe not even as big as a Bufflehead:”

On the same trip I photographed this little gem:

There’s a lot of spots on the river that have those unappetizing-appearing clumps frozen into them. They look a lot like suet, although I wince when I imagine what the coagulated matter might be. Floating in the lovely river. And I guess it has seeds and bugs and stuff in it because I have dozens of pictures of birds enthusiastically munching away. In several different spots. They’re getting their calories where they can. It is cold down there!

When I started this project (Every living thing) in early December of 2014 Betsy sent me a note that said “Let me know if I can help with ID of the flora.” She helped with most of the identification on the Pony Pasture Flora page. Now she’s helping with the ID on the Pony Pasture Fauna page! Thank you Betsy!

While I’m thanking her, please also look at the duck I misidentified in last week’s post, My favorite place. When I first saw this duck I said it was a Redhead (Aythya americana). Betsy sent me a note that said in fact it was a Canvasback (Aythya valisineria). The difference (she pointed out) is in the beak.

Here are the “image” pages from google when you search first Redhead then Canvasback:

Redheads – by Google – look closely at the beaks.

Canvasbacks – again by Google – again look closely at the beaks.

An honest mistake! Thanks for the correction Betsy!

And now for something unmistakable – the first daffodil (for me) of 2015. I took this in Pony Pasture near the main parking lot Monday (2/23/2015) afternoon. It’s just about to open up: 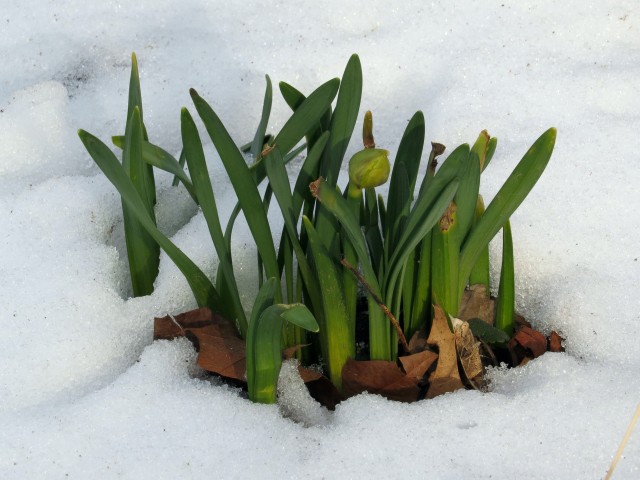 I also got a lucky picture of a bluebird on Thursday. It’s not technically proficient but I don’t get flying pictures often:

An image I’ll never tire of:

It’s possible I’ve said this in previous posts. But I’ll say it again – if you don’t like pictures of bluebirds, this is not the blog for you. If I get a decent bluebird picture, it’s going in here – if I live to be a hundred. I won’t post junk shots (and I take about fifty for every decent shot I get) but if I get a bluebird picture I like, I’m posting it. It’s impossible for me to look at a bluebird and not smile.

Anyway, back to the reason I named this post “Low hanging fruit.” It’s all gone – the easy stuff’s identified. Here is this week’s mystery bird – does anyone have any idea? I took this picture at Pony Pasture Saturday (yesterday) at around 11:15. Please help me identify this “mystery bird.” It was swimming alone and never dove or flew while I was looking at it:

I have no idea! If you do, please enlighten us all!

Also if you looked at last week’s blog post (My favorite place) you saw a lovely photograph I took of a deer near Charlie’s Bridge. This afternoon there were three again in the same place – possibly even four. And they stood and sat and lay around while I took pictures again. Although I didn’t linger as long today because it was raining and my camera was getting wet so I didn’t get any perfect pictures. But I got two reasonable ones. This one is similar to last week’s:

Isn’t that a nice look? Whitetail deer are “ruminants” and this in my anthropomorphic opinion is a ruminative expression. 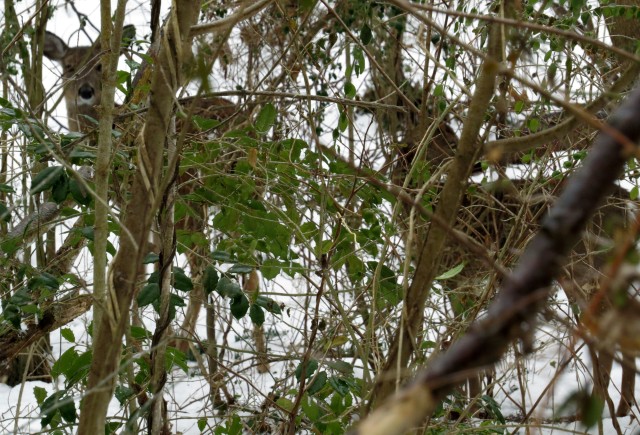 Much less obvious when you back away a bit!

All for now! Until next week,

I am a rehabilitation counselor. I have many friends with autism and traumatic brain injuries. They help me learn new things constantly. I hike with dogs at the James River in Richmond - a lot. I've completed an Iron distance triathlon a year for 11 years. My most recent was in Wilmington, NC in November, 2013. I currently compete in mid-distance triathlons. And work and hike and take pictures and write and eat.
View all posts by Jay McLaughlin →
This entry was posted in Birds, Fun, James River, People, Pony Pasture, Rivers and tagged bluebird, Flowers, james river, nature, outdoors, Pony Pasture, Rivers, Smiles - human AND dog smiles!, whitetail deer. Bookmark the permalink.

2 Responses to The low hanging fruit