A week ago at 5:00 PM I published a blog post called “We can discover the wonders of nature…”. Six miles away and 24 hours later I clicked the shutter on this picture:

Isn’t that just remarkable? That you can muse about discovering the wonders of nature and before the end of the next day take a photograph of a Bald Eagle? Inside the city of Richmond? That is a wonder of nature. I was very enthusiastic about that eagle picture and sent it around to a few friends. The response is remarkable:

One wrote: “All of nature is waking up and showing its great optimism for the future.”

I sent it to another friend (a talented photographer) and wrote that this was “not an elite quality photograph”. My friend responded that “elitism is overrated. Seeing a bald eagle is not.”

Still another wrote “”What a wonderful spring treat!!!  Seeing an eagle always gives me chill bumps.”

A fourth person wrote that it’s “Really neat to see that Eagle, which seems it should be capitalized no matter what.”

Often when I read the news I have the sense that people are jaded about this or discouraged about that. But the reality I’m experiencing does not reflect that sense. So maybe my sense is wrong! Hmm…

I take the majority of my pictures at Pony Pasture. But I don’t care where you are if you have a camera – if you watch a big bird come winging in and get bigger and bigger and land in a tree and it’s a Bald Eagle – you’re going to take pictures like crazy. It was a 100% surprise.

Also this week at Bryan Park I took a picture of a bird I’ve never seen before! I continue to be amazed. More wonders of nature. The bird is tiny – around four inches long, and it weighs as much as a penny and a nickel together. It’s called a Brown Creeper (Certhia americana). Here’s a blurb about it from Birds of North America: “The brown creeper, as he hitches along the bole of a tree, looks like a fragment of detached bark that is defying the law of gravitation by moving upward over the trunk, and as he flies off to another tree he resembles a little dry leaf blown about by the wind.” They go on to refer to it as “One of the continent’s most inconspicuous songbirds” although it’s widespread. Another site says it flies to the bottom of a tree and works its way up, “sometimes passing downward-facing nuthatches along the way.” Isn’t that fun? Here is the picture I was fortunate to take; you’ll see why it’s so inconspicuous. In this picture it’s about in the center, just above that small branch:

Brown Creeper – in the center, facing up. Can you believe how small and invisible that is?

It is highly likely I would have lived my whole life and never known that bird existed. That is a wonder of nature. I watch birds! And I never even knew. What a treat.

I will insert a caveat here – with both the Eagle and the Brown Creeper, I was hiking with my friend Ethan who is still in high school and has much better vision than me. Even with the eagle, I’d look down at my camera or something and look back and be unable to find it. And I’d say to Ethan “where is it again?” and he’d show me. It’s great to go birdwatching with a person who has great vision. Plus I really should finally get bifocals…

I did get one other “first” bird this week, although it wasn’t the first one I’d ever seen. On the same day we “got” the Eagle at Bryan Park I “got” my first Northern Flicker (Colaptes auratus). I knew there were Flickers around and I’d seen them but this was the first time I’ve ever caught one with my camera. This isn’t a terrific picture but I’ll get better now that I know how to get pictures of them. I’m finding that’s the way it works with outdoor photography. This is vague, but I don’t know how to “see” something until I finally actually see it in real life. You can look at all the books and magazines and field guides you want, but you don’t really learn to see a wild animal until you actually begin to see it in the wild. Then, suddenly, you begin to see it a lot. Here is my first poor quality image of a Northern Flicker. Watch this space for improvements: 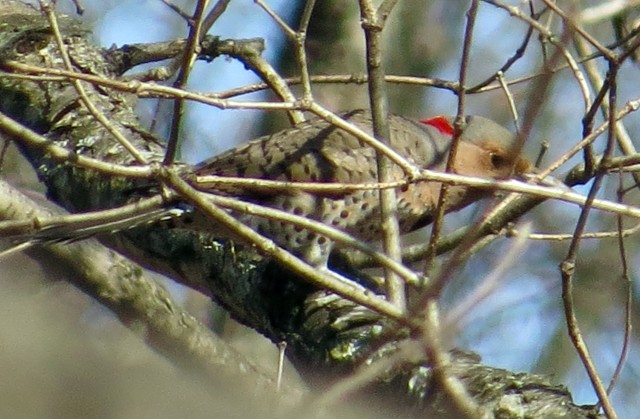 Flicker in a tangle

In Richmond now there are daffodils everywhere you turn – it’s a joy. And I have taken a million pictures. I used to think there was a “perfect” picture to be had. After I became a moderately competent photographer I began to seek it. Should you ever be so foolish to seek perfection in any pursuit, please take my advice and forget it. I finally did and it’s been a big relief and my pictures have improved a great deal. Here’s a daffodil I got this week:

I could do an all-daffodil blog post, and all the pictures would be perfect. Or not. It’s in the eye of the beholder.

I won’t waste our time with more examples of “perfect” daffodil pictures – there is an infinite number. I’ve gotten a “perfect” frog and a “perfect” bumblebee but in nature photography you can shoot any subject a million ways and have a million perfect pictures.

I have a lot to say about this – I think about it incessantly – but I know it can get boring (possibly it already has!). Many of you know that among my favorite writers is the late David Foster Wallace. The quality of my photography will never equal the quality of his prose. But in the book Quack This Way he had this to say about perfection in writing. You could substitute “photography” for “writing” in these quotes and understand more clearly what I’m saying:

“…the fact of the matter is that good writing [or photography] isn’t a science. It’s an art, and the horizon is infinite. You can always get better.” […]

“Like any art, probably, the more experience you have with it, the more the horizon of what being really good is . . . the more it recedes . So a great deal of now being in my 40s and having done this pretty seriously for 20 years is I now have a much better idea of the ways in which I’m not really very good . Which you could say is an important part of my education as a writer [or of mine as a photographer]. If I’m not aware of some deficits, I’m not going to be working hard to try to overcome them.”

So anyway, watch this space – lots of imperfect pictures to come.

I got a neat picture of a gumball this week:

Perfect? Could be. But you may prefer it in green. Or lying on the snow. Or against a blue sky. Better focused. In a trashcan. The choices are infinite.

I also got a neat picture of train tracks! Really unnatural! But a graceful curve:

Took a picture of a male mallard today too. If you’ve seen one male mallard  you’ve definitely seen them all but I never tire of this shade of green. If I saw this color anywhere other than on the head of a bird I would swear it was artificial:

How did evolution select for this color?

Casual blog followers, I apologize but I have not ID’d this bird. And it’s gotten too late to send it around to my bird ID people (all readers for this blog) for ID. Because I don’t know what it is, and this image quality is poor. I think it’s a Ruby-crowned Kinglet (Regulus calendula) but since I was not in a position to see its crown, I am unable to determine if its ruby colored or not. And I am not familiar enough with them for a positive ID. It is a remarkably tiny bird and I saw it at Pony Pasture this morning: 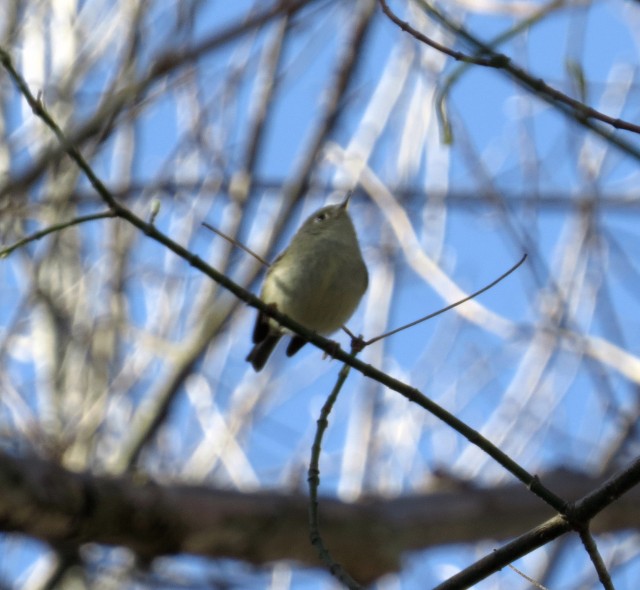 I think this is a Ruby-crowned Kinglet. Confirmation or correct identification will be credited in this space w/in 60 minutes of my reading or hearing it. [THANK YOU KIM AND BETSY! THEY BOTH TELL ME THIS IS A RUBY-CROWNED KINGLET. AND THEY BOTH KNOW FROM SONGBIRDS AND ALL PLANTS AND LOTS OF OTHER WILDLIFE.]

My favorite editor (and bird identification expert) is out of town for the weekend so errors of every variety are my exclusive property. But please point them out! Meanwhile, please visit again next week! And forward this to your friends if you like it!

I am a rehabilitation counselor. I have many friends with autism and traumatic brain injuries. They help me learn new things constantly. I hike with dogs at the James River in Richmond - a lot. I've completed an Iron distance triathlon a year for 11 years. My most recent was in Wilmington, NC in November, 2013. I currently compete in mid-distance triathlons. And work and hike and take pictures and write and eat.
View all posts by Jay McLaughlin →
This entry was posted in Birds, moon, Rivers, Smiles (including "dog smiles"!), Trains and tagged Bald eagle, james river, nature, outdoors, Pony Pasture, smile, Smiles - human AND dog smiles!. Bookmark the permalink.