That’s a corny title for a blog post, but no one has ever accused me of not being corny. Here’s the inspiration for the title (and irrefutable evidence of corniness): 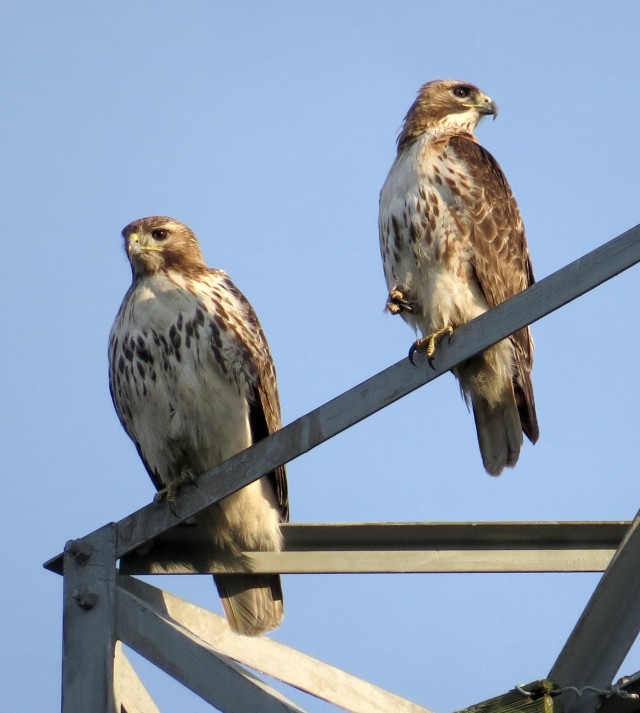 Pair of Red-tailed hawks – female is on the left

Friday, May 1 was the first day in 2015 I photographed a Red-tailed hawk (Buteo jamaicensis) in the parking lot at Freeman High School. You can see that picture in this post from Sunday, May 3: You’re only as good as your last gig. Between May 1 and May 19, I took a lot of pictures, including several more of that hawk across the street from my house (at Freeman). Every time I’d go out I’d look across to see if it was there. Wednesday evening (May 20) I looked up and saw the picture that inspired this post.

Now the pair are together regularly. It’s much more common to see the pair together than it is to see one alone. In the picture at the top of this post, the pair is sitting on top of a tower from the power line that crosses Three Chopt Road immediately east of Freeman. When Mackey and Turner and I pulled up to the light at Westbury and Three Chopt this morning, I looked at the lights above right field on the Freeman baseball diamond and saw this: 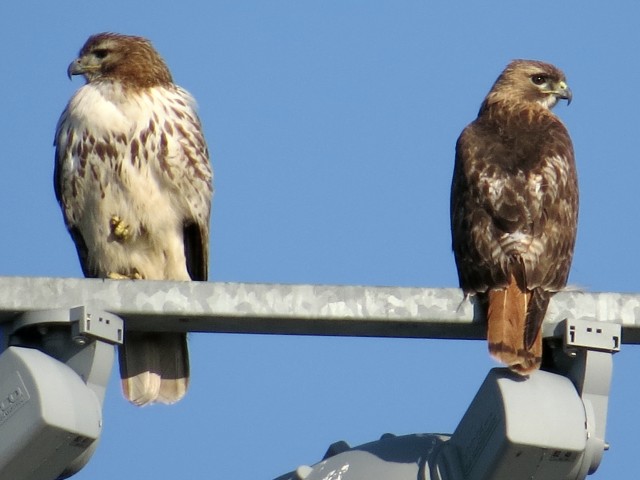 Look both ways before you catch your breakfast

I’ve been reading about nothing but Red-tailed hawks since I first saw the pair together on Wednesday. I read a book called Wild Bird Guides: Red-tailed Hawk, by Charles R. Preston (2000). It is succinct and well illustrated and I know a lot more about Red-tails than I used to. I thought they ate a lot of birds but small mammals are their favorite – squirrels, chipmunks, voles, mice, rabbits, any small furry animal.

The favorite hunting tactic of Red-tails is to find a high perch in an open spot and sit for a very long time, watching for an unsuspecting meal to pass by. That makes great photography subjects – especially when they’re within a five minute walk of your house.

I’m going to put in a couple more pictures and get back to the Red-tails.

Part of the pleasure of bird-watching in central Virginia in May is spending extra time outdoors. And Pony Pasture and the parking lot where I take hawk pictures are filled with my favorite flower, honeysuckle. So not only do you get to spend time with these magnificent birds, you get to do it while the only thing you smell is honeysuckle: 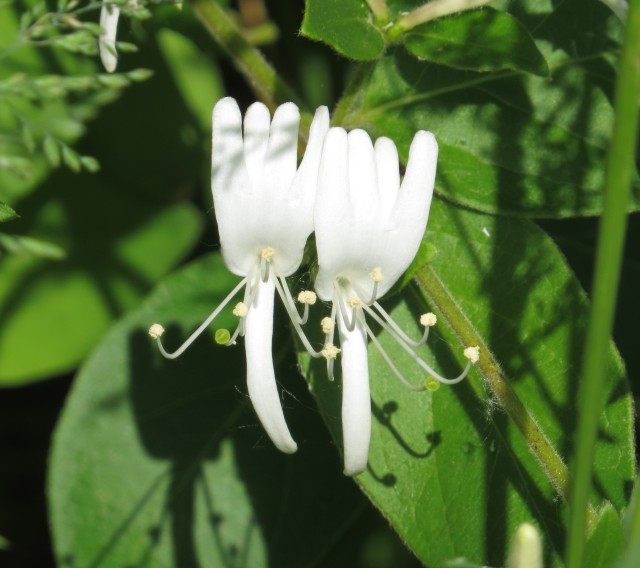 Speaking of amazing smelling plants. If I can choose to be indoors or outdoors, I choose outdoors 100% of the time, no matter the weather, no matter the hour of the day. Which is part of my lifelong attraction to honeysuckle. But with domestic plants, when it comes to smelling wonderful, there are gardenias and there’s everything else. The second-best smelling domestic plant (peonies, no doubt) is fantastic. But nothing comes close to gardenias. Evelyn’s got a beauty growing in our formerly semi-barren backyard. She nursed some of our old roses back to health as well. She cut this pink one and some gardenias and put them on the dining room table: 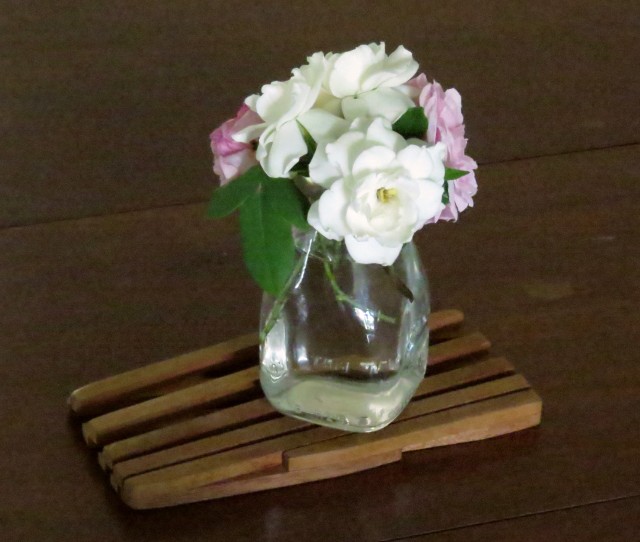 Repeat caption from preceding picture. This, by the way, is a white gardenia and a pink rose. And they both smell captivating. 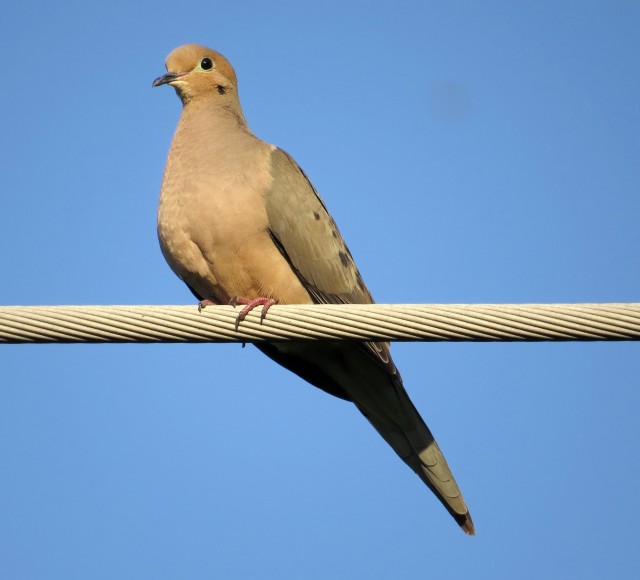 I’ve recently – this week – begun seeing doves do something I’ve never seen them do. In my life. Or at least not been aware of. They puff out their chests. Or their crops, maybe – at this point I am uneducated. I’ll learn soon. I don’t know if this is a male or female, and there was no sound associated with it, and I couldn’t see any other birds around, or a nest: 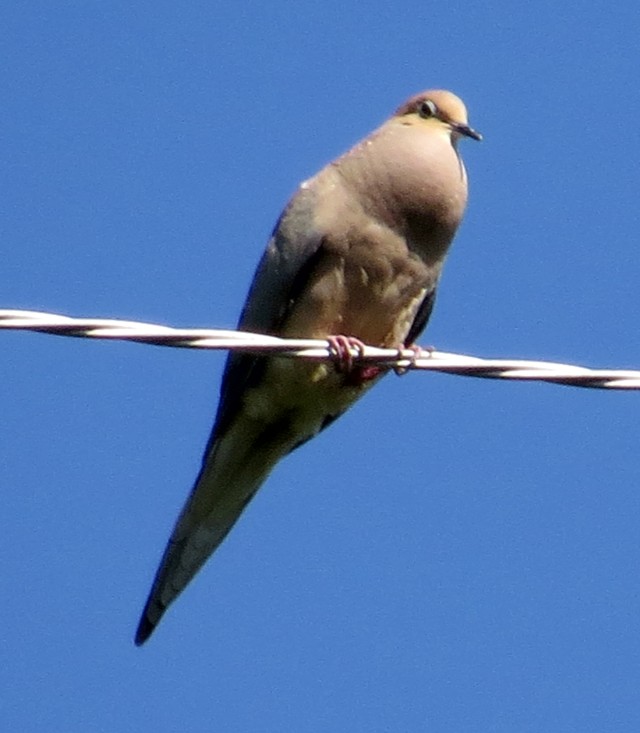 Isn’t that wild looking? Wonders never cease, or at least not so far.

I’ve been watching plants as Spring unfolds and not seen any sassafras, a childhood favorite. I finally saw some at Bryan Park earlier this week. You’ll never mistake sassafras for anything else: 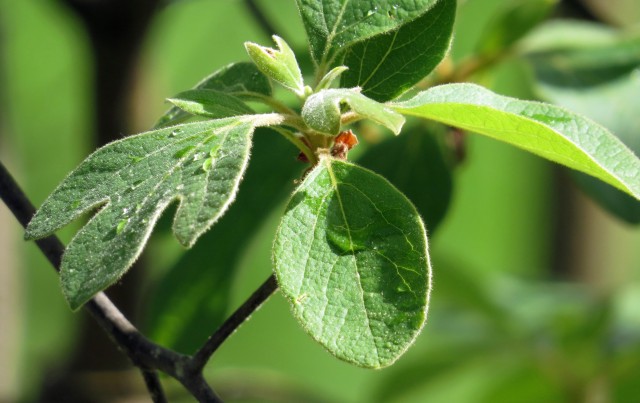 Also at Bryan Park this week I saw what I think was a juvenile Osprey. It was definitely an Osprey; it just looks juvenile and it’s the right time of year: 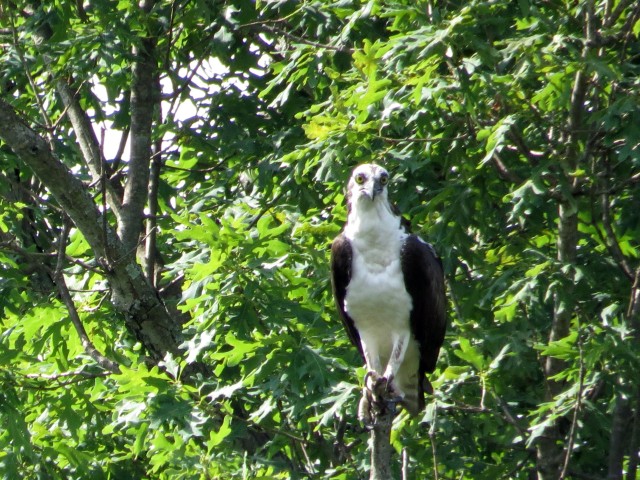 Is it my imagination? Or do you think that Osprey looks immature?

When watching the hawks this week, I wondered a lot of things, and some I still don’t know. But in many pictures, one or both hawks is standing on only one leg. I finally found the answer in a Q & A about Red-tails from Cornell. Here is the Q, followed by the A:

It is perfectly normal for a hawk to stand on one leg while resting or roosting. They will sometimes alternate standing legs. They may do this as a heat-saving measure, keeping the raised leg warm against their stomachs, or as a way to reduce fatigue in the raised leg. Birds may also shift legs just to be more comfortable; in the same way a human will re-adjust their position!

If you’re interested in learning more (it’s fascinating) there are a total of sixty-seven questions and answers just about Red-tails on that Cornell site. I suggest you give it a look if  you have a few minutes: Cornell Red-tail Q & A

I have a question that wasn’t answered there. The answer probably has to do with location or visibility terrain or something. But sometimes they sit like this (both facing the same direction): 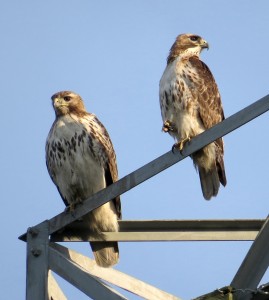 Pair of Red-tailed hawks – female is on the left

And sometimes they sit like this (facing opposite directions): 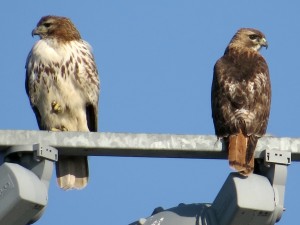 Look both ways before you catch your breakfast

Both facing the same direction or facing opposite directions. Hmm. I’m sure that’s not random.

It’s beautiful and cool and fragrant and pleasant outdoors – the smells won’t come through your computer screen! Neither will the breeze! Get out and see and smell and feel for yourself! And listen – there are few sounds more soothing than a Mourning dove’s call. Soon it’ll be hot. This weather is without compare. Take advantage! And come back next week! And forward this blog post to a friend! Or to an enemy if you don’t like it!

PS I regret that I got behind a bit on this post and left out some great events from this week. I did the Autism 5k at Innsbrook yesterday with friends – always fun. And I’ve been dog-sitting this week for other friends – Lola and Luna joined Mackey and Turner and me at the river this morning. Maybe I’ll put those pictures on next week.

Also, I’ve been obsessed (that’s just how I roll, sometimes) with the pair of hawks this week. I’ve been making my Pony Pasture rounds but my focus has been on those two beautiful raptors. I’ll be back to my Every Living Things project as Spring and Summer progress. Speaking of that, let me add an afterthought picture. I had four dogs with me at Pony Pasture this morning. Try walking four dogs and taking a photograph at the same time. Looking back, I don’t even remember how it happened. But we were on a high bank and I looked down in the water and saw this big (~12″ or 14″) bass eyeing this school of minnows. At breakfast time. In May, everything is eating and being eaten: 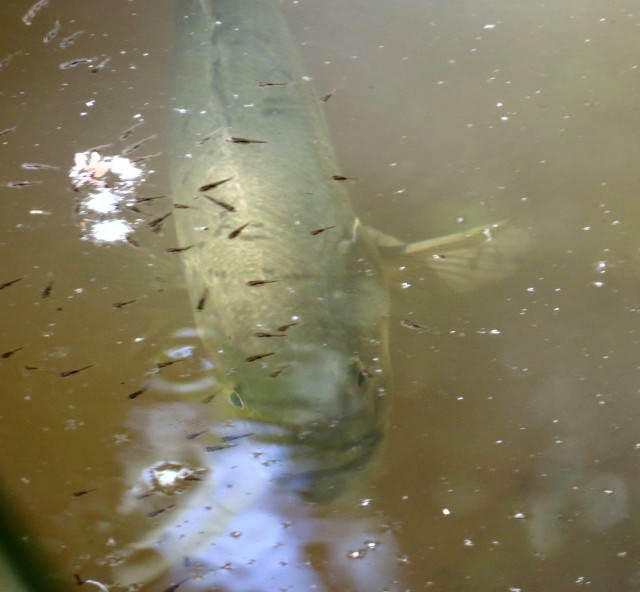 I am a rehabilitation counselor. I have many friends with autism and traumatic brain injuries. They help me learn new things constantly. I hike with dogs at the James River in Richmond - a lot. I've completed an Iron distance triathlon a year for 11 years. My most recent was in Wilmington, NC in November, 2013. I currently compete in mid-distance triathlons. And work and hike and take pictures and write and eat.
View all posts by Jay McLaughlin →
This entry was posted in Birds, Flowers, Rivers, Smiles (including "dog smiles"!) and tagged Autism, bass, bryan park, Dogs, Flowers, Fun, Gardenias, Honeysuckle, james river, mourning doves, nature, Ospreys, outdoors, People, Pony Pasture, Red-tailed hawks, Rivers, Roses, sassafras, smile. Bookmark the permalink.

4 Responses to Double the fun!!