The more I learn, the less I knew!

If you’d asked me a year ago how much I knew about Red-tailed hawks and ospreys, I would have been confident I knew a lot. But as the months wear on and I spend more time observing them and photographing them and reading about them and thinking about them, I realize I hardly even know the basics!

I have learned a bit about where to find them though. My first Red-tailed hawk photo was on May 1 of this year, but I have Barred owls and ospreys and turkey vultures from April. So I’ve been photographing them steadily for five months. June 28 of this year I put up a post called “Warning: graphic images – hawk catches a rabbit.” The pictures from that post were so remarkable and it’s so close to my house that I look up at that stump every time I drive by. I was rewarded again yesterday afternoon when I swung past it on my way home. Same stump, different bird, different “quarry”: 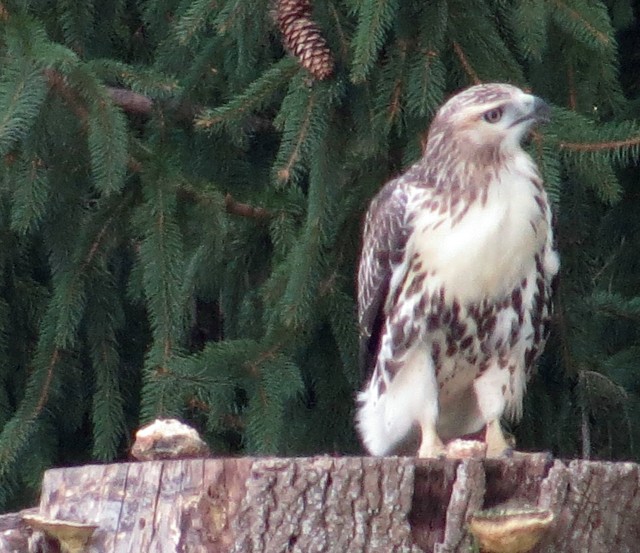 Unidentified “quarry” on the left. I think it’s just a piece of fungus.

Young Red-tails are known for finding prey-like objects and practicing for when they deal with the real thing.

Here he is “playing” with it:

Showing it (whatever it is) who’s boss.

Then he got driven off by a mockingbird – it never ends – and hopped up onto a nearby power line. The mockingbird’s coming after him again: 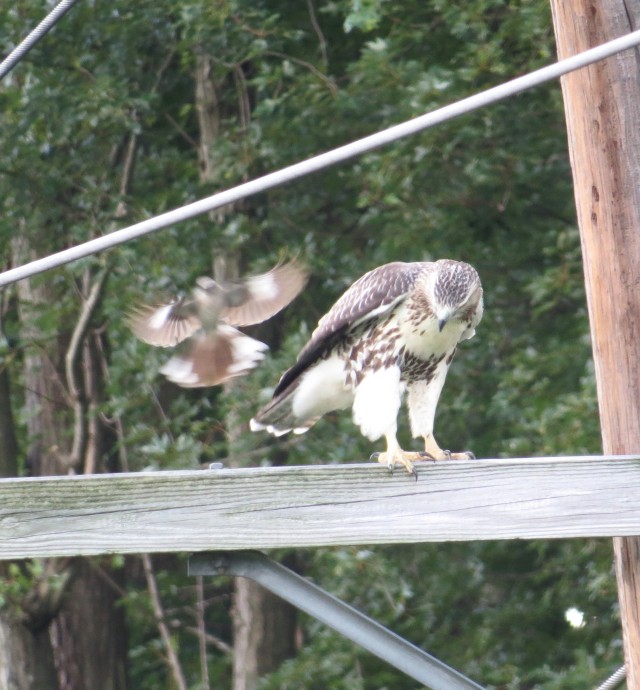 Mockingbird coming in for another pass. It is constant.

That hawk stayed in that area for an eternity. From the time I took my first picture until the time I took my last was over twenty minutes, and I’m sure he was there when I arrived. I did get a decent video, one of the better that I’ve taken. It only lasts eleven seconds. Just as it begins, the hawk is standing on his stump and the mockingbird is coming from behind him and flies off to the right and disappears. You can see the hawk watching it (it’s out of sight) and it comes back in, flying from right to left:

Just FYI, that’s a young hawk. My friend Kim knows more than average (a lot more than average) about Red-tails. When I put this on fb she wrote “Handsome young bird! See the light colored eyes and banded tail?” I noted that he acted immature, which is just a sense I’ve gotten from watching the hawks for several months. The main way he acts immature is he just doesn’t have any confidence. When you watch for confidence in people and in dogs it’s easy to see, and equally easy to see when it’s missing. It’s missing in this youngster.

I went out this evening to see if I could photograph the ospreys. I haven’t been over all week. There was no visible activity on the nest, although a crow was sitting up on the tower. Across the street there was  a Red-tail on another tower. But no ospreys in sight. Or in sound; they’re noisy. I’ll go back this week and see if I can get one. 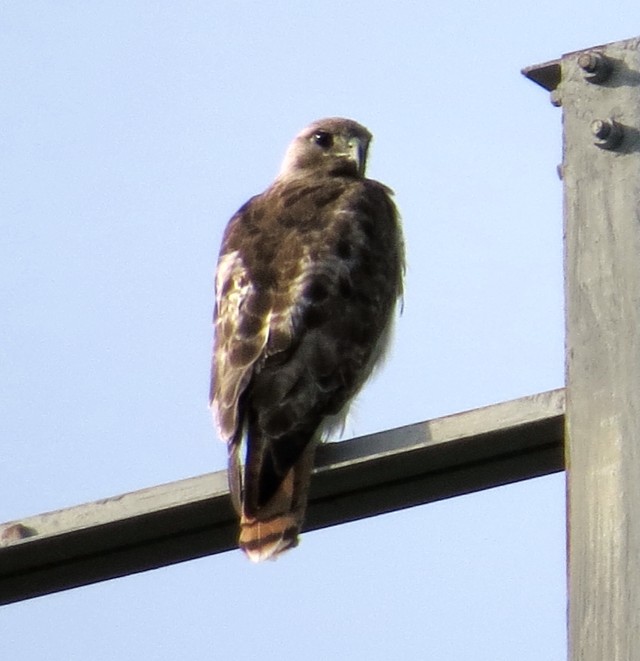 I went to “osprey country” – and got a hawk instead! Overlapping territories.

I’ve been spending a reasonable amount of time at Pony Pasture but I’ve been lax about adding to my Every living thing project. I have a few additions to make but they’re not organized yet. Soon.

Meanwhile, I’m training for a few more short triathlons coming up over the next month or so. This is a slow time of year and my blogging is slow! I apologize! Here are a few bright flowers from Pony Pasture this week, including one with a graceful moth sauntering in for a visit: 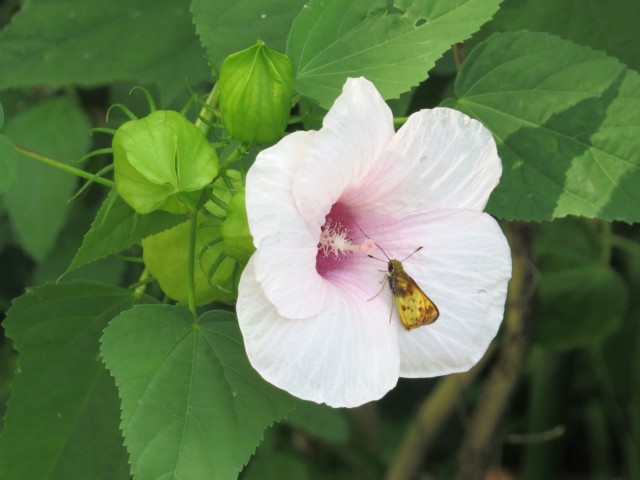 Moth visiting a flower at Pony Pasture this morning 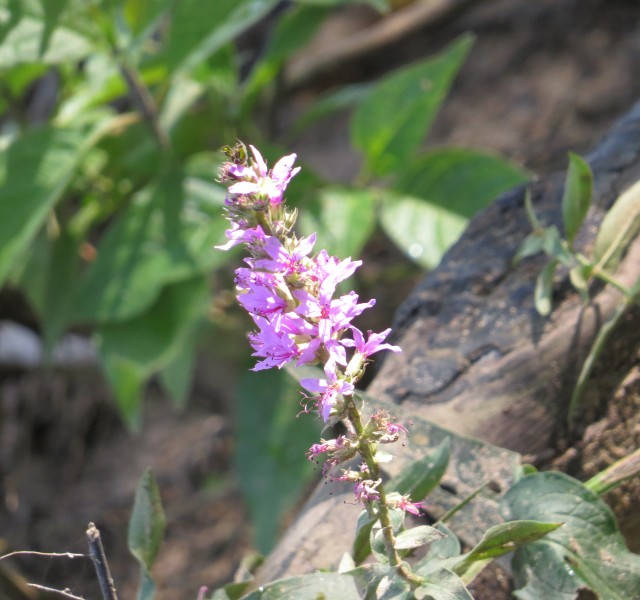 Still some bright colors as the days get short

More next week! I hope yours is great! All best,

I am a rehabilitation counselor. I have many friends with autism and traumatic brain injuries. They help me learn new things constantly. I hike with dogs at the James River in Richmond - a lot. I've completed an Iron distance triathlon a year for 11 years. My most recent was in Wilmington, NC in November, 2013. I currently compete in mid-distance triathlons. And work and hike and take pictures and write and eat.
View all posts by Jay McLaughlin →
This entry was posted in Birds, Flowers, Fun, Insects, James River, People, Pony Pasture, raptors, Red-tailed hawks, Rivers and tagged Flowers, Fun, james river, nature, outdoors, Pony Pasture, Red-tailed hawks, Rivers, smile. Bookmark the permalink.

1 Response to The more I learn, the less I knew!