Posted on September 6, 2015 by Jay McLaughlin

What a word. According to my American Heritage Dictionary: zugunruhe or Zugunruhe n. The migratory drive in animals, especially birds.

Tucked in there between Zugspitze (the highest peak in Germany) and zugzwang (A situation in a chess game in which a player is forced to make an undesirable or disadvantageous move.)

There are a lot of migrating birds in central Virginia now. Vultures are common in our area – you can see one circling overhead almost 365 days a year if you look up. But almost 100% of those are Turkey vultures (Cathartes aura). Friday when I was driving home I saw flocks of Black vultures (Coragyps atratus) in two separate places within a half hour. I saw more black vultures in that half hour than I normally see in a year. They’re similar to Turkey vultures except Turkey vultures have pink heads and Black vultures have black heads and you can tell them apart in a second. I didn’t get great pictures, but I have a couple. First allow me an observation about our regular day-in-day-out Turkey vultures. They always look like they mean business. I’m quite certain no one has ever looked at an adult Turkey vulture and said “silly.” But these Black vultures were acting like they were in a cartoon or something. Here’s one of the less silly pictures I took:

But look at this next picture. It’s zoomed back, but there are two vultures in this picture:

Two vultures on this cell tower.

Now, zoomed in more. The first bird is a little odd, but not extremely: 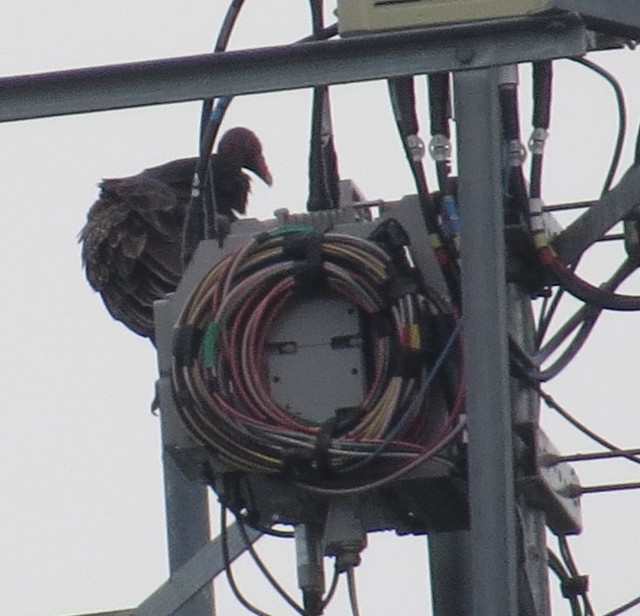 Zoomed in on the lower one. I don’t know what it’s doing, but probably it’s just perching. It’s not odd. Wait until you see the next picture.

This bird, I have no idea. I wish I understood this better. If anyone knows avian behavior or raptor behavior or carrion eater behavior, I’d love an explanation or reasonable hypothesis:

What is going on here? It’s acting like a chickadee! Except these guys weigh 5 lb. v. 1/2 oz for a chickadee. Crazy.

Enough crazy vultures. If you look at my Facebook page, this next section is old news. I just like to have it on the blog as an ongoing record. When it comes to outdoor photography I sometimes find I’m more of an accountant than an artist. But I saw this doe and fawn back in the woods at Pony Pasture Thursday morning.

In this picture, you can see the doe standing just to the right of the fawn. You can see the doe’s head and eye, and the fawn’s spotted rump. They’re hidden by leaves now, but only for another month or so:

In this one the mother’s put her head up, and you can see light shining through the fawn’s pink ear. And the line of white dots on its lower back:

Lots of birds are migrating; I snapped these two pictures of a Green Heron at Pony Pasture the same morning I took the pictures of those two deer. According to the time stamp from my camera, I took the first picture at 9:58:32 and the second at 9:58:34: 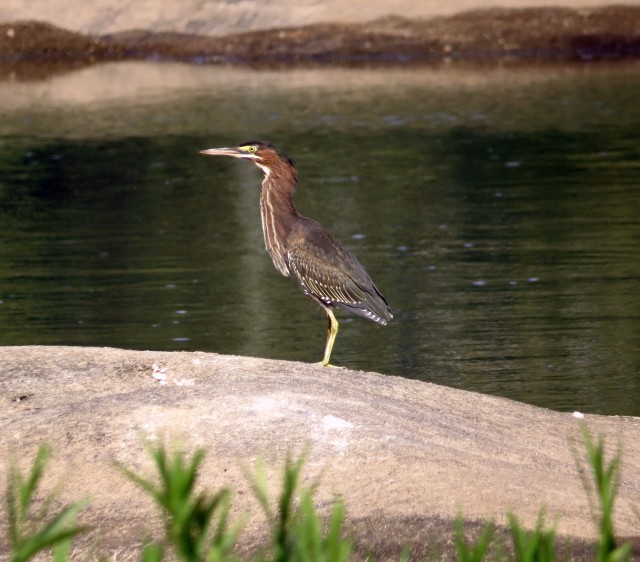 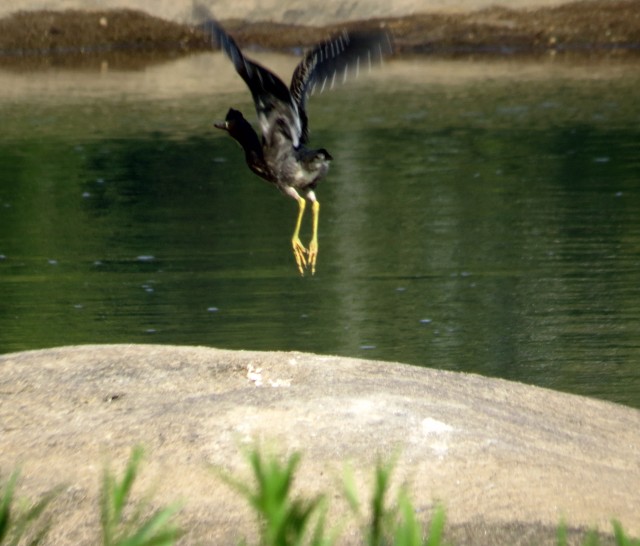 And away it goes

I hope at least some of the local hawks find our climate pleasant enough to stay here for twelve months, but I don’t know much about them yet. I suspect they may leave soon. The ospreys maybe have already left – I haven’t seen them this week. But here’s a Red-tail I saw Tuesday: 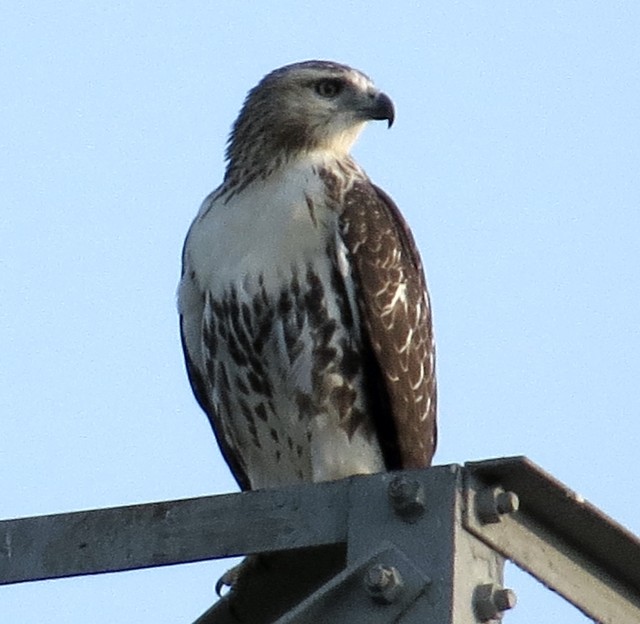 I never get tired of them. Sorry if you do!

I also discovered a new spot for Redtails this week – on a cell phone tower in the parking lot of the Westbury Pharmacy. The light wasn’t gorgeous and neither was the setting or the pose. As noted above, I’m more accountant than artist. I’m just fascinated that these beautiful animals are around here practically all the time. I was picking up some groceries at Kroger and I just look up and there they are. It is a treat every single time it happens. Here’s this lovely bird: 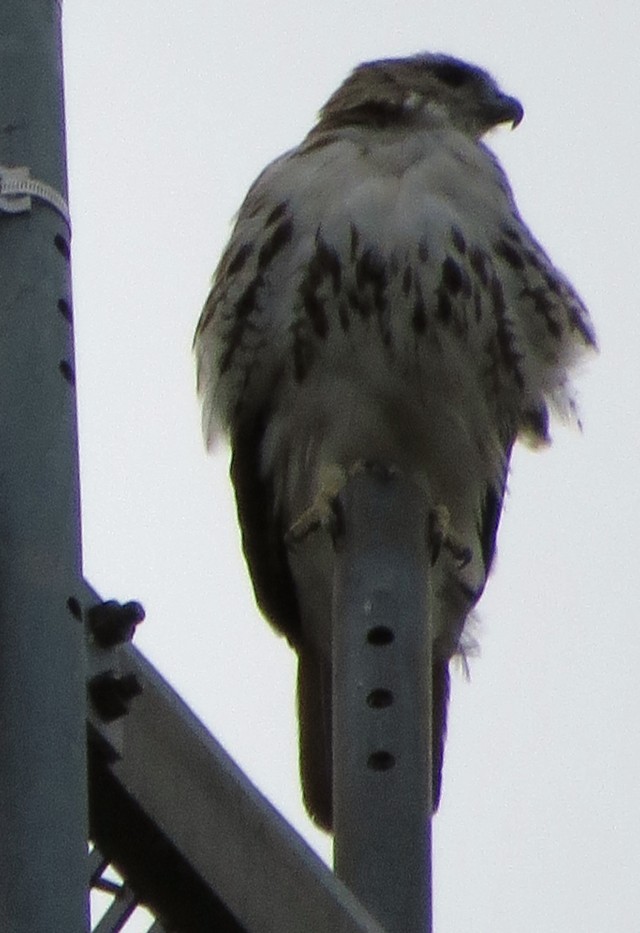 Red-tailed hawk gazing down at the parking lot at the Westbury Pharmacy (check out those talons; they’re hard to see but really cool)

I discovered the word “zugunruhe” in a remarkable book I’m reading, The Bluebird Effect: Uncommon Bonds with Common Birds by Julie Zickefoose. Incredibly – to me anyway – Ms. Zickefoose went to high school at Freeman! Then went on to Harvard! I think she lives in Ohio now. There are chapters about bluebirds and barn swallows and ospreys and starlings and mourning doves and chickadees and phoebes and dozens of others, and it’s illustrated with gorgeous water colors that Ms. Zickefoose painted. One chapter is called Touched by a Redtail and she wrote “…opening the door into his life, if only for a little peek, brought home to me that almost everything in nature is so much more awe-inspiring than it first appears.” Which if I’ve learned one thing from my ongoing Every living thing project, it’s that. I mean, you look at all of this stuff – algae and bald eagles and mushrooms and dragonflies and fawns and luna moths – and it’s all amazing just to glance at it. Then you go beneath the surface, you go a little deeper, read some more about it or observe some more about it or hear or see more, it’s as she says – “so much more awe-inspiring than it first appears.” I was amazed by it all when I first started and I’m amazed again each week. This week by Black vultures – who would have guessed?

I got lucky on a flower picture at the river this morning. I hope you’ll come back next week! All best,

Some of my pictures come out well

I am a rehabilitation counselor. I have many friends with autism and traumatic brain injuries. They help me learn new things constantly. I hike with dogs at the James River in Richmond - a lot. I've completed an Iron distance triathlon a year for 11 years. My most recent was in Wilmington, NC in November, 2013. I currently compete in mid-distance triathlons. And work and hike and take pictures and write and eat.
View all posts by Jay McLaughlin →
This entry was posted in Birds, Flowers, Fun, James River, Pony Pasture, raptors, Red-tailed hawks, Rivers and tagged Barn Swallows, bluebird, Flowers, Fun, james river, nature, outdoors, People, Pony Pasture, Red-tailed hawks, Rivers, smile, Smiles - human AND dog smiles!, whitetail deer. Bookmark the permalink.