cornucopia n. 1. Greek Mythology The horn of the goat that suckled Zeus, which broke off and became filled with fruit. In folklore, it became full of whatever its owner desired. […] [emphasis added]

This week has been a cornucopia of fun. Everything I love – friends, dogs, bicycles, food, I even got to play with firewood! Full of whatever I desired! And then some!

Here’s a picture I actually took this morning at the start of the race at The University of Richmond (U of R):

University of Richmond, a few minutes before the start of the Men’s Elite Road Circuit this morning – the starting line

I took this picture moments later as the peloton made their way up the hill and out of the U of R campus:

A gray day with a LOT of color

From there we moved to the Carole Weinstein International Center (what better place) to watch some of the race on television.

This was the outdoor entertainment:

The next several pictures are pictures I took of TV screens with my iphone. So the quality is weak. But what an incredible event to watch. I started out tepid and/or lukewarm about this, believe it or not. I enjoy riding but I’d not been so fond of watching people ride. I am now a permanent semi-rabid fan. It’s hard for me to understand what it feels like to be a pro football player or baseball player or basketball. I don’t even know what it feels like to be an amateur. But I’ve spent a lot of thousands of hours working hard on my bicycle and I have a grasp of what these guys are doing. Or of the theory anyway; these guys don’t look much different than me and I’ve got a nice bike too but man. 26 mph.

When we got indoors to watch it on the monitor the leaders had nearly 250 kilometers remaining. The entire race was “only” 261.4 kilometers (162.4 miles) long, so they were just getting started. In this picture they’re climbing the cobblestones on Libby Hill for the first time:

Picture of a TV picture of the cyclists climbing the cobblestones on Libby Hill for the first time today.

Here’s another picture about 44 kilometers (27 miles) later, of the peloton going around the Lee Monument on Monument Avenue here in Richmond:

I just love seeing this in Richmond. I drive there in my car nearly every week. I think these guys were all breaking the speed limit!

This is the perfect time to insert that the winner (Peter Sagan, 25 y.o. of Slovakia) averaged an astounding 26.0 mph for the whole race. So that was around an hour later. I’ve said this in blog posts before; I hope you’re not bored with it. If you don’t ride it won’t make much difference. But if you do ride, and if you have a speedometer on your bike, you know what it feels like to go 26.0 mph. In my own case, it feels like you’re going down a really steep hill. From my perspective it is almost unfathomable to do it non stop for over six hours. As a human being who rides a bicycle a lot, it’s still hard for me to grasp. Fun, but wow. You should try riding 26 mph if you have an opportunity. I promise you will be shocked.

After we left U of R we went to our friend’s Ariel’s house with the dogs for a while and relaxed. Then home for a while, then we were off to Portico in Goochland for our friend Nancy and Larry’s wedding celebration. The race was on the TV above the bar; I have never seen so many Richmonders so riveted to a bike race. I was thrilled to see the finish. 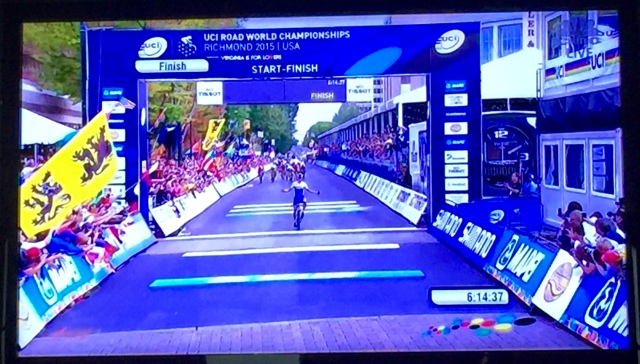 And a few seconds later; I was and am amazed: 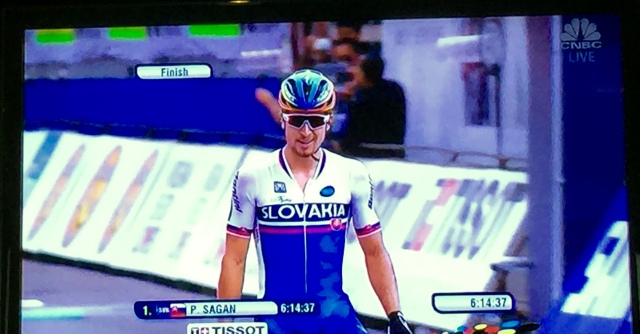 Look at that guy. That’s how I look BEFORE I get on my bike!

I started this post off with a “cornucopia” and I’ve only put one thing on it – the bike race. And I only put today’s race on it; the UCI World Championships have been going on all week. It’s been such a cornucopia I’m tired! We went to a great party yesterday at Tree of Life and Nancy and Larry’s wedding celebration at Portico was wonderful. They sent us home with homemade cookies!

I’ll be getting out on my own bicycle this week – although I won’t see 26.0 mph on my speedometer very often. There’s a hill by the lake at West Creek; I may see 26 mph for 162 feet. If I give it everything I’ve got.

Thursday is October 1! It’ll be cooling off soon. I have a nice pile of firewood to start the autumn; the first fire will be soon: 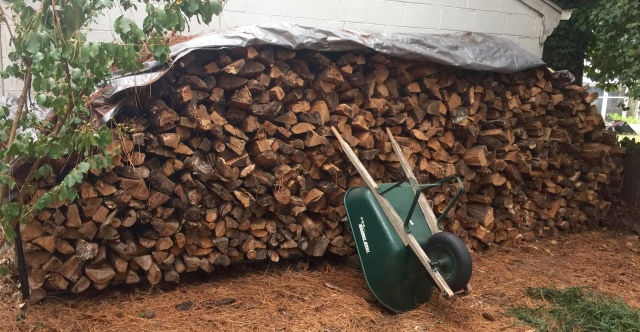 Fun way to start the cool weather. Thanks Tim!

All best until next week,

PS Oops! This just in. In a manner of speaking. Ev and I were in Carytown Saturday picking up a few items. First to the outstanding Carytown Teas; I cannot recommend it highly enough. Second to Sheppard Street Antiques; what Carytown Teas is to tea, Sheppard Street Antiques is to antiques. The customer service, products, atmosphere and location are without equal. Outside – on the last weekend in September – there was a clump of honeysuckle (my favorite flower) growing – and it smelled as fragrant as any June bloom. What a treasure: 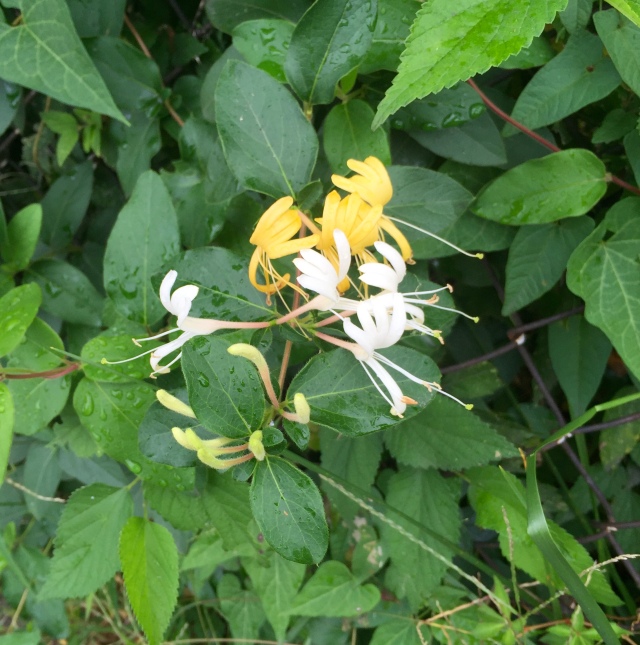 Delightfully summery & fragrant honeysuckle – on the final Saturday in September!

I am a rehabilitation counselor. I have many friends with autism and traumatic brain injuries. They help me learn new things constantly. I hike with dogs at the James River in Richmond - a lot. I've completed an Iron distance triathlon a year for 11 years. My most recent was in Wilmington, NC in November, 2013. I currently compete in mid-distance triathlons. And work and hike and take pictures and write and eat.
View all posts by Jay McLaughlin →
This entry was posted in Endurance, Fun, honeysuckle, Smiles (including "dog smiles"!) and tagged pro cycling, uci. Bookmark the permalink.