The dogs sniffed me suspiciously…

…when I walked in the door Tuesday afternoon. My friend Ethan and I were hiking at Bryan Park when we saw this crowd hard at work clearing invasive species:

Goats – get rid of invasives, get back fertilizer, milk and cheese. What could be more ecologically friendly?

If you want your dogs to sniff you suspiciously, go out and pet some goats. You will have your dog’s undivided attention when you walk in the door. Ethan and I talked to the goats a lot; I don’t know what we looked like. The goats replied though, and I did get that on camera:

I believe this goat is saying something obvious, but I don’t know what it is. I’d love to hear your thoughts.

I don’t know the names of the goats yet, but I’m learning. I will share that information in a future blog post. There’s a nice article about these goats at Richmond’s Lewis Ginter Botanical Garden. Read it here at Goats Eat Poison Ivy? Even if you don’t read the article, it’s worth clicking on to watch a fifteen second video of a nine day old goat named Solstice. If I’ve seen something cuter, I don’t recall when.

Goats clear all manner of invasive species, including but not limited to poison ivy and kudzu. From what I’ve read on the Bryan Park site, these goats are clearing Japanese Stiltgrass (Microstegium vimineum) and Porcelainberry (Ampelopsis brevipedunculata).

The goats are sponsored by the Friends of Bryan Park. They have a nice article on their website about the mission of the goats. Read it here at Goats in Bryan Park!

The goats are from Bright Hope Farm and Apiary in Chesterfield County. And they were cute! Bright Hope’s primary presence is on Facebook but you can also see them at that link.

We returned to the park on Thursday; the goats were working in a different section. We hiked around for a few minutes before we found the new spot. On the way we saw bluebirds! I first misidentified this as a female bluebird; I thought his colors were too dull for a male. But my sister Katie corrected me; I still have a lot to learn. He’s a handsome guy, perched here on a soccer goal at the edge of the fields at Bryan Park:

He’s a handsome guy, isn’t he? Shows up well against that green background.

Here’s an “accidental” image I took of two bluebirds together on the soccer goal: 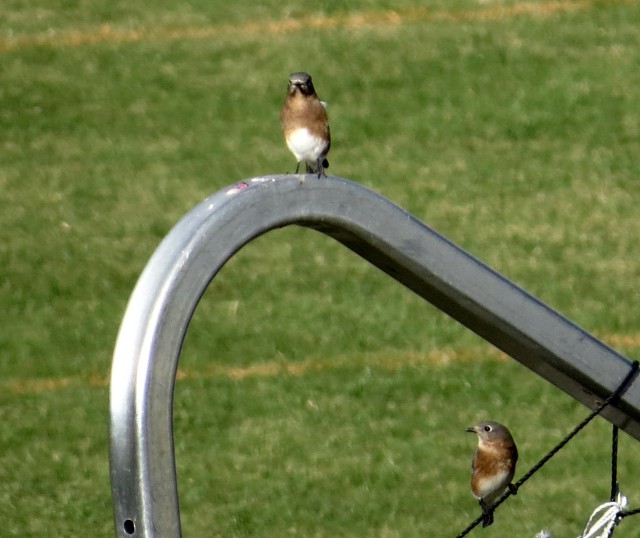 No one scored on them while I watched. But it did take two of them.

We saw an osprey twice that day at Bryan Park but I was unable to get my lens on it. I was certain the Richmond ospreys had headed south for the winter since the ones in my area have vanished. But there was a minimum of one osprey at Bryan Park this week. I’ll get a picture if it’s still around.

Speaking of birds I did photograph this week – unexpectedly – I saw a killdeer at Pony Pasture. It was way out on a rock, standing near an unattractive pile of goose poop. Killdeers are always attractive birds, though. Adult males and females are identical in appearance:

I wonder if killdeers ever think about Canada geese? This could have been a much more pleasant picture.

I also saw an Eastern Phoebe in Glen Allen on Wednesday morning. When I saw the wash of pale yellow below its wings I thought it may be some phase of a goldfinch. Then I read about phoebes on allaboutbirds.org and learned that “Birds in fresh fall plumage show faint yellow on the belly”. The more I learn about birds, the more I find out how much I still need to learn about birds. Read about them here: Phoebes on All About Birds 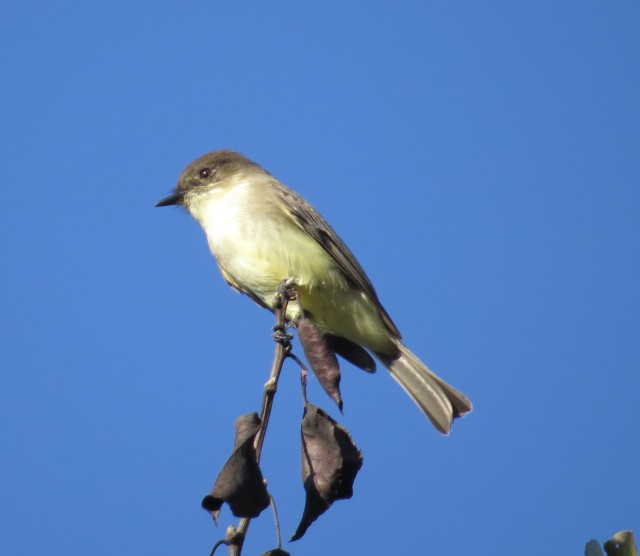 Phoebe in the Fall

One of the pictures I took of the phoebe was on a fence: 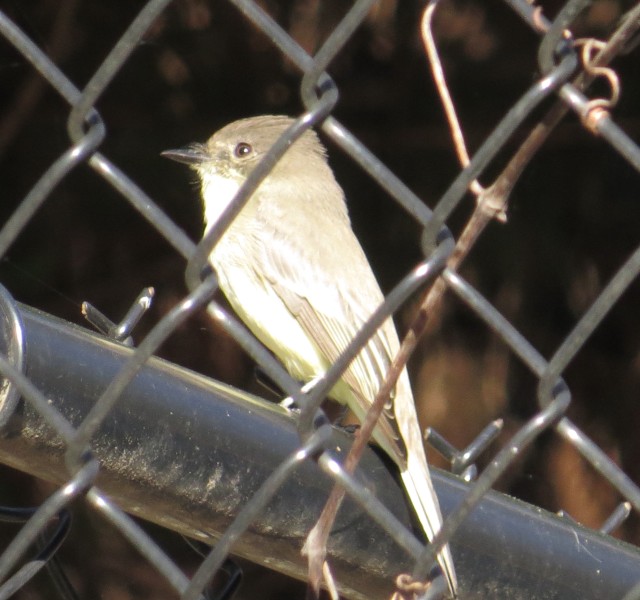 Perching on a fence line – just like it says in allaboutbirds.com

It’s possible I wouldn’t even have included that sub par image, had I not read this sentence on the All About Birds site: “The Eastern Phoebe generally perches low in trees or on fencelines.” There’s another automatic identification feature with phoebes – I’ve seen it all my life, but didn’t notice it that morning. This is what it says on All About Birds: “When perched, Eastern Phoebes wag their tails down and up frequently.”

Although the site says “frequently,” I believe “non-stop” is a more accurate description.

The neighborhood Red-tails show no sign of departing. Although I admit I don’t know what it would look like if they did show a sign. Here’s a picture I took this week:

They’re so handsome. Or pretty. They have presence.

I’m going to study some pictures more closely and see if there is an identifying mark that I can use to distinguish between hawks. They’re nearly identical at first glance, but I’m thinking there’s a way to tell them apart. When I figure it out, I’ll share what I’ve learned.

This squirrel was making an amazing amount of noise – even with this giant acorn in its mouth.

The moon was new (invisible) on October 12. The first tiny sliver was visible two days later but it was up during the day and I never saw it. I’ve taken a lot of pictures of it as it grew or “waxed” this week. Here’s one I took Tuesday evening (October 20) just after 9:00. It was officially half full (“First Quarter”) at 4:32 that afternoon:

Ev’s and my friends John and Maria from the Eastern Shore were in town this weekend. We had breakfast here (I fixed oatmeal, yum) and Maria brought coffee! Really yum! She brought it from Brazil; they don’t carry this at Starbucks:

On hiatus from Starbucks. Thanks Maria and John!

And she left the rest of the bag for our personal use! And since I’m the only coffee drinker here, I have it all to myself! Thanks Maria and John!

I didn’t take my camera with me to Pony Pasture this morning because I become very anti-social when I take photographs. It was fun to show the jewel of our fair city to people who have never seen it before. Hopefully they’ll come again soon! But we also have an invitation to visit them on the Eastern Shore, so perhaps I will have pictures from there.

Until then, I hope you have a great week!

I have a lot to write, and ideas where to go, but I haven’t written any more this week.

The only place to go next is with my family. Telling the story of my life without the influence of my family is like drawing an outdoor scene and forgetting to include the sky. So my family will be next (briefly) – but not this week.

I am a rehabilitation counselor. I have many friends with autism and traumatic brain injuries. They help me learn new things constantly. I hike with dogs at the James River in Richmond - a lot. I've completed an Iron distance triathlon a year for 11 years. My most recent was in Wilmington, NC in November, 2013. I currently compete in mid-distance triathlons. And work and hike and take pictures and write and eat.
View all posts by Jay McLaughlin →
This entry was posted in Birds, coffee, goats, James River, moon, People, Pony Pasture, raptors, Red-tailed hawks, Rivers, squirrels, Starbucks and tagged bluebird, bryan park, coffee, Fun, goats, james river, nature, outdoors, phoebes, pictures of the moon, Pony Pasture, Red-tailed hawks, Rivers. Bookmark the permalink.

2 Responses to The dogs sniffed me suspiciously…