I first drafted this post earlier this week when it was 60º and balmy. As I sit down now on Sunday afternoon for the final draft, I look out my window at a cold gray sky and a snow-covered front lawn. The blog post, of course, is about three summer weeks I spent in Guatemala a quarter century ago (1992). When the dogs and I were walking through the snow at the river this morning I thought how impeccable my timing is to be blogging about summer in Central America on a snowy January day in Richmond. The Guatemala story is at the bottom of the post.

A few pictures from this week first.

Red-bellied woodpeckers disappeared around here (or at least I didn’t see any) for it seems like a year. Suddenly this week for some reason they’ve popped up again. This isn’t a spectacular picture, but it’ll do. Hopefully I’ll get a better one soon:

This little White-throated Sparrow was at Bryan Park:

So was this bluebird:

And a Dark-eyed junco!:

No doubt everyone’s had their fill of my obsession with Red-tailed hawks. Shoot, even I’ve had my fill of my obsession with Red-tailed hawks! But look at the bright side, they’re not at Bryan Park! Usually. They weren’t around as often this week, though I did “get” one Friday. Also on Friday – half a mile from my house – I looked up and saw a hawk perched on a power line tower. That’s what Red-tails do, but I pulled over and snapped a couple of pictures anyway. The light was poor, but I could tell right away this was not a Red-tailed hawk (Buteo jamaicensis) but a Red-shouldered hawk (Buteo lineatus). When I set out on this obsession in May of last year it was difficult to distinguish between the two. From some angles it still is. But from the front, like this picture, it’s simple – Red-tails are white with a dark band, but Red-shoulders have these orange-y splotches:

From this angle, nobody makes a mistake about Red-tail ID:

Red-tail, with a couple of feathers out of place

Here’s a picture of Mackey at the river’s edge this morning during the snow. I called him a “reverse dalmatian” – black with white spots:

The snow was sloppy and wet but a snowy field is always pretty: 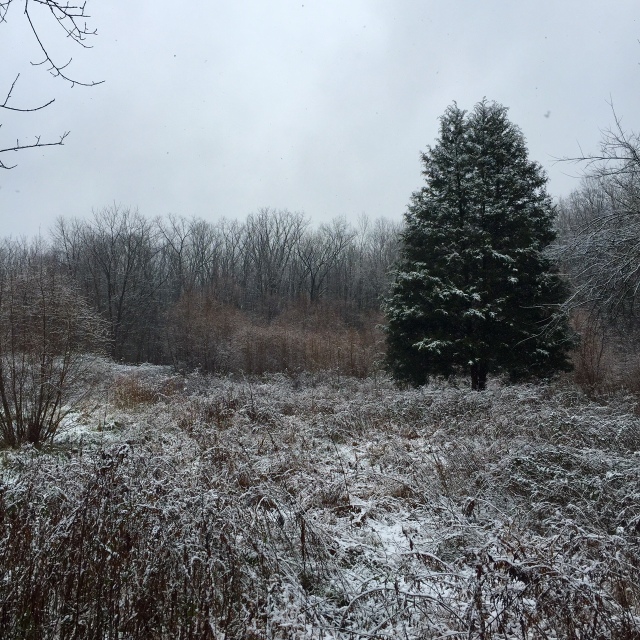 Back in the woods they were still full of beans: 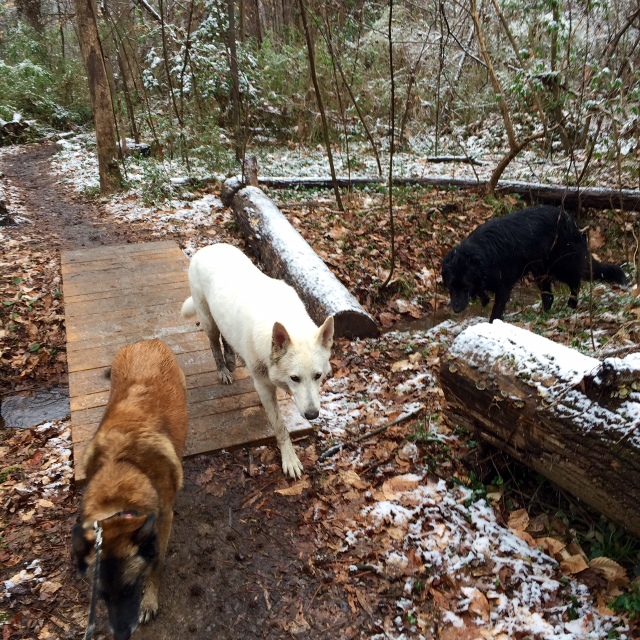 You just could not ask for better hiking companions. See Mackey on the right? Plus Yuki (white) and Turner (brown).

I left my camera in the car because it was snowing like mad. When we got around to the predictable spot (deer there nearly 100% of the time) there was a lone doe, and she was posing like she wanted to be on a magazine cover. But all I had was my phone. Here she is, zoomed in and blurry on my iphone. Her back is to us, you can see her tail hanging down. She’s got her head turned around to the left and she’s looking over her shoulder at us. She’s as calm as a monk. With my real camera, I would have lowered down to get her full face. This is a magazine quality image with the right camera, but not with an iphone:

See her in the center? Look at that white snowy diagonal log above her head – you’ll need it in the next picture.

To give you an idea of what we “really” see, this is with no zoom. Look way in the back of the picture, in the center, you can see that diagonally sloping snow-covered log. Directly beneath it you can see the white outline of her tail. They’d be practically invisible, but I’m positive I’ll see them, so they normally appear. 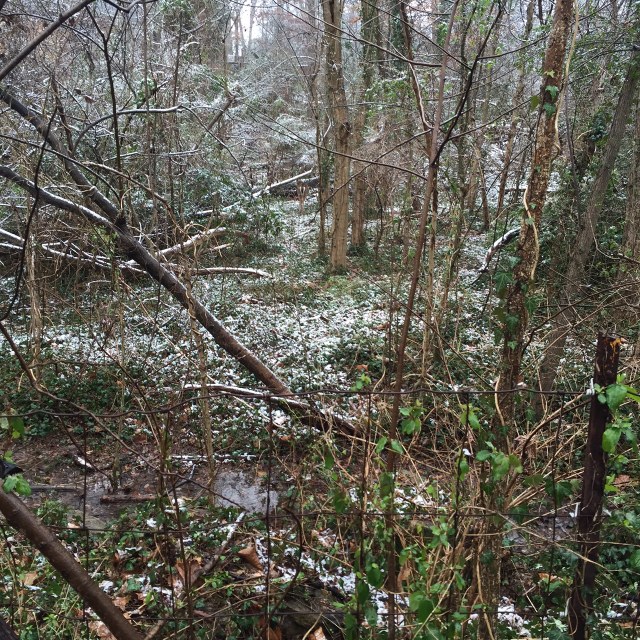 See her again? Under the snowy diagonal log? It’s not easy but she’s there. Look for her tail.

Yuki chose a higher and dryer path back to the car than we normally take, so we all followed him. In about ten seconds he and Mackey bolted into the woods and I saw my first buck at Pony Pasture in the past five years. He was accompanied by three big does and their white tails disappeared into the snow and trees and vines. Mackey and Yuki called the chase off quickly and sauntered back to the trail. Mackey has slept away the afternoon. He’s lying on his bed snoring about four feet away from me as I type this.

I’m looking forward to next week! I hope you are too!

We weren’t in Kansas anymore

In the summer of 1992 I traveled with my mother to Antigua, Guatemala. We lived in Antigua with a host family for three weeks while we took Spanish lessons and traveled a bit. People are more similar than they are different. But Antigua is much different from Richmond. Not even including the weather.

Here’s a picture of my mom (on the left) plus the woman who owned the house and her daughter. And five of our fellow students. Antigua is world-renowned for its Spanish language schools; people come from everywhere to study in Antigua. I’m looking through my journal now. There were people from the US (we stick out like a sore thumb) as well as from Denmark, France, Great Britain and Germany. Those were the only ones I met and spent time with. People come from many other countries. This is in the courtyard of the house where we stayed: 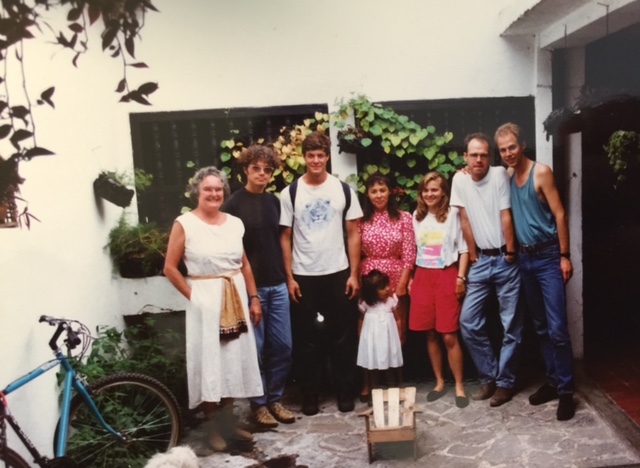 Mom on the left, the homeowner in the center, other students all around, bicycle and dog on far left. The courtyard of the house where we stayed.

Also on the left in that picture notice a blue mountain bike. I was training for a triathlon while I was in Guatemala and I rented that bike. I rode everywhere, including up a long, steep mountain. One of the French guys rented a bike and he rode up too. We’d ridden for a long, long time and a terrific storm came in. We turned around and raced for home but not soon enough:

Some friends (in the top picture) were in a different language school and they won a free trip to the beach for a weekend. They invited me along, and the first thing we did – before we went to the house – was go for a swim: 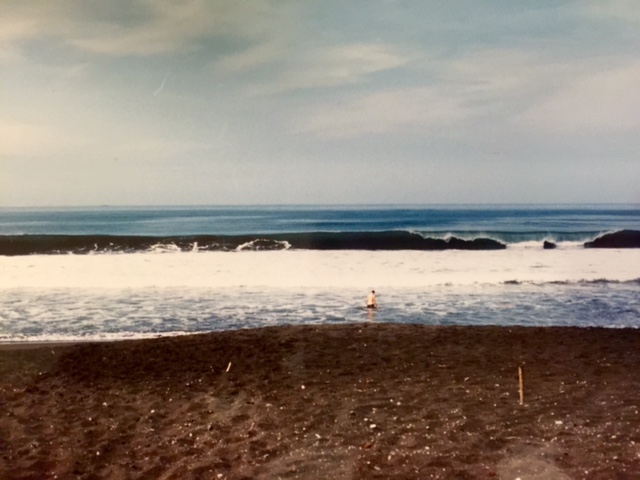 Black waves on a black sand beach at the edge of a black-sand town. All volcanic ash.

See that black wave? I swam way out past it, because I like to swim. When I was coming back in I got flipped under water and held down on the bottom. And held down on the bottom. And held down on the bottom. I can hold my breath for a long time, but I have limits. The water was 100% black from the black sand and the sun wasn’t out and I had no idea of where “up” was. Even as I type this twenty-four years later I recall it with absolute clarity. I remember thinking well I’m finally just going to have to inhale – I’m under water – but I’m going to inhale. And as I inhaled, my head was out of the water. And my feet touched the bottom and I walked through the surf and up to the hut and that was that. It was a big deal – it was life or death – and then it wasn’t. This was four years after my accident. I recall zero from my accident – not anything. So there was no fear. But I believe I came just as close to dying when I was scrounging around in that black water and I recall every microsecond. But nothing happened.

The town where we stayed was great – you walked everywhere. All the buildings, restaurants included, had thatched roofs and no walls. And stray dogs ran in and out, and chickens and turkeys and everything else. The surface of everything was black sand, just like on that beach. I’m reading my journal. There were lots of little dogs, maybe cocker-spaniel-sized mixed breeds. They’d walk around under the tables in the restaurants. I saw four that were clearly from the same litter. Same age, size, coat color, etc. Three of them had working limbs, and were scrawny and undernourished and sad looking. The fourth had a broken back and used its front legs to drag its useless back legs behind it. I recall this very clearly – it left a smooth trail in the black sand behind it, because its unmoving rear-end was sweeping the sand level. But here’s the thing – that dog was fat and sleek and healthy and bright eyed with shiny fur and a cheerful expression. It was obvious what was going on. This was a tourist town, and every person who saw that crippled dog felt sorry for it and gave it food – constantly. Nobody felt sorry for the “healthy” dogs so they had to scrounge for food, usually without success. It’s odd the way things work out.

In a future post I may write a brief note about time I spent at a “hogar” in Antigua. “Hogar” (as I understand it) means “home” and this place was the Guatemalan version of The Virginia Home. People with severe lifelong physical and cognitive disabilities lived there. The difference between our approach in the US and their approach in Guatemala informed my future in the field of rehabilitation. They’re fantastic in areas where we are entirely ignorant. But there are other areas of rehab where we could reform great swaths of Guatemalan culture. The rehab field may go out of business in some idyllic future, but it won’t happen in my lifetime.

I could write half a dozen posts about that trip. The reason it made it to this post in the first place was I was thinking (unsurprisingly) about birds. Once in Guatemala I spent a weekend on a boat and as I’ve mentioned before, I was training for a triathlon. Mornings I would do my swim workouts swimming laps around the boats. And I looked up for a breath and a flock of parakeets  flying over my head! Parakeets! I was so not in Kansas anymore.

Anyway, maybe in a future blog post. Have a great week!

I am a rehabilitation counselor. I have many friends with autism and traumatic brain injuries. They help me learn new things constantly. I hike with dogs at the James River in Richmond - a lot. I've completed an Iron distance triathlon a year for 11 years. My most recent was in Wilmington, NC in November, 2013. I currently compete in mid-distance triathlons. And work and hike and take pictures and write and eat.
View all posts by Jay McLaughlin →
This entry was posted in Birds, Bryan Park, Dogs, Fun, Guatemala, Pony Pasture, raptors, red-shouldered hawks, Red-tailed hawks, Rivers, Smiles (including "dog smiles"!), triathlons, whitetail deer and tagged bluebird, bryan park, Dogs, Fun, Guatemala, james river, nature, outdoors, People, Pony Pasture, Red-tailed hawks, Rivers, smile, Smiles - human AND dog smiles!, whitetail deer. Bookmark the permalink.