Kids threw poop at me. “It was twenty years ago today,” give or take a month. Not when I was a kid – when I was an adult. A few pictures (pleasant pictures), a bit of text, more about that first sentence at the bottom.

I’ve taken a few adequate pictures this week, but nothing I’m in love with. If I had to choose a favorite, it would probably be from today, when Mackey and Turner and Yuki and I hiked at Pony Pasture. It was a bit soggy and a bit sloppy but sunny and pleasant. The dogs have fun no matter what: 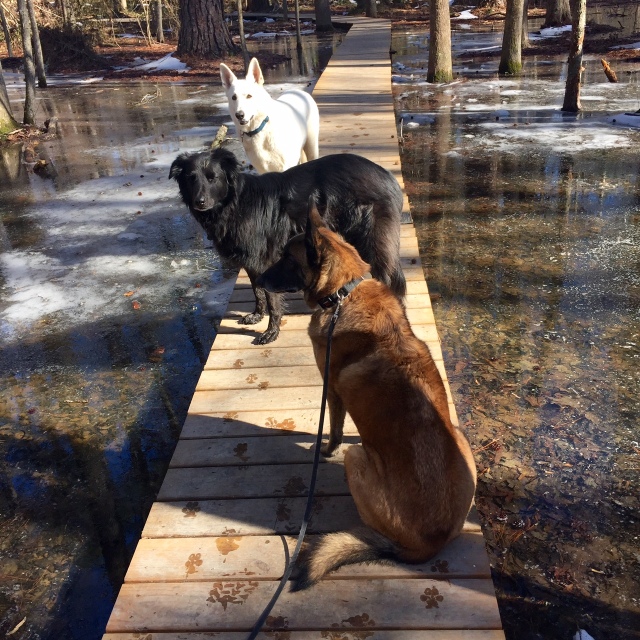 My Neapolitan boys taking a break, mid-hike. Boy we had fun today.

I just recalled I took one other reasonable picture today. I was in a place where I’d never seen deer before so I wasn’t ready. They are so fast. I had time to pick up my camera, flick the lens cap off and press the shutter three times before the deer vanished without a trace. Only one image had a deer in it! Here it is:

Deer in the center, running. Deer on the left, watching.

The deer in the center is moderately obvious, if you know you’re looking for it. She’s in mid-air, leaping from left to right and her white tail is pointing straight up. Then I saw a second deer in the frame. Possibly you’ve already seen it too. If not, look immediately behind her at the left edge of the frame. You can easily make out the front half of another deer, watching her run. You can see the other deer’s front legs, her ears and you can see her right eye in the sliver of space between two small trees. I’ll have my eyes peeled next time I’m in that area. But the deer change their paths when there’s snow on the ground.

There were lots of gulls on the river this week, much lower down (downstream, east of the rapids) than they’ve been so far. The river was a bit high today, just over six feet, but not terribly. I believe the water temperature or some other factor is making them move around.

Seagulls (mostly Ring-billed) on the James River at Pony Pasture.

I also believe the animals are detecting the slow advance of spring. It’s a long way off, but the sun is already above the horizon for forty-five minutes longer than it was in late December. It’s still cold and snowy and dark, but you’d better believe these animals are feeling the trend.

Speaking of animals feeling the trend, here’s a picture of a handful of mallards I took at Pony Pasture earlier this week: 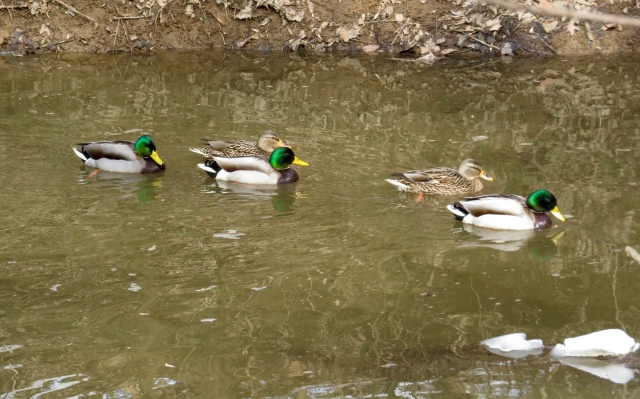 Mallards are flocking up on the creeks at Pony Pasture.

There were more mallards today – it was incredible – but the light wasn’t that pretty and the pictures were junky. The whole reason I was taking pictures today was the volume of mallards. In the same spot I took the above picture on Thursday there were twenty-seven mallards! It’s remarkable. I have a difficult time feeling good about Canada Geese – as ubiquitous as mallards or more – but mallards make me smile. Maybe it’s those green heads or that they’re always in pairs or something. We will not soon run short of  mallards.

Robins either, of course. We have 365-day-a-year robins in our temperate Richmond climate, but a few early migrants are flocking up as well. My friend Clark and I hike on the north bank of the river downtown in the early afternoon. So on pretty days, the sun is shining directly at it and everything comes out to warm up. I didn’t get any brilliant pictures, but here’s a marginal shot:

Some robins don’t wait for the snow to go away.

The dogs surprised a Great Blue Heron in the creek bed by the golf course at Pony Pasture Thursday. It popped up into a tree and waited for them to leave. 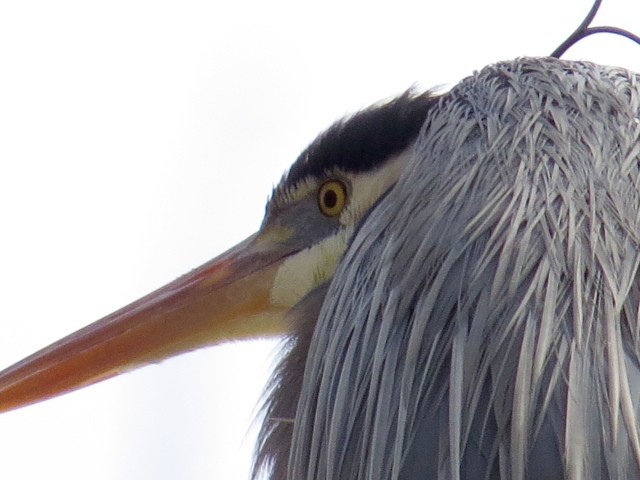 Can’t go a week without a Red-tail picture. I only became aware of them last May (2015) and began studying them then. And paying close attention. So I’ve still been thinking they’d head south for the winter. But this was the final week of January and they’re the most active they’ve been. I suspect this is pre-nesting behavior or pre-courtship behavior or something of that nature. The longer they’re here, the less likely it is they’ll leave. I haven’t seen a rabbit in forever, but there are practically as many squirrels in my neighborhood as there are mallards at Pony Pasture. Plenty to keep a Red-tail’s crop full: 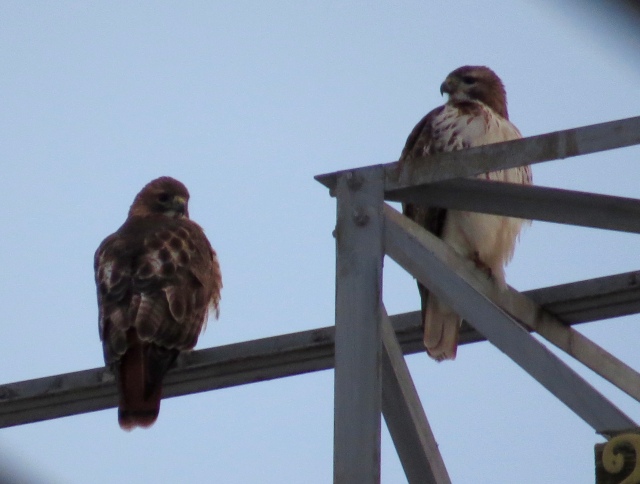 A pair of Red-tails wait for an unwary squirrel.

I mention this again below, but Evelyn has been encouraging me to dabble in memoir. When I was in rehab after my accident in 1988, the therapists asked me to keep a “memory log.” It got me in the habit of writing things down and now it’s almost 28 years old. If I printed it out it would stretch to the moon and back. This next section – and probably next week’s, and the week after’s – is excerpted from old journals. I hope you enjoy!

Around twenty years ago, I had a freshly minted Bachelor’s degree in Psychology and a brand new job working with kids with severe emotional problems. Here’s a journal entry from that era: “4/19/96 22:13 Fri 7607 [[my street address at the time]] Well, once again, I’m living in interesting times  [referring to the alleged curse ‘may you live in interesting times’]. [My job] is making them extremely interesting. I’ve got kids who eat too much, and use vomit and feces as weapons. I have a man who attacks men. I’ve got everybody. But sometimes they sing. And I play basketball with them.”

Evelyn has been talking with me about writing memoir, and given me good books to read. I’ve been journaling since my accident. Twenty years ago I was working in a school setting with kids with cognitive and emotional difficulties.

I’m fortunate to have old emails, and that I come from a family of writers. In May I wrote to my parents:

I probably won’t have nightmares about it, because I’m not a nightmare type person, but at the same time I’ll probably never forget the sight of [[a student]] walking out of that right-hand stall in [the big bathroom at work] today, zombie-like, a soft and putrid brown mound of his own feces overflowing out of each end of his hand. I’ve since learned that I need to give him choices, so I should have said to flush that back down one of those three toilets, but I just told him to flush it back down the toilet, so he threw it at me. My reflexes aren’t particularly fast, but his are even slower, so that initial launch landed in a blob on the edge of the sink. I was still clean up until that point, but when he attacked me, it was all over. Scratch one new shirt from Eddie Bauer. I didn’t need those top buttons anyway. I’m glad I was able to keep him from biting me. I was glad when [a supervisor] happened to appear at the door.

We’ve got another guy there, […], and he’s attacked a lot of people, mostly males, and before he attacks, he asks them to puff up their cheeks.

I later wrote to my parents describing the aforementioned incident.

Here’s my Dad’s response, in part:

Subject: Re: Crappy day at work

>We’re not going to have to do this very often in the future.”

Jay, you are truly a wonderful person. I am so damn proud of you it hurts to think about it. I don’t know what we did to have such a wonderful offspring. We lose people in the squad when a pt. merely craps in his or her diaper, (“Code Brown”) or pukes in their own lap (Code Green) and doesn’t get any on anybody.

At some point it will become more than you can deal with. Please take a time out the very first instant you feel that way (or as soon as you can be decontaminated). Then, take time to think of whether or not you want to step back into the situation.

Fortunately, you are “A&OX4” as far as I can tell (Alert and Oriented to time, place, date, situation), your pts are not. Maybe this is one of the things you learn on the 17 year plan. [My dad’s positive take on the length of time it took me to earn a Bachelor’s degree, what can I say]. However you learned it, you are a damn fine person and I am proud to know you. I think I need to get to know you better.

PS – Don’t rely on our Codes Brown, Yellow, and Green. They have other meanings in other organizations. Only Code Blue seems to be universal, it being the Ultimate Code for  us all.

I am a rehabilitation counselor. I have many friends with autism and traumatic brain injuries. They help me learn new things constantly. I hike with dogs at the James River in Richmond - a lot. I've completed an Iron distance triathlon a year for 11 years. My most recent was in Wilmington, NC in November, 2013. I currently compete in mid-distance triathlons. And work and hike and take pictures and write and eat.
View all posts by Jay McLaughlin →
This entry was posted in Birds, disability, Dogs, Fun, James River, Pony Pasture, raptors, Red-tailed hawks, Rivers, Smiles (including "dog smiles"!), whitetail deer and tagged disability, Dogs, Fun, james river, nature, outdoors, People, Pony Pasture, Red-tailed hawks, Rivers, smile, Smiles - human AND dog smiles!, whitetail deer. Bookmark the permalink.

6 Responses to Sergeant Pepper taught the band to play