Even the poison ivy looked pretty!

It was so gorgeous when we went to the river this morning, even the poison ivy looked pretty! And there is a lot of poison ivy at Pony Pasture right now. Not to worry; the riverbank is always covered with poison ivy in mid-April. Most of it will die back soon. Except for the tough ones.

I’ve gotten a few other pictures I’ve enjoyed this week – I hope you enjoy them too! My friend Ethan and I are regular hikers and photographers at Bryan Park, and we got a new (to us) bird this week! My friend Kim identified it for us as a Greater Yellowlegs (Tringa melanoleuca):

A year ago at Bryan Park I photographed my first Solitary Sandpiper (Tringa solitaria). Look at the similarity:

Solitary Sandpiper at Bryan Park, one year ago

Tuesday was the twenty-eighth anniversary of my accident, a day I’m always extra-happy to be alive. It was April and sunny and gorgeous and I didn’t have to work until afternoon, so Mackey and Turner and I went to Pony Pasture. I watched and photographed deer for nearly half an hour. They’ve become quite used to Mackey and Turner and me standing there watching them. They don’t ignore us – they watch us and listen to us the whole time – but they’re as calm and placid as a herd of cattle. My camera makes a tiny “beep” when it auto-focuses, and I often see an ear swivel toward us.

A trusting but wary deer at Pony Pasture. Part of a herd of at least four.

Hiking on the train tracks Wednesday with another friend we saw this Cedar Waxwing (Bombycilla cedrorum) within sight of the Tredegar Iron Works: 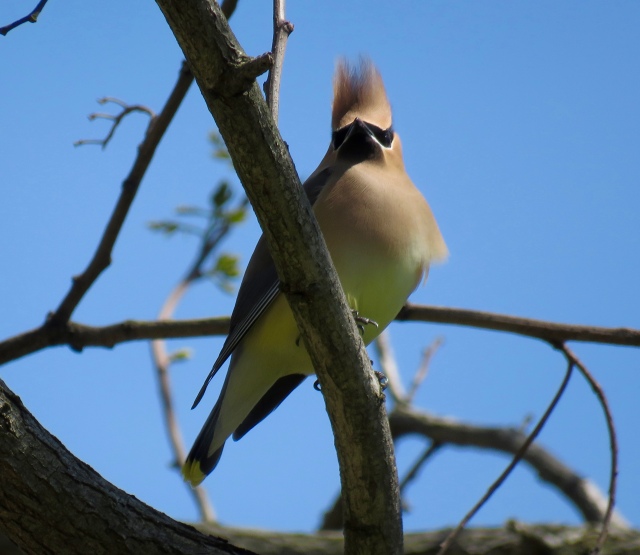 Cedar Waxwing on a wire near Tredegar Iron works.

I heard a familiar screech outside my house on Friday evening and walked out the front door and photographed my first neighborhood Red-tailed hawk for April. This image marks twelve consecutive months I’ve photographed a Red-tailed hawk within a one block radius of my house. Now that I’ve done it, it doesn’t seem very surprising. But if you’d come up to me in March of last year and said “you’ll be able to photograph a Red-tailed hawk in your neighborhood every month for the next year,” I would have said no way. Red-tails are really wild – they’re not like crows or pigeons or starlings or bluejays or mockingbirds. And my neighborhood is in every way tame. I am thrilled that we have resident raptors! Here’s my first April Red-tail, not exactly a pro-shot:

This marks one full year of Red-tailed hawks on Westbury Drive. I am so amazed and so gratified.

Speaking of neighborhood raptors. So I’m walking out the front door Saturday afternoon, heading over to a friend’s house for a party. As I step out on my front stoop, a Red-shouldered hawk swoops across at eye level and lands in a maple tree in my neighbor’s backyard! I had my camera (I always have my camera) and I snapped this quick image before it flew off:

Red-shouldered hawks compliment the Red-tails on our street:

I put together a quick memoir-ish blurb for this week. More to come, I hope.

PS Oops – I left off a picture of pretty poison ivy! You may disagree, especially if you’re highly allergic, but it looks fresh and pretty:

We didn’t get in trouble if we didn’t wake up our parents. When we grew up in Maryland, the kids rooms were upstairs and Mom and Dad’s room was downstairs. So as long as we were quiet – really quiet – we could have a lot of fun. One year one of my brothers was sick in bed. He was bored and we were bored. He had to stay in bed. Sometime in the mid-1970’s.

This is the house we lived in then. It was in suburban Maryland, just inside the Beltway near New Hampshire Avenue:

Home for most of my childhood. My brothers and my room was at that awning on the second floor on the left.

See the awning on the second floor on the left? That was the boys room. A double bunk for my brothers and a bookcase for a divider (our house was filled with bookcases, plus books on the floor) and my bed on the other side. My there was a bathroom upstairs, and my two sisters had a room on the right side upstairs.

We were creative, and we had one of these: 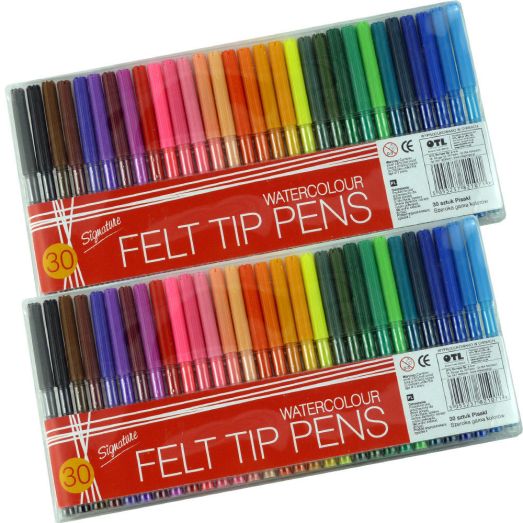 Multi-colored felt tip pens. This was what we used in the pre-tattoo era.

So when my brother was sick in bed, the rest of us started drawing elaborate designs on his stomach. What else was there to do? Peter Maxx was popular and my brother and sisters and I began an elaborate Peter Maxx-ish cartoon extravaganza. I don’t recall what all it contained, although I am certain this was crudely imitated in some area:

Plus, I’m sure, rainbows, birds, possibly dinosaurs, clouds, mountains, all the stuff that kids are great at drawing, especially in felt-tip marker on skin. We had button up pajamas – I remember perfectly – and we finally tired – probably ran out of space – and went to bed.

Since my parents are good parents, when you’re sick, they take your temperature from time to time. They checked my brother’s temperature late that night and it was very high – he’d been sick and was getting sicker. I’m sure our parents had a standard warning from our pediatrician that if one of our temperatures got above a certain point late at night, we should go to the emergency room. Sure enough, my brother’s temperature soared that night, and I’m guessing my father drove him to the ER while mom stayed home with us. And the doctors took off my brother’s shirt so they could put a stethoscope on his chest…

2 Responses to Even the poison ivy looked pretty!