Most people are nice

This is me with my friend Lee and his son Owen at the 2016 Anthem Moonlight Ride yesterday evening. Before we left Lee fixed dinner for the three of us and we hung out and discussed our strategy. Little did we know there would be a one hour delay due to lightning and a heavy downpour! But it cooled things down considerably for our ride.

Also – I’ll insert here – Lee’s father and Owen’s grandfather is a blog follower – and he put a note on a recent post that I haven’t yet responded to! So I’ll use my bully pulpit and respond right here – he’ll understand – and next time I’ll respond directly! I put up a post in July called Owls yawn – whoo, whoo, whoo even knew? Bob made a very nice comment about my photography and suggested I submit some to the Virginia Wildlife photography contest. I already had a photo published in Virginia Wildlife! And of course I put it in this blog! You can see it again at this post from November 9, 2014, Greenspace.

I drafted (in my head) this blog post several days ago. I’ve been reading about anger and acrimony in our country and I just never see it – ever. I know it exists (or at least I read that it exists) but I don’t see it.

Here – apropos of nothing so far in this post – is a picture of a young whitetail buck. I clicked the shutter at 2:14 PM today, and he was resting about twelve feet from the trail in Pony Pasture near Charlie’s Bridge: 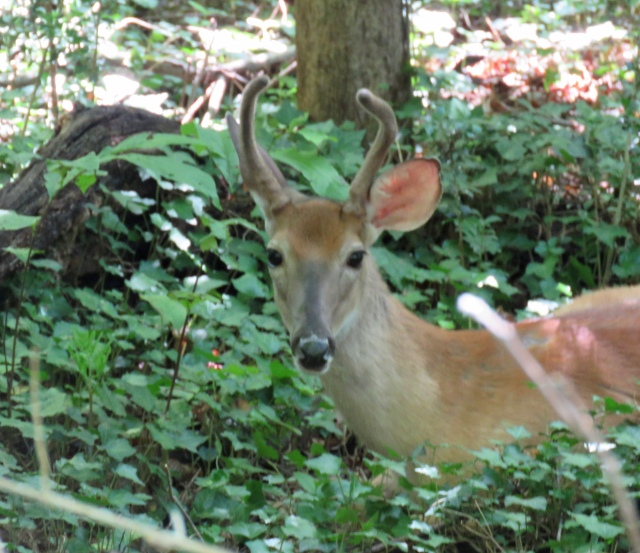 I saw two bucks at Pony Pasture today! Only got a photograph of one though.

And about seventy-five feet before that, I’d been clicking my shutter futilely at another small buck, similar in size and antler development. I’ve only seen one buck before this in all my years at Pony Pasture, and that one was an absolute monster – I suspect he’s the father of these guys. And today I saw two. That is just amazing. I don’t know enough about whitetail deer to confidently forecast how long these youngsters will stay in this area. But I’ll keep watching, and I’ll get better pictures.

The first picture on this post (top of the page) was taken just after the Moonlight Ride and I saw hundreds of people – there may have been thousands – and they were all nice. Same thing at the grocery store, the gym, most restaurants, coffee shops, work, the park, when I ride my bike, when I walk my dogs, in my neighborhood, nearly everywhere I go. My guess is around 85% of people are nice most of the time. I see and experience this – constantly – but I never hear about it. So, your mileage may vary, as they say, but if other people are meeting lots of mean people they aren’t telling me about it. So it’s my unshakable conviction that most people are nice.

At Pony Pasture on Tuesday I saw, for the first time I can recall, a Marbled Salamander (Ambystoma opacum). I believe this is a male, because their crossbands are white and the female’s are silvery-gray: 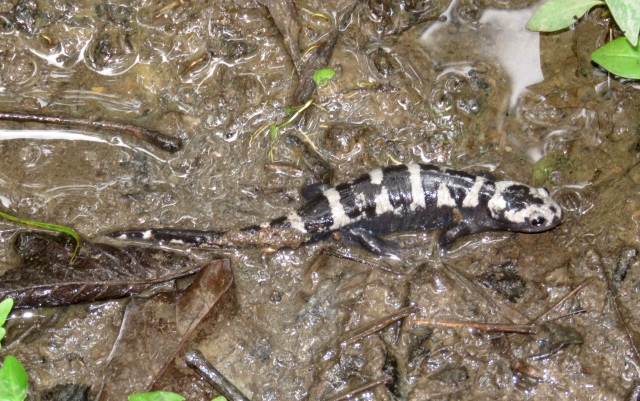 The dogs found him. They were real fascinated with something on the ground, they had their heads down and tails wagging, they find great stuff. That was a good catch.

Less good catch – but a good catch nonetheless – was I photographed three ospreys on the nest near Stony Point on Wednesday. The light was just awful, but three large raptors  on a nest is always a good catch. There were two when I got there, and while I was looking for a better angle, a third one swooped in. Again, the light is miserable, but among majestic sights in birding it’s hard to top a large raptor flaring its wings for a landing:

Osprey flares for a landing

Here’s another imperfect picture from Pony Pasture this morning, but it’s brighter. I’ve been hearing goldfinches at the field for around a month but only seeing them on the far side. Today they were on the same side we were and I got a moderate picture of two on the same plant: 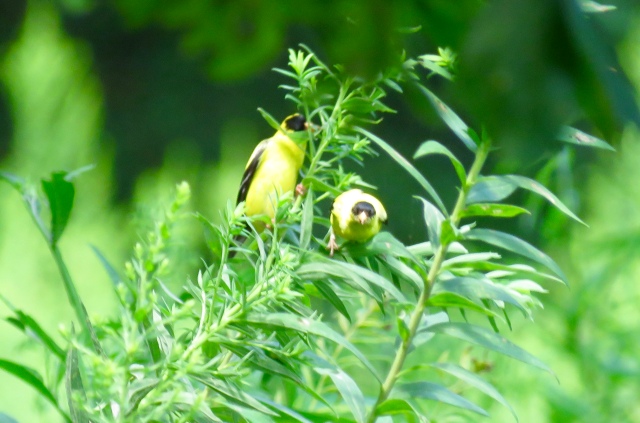 Two goldfinches in bright contrast with the green leaves

And while I’m on the subject of brightly colored birds, I was surprised to find myself Thursday morning, as I wrote to my friend Kim “standing in the midst of a large, noisy, swirly, boisterous flock of Prothonotary warblers.” I wrote that I “didn’t know this was an August thing” because I’d only ever seen Prothonotaries in April and May. Kim is more expert about things flying and hopping and crawling and swimming around Pony Pasture than I’ll ever be, and she wrote back that “Everybody has kids getting big and getting ready to migrate – some are starting already! 🙂” Here’s the image I got:

Part of the beauty of being a fifty-two week a year hiker at Pony Pasture is you can mark the seasons by the plants and animals that are out at different times of the year. Buffleheads – a signature duck at Pony Pasture in winter – there are probably none within a thousand miles in August. But fat chance photographing a spiderweb when there’s ice on the edge of the river. Strictly a summer phenomenon, and even then you’re lucky. This symmetry is so precise it almost doesn’t even look natural!:

Look at that precision. How do they even do that? How did evolution select for that?

Seven pictures so far in this post, and with the possible exception of the spiderweb, all are able to move for themselves. I’ll close with a more firmly rooted beauty, another treasure that’ll be long gone when the buffleheads skid on to the river in two months: 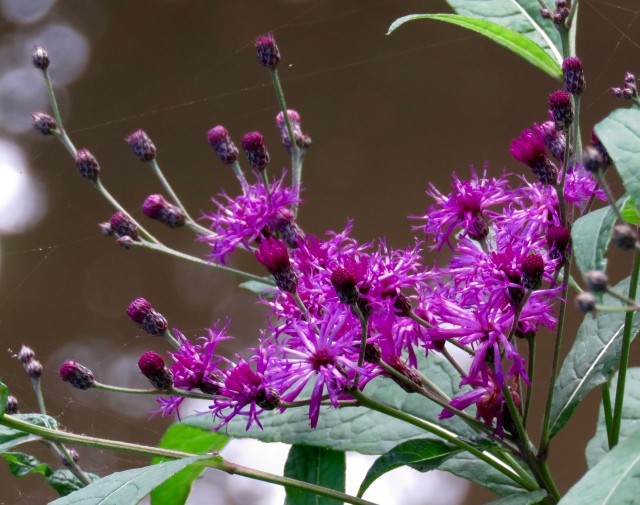 Lots of color in this post – very cheerful and fun!

I’ll be back next week! More than likely! I’ve tacked a short blurb about my opinion of most people on the end of this post. I hope you meet some nice people this week! I expect you will. All best,

Most People are Nice

I don’t watch television news but I read the New York Times constantly and regularly tune my car radio to National Public Radio. And I hear a lot, lot, lot about people who aren’t being nice. I’m sure they’re nice people, but what is often reported in those two news sources is not nice.

I am a rehabilitation counselor. I have many friends with autism and traumatic brain injuries. They help me learn new things constantly. I hike with dogs at the James River in Richmond - a lot. I've completed an Iron distance triathlon a year for 11 years. My most recent was in Wilmington, NC in November, 2013. I currently compete in mid-distance triathlons. And work and hike and take pictures and write and eat.
View all posts by Jay McLaughlin →
This entry was posted in Birds, Endurance, Flowers, Fun, James River, People, Pony Pasture, Rivers, Smiles (including "dog smiles"!) and tagged buffleheads, Dogs, Endurance, Flowers, Fun, james river, nature, Ospreys, outdoors, People, Pony Pasture, Rivers, smile, whitetail deer. Bookmark the permalink.