I held hands with STRANGERS!!!

That’s where my thirty year career as a triathlete led me last night and Friday night.   Standing in a circle around a dining room table filled with food, holding hands with people I’d never met, in a house I’d never been in, giving thanks for the best meal I’d ever eaten. After you’ve held hands and given thanks and eaten a meal with strangers, suddenly, they’re not strangers anymore. I’ll admit I never saw this coming. My friend Travis graciously invited me to stay with him and his family while we both raced in the Outer Banks Triathlon in Manteo, NC this weekend. So I knew him, but I’d never met his wife or kids or sister or brother-in-law or nieces, nephews, parents, etc. And before we ate dinner we all held hands and gave thanks for the food and they welcomed me into their family for the weekend – I was so moved.

I did two short races; Travis did one really long one. Really long as in, if you add the distances of my two short ones together, they’re still not as long as the one Travis did. And I got to have a delicious meal and a good night’s sleep between races!

Since I had such great food and lodging and support I was able to complete both short races. One Saturday, one Sunday. You got a special race number if you were doing both races. Another stranger I met on the course Saturday didn’t know what the special race number signified, and she asked me about it. I said “it means I do one race today and another one tomorrow.” She furrowed her brow and cocked her head to one side and asked in a sympathetic voice “Did you lose a bet?” But you got one medal for the Saturday race and a second for the Sunday race and a special third medal for doing both. Here they all are: 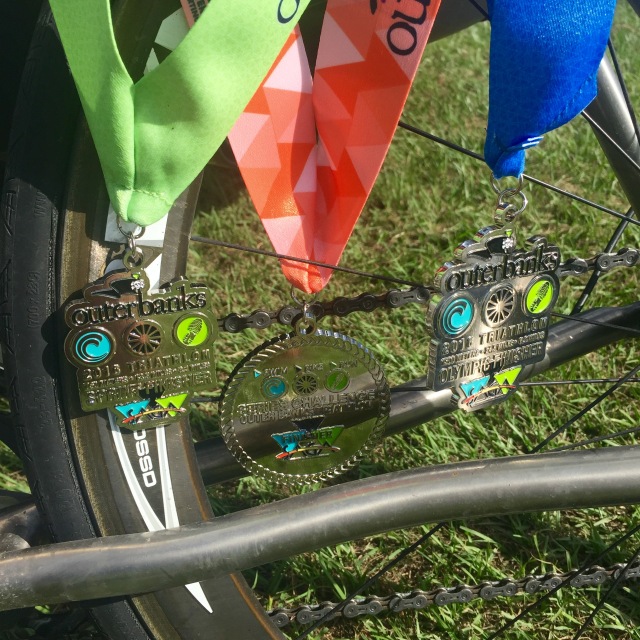 Lots of loot for less effort than Travis put out!

This is the house Travis and his family welcomed me into this weekend: 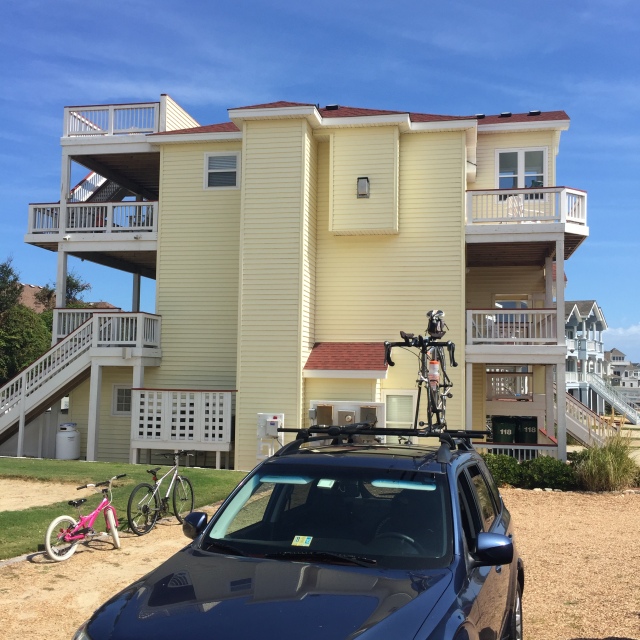 Two weeks ago I wrote about the “Infinite intangibles” that accompany the triathlon experience. At that point, the idea of holding hands with strangers had not crossed my mind. That’s why there are infinite intangibles. Spectacular sunrises are somewhat more predictable, but every one is amazing. This is what I watched this morning before my race: 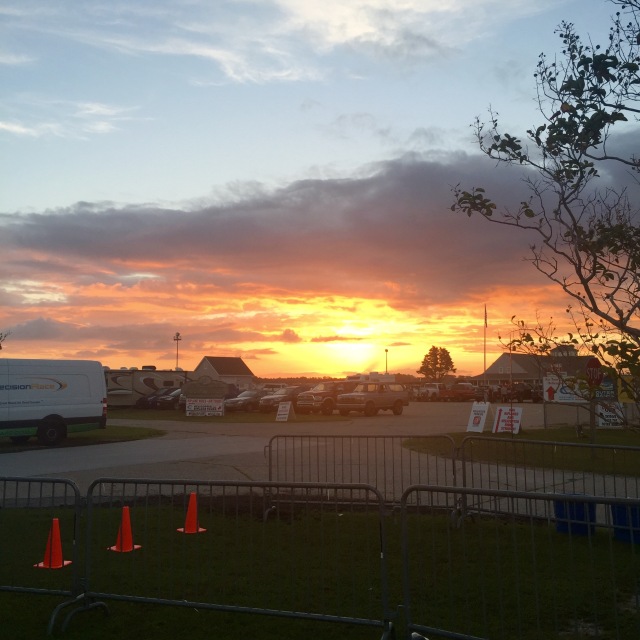 I mean, look at that. Just to be there to watch that happen is worth all the training.

This is a picture of me that Travis’s mother took (I think that’s who took it – if it was you and you’re not Travis’s mom, let me know) after the first race: 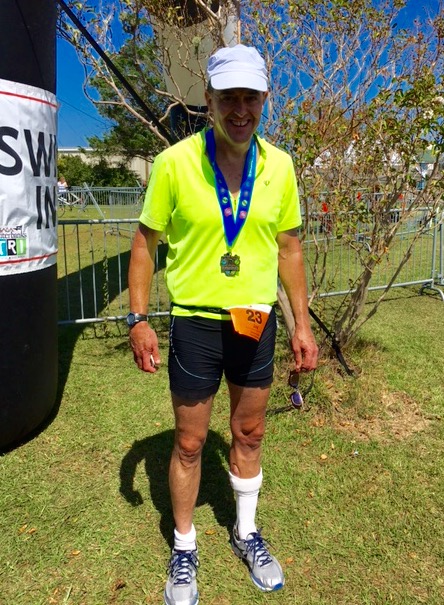 One race finished, one to go

Then – so many more intangibles – I had other friends from Richmond who knew nothing about triathlons – and were, by coincidence, in a house only 2.6 miles from Travis’s house. They invited me to stop by on my way home from Manteo. And they had even more strangers there, and they invited me in and we had a fantastic visit and they fed me even more delicious food! There’s probably a triathlon somewhere in the world every weekend. Maybe I should just travel around and meet more new people and go to races. Here’s the second house I got to visit this weekend: 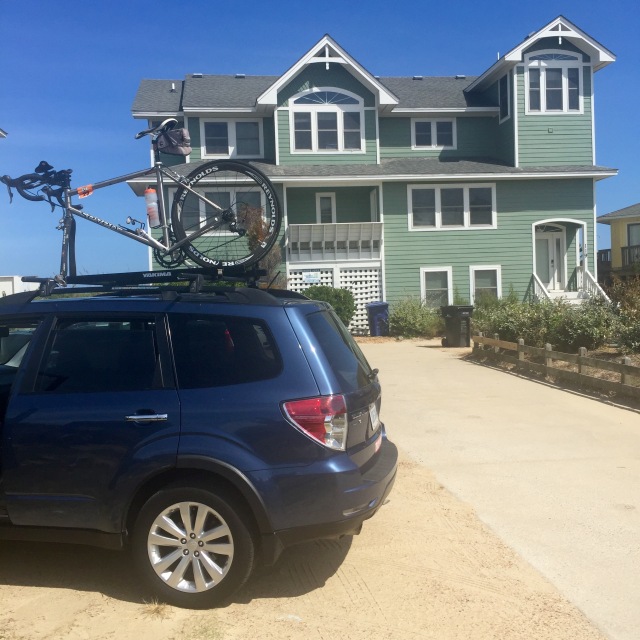 The SECOND house this weekend where strangers welcomed me – how excellent is that?

I was testing a new camera battery this week and turned around and snapped this picture. Turner on the left, Dash on the right: 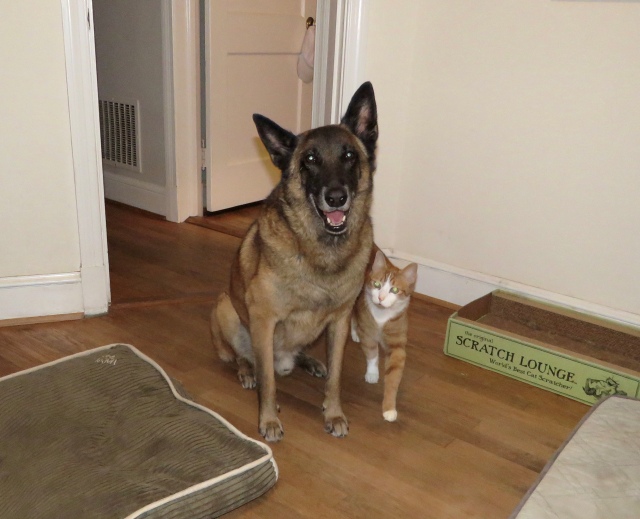 Turner and Dash, hanging out

I may put up another quick post tomorrow. Have a great week!

One more thing – on Saturday, my friend Andrew found me on the course in mid-race and let me walk his dog for a few minutes! This is about halfway through the 10k run Saturday, walking Andrew’s dog Kosar. Because if youo can’t enjoy yourself during a race, whey even bother: 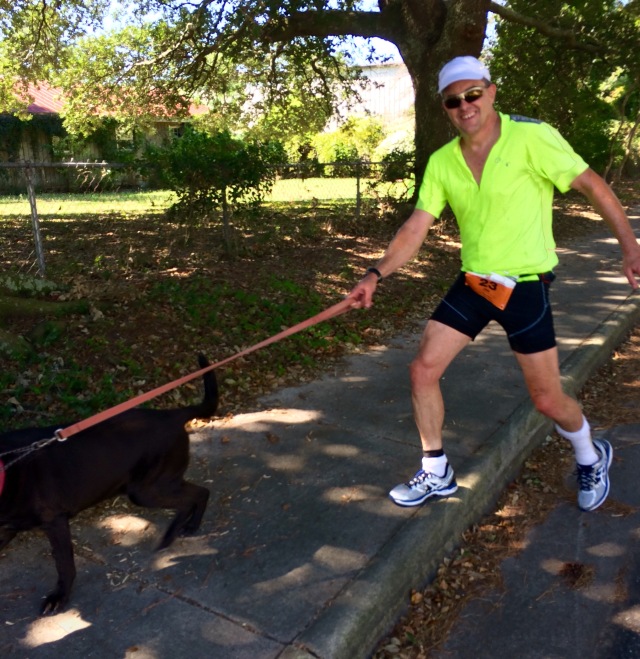 Walking a dog during a race – how much fun can one person have?

This just in too – another late breaking picture! Also with Kosar! And with his owner Andrew, and with our outstanding host and first time Half-Ironman finisher (swim 1/2 miles, bike 56 miles, run 13.1 miles) Travis. Picture taken by Travis’s mom Sharon: 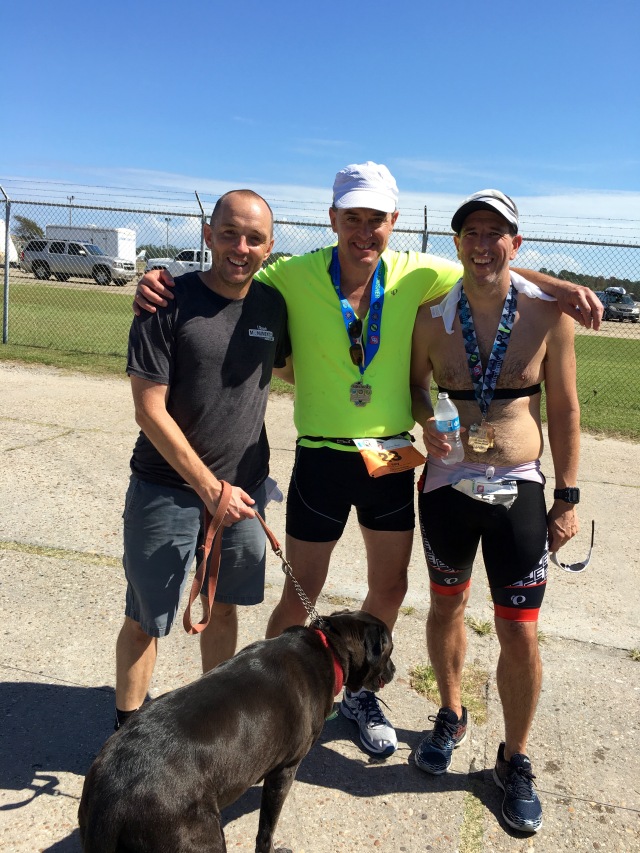 Three amigos and a dog – Andrew, me, Travis, Kosar

PS Only somewhat related to the events of this weekend – I stumbled across a quote earlier this week on the Albert Ellis Institute Facebook page. It certainly resonated in my own life, and when I’ve shared it with some friends, it’s been universally appreciated. So I’ll close with it because I believe it has value:

“The greatest weapon against stress is our ability to choose one thought over another.“ – William James

I am a rehabilitation counselor. I have many friends with autism and traumatic brain injuries. They help me learn new things constantly. I hike with dogs at the James River in Richmond - a lot. I've completed an Iron distance triathlon a year for 11 years. My most recent was in Wilmington, NC in November, 2013. I currently compete in mid-distance triathlons. And work and hike and take pictures and write and eat.
View all posts by Jay McLaughlin →
This entry was posted in cats, Dogs, Endurance, Fun, outer banks, People, Rivers, triathlons and tagged cats, Dogs, Endurance, Fun, People, Smiles - human AND dog smiles!. Bookmark the permalink.

2 Responses to I held hands with STRANGERS!!!