If you get bored with hawks (this post is overloaded), skip down to the bottom – you can see our Christmas tree!

The first mammal I ever killed and ate was a squirrel. I was hunting with my dad near our cabin in Page County, Virginia in the Blue Ridge Mountains in 1974, just after my thirteenth birthday. Whatever your opinion of guns or hunting or me or eating meat, much of the “me” that you know (if you know me) is formed by those experiences. I took this picture at Deep Run Park in western Henrico County, Virginia on Friday:

A squirrel on the left, one in the center, one on the right. I counted seven from where I took this picture.

The squirrels in our part of Page County in the 1970’s never saw a trash can or a bird feeder or a picnic table. The squirrel meat I ate was more organic and free-range and antibiotic free than the priciest cut of anything you’ll ever get from Whole Foods. This Red-tailed hawk was perched above the parking lot, calmly watching those young squirrels chase each other around the trees. I believe it had just consumed fresh squirrel:

This Red-tailed hawk at Deep Run is about to continue its own life by ending a squirrel’s.

It is unlikely that Pony Pasture will run short of squirrels in our lifetime. But squirrels are tough and mean, and they’re difficult quarry for a young Red-tail. The dogs and I were hiking at Pony Pasture Tuesday and when we returned to the parking lot, friends pointed out this young Red-tail perched on the information kiosk between the parking lot and the boat ramp. Sorry for the low quality; it flew to the ground an instant later:

Recognize that spot? If you’ve been in the parking lot at Pony Pasture you can’t miss it.

I didn’t understand what was happening while I watched, but realized later it was catching small subterranean mammals – much easier quarry than squirrels. It dug one out of the ground – while I was standing there – and carried it off to a tree to eat. Of course I had my lens cap on. According to the Virginia Department of Game and Inland Fisheries (VDGIF) Wildlife Information page, Virginia has a whopping twenty-five different varieties of small subterranean mammals! That number includes four different moles, eight different voles and a startling thirteen different shrews. I know next to zero about subterranean mammals in Virginia or anywhere else. Possibly only one of those twenty-five lives in Pony Pasture; I’m entirely ignorant. But that Red-tail was catching some sort of small subterranean mammal. My friend Kim is a wildlife rehabilitator and suggested a vole is the most likely candidate. What type of vole she didn’t say, though perhaps one variety is particularly common.

Here is a picture of that Red-tail on the ground – in pursuit of subterranean mammals. This is probably six feet from the pavement in the parking lot. I haven’t taken many pictures of Red-tails on the ground:

When you’re hungry, you go where the food is.

I took a few more  pictures of it when it hopped up on a low branch. Here is a nice picture of its head:

Viewed from the front, to my knowledge, there is no way to distinguish between an adult red-tail and an almost mature juvenile red-tail. Maybe by eye color. But if you can see the back (the top) of their tails, the difference is obvious. This bird was cooperative. I walked behind it and took a picture of its tail feathers. This is the tail of a juvenile Red-tail (the one at Pony Pasture Tuesday):

The next morning – less than twenty-four hours later – I was near Discovery United Methodist Church at the intersection of Gayton Road and Lauderdale Drive in Richmond’s West End. The cross on top of that church may be the most predictable Red-tail perch in this area, and Wednesday morning was no exception. I parked behind the bird so I could take this picture for comparison. This is why they’re called “Red-tails”:

I hunted with my Dad a few times, but mostly alone. Dad shot rifles and pistols and shotguns his entire life and he was a superb marksman, but I don’t recall him ever shooting an animal. He would have if the opportunity presented itself; dad was unconflicted about killing and eating wild animals. But I don’t think he ever did. He liked the precision and concentration and single-minded focus of target shooting. I was in the Junior NRA when I was growing up. We had target practice once each week on the rifle range in the basement of Montgomery Blair High School, a few miles from where I grew up.

Whatever your opinion of guns, it’s worth it to try target shooting for an hour or two if you ever have the opportunity. When you’re concentrating on the bullseye, every single other thing in the world just goes away. The mental control – and the breath control – involved in precise target shooting surpasses any other endeavor I’m aware of. This is the first sentence of the Urban Dictionary definition of zen: “One way to think of zen is this: a total state of focus that incorporates a total togetherness of body and mind.” That’s exactly what’s demanded by precise target shooting. Dad would have been open to calling it “zen”, because he was an open-minded man, but he would have chosen other words. Because he chose his words carefully.

The skill sets for good target shooting and good photography have a great deal of overlap. Likewise the skill set for good hunting and good outdoor photography. It’s also fun to sit here at my computer and see what birds appear on the feeders just outside my window. This tiny bird has been revealing itself slowly. I saw it for a couple of weeks but no camera. Finally I got this picture. It’s awful but my next one will be better. I’m excited because my friend Kim positively identified it as a Ruby-crowned Kinglet (Regulus calendula). They’re great birds. Soon I’ll get a better image:

This post has been short on color and long on raptors. I took a rare (for me) picture of three bluebirds on my feeder at one time: 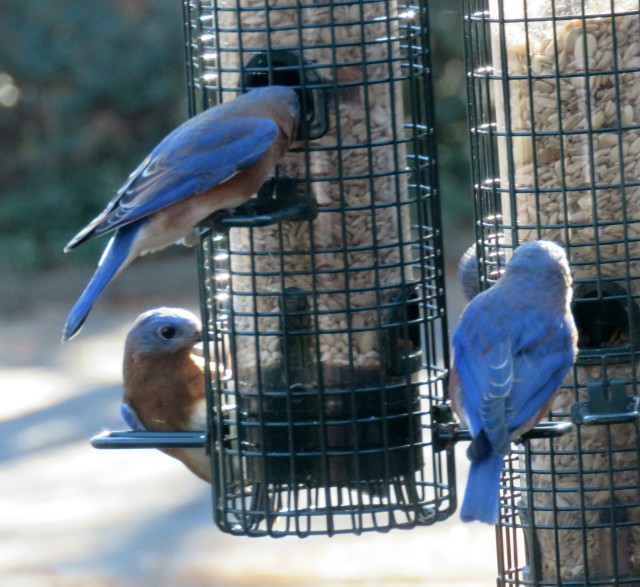 Three bluebirds at once – bright and cheerful.

Evelyn and I put up our Christmas tree yesterday. We bought it on a lot my old friend Ethan introduced me to, over on Laburnum at the Linwood Holton Elementary School. I used to buy my trees from Home Depot (not that there’s anything wrong with that) but Ethan was always much more environmentally and socially aware than I was. He suggested that rather than putting more money in the already overloaded pockets of yet another big box retailer, I keep it in our local economy. Here is the tree after we decorated it and put it up:

Our Christmas tree. We put candy canes on after I took this picture.

Evelyn found a couple of Dad’s old Christmas decorations; these two are on the tree:

A week from today is Christmas! I’d better get started shopping!

Have a great week, hope you’ll check back next Sunday.

I am a rehabilitation counselor. I have many friends with autism and traumatic brain injuries. They help me learn new things constantly. I hike with dogs at the James River in Richmond - a lot. I've completed an Iron distance triathlon a year for 11 years. My most recent was in Wilmington, NC in November, 2013. I currently compete in mid-distance triathlons. And work and hike and take pictures and write and eat.
View all posts by Jay McLaughlin →
This entry was posted in Birds, Fun, James River, Pony Pasture, raptors, Red-tailed hawks, Rivers, Smiles (including "dog smiles"!), squirrels and tagged bluebird, Fun, james river, nature, outdoors, Pony Pasture, Red-tailed hawks, Rivers, Smiles - human AND dog smiles!. Bookmark the permalink.