The birds have been noisy – I misspoke. And the flowers are bright. Also perhaps you recall two weeks ago I put up a post called Accident anniversary / Singular encounter(s) / and more. It showed a Red-tailed hawk (Buteo jamaicensis) flying off a church cross, killing and eating a gray squirrel, then flying back to the cross – thirty-three minutes, cross to cross. That happened on April 5. Twelve days later – on April 17 – I drove past the same church again (Discovery United Methodist Church) and there was another (or the same, or possibly its mate) Red-tail on the cross. Here’s the picture I took on the 17th: 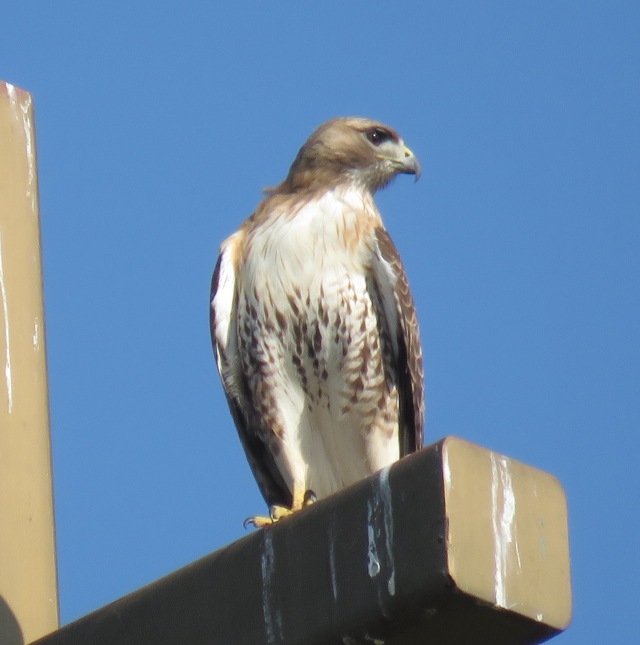 I learned just as I clicked, this hawk was looking at a chipmunk

This hawk flew down to a tree and in an instant killed a chipmunk. I have a picture of it on a branch with the chipmunk’s recently deceased body in its talons. For me it’s much more disturbing to look at a hawk-killed chipmunk than it is to look at a hawk-killed squirrel. I suspect it would be disturbing for others too and I’ll leave it out of this post. The hawk took 33 minutes cross to cross with the squirrel. It only took 4 minutes with the chipmunk. They were both remarkable sequences to watch.

Tuesday I saw an Eastern Towhee (Pipilo erythrophthalmus) just outside my window. All of my pictures (I only took four) were indistinct but this one is the least indistinct. I recall when we were growing up and staying at the cabin we’d hear them all the time but rarely see them. It’s the same way here in Richmond – I hear them a lot but almost never see them. You probably hear them too – it sounds like they’re saying “drink your tea.” At the cabin (this was primarily in the mid-1970’s through the mid-1980’s) we always referred to this bird as a “rufous-sided towhee.” Interestingly (to me) it says this in wikipedia: “The eastern towhee (Pipilo erythrophthalmus) is a large New World sparrow. The taxonomy of the towhees has been under debate in recent decades, and formerly this bird and the spotted towhee were considered a single species, the rufous-sided towhee.” Anyway, here’s my subpar shot; I’ll get a better one soon, I can feel it coming: 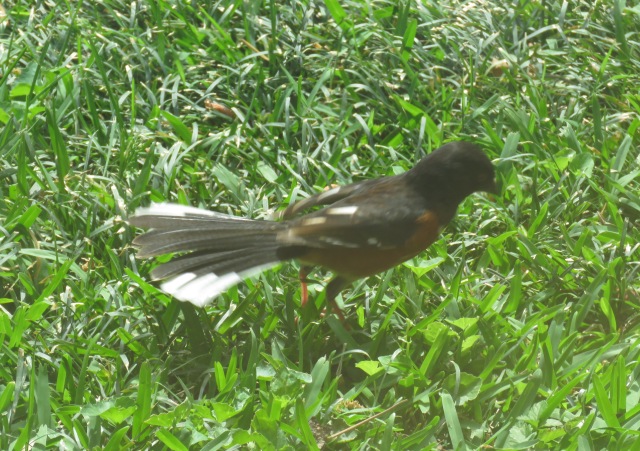 Disappointing quality Eastern Towhee image (but the bird was handsome)

If you follow me on facebook you’ve already seen the next picture. I don’t usually post blog pictures during the week but I was so excited about this one I put it up anyway. I got this groundhog Wednesday when a buddy and I were hiking on the North Bank Trail when we saw this guy (possibly girl) scrambling off the edge of the trail. It’s a groundhog (Marmota monax):

A lot of luck involved in this shot; I only managed to click the shutter four times between its appearance and disappearance

When you photograph an animal or bird a lot, you begin to predict when you’ll see them. It gets easier and easier. I think this was a one-off; I doubt I’ll see enough groundhogs to anticipate them. We’ll see.

This locust was flowering only about five minutes walk from the groundhog. If you see a locust blooming, make an effort to smell the flowers. I wish I’d caught it in better light. The smell of a blooming locust is one of the underappreciated treasures of Spring: 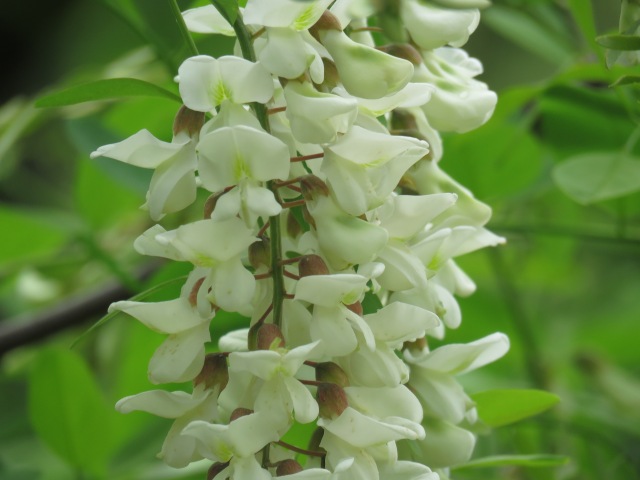 I am a connoisseur of Spring smells. These black locust flowers may be #1.

These multiflora roses at Pony Pasture (and everywhere else in town) smell beautiful, and they’re everywhere. I believe unfortunately they’re also invasive. So is honeysuckle, which will appear soon, and smell most divine of all. But multiflora roses are pretty and fragrant: 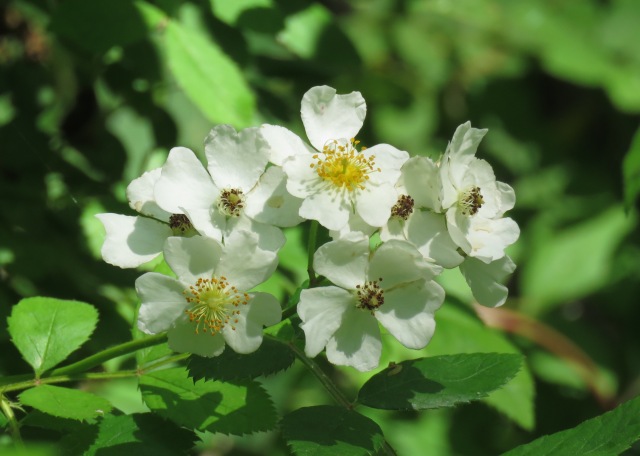 I saw mallards that day too, and my first dragonfly (I think) of 2017, although I didn’t get any blog-worthy pictures. The puddles were filled to the brim with tadpoles. Picture this density of tadpoles spread out over a puddle about two feet wide and four feet long:

This is a quick video (eleven seconds) of those tadpoles swimming around. It is in its way mesmerizing. You can hear birds singing while you watch:

Friday at the Tuckahoe YMCA I got a male Red-winged blackbird, obscured a bit by branches: 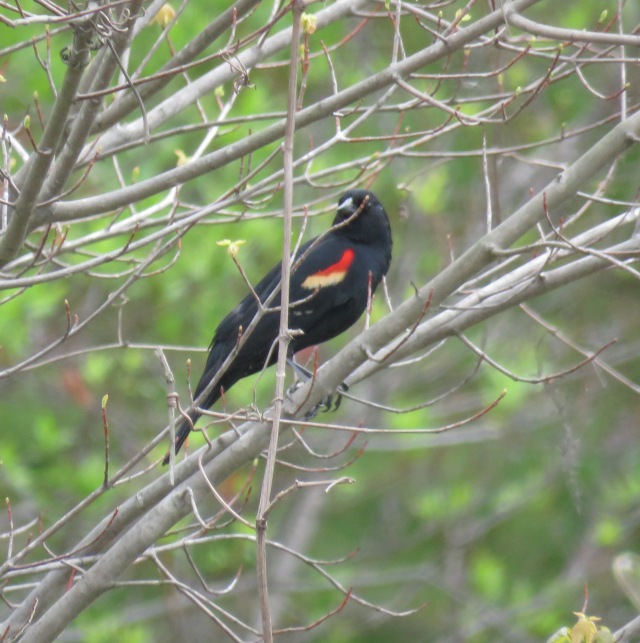 I took this picture from the same spot – this time a male Brown-headed cowbird (Molothrus ater):

Male Brown-headed cowbird in the grass

Yesterday I thought our Sunday hike might be a rainout so I took the dogs to the river to get some exercise. It was overcast and threatening, and if there were any birds or animals or insects around, they chose not to reveal themselves to us. But I did get to see the river in a light I don’t often see, and I find this image pleasing:

James River under a lowering sky

I didn’t love too many pictures this week. The groundhog was a good catch and that river picture is not bad. We’ll see what the final week of April has to offer. This was the last shot I took at Pony Pasture this morning. Mackey (on the left, black) is the most cooperative guy in the world, but it is real hard (for me) took take good pictures of him. I mean, look at this – how, of the three of them, is the only black dog the only one with a big dark tree behind him? He is such a good and handsome and elegant boy, though. Black goes with everything:

Mackey on the left (tree behind him) then Turner then Yuki

Have a terrific week, I hope to have more to look at for the final Sunday in April. All best,

PS I was looking at those tadpole pictures and they brought to mind a blog post I did on May 18 of 2014 called Mexican tadpole. It’s kind of a cool post, it may be worth a look. My mom had been in Mexico and she showed them a tadpole in one of my blog posts and learned the word. And it has a link, I’ll even supply it here, to a wonderful song from James Taylor in 1975 called Mexico.

I am a rehabilitation counselor. I have many friends with autism and traumatic brain injuries. They help me learn new things constantly. I hike with dogs at the James River in Richmond - a lot. I've completed an Iron distance triathlon a year for 11 years. My most recent was in Wilmington, NC in November, 2013. I currently compete in mid-distance triathlons. And work and hike and take pictures and write and eat.
View all posts by Jay McLaughlin →
This entry was posted in Birds, Dogs, Flowers, Fun, James River, People, Pony Pasture, Rivers, Smiles (including "dog smiles"!) and tagged Dogs, Flowers, Fun, groundhog, james river, nature, outdoors, People, Pony Pasture, Red-tailed hawks, Rivers, Smiles - human AND dog smiles!, tadpole. Bookmark the permalink.