My Dad enjoyed shooting rifles, pistols and shotguns his whole life. I did a lot of that from my early teens until I married in mid-1987, but slowed down after my accident in April of 1988. I continue to hunt and shoot whitetail deer in Virginia – with a camera. I hunt in Pony Pasture several times a week. Sometimes when I’m hunting deer I get lucky and bag a Barred Owl (Strix varia). This afternoon at Pony Pasture I got two Barred Owls! Not the best image I’ve ever taken, but have a look. I think that’s an adult on the upper right and a first-year owl on the lower left: 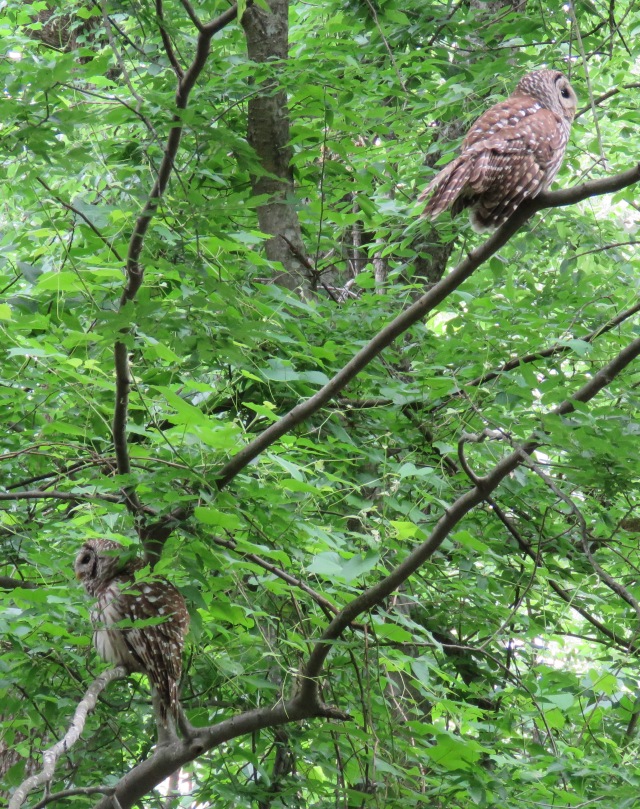 Two Barred Owls at Pony Pasture. One in upper right, one in lower left.

The owl on the upper right only stayed a moment. Not long enough for me to get a good position to shoot from, especially with all these leaves. The younger one stayed quite a while after the adult left. Here is the younger (I think) owl. It’s the one in the lower left on the first picture, anyway: 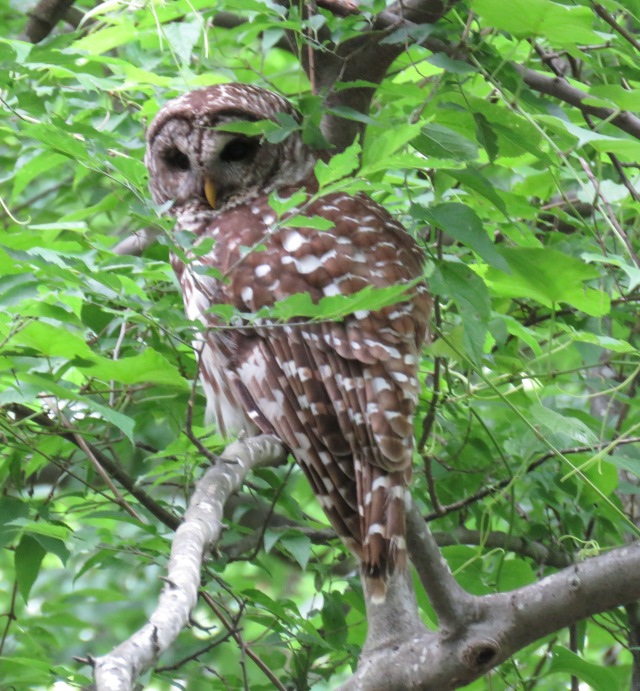 The younger owl tolerated my presence for longer:

I took both of those pictures by the place where the big concrete pipe goes across the creek. Two people started walking across that pipe and the second owl flew away.

To me, that’s part of the beauty of taking pictures in Pony Pasture. It’s a public place, and every living thing from the lichen on the rocks to the whitetail bucks in the woods knows how to thrive in the presence of humans. If I’m trying to get a picture of an owl or a deer and it leaves because some person walks along, that’s my tough luck. If I’d seen it earlier or in a more remote part of the park, I would have gotten my shot. The owls can accommodate the presence of pipe-hiking humans. As a photographer, I need to accommodate them too!

So I took the owl pictures early this afternoon (Sunday) at Pony Pasture. Ten minutes walk from the main parking area. I was almost precisely the same distance away except on the trail closer to the river on Monday afternoon. I took this picture around 2:00: 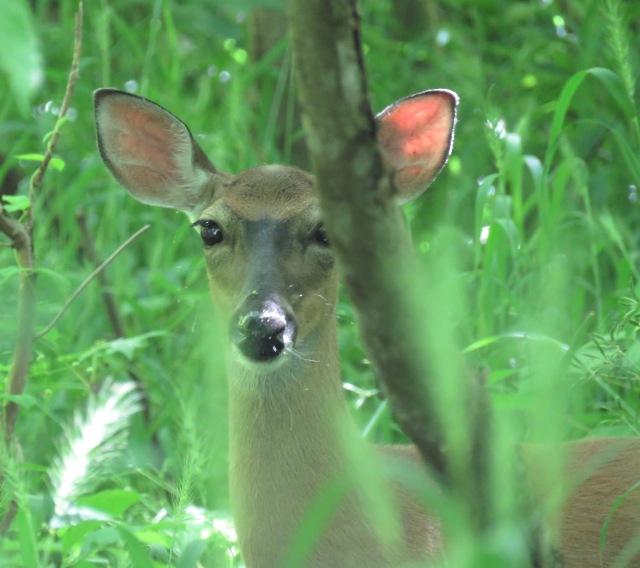 I should have backed out my zoom so you could see how invisible this deer was. There are about five total deer in the little herd. But the sun was behind her and it was shining through her beautiful big ears. And there’s just nothing pink in the woods. If you see a color in nature that doesn’t belong in nature, take a second look. Because although it’s always possible you’ll see a piece of trash, you may also get to see something really cool.

I get a lot of nice pictures in Pony Pasture. Rich Young gets even better ones. Michael Marra’s pictures are spectacular. I always get mine in the middle of the day. There are always dozens of people around. Keep your eyes open when you’re in Pony Pasture. These deer and owls watch us all the time. We just usually don’t notice them!

Evelyn has another bumper crop of nasturtiums growing around our yard. This is a color I once associated with deer hunter’s clothing, but those are actual flower petals. I did nothing to modify this picture. This is precisely the natural color – I’m not even kidding: 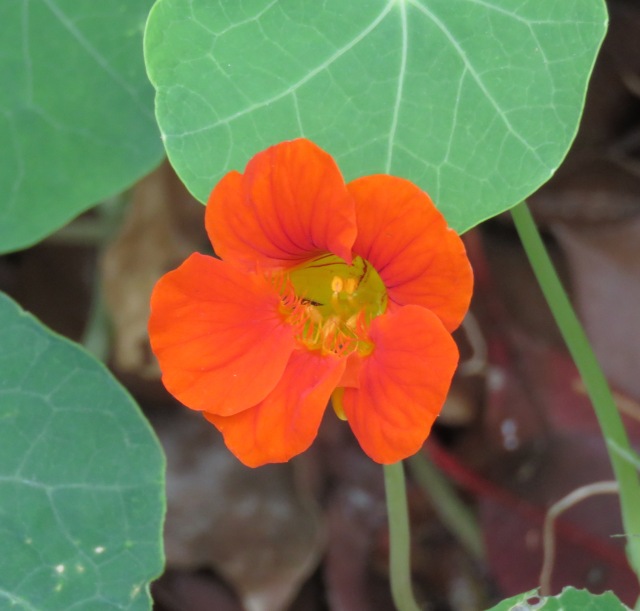 Speaking of other unexpected colors in nature (that aren’t found in male birds), Ev is growing not one but two varieties of lavender: 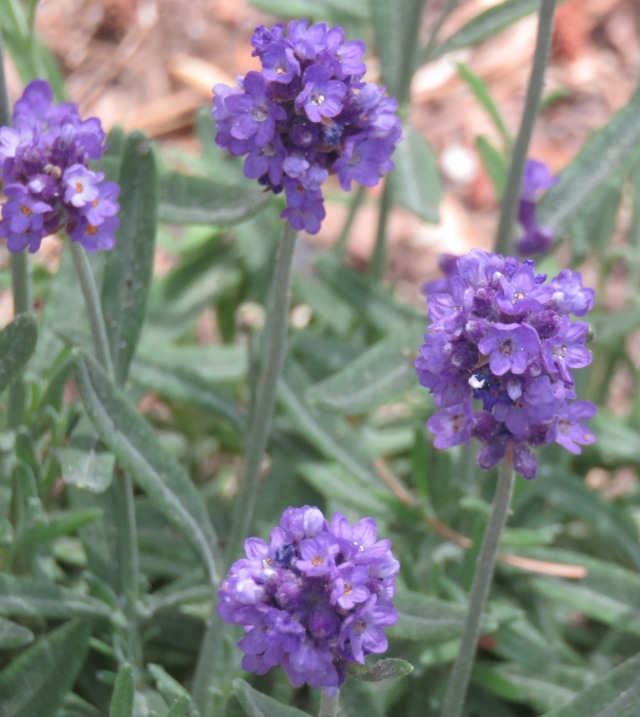 Lavender – it smells as good as it looks! 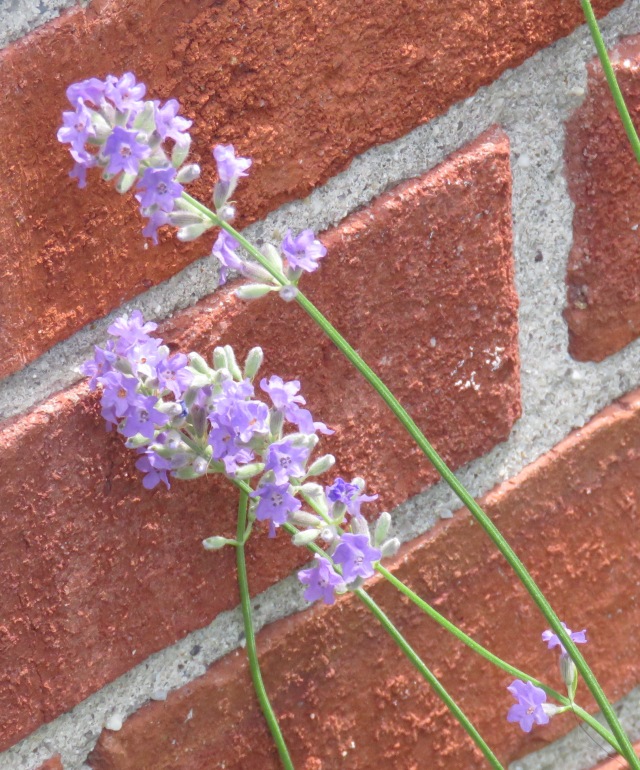 On Wednesday I saw two Red-tails. I think one of the pair near Discovery United Methodist Church flies off the nest every morning and sits on the cross to dry the dew from its feathers while it waits for an unsuspecting breakfast to wander by. But nearly every time I go past, other birds are harassing it. It’s some sort of ritual. Maybe this mockingbird is trying to reduce the Red-tail’s chance for a successful kill: 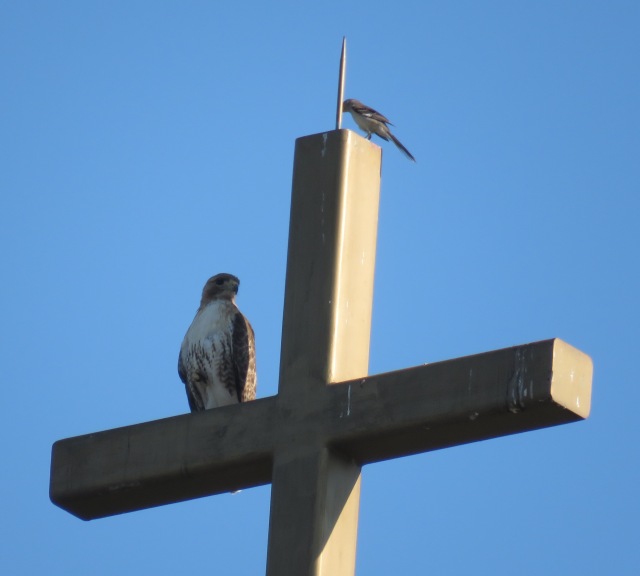 Mockingbird staying safely out of reach of a hawk

That Discovery UMC red-tail is a very predictable bird. Certain times of certain days during certain parts of the year, you can almost be assured of a picture. That’s my “morning” bird. In the evening there’s another predictable Red-tail. I took this one the same day on top of a cell phone tower at the western edge of the Westbury Pharmacy parking lot. I got a “double” here recently too; Wednesday there was only one bird: 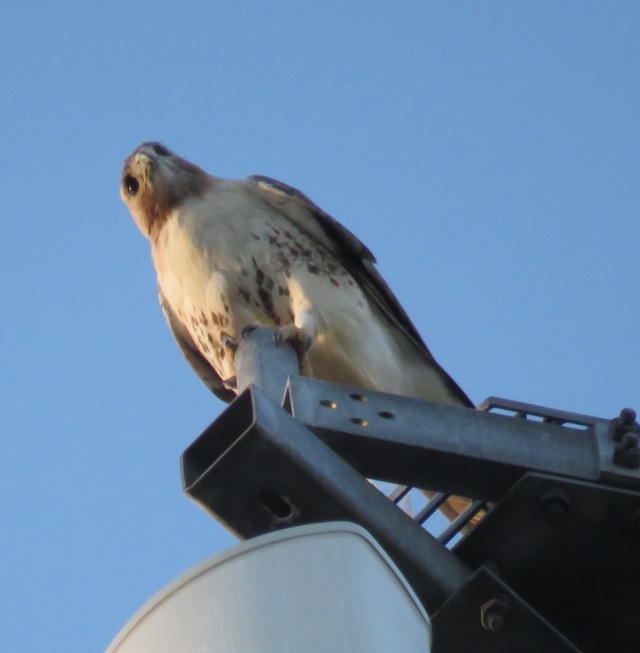 Notice the quizzical tilt to the head as it evaluates me. No bird is as aware of a camera lens as a Red-tail is. It’s an eye thing. Raptors do not miss anything.

Mackey and Turner and Yuki at Pony Pasture earlier today: 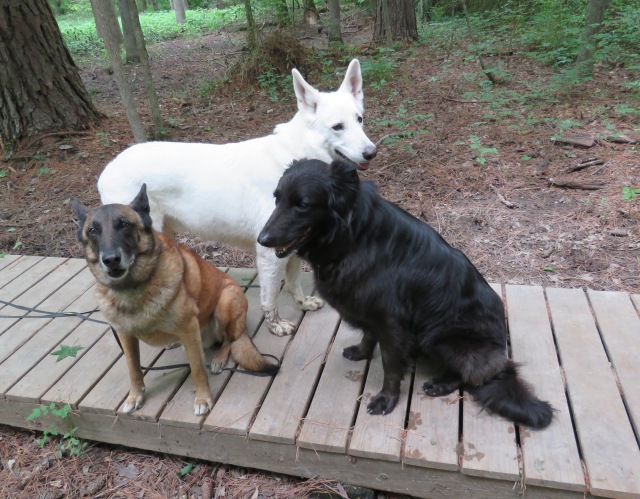 We usually hike right next to the river but Thursday we stayed on the main trail. I always forget how big those vines are until I walk past them. Look how tiny Mackey and Turner look at the bottom of the vines: 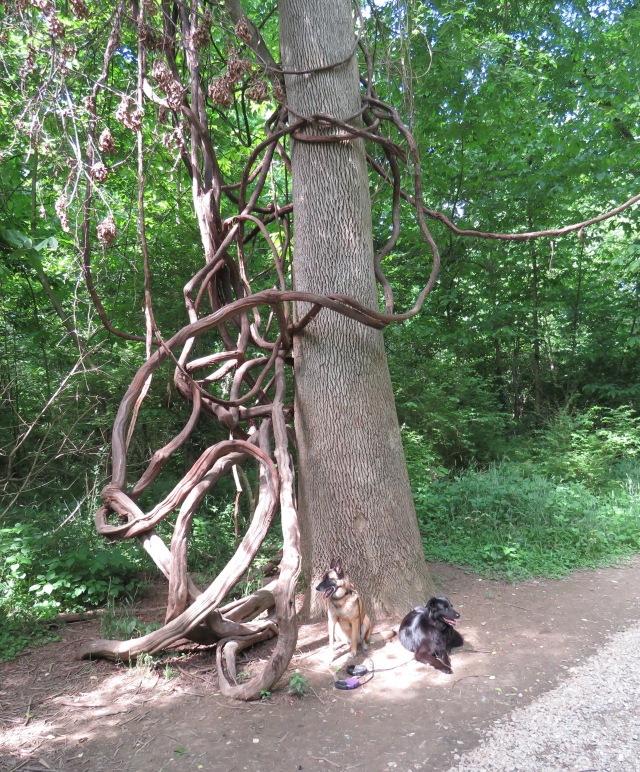 Look how those vines and that tree dwarf Mackey and Turner. And they are not small dogs.

I’ll close with a honeysuckle picture. It’s an invasive and it’s destructive but even from the time I was growing up in Maryland, honeysuckle has been one of my favorite living things. It is inarguably gorgeous and the smell is inarguably heavenly: 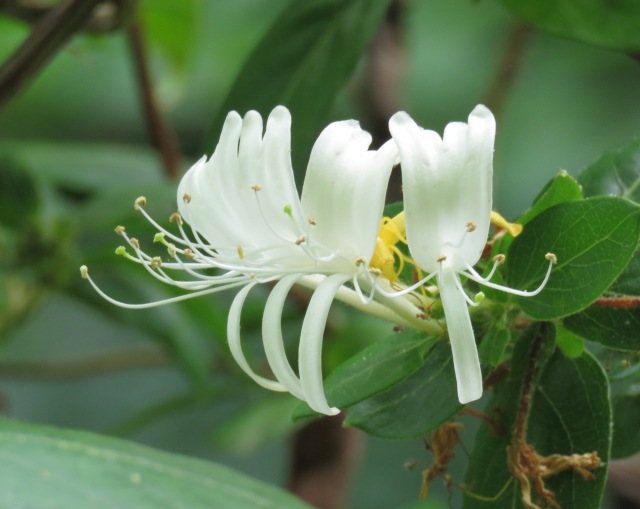 My Dad enjoyed shooting rifles, pistols and shotguns his whole life. He was my height and outweighed me by close to fifty pounds; my friends often referred to him as “Big Mike.” Dad was born in 1935 and he was on the rifle team at Washington-Lee High School in Arlington, VA. A favorite story of his described the time he put his rifle across the handlebars and rode his bicycle from his house to school for rifle team practice. He told us about the police officer who stopped him to make sure his rifle was safe. Dad showed him that the bolt was in his pocket, not in the rifle, rendering it inoperable. This, according to Dad, was sufficient to satisfy the officer, and Dad rode the rest of the way to school.

When dad died in November of 2012, part of his will was that we each got to choose from among his rifles and pistols before we sold them off. I chose an old Smith and Wesson police revolver. An indoor shooting range (Colonial Shooting Academy or CSA) had recently opened only three miles from my house. I visited and began taking the multi-day qualification course for a Virginia Resident Concealed Handgun permit. Eventually I was certified as safe to fire a handgun. I filled out an application at the Henrico County Circuit Court. They checked to make sure I am not in any legal trouble, then approved and notarized my application. I then paid the permit fee, and  I was able to ride my bicycle while carrying dad’s old revolver. And around dad’s birthday (August 17) in 2013, I remembered dad with what I called the first “Big Mike Biathlon.” Put the pistol and some ammo and targets and hearing protection in my backpack, ride my bike to the range, shoot for an hour or two, then ride home.

This is my bike where I lock it up every year when I visit: 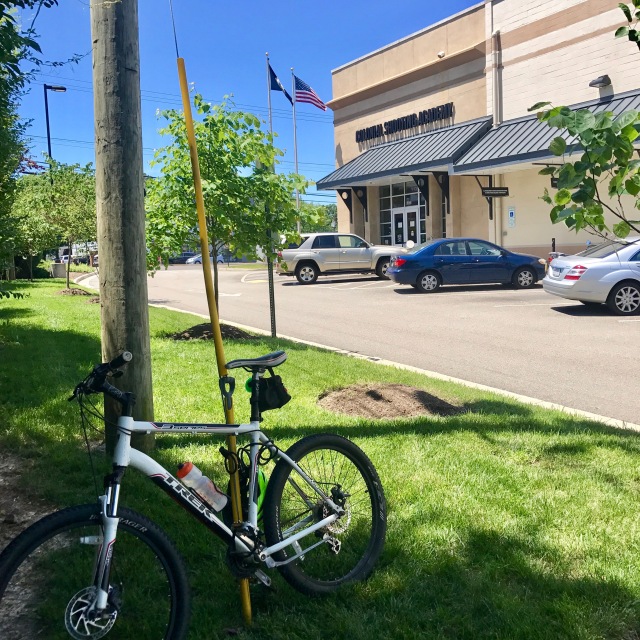 Here is a picture of my targets inside the range. When I was taking my qualification course (you had to show them you could hit a target) the instructor told all of us that store brand paper plates are the cheapest targets. That’s all I’ve used over since. Here’s what it looks like: 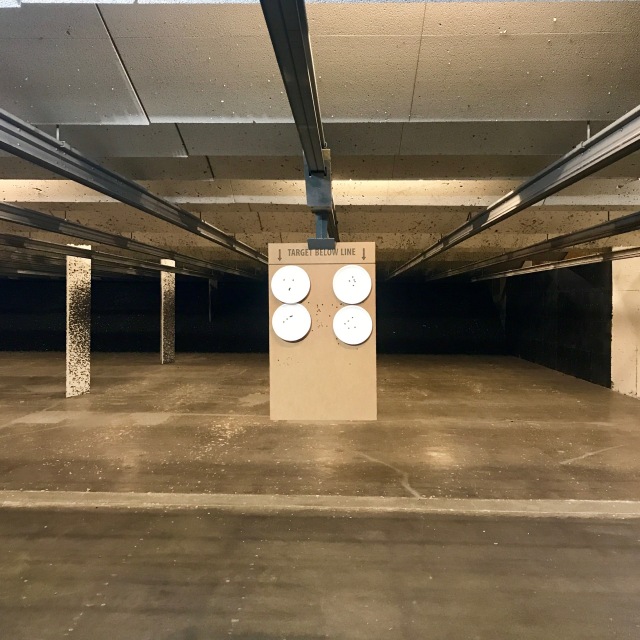 Four of my targets on the range at Colonial Shooting Academy:

Dad shot a lot – for his whole life. Even when he was out of practice, he was an excellent marksman. When I was shooting a lot I did it relatively well, but I’m not a natural. I was also mainly a rifle shooter. Pistols are more difficult because they have short barrels. When I got to the range this week I could barely hit the target. A helpful range officer watched me for a few minutes and I asked him if he would make suggestions to improve my accuracy. He just told me to put my finger lower on the trigger. Here is the result. Not impressive, but I wasn’t even on the target before: 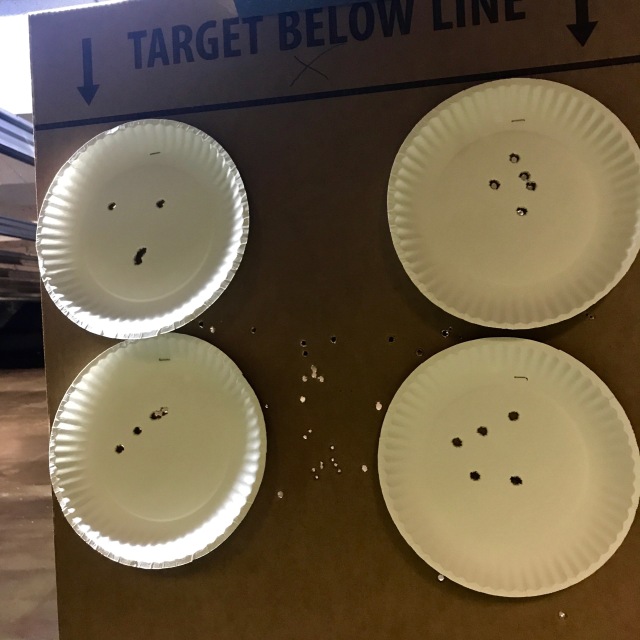 Pistols are a lot harder to aim than rifles. But it’s a great challenge:

I understand the widespread antipathy toward guns in general and toward the NRA in particular. But my dad was a proud NRA Life Member and I guarantee you would have loved my dad. You may actively dislike guns or the NRA, but if you met my dad, you liked him, end of story. Everybody liked my dad. He was just one of those people. He didn’t try to make you like him. He was just a welcoming person. Always.

Sometimes when I shoot I become deeply aware of the attraction target shooting held for my dad. He was an only child, and he was never much into team sports.  Dad loved to read. He loved to focus and concentrate and sort things out. When you’re aiming at target, especially at an indoor range, there is just nothing else. The world goes away. There is no weather, there is no work, no economy, no politics, no worry, no good health or bad health or anger or happiness, there’s not even any bliss – there’s just the target. If you are a person who thinks too hard and too often, as I do, and as I learned to do from my father, you just stop. You don’t think about the last shot or the next shot, you think about the shot you’re making. You can’t be anxious or sad or happy or worried or celebratory – you can only stay still and let the world go away. Even if you’re an anti-gun person, it’s worth going to an indoor range and trying out shooting for an hour or two. Whether you’re having your taxes audited tomorrow or leaving for a tropical vacation, it won’t matter – you’ll stop thinking about it when you’re shooting.

Next week: Son of Big Mike