Sunset from Kroger on Maui

I took this picture from the parking lot of a Kroger on Maui: 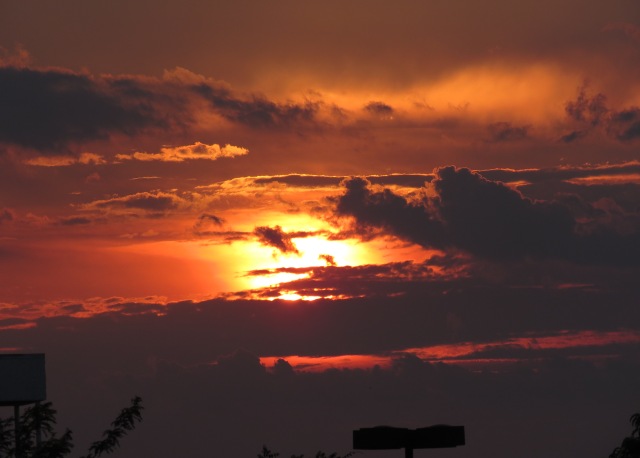 I’m kidding about Maui, of course. I took the picture in Henrico County, VA, this week!

I’m kidding about Maui, of course. I took that picture on Tuesday, June 13, from the parking lot of Kroger here in Richmond, four tenths of a mile from my house. Resting my elbow on a shopping cart filled with groceries. I always park in an uncrowded corner of the lot so I can take my time loading and unloading, and also perhaps photograph an enchanting tropical sunset. I love that I can take that photograph within ten minutes walk of my suburban Richmond home. That is a spectacular sunset anywhere on this planet.

Fair warning for ophidiophobes (people with an irrational fear of snakes), there is a picture of a snake closer to the bottom of this blog post. It’s an Eastern Ratsnake (Pantherophis alleghaniensis). No animals were harmed in the making of this blog post, but that snake had just eaten something that went straight to its hips, and it had a big bulge in its midsection. More on that later.

June 13 was the earliest sunrise of the year (here in Richmond) at 5:48 AM. The actual first day of summer – the day the sun is above the horizon for the longest time – is Wednesday, June 21. Sunrise is already beginning later by then – it’s at 5:49. But sunset is still getting later – and sets later through June 28. On June 28 we’ll have our latest sunset of the year at 8:35 PM.

I’m sure all the non-nerds (there’s probably like three) who read this blog have fallen asleep at this point. I saw other interesting (to me) sights that day, well before sunset. I could have thrown my camera and hit this deer. I should have backed away before I took this picture; she wasn’t twenty feet from the dogs. I could have photographed them all in the same shot:

Earlier on the same day I got that sunset photo. Isn’t it great to live here?

That deer was, of course, at Pony Pasture. I photographed the snake first; that was at 12:40 in the afternoon, in the creek near the golf course. We hiked back toward the wetlands. Just before we got to the eastern end of the wetlands boardwalk, I noticed a couple of Black vultures (Coragyps atratus) and a large number of Turkey vultures (Cathartes aura). The black vultures flew almost before I got my lens cap off. But there were a lot of turkey vultures, and they were more casual. One stayed around while I took this picture:

Turkey vulture on a branch

Turkey vultures don’t make noises the way many birds do. In the Cornell Guide it says “Calls — Turkey Vultures lack the vocal organs to make proper songs. Most of their vocalizations come down to a form of low, guttural hiss made when they are irritated or vying for a better spot on a carcass.” The woods were mostly silent though, but there were six or eight vultures perched on the ground and in the trees. They made a huge noise  flapping their wings as they moved around – it was much louder than human conversation would have been. I don’t know why they were in that spot, but I’ve seen them in that patch before. I never saw or smelled any dead animal. Maybe some of the birds were young.

I’ll put the snake from that day at the bottom of this post.

The next day was Wednesday, and this time of year Wednesday is my unofficially designated “Osprey day.” I can never get a good photograph, but I can generally get a reasonable photograph of at least one osprey from the parking lot of Fulton Bank off Chippenham Parkway (State Route 150). Near Stony Point. To my surprise there was a pair of Red-tails on a tower just south of the one that has the osprey nest. At first I  thought there was only one; it was on the front corner but the sun was behind it. So I took this first: 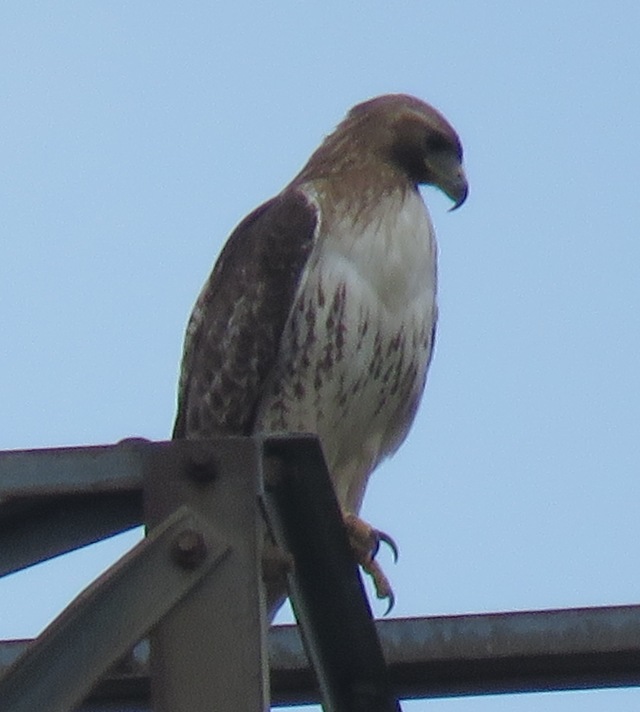 The first Red-tail I noticed at Stony Point

It took me a moment to realize there was another red-tail on the back corner of the same tower. It’s indistinct, but it’s obvious this is a pair of Red-tails: 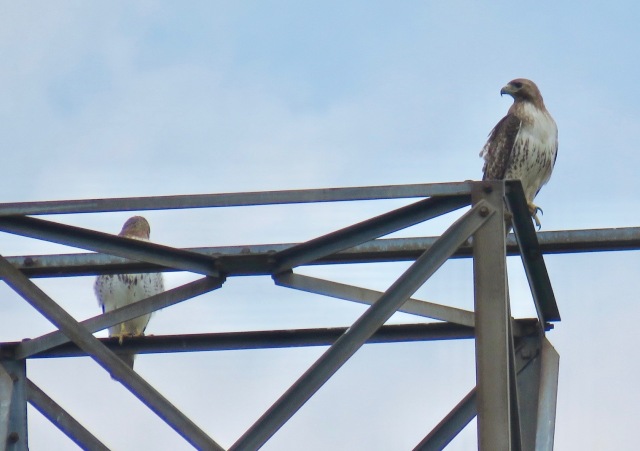 Regrettably (at least to me) I’m running late again. I’m sensing a pattern here… First I’m going to put a long-distance picture I took of a pair of ospreys from the same place. It was two towers north of the one with the nest. I wouldn’t bother with this long distance shot at all except one of the ospreys is holding an enormous fish. Then at the bottom the snake. Here’s the long distance osprey:

Look at the size of the fish that right hand bird is holding. How did it even fly up there?

Also – pre-snake picture – I had my large pack (five dogs) with me at Pony Pasture this afternoon. Here they are on the boardwalk. Snake after this; dogs first:

I was unable to determine its gender or its party affiliation.

Look at this bulge in the snake. One web site (livescience.com) had this to say about the dining habits of rat snakes: Hunting and diet –  Rat snakes are constrictors, said Savitzky [Alan Savitzky, a professor of biological sciences at Utah State University who specializes in the biology of snakes.]. They squeeze their prey to death and swallow it whole. There are some common misconceptions about how constricting works, said Heyborne [Bill Heyborne, a herpetologist and professor of biology at Southern Utah University.] One is that constrictors crush or break the bones of their prey. Another is that they suffocate it, squeezing the prey’s lungs too tightly to work. “It turns out that the squeezing overwhelms the circulatory system,” explained Heyborne. “Blood cannot get to the brain, and the animal dies within seconds due to ischemia.”

Rat snakes often feed on small rodents, such as mice, rats, chipmunks and voles, but they are also known to eat frogs, lizards, birds and bird eggs. Juveniles are more likely to eat cold-blooded prey, while adults stick almost exclusively to warm-blooded animals, according to Marshall University. Some species of rat snake are called chicken snakes because they like to eat chicken eggs.

Rat snakes are known to both wait for and ambush their prey and to actively forage for it, according to Savitzky.

According to Penn State University, sometimes after killing their prey, rat snakes continue hunting. They do this because they are cloaked in the prey’s scent so other prey is less likely to notice them. They might kill more prey and then return to the original kill. Therefore, rat snakes may eat many animals in a single meal.

So here’s the bulge. The snake’s head is to the left in this image. The bulge is about midway on the snake’s body:

See the bulge mid-snake? Probably a mouse becoming a snake.

The summer solstice here in Richmond happens at 12:24 AM EDT on Wednesday, June 21. Then the days gradually get shorter, from then through almost Christmas. That’s the official beginning of summer! So this is the final blog post for Spring – next week will be the first one of summer. Have a great week!

I am a rehabilitation counselor. I have many friends with autism and traumatic brain injuries. They help me learn new things constantly. I hike with dogs at the James River in Richmond - a lot. I've completed an Iron distance triathlon a year for 11 years. My most recent was in Wilmington, NC in November, 2013. I currently compete in mid-distance triathlons. And work and hike and take pictures and write and eat.
View all posts by Jay McLaughlin →
This entry was posted in Birds, Dogs, Flowers, Fun, James River, ospreys, People, Pony Pasture, raptors, Red-tailed hawks, Rivers, Smiles (including "dog smiles"!), Snakes, sunsets, whitetail deer and tagged clouds, Dogs, Flowers, Fun, james river, nature, Ospreys, outdoors, People, Pony Pasture, Red-tailed hawks, Rivers, smile, Smiles - human AND dog smiles!, whitetail deer. Bookmark the permalink.