Planes that take off

“…we journalists have a bias toward bad news: We cover planes that crash, not planes that take off.” – Nicholas Kristof, New York Times, 1 July, 2017 Good News, Despite What You’ve Heard

“If my crude estimate of just one store’s numbers holds true, and half of all those [cash register] receipts become instant rubbish, then based on those Huffington Post numbers, this chain of some 10,000 stores accounts for the equivalent of around 125,000 trees being thrown away every year.” – Richard Branson: Let’s make the system less wasteful

Cash register receipts are wasteful, though with the advent of e-receipts they’re daily becoming less wasteful. But that’s a “plane that crashes.” We hear so little – almost nothing – about the ones that take off. The early summer days here in Richmond are long and sunny and wonderful, and my mind is drawn to planes that take off. I’ll expand on that at the end of the post. A few pictures first. Very few – I haven’t had a great deal of success this week.

Of course from my POV it’s always a successful week when I photograph a Red-tailed Hawk, especially in a “new” spot. There is (as of this typing) a Sunoco station on the northeast corner of Gaskins Road and Patterson Avenue (9612 Patterson Avenue). It’s just west of the Bon Secours office at 9600 Patterson Avenue (I’ve photographed a Red-tail there) and just east of the Westhampton Memorial and Cremation Park (there too). This was the first one I’d ever seen on the flagpole in the Sunoco parking lot: 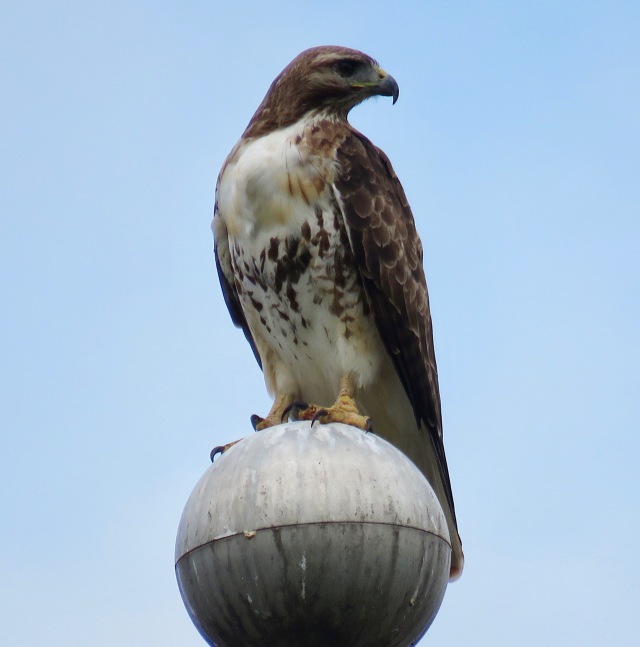 Earlier the same day I’d seen a Turkey vulture (Cathartes aura) perched on a roof much farther in the West End:

How would you characterize that expression? I find myself at a loss.

Thursday I was on my way somewhere – I don’t recall where – and a long way away I spied what appeared to be a Red-tail on a cell phone tower near the Westbury Apothecary. It was in the general direction I was headed – probably to Kroger or The Fresh Market – so I thought I’d grab a shot or two. I parked directly underneath and opened my sunroof and got, almost literally, a shot or two before it flew off. Another Red-tail was flying above and they circled together and gradually drifted north. I noticed a movement on the ground outside the window on my side and saw a small bird on the ground. It was a small, almost unused parking lot – I was the only car – and maybe there were twenty spaces. There was a huge sawed off log, I’ll bet it was two feet in diameter and four feet long. And, inexplicably, one of those blue boxes people put donated clothing into. And lying on the ground was the top of a fallen mimosa tree, covered with fronds and pink buds, and a bird flitting around inside. I started snapping pictures, just for the fun of it. There were a few soda bottles, an empty cup, candy wrappers, litter. Not a ton – just enough to make an ugly background. And the more pictures I took, the more birds were coming in. House sparrows, mockingbirds, mourning doves, robins, it was like a little bird convention. No finches or bluebirds or woodpeckers or flickers – nothing showy – but almost every bird that visits my feeders. I have no idea what the attraction was. Food and shelter, I’m guessing. More fascinating than the individual birds was the phenomenon of this nondescript, junky spot filling up with so much exuberant life.

Finally a Brown Thrasher (Toxostoma rufum) landed, a bird I’m extra-fond of. They photograph extraordinarily well, and while this image is not extraordinary, it was one of the better ones I got during that “session”:

Brown Thrasher in the most nondescript spot imaginable

Of course on a lovely day like today (Sunday, 9 July, 2017), Mackey and Turner and Yuki and I hiked at Pony Pasture. The most appealing views (in my opinion) are facing upriver near the parking lot, but even though we got there early, it was crowded. So I didn’t get over to the riverbank until we’d hiked downstream for a few minutes. The crowds thin out. The greens and blues in this picture are always pleasing. There’s an orange kayak or an inner tube or something on the left but it doesn’t spoil the image:

I just love this river

Mackey is in the dark in nearly every picture I take. This morning, somehow, the sun was shining on him. Hiking with my little posse of big boys:

Rare shot of Mackey (on left) in actual sunlight. Then Turner, then Yuki

We stopped for a quick break just before we turned south and put the river at our backs. Mackey and Yuki are enthusiastic swimmers; Turner lacks that confidence. Or insulation or floatation or ability or something. He waited for his buddies to finish:

This is: 1. Out out of order (it happened earlier in the walk and) 2. Not a brilliant image. But we got to spend a few minutes on the ground just below a busy female Pileated Woodpecker (Dryocopus pileatus ) and we hadn’t been close to one in some time. This was not long after we’d crossed the big bridge across the creek, in the woods on the way to the river. I always enjoy spending time with Pileated Woodpeckers:

Female Pileated woodpecker. She was quite busy.

I recently read that blurb (top of this post) by Richard Branson about “the system” being wasteful, or at least the system of cash register receipts. Which I can’t argue; I heard a person remark about buying a pack of gum from a convenience store and getting an 18” receipt. But earlier I’d been having a conversation with friends about photography. I’m 55 years old, and for most decades of my life, every picture anyone took meant film being developed, and printed on paper, with chemicals that believe me, you wore gloves. And all that stuff ended up down a drain or in a landfill in quantities I wince to consider. And leftover negative after leftover negative. And now when I take a picture – zero. “The system” was so wasteful twenty years ago, we wouldn’t even recognize it today. The improvement we’ve made in that system is vast, but I’ve not heard a word about it.

And music – don’t get me started. For roughly the same decades of my life that photography was trashing the environment, I was buying records. So were  billions of others who enjoyed music. Records made of vinyl. In big cardboard album covers. And eight track tapes and CD’s and cassette tapes, and trucks and planes and ships were hauling it all over the place, and all that was going into landfills and down drains and what have you. Being made in factories where people had to drive to work.

Plus everybody had a turntable, a cassette deck, a stereo receiver, an equalizer, giant wood or fake wood speakers, we had whole cabinets for this stuff. “The system” that was producing and consuming that crap was wasteful on a scale that makes cash register receipts seem like so many wisps of vapor. “The system,” again, was dumping untold amounts of pollutants into landfills and into the environment. That system has vanished without a trace.

I am not ignorant. I know our planet is warming at a rate we may be unable to reverse. I’ve had close friendships with people who died much, much too early from diseases they did nothing to deserve. Planes do crash. Sometimes I have to remind myself that most of them don’t. Remaining aware of positive trends does not mean ignoring waste. It doesn’t mean being okay with getting 18” receipts when we buy a 4” candy bar. But it’s important to recall we are surrounded by positive trends – every day.

I am a rehabilitation counselor. I have many friends with autism and traumatic brain injuries. They help me learn new things constantly. I hike with dogs at the James River in Richmond - a lot. I've completed an Iron distance triathlon a year for 11 years. My most recent was in Wilmington, NC in November, 2013. I currently compete in mid-distance triathlons. And work and hike and take pictures and write and eat.
View all posts by Jay McLaughlin →
This entry was posted in Birds, Dogs, Flowers, Fun, James River, Pileated Woodpecker, Pony Pasture, raptors, Red-tailed hawks, Rivers, Smiles (including "dog smiles"!) and tagged Dogs, Fun, james river, nature, outdoors, Pileated Woodpecker, Pony Pasture, Red-tailed hawks, Rivers, smile, Smiles - human AND dog smiles!. Bookmark the permalink.

2 Responses to Planes that take off