It’s early August, and most wildlife that was born this spring is at some stage of insatiable adolescence. They were just born a few months ago but now they’re doing their best impression of hungry teenagers. My sharp-eyed friend Sam spotted a pair – possibly three – young white-tailed deer the moment we stepped on the path at Pony Pasture Tuesday (August 1). It was so unexpected – to be able to see my parked car and a pair of fawns at the same time – that the only picture I got was sub par. But it’s still cute: 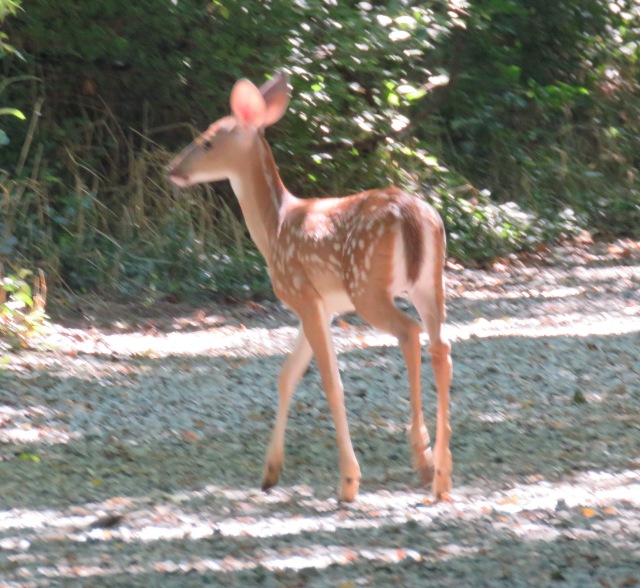 I didn’t have buck fever, but I still didn’t get a very good shot

Since I was in Pensacola last weekend, I left out some fun pictures from the week before. I’m going to use a couple today. I stopped on Wednesday that week (7/26) to see if there were any ospreys left on the nest at Fulton Bank near Stony Point. There were, and they were making a racket, but while I was getting in place for the picture, mockingbirds were making a racket right under my nose. There was a faded forsythia bush with a family of at least five – perhaps seven – mockingbirds swirling in and out. I managed to get one brief picture. I believe this is two recently fledged babies still insisting on getting food from their parents. It turns out all adolescents are similar: 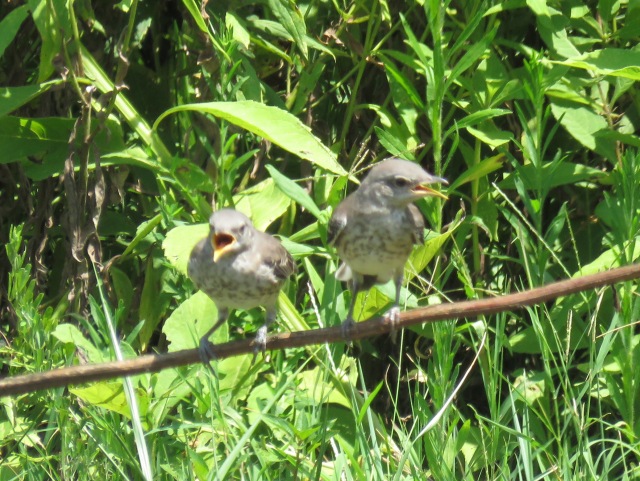 I pivoted from a quarter turn from that spot and pointed my camera up to take this picture:

Osprey parent on left and right, adolescent in middle, screaming for fresh fish

I pivoted from the spot of having lunch on my back porch Thursday (8/3) to take this picture of starving (they would have you believe) baby bluebirds trying to convince their parents that they are unable to feed themselves. Out of the overfull bird feeder they just pooped on about two seconds earlier: 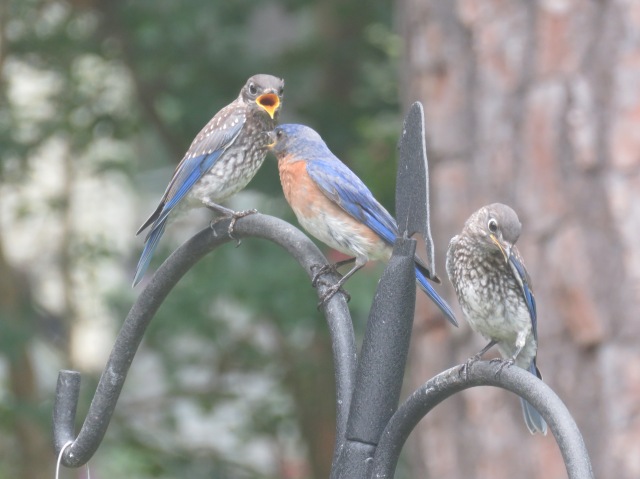 Have you ever seen so many open mouths in one blog post? I’m not even kidding.

Something eats Parsley caterpillars a.k.a. Eastern Black Swallowtail caterpillars a.k.a. Papilio polyxenes but I’m not entirely certain what. Meanwhile, the caterpillars are the ones doing the eating (acting in a teen-aged fashion) and this is what they looked like on our still leafy parsley last Thursday (7/27): 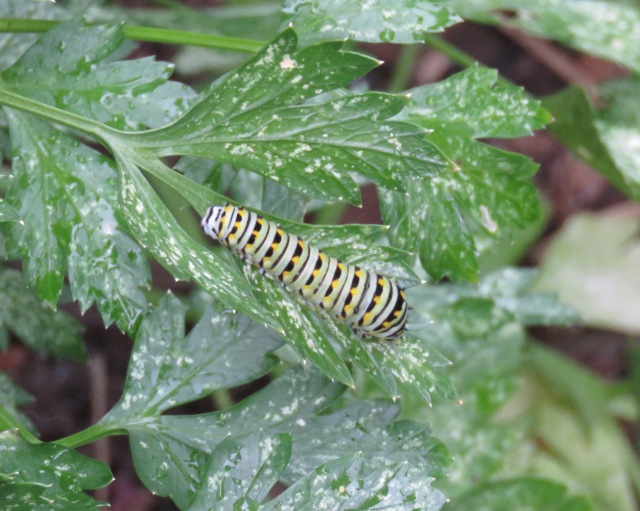 Black swallowtail caterpillar – just prior to gorging itself on parsley

I don’t know if this is the same caterpillar, but it’s the same plant, six days later, on Wednesday, 8/2. Look what happens when they “eat their greens.” It does wonders for their complexion: 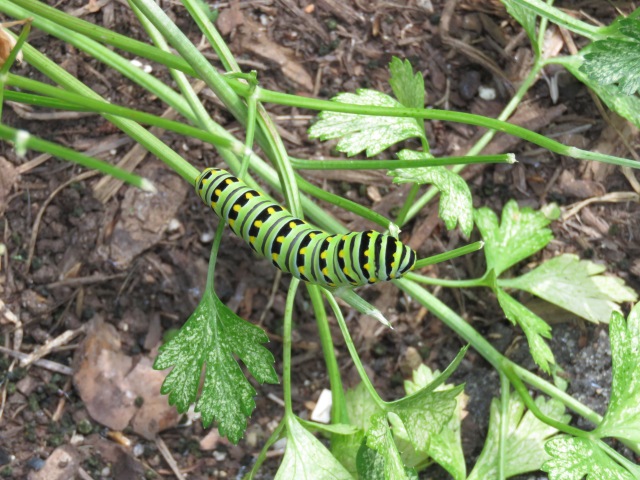 If you eat too much parsley, you’ll turn green

In mid-summer (now) at Pony Pasture, if you’re lucky and hike in the right spots (this was near The Wetlands) you’ll spot glowing red Cardinal Flowers (Lobelia cardinalis). There were around a dozen in a little swampy area and I was peering around with my camera looking for the most photogenic specimen. As my lens came to rest on this one (it was around twenty feet away) I noticed movement near the flower. It was a Ruby-throated Hummingbird (Archilochus colubris )! The first one I’ve ever seen at Pony Pasture! 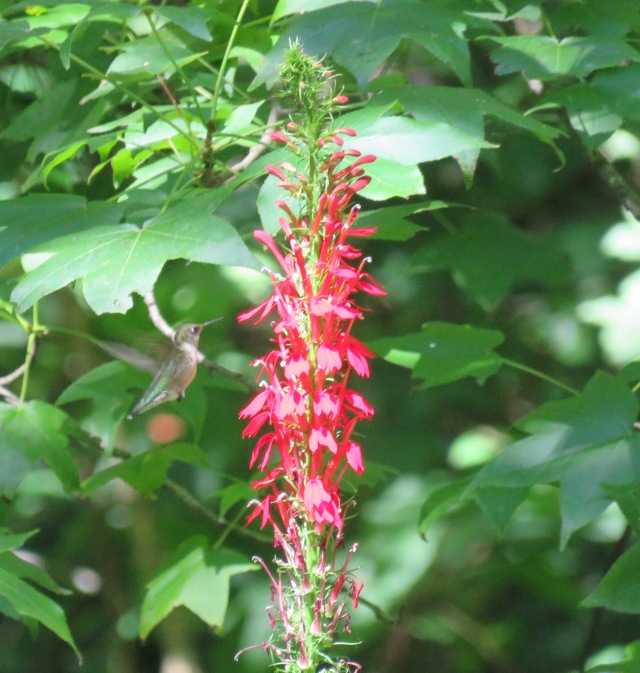 Hummingbird just to left of center in the picture – see it there? So pretty.

Monday (7/31) (this image is a bit more pedestrian) there was a pair of Red-tails on my “local” powerline – I can walk one house down from my driveway and look right at it. The moon was up and although I couldn’t get the precise image I would have liked, this one came out okay. It called to mind a 1988 song by U2 called Hawkmoon 269: 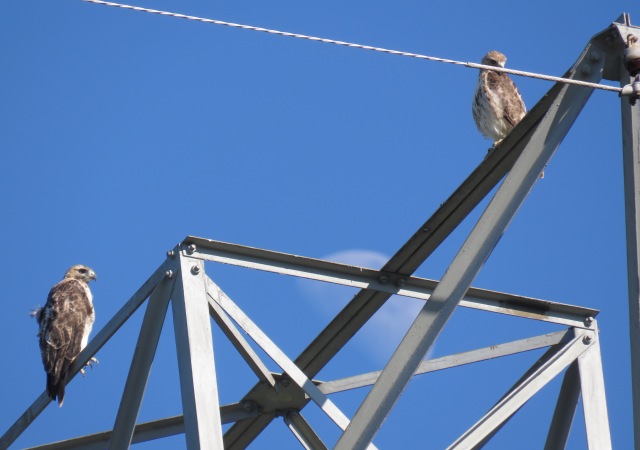 A pair of Red-tailed hawks on the powerline across the street, moon rising behind them

Today at the river – this simply never happens – I had all three dogs standing in a row in the sun – and Mackey was closest! I don’t like it when I get my shadow in a picture but oops: 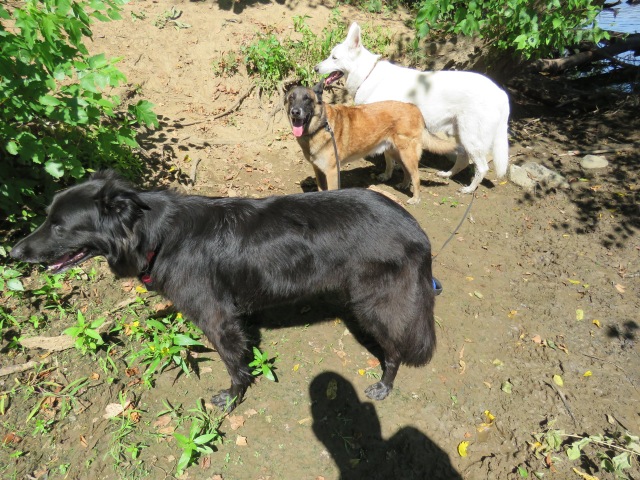 Mackey (black) in front in the sun, Turner (brown) behind him, Yuki (white) behind Turner

We’re looking forward to more rain here in Richmond this week, beginning tonight or tomorrow. Thanks to the relatively pleasant weather and Evelyn’s skill as a gardener, this gardenia burst into fragrant bloom on our back patio this morning before we sat down to breakfast: 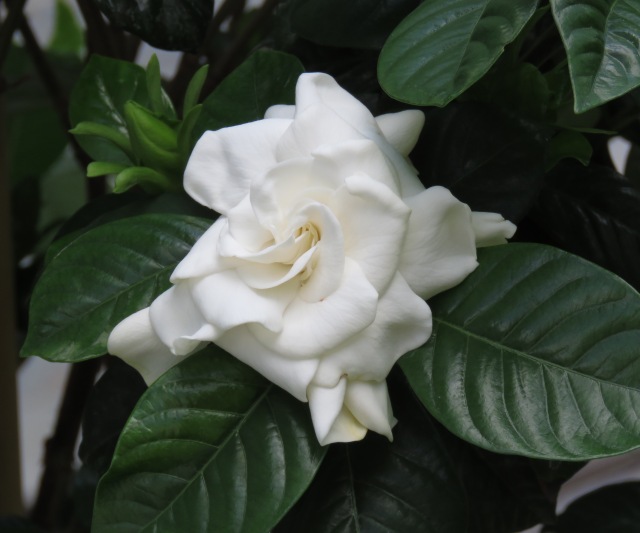 Smells so great I almost can’t taste my oatmeal

Maybe next week I’ll be more organized – but possibly not. Either way, have a great week! All best,

I am a rehabilitation counselor. I have many friends with autism and traumatic brain injuries. They help me learn new things constantly. I hike with dogs at the James River in Richmond - a lot. I've completed an Iron distance triathlon a year for 11 years. My most recent was in Wilmington, NC in November, 2013. I currently compete in mid-distance triathlons. And work and hike and take pictures and write and eat.
View all posts by Jay McLaughlin →
This entry was posted in Birds, Dogs, Endurance, Flowers, Fun, Gardenias, mockingbirds, ospreys, Pony Pasture, raptors, Red-tailed hawks, Rivers, Smiles (including "dog smiles"!), whitetail deer and tagged bluebird, Dogs, Endurance, Flowers, Fun, Gardenias, james river, nature, Northern mockingbird, Ospreys, outdoors, People, pictures of the moon, Pony Pasture, Red-tailed hawks, Rivers, Smiles - human AND dog smiles!, whitetail deer. Bookmark the permalink.