Andrew and me, post race this morning in Manteo

I couldn’t get that thought out of my head this morning in Manteo, NC. It’s a license plate I saw, many years ago. Sound it out – you’ll understand the sentiment. That’s a picture of me with my friend and fellow triathlete Andrew, who has competed with me in multisport races for close to thirty years. Another athlete snapped that picture just after we finished the Outer Banks Triathlon around 10:00 AM today. We did one yesterday too. Here’s the sunrise just before yesterday’s race:

I mean, seriously. We got to swim and bike and run around Manteo and the Outer Banks of North Carolina for a few hours each on two days. We saw beautiful scenery, we met positive, upbeat, cheerful people, and we had others yelling encouraging words at us the entire time. So which part was the hard work? No part, that’s which part. A person in Andrew’s family owns a cottage in Kill Devil Hills, NC, and that’s where we stayed. Here’s my car parked outside: 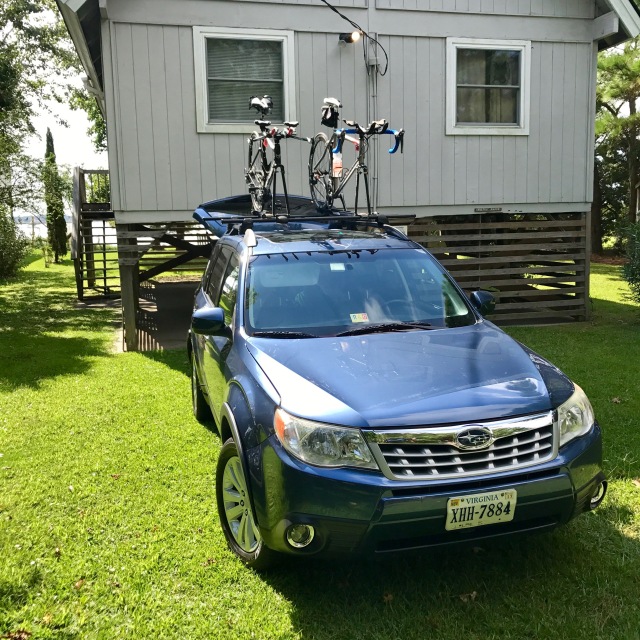 House where we stayed between races. With a dock on the sound. YW84JOY

So, seriously, again – hard work? No way. We ate a lot (we burned up a lot) and even that was fun. Yesterday evening – after the Olympic distance race – we had dinner at the Black Pelican Restaurant in Kill Devil Hills. This was the view from the front of the restaurant:

Just after that race – before we even went home – we refueled with cheeseburgers and chocolate milkshakes from the Olde Towne Creamery in Manteo. If you’re vegan they have sorbet and probably other stuff. If you’re vegetarian, they have milkshakes which are OMG. You can not even believe how delicious. I chose the third option, which includes giving thanks to the spirit of the cow who gave its life so I could eat what their menu describes as a “CHEESEBURGER – A true American classic chuck steak burger.” No one would ever mistake me for a connoisseur of any type of food, but I know a good burger when I eat one and this is off-the-charts good. The place is tiny and service is beyond compare. If you’re ever in the Outer Banks, go there. It’s a treasure.

We were just getting back from the second race today when I did an arm selfie (you don’t see tons of arm selfies) of my race number with additional smiley face just before I washed it off:

It’s important to wear a smiley face while swimming, biking and running

I’m closing up on a moment – I’m running on fumes. But I can’t let a week go by without a raptor, especially an “accipiter.” Red-tailed and Red-shouldered hawks – this blog is littered with their pictures – are “buteos.” I see one or more buteos almost literally 365 days a year. I’m lucky if I see an accipiter ten days a year. It’s possible this is a female Sharp-shinned hawk (they’re noticeably larger than males) but better informed people than me believe it’s a male Cooper’s hawk. An opening sentence on the Cornell Lab of Ornithology web site says that “Separating Sharp-shinned Hawks from Cooper’s Hawks is one of the classic birding challenges.” So I’m not swearing by my ID. Believe it or not I took this picture Wednesday evening in West Broad Village almost within sight of Burger Bach just after Evelyn and I finished dinner. Their burgers are the best in central Virginia by a considerable margin. But check out this hawk:

I also can’t let a late summer week go by without a picture of the nasturtiums Ev still has proliferating in our front yard; she brought these in a couple of days ago: 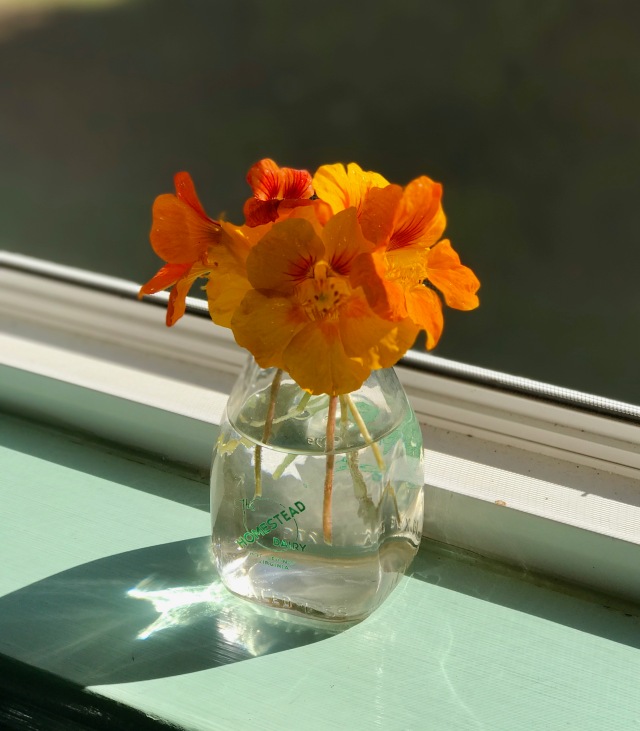 Evelyn both surrounds and fills our home with beauty

And I got home too late this evening to get a good gardenia picture, but next week. Ev sent this picture yesterday. When I got home tonight there were four huge blooms on the plant – the most it’s ever had, I believe: 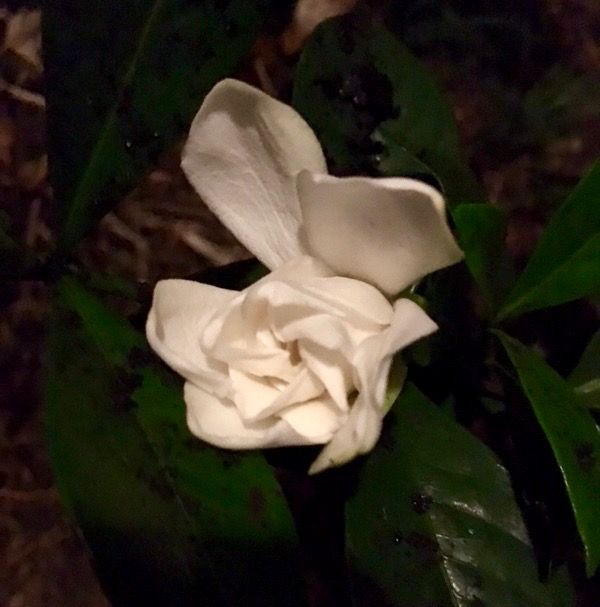 Gardenia picture Ev sent while I was at the beach. But I couldn’t smell it! Now I can.

I had my third flying lesson Thursday. I took this picture of the plane just before we started it up:

Plane I flew for my third flying lesson

One more race picture. Andrew took this about ten seconds before I crossed the finish line for yesterday’s race:

There is not a single minute during a triathlon when I am not happy. You should try a short one – you will not regret it for one second.

I’ll close with a picture from Friday evening in Manteo, just as we were picking up our race information:

Sun heading for the horizon Friday evening in Manteo. 13 hours before race start:

I am a rehabilitation counselor. I have many friends with autism and traumatic brain injuries. They help me learn new things constantly. I hike with dogs at the James River in Richmond - a lot. I've completed an Iron distance triathlon a year for 11 years. My most recent was in Wilmington, NC in November, 2013. I currently compete in mid-distance triathlons. And work and hike and take pictures and write and eat.
View all posts by Jay McLaughlin →
This entry was posted in Birds, Cooper's Hawk, Endurance, Flowers, Fun, Gardenias, outer banks, People, raptors, Rivers, Smiles (including "dog smiles"!), sunsets, triathlons and tagged clouds, Endurance, Fun, Gardenias, nature, outdoors, People, smile, Smiles - human AND dog smiles!. Bookmark the permalink.