Footballs in the trees

Posted on December 3, 2017 by Jay McLaughlin 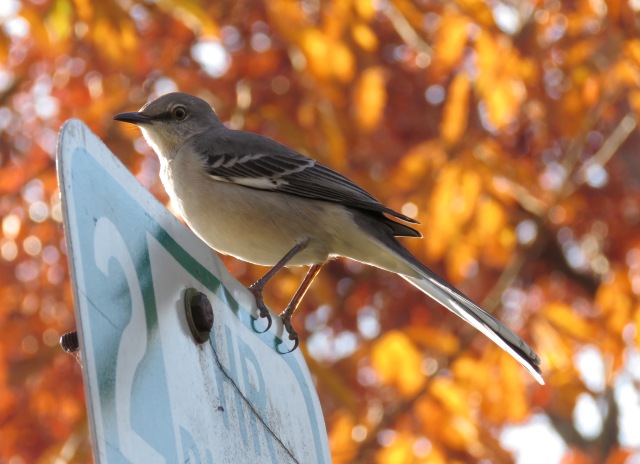 Mockingbird on a sign – my favorite picture in a while. It was an accident!

This first (mockingbird) image is unrelated to the title or the rest of the post; I just enjoy the way it looks. I stumbled on it by accident earlier this week when I was driving to the river.

The title relates to this:

If you’re uninterested in raptors, the “football in a tree” concept is uninteresting. But from now through late February, when the tree branches are bare, if you want to find big birds in the woods, look for footballs in trees. That’s what Bald eagles look like, Red-tailed and Red-shouldered hawks, and Barred owls too. The first thing you’ll notice is the size and shape. They all look like footballs in trees. There’s nothing else like them.

Here’s a “football” – but it’s not in a tree. It’s a Red-tailed hawk on the lights at the baseball field at Freeman High School in Henrico County.

Buffleheads, as you’ve seen, at least as you’ve seen on this blog, are difficult to photograph. Or anyway they are for me. Another thing you may have noticed is my shaky videography. I was hiking with a buddy of mine at Pony Pasture on Monday and suggested he try a few bufflehead pictures. He promptly lay down on a rock – solving the shaky camera problem – and took this excellent video. It has about twenty (or more) buffleheads, floating up and down, flapping their wings, chasing one another, and possibly even frolicking. It was 60º, sunny and still, it’s difficult to imagine they didn’t enjoy themselves. Watch it and see what you think:

This is Pony Pasture this morning:

Bald eagles and I each draw sustenance from the river. Buffleheads do too.

I saw an actual turtle in at the river this morning. It’s December! I liked its reflection on the water: 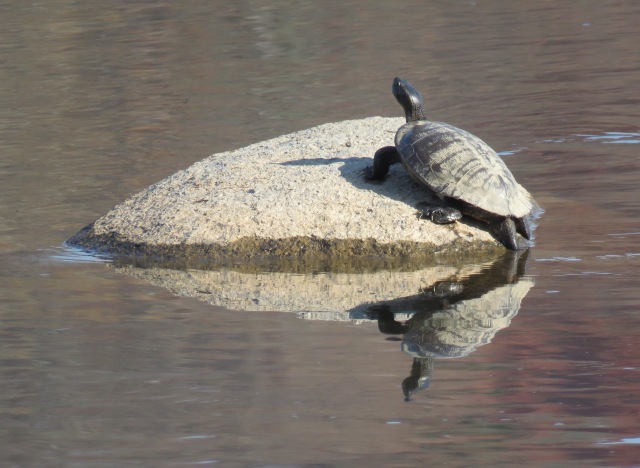 Turtle in the river in December! It looks mighty comfy though.

This is also Pony Pasture today, an hour later:

Evelyn was out of town this weekend; she left really early Friday morning. When I came out later to eat breakfast I found this card on the dining room table: 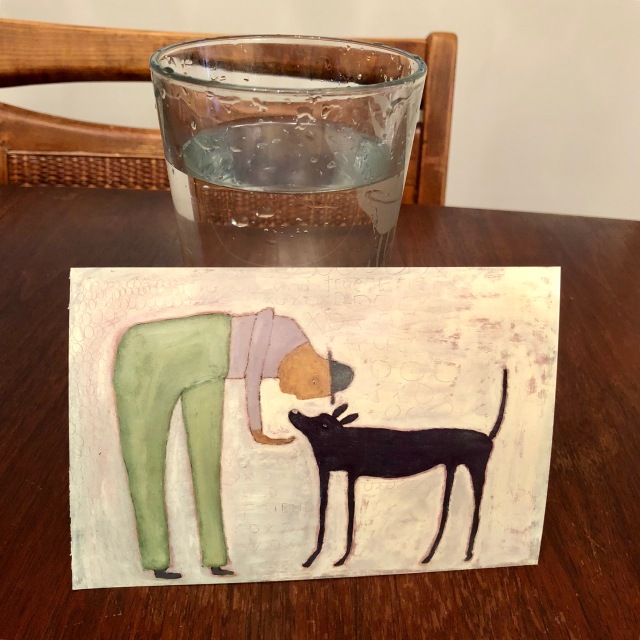 I don’t know where she finds this stuff. Isn’t it excellent?

All four of us are looking forward to her return – soon we hope! Dash will wait in his favorite spot. His face will not be lined with worry:

All is always right in Dash’s world. Especially in the winter when there’s a fire in the woodstove.

As long as he’s home and there’s a fire and he has a Kong toy, Turner knows where he’ll wait too:

Have a great week! And come back next week! I’m planning a new blog section in 2018.  The first planned blog post of 2018 is Sunday, 7 January. I’m getting in touch with my inner nerd (more in touch than I already am, if you can imagine such a thing) and appending a brief section to the end of each blog post. I’ll describe it at the end of this blog post. All best,

Genesis of “the tally”

genesis – “The coming into being of something; the origin. See Synonyms at ‘beginning.’” – American Heritage Dictionary of the English Language 5th Edition

This project will focus my attention, literally and figuratively.

I will record every notable wildlife sighting each week in 2018 at the bottom of each blog post. Red-tailed hawks, red-shouldered hawks, bald eagles, whitetail deer, ospreys, barred owls, buffleheads, snakes, turtles, frogs, bluebirds, if I’ve photographed it – I have to have an identifiable photograph – I’ll record it here. I’ll learn how often I see certain animals, and the time of arrival and departure of some seasonal visitors. Everything will be in central Virginia. Maybe a couple in the mountains of Virginia. Mainly in Pony Pasture, except for hawks. I see hawks all over town, nearly every day, or so it seems at the moment. But not often at Pony Pasture.

I’m going to learn how the animals move with the rhythm of the seasons. There are buffleheads on the James now, but they’ll go away in March or April. And won’t return until November. There are no ospreys now, at least not on Parham Road where I normally see them, but they’ll return in March – possibly February – at roughly the time the buffleheads leave.

I won’t tally a lot of songbirds. They’re beautiful and they have lovely voices but I enjoy them most in the background. Chickadees are my favorite, plus I love bluebirds and goldfinches and most woodpeckers. But songbirds won’t be tallied regularly. I also don’t anticipate doing much with mallards, Canada geese, seagulls, that sort of thing. By this time next year I will have a more precise idea of what comes and goes, and how often, and when.

I’m not a scientist but I enjoy the collection and organization of data. It helps me make sense out of things. When I’m outdoors, the absence of politics, of religion, of advertising – every moment is a relief. There is no partisanship about the first frost. No prayer causes an osprey to plunge into the river after a shad. No advertisement beckons a pair of Barred owls to build a nest in a hollow sycamore. It’s so quiet. Always a sanctuary.

I am a rehabilitation counselor. I have many friends with autism and traumatic brain injuries. They help me learn new things constantly. I hike with dogs at the James River in Richmond - a lot. I've completed an Iron distance triathlon a year for 11 years. My most recent was in Wilmington, NC in November, 2013. I currently compete in mid-distance triathlons. And work and hike and take pictures and write and eat.
View all posts by Jay McLaughlin →
This entry was posted in Bald eagles, Birds, buffleheads, cats, Dogs, firewood, Fun, James River, mockingbirds, Pony Pasture, raptors, Red-tailed hawks, Rivers, Smiles (including "dog smiles"!), Turtles and tagged buffleheads, Dogs, Fun, james river, nature, Northern mockingbird, outdoors, Pony Pasture, Red-tailed hawks, Rivers, Smiles - human AND dog smiles!. Bookmark the permalink.

6 Responses to Footballs in the trees