The opposite of complaining

Evelyn and I got up at 5:00 Friday morning, her for an early train and me for work. The windows were open and I was standing at the stove stirring oatmeal, listening to the neighborhood birds singing together, louder and more beautiful as dawn lightened the sky behind the trees. It is a magnificent, magnificent symphony – nothing man-made comes close. Birders call it “the dawn chorus.” I call it breathtaking and beautiful. So I’m stirring and thinking of Paul Simon and “I’m not complaining – just the opposite my friend” – and Evelyn walked into the kitchen. I said “What is the opposite of complaining?”

The swift, certain tone of her reply suggested she’d been waiting for me to ask that precise question. “That,” she said, gesturing to the exuberant riot of predawn birdsong swelling in our yard and in our neighborhood and filling our kitchen. I could only smile. I’d been pondering “the opposite of complaining” since I first heard that song two years ago. Evelyn and our yard full of birds answered my question in an instant.

This cardinal wasn’t from my yard – this was from Pony Pasture at 11:30 this morning – but there are many like this (and females) on my feeders every day. And I guarantee this guy provides a strong thread of the sound tapestry that is “the opposite of complaining”:

The most exciting news of all – more exciting even than the opposite of complaining – is I have a brand new niece! Teagan Ann was born early Friday afternoon in Blacksburg and she’s healthy and gorgeous and I’m told is calm and easygoing. She certainly looks healthy and peaceful and she actually looks kind. She’s not even 72 hours old as I type these words but she has a benign, accepting gaze that is already making the world – my world, anyway – a better place. I haven’t seen pictures of her when she’s hungry or needs a diaper change, but the pictures I’ve seen of her so far could go in the dictionary as “the opposite of complaining.”

Another bird from the river this morning that has a lovely song but is not in my yard – or at least I’ve never seen one. This is a Hermit Thrush (Catharus guttatus):

This bird was probably part of the Dawn Chorus. This is a fraction of what “the opposite of complaining” looks like:

When I say this “guy,” I’m putting photographs of males. The Dawn Chorus is close to 100% males. It’s advertising mating and nesting and food and availability and territory – when you hear all those birds singing on a Spring morning, you’re hearing males.

Our front dogwood is about a fifteen foot flight from our bird feeders. I’m sure they perch out here while they serenade us in the morning: 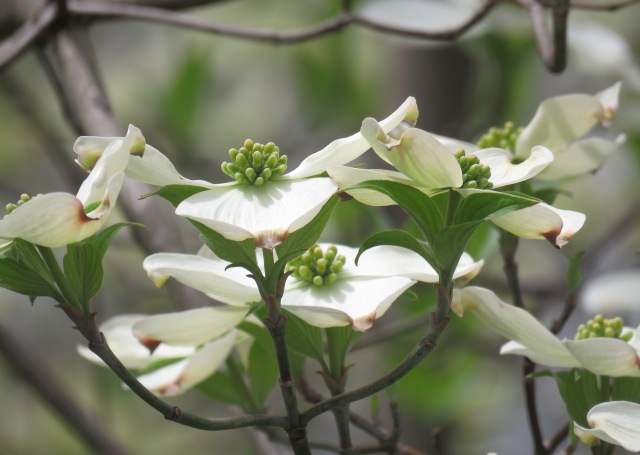 Dogwood in our front yard, and staging area for feeder-bound birds

Evelyn has almost as many varieties of daffodils in our yard as we do songbirds. Look at these little white beauties:

Who knew daffodils could be this spectacular?

There were conventional purple lilacs in this yard when I moved here, but they’ve struggled. Perhaps these white lilacs have taken all the good energy; they get bigger (and smell better) with each passing year: 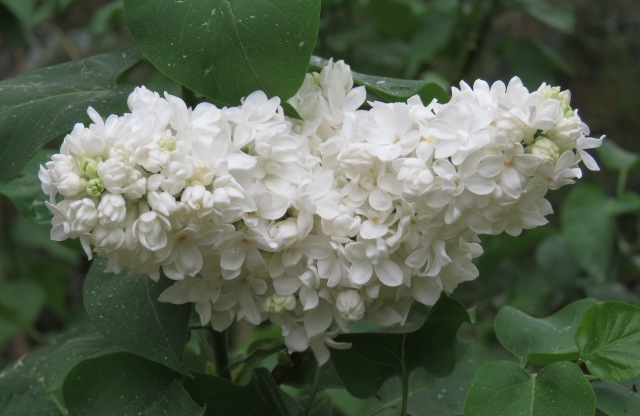 Can a flower be the opposite of complaining? If so, it looks and smells like this

I also went flying Tuesday! Only for a little over an hour, but it was a great flight – I’m glad to be back in the sky. The opposite of complaining! I’m learning in a Cessna 172, the most-produced airplane in history, and I love every minute of it. Just before I began my preflight on Tuesday afternoon: 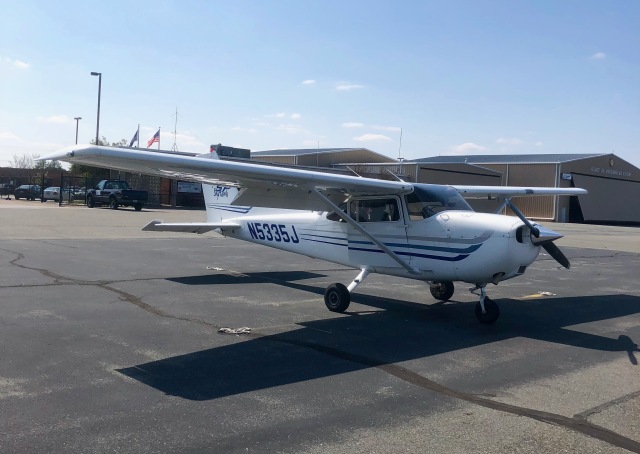 Just before my one hour flight Tuesday afternoon. It was spectacular.

Can’t let a week go by without a picture of one of Pony Pasture’s graceful deer. This was Thursday morning at 11:30:

I don’t think deer are able to look clumsy. They only ever look like this.

Can’t leave out my only raptor for this week – another osprey. I am astounded how few Red-tails and Red-shoulders I’m seeing. Osprey from Tuesday afternoon: 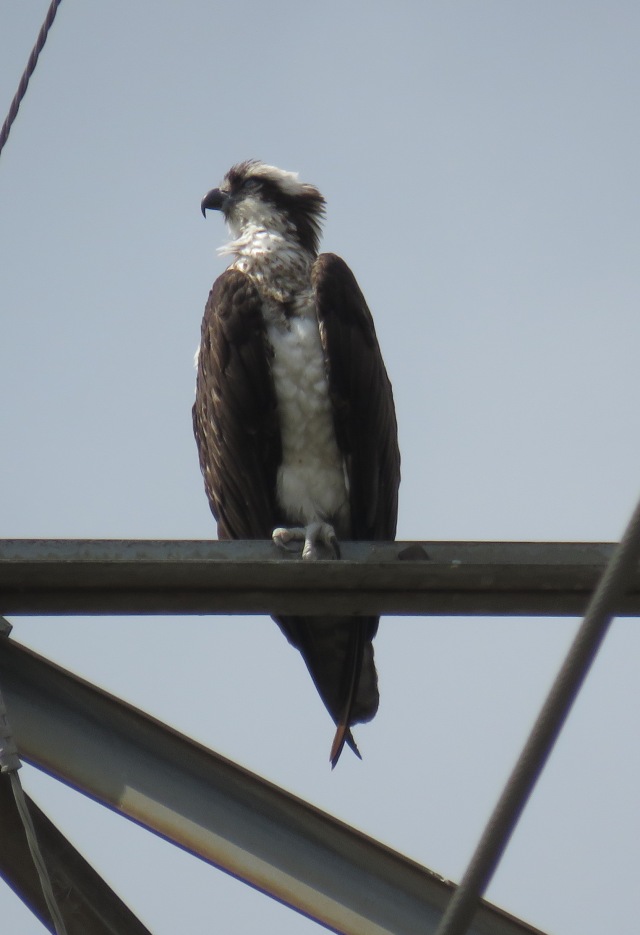 I got a “new” (to me) flower at the river this morning. I’d seen it before but misidentified it. Through the magic of the internet I emailed the picture to Ev and she’d identified it before I even got home. This is a Summer Snowflake (Leucojum aestivum):

I also got a decent picture of a mockingbird when I was at Hollywood Cemetery this week. I hope it’s not irreverent to note that the granite tombstones blend well with the mockingbird’s muted colors. Their song is anything but muted; I’m sure they’re a huge contributor to the opposite of complaining: 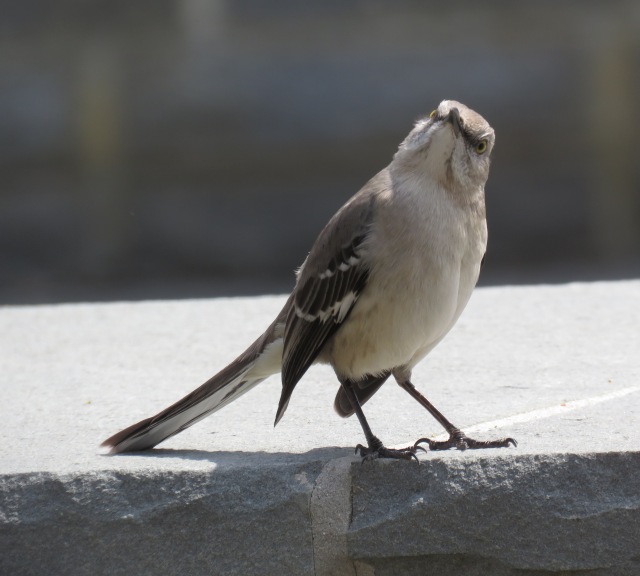 They sing – they don’t complain. But I don’t know why they tilt their heads.

I watched that bird for several minutes and it cocked its head like that a number of times. I’ve never seen that before and I’m not sure what was going on. Raptors “snake” their heads from side to side to help gauge distance. But I don’t know why this passerine was doing it. Maybe the same reason.

PS Almost left out my Black Snake picture – here it is, sticking its head out of a tree:

[[This just in, as of Sunday evening, Monday morning, from my herpetologist friend Kim and from another person on Facebook named King Sandy – they both say it’s an Eastern Ratsnake (Pantherophis alleghaniensis)]]

Black snake getting above it all at Pony Pasture Saturday morning

I am a rehabilitation counselor. I have many friends with autism and traumatic brain injuries. They help me learn new things constantly. I hike with dogs at the James River in Richmond - a lot. I've completed an Iron distance triathlon a year for 11 years. My most recent was in Wilmington, NC in November, 2013. I currently compete in mid-distance triathlons. And work and hike and take pictures and write and eat.
View all posts by Jay McLaughlin →
This entry was posted in Birds, cardinals, Cessna 172, daffodils, Flowers, Fun, James River, mockingbirds, ospreys, Pony Pasture, raptors, Rivers, Smiles (including "dog smiles"!), Snakes, whitetail deer. Bookmark the permalink.

2 Responses to The opposite of complaining