Too wet to fly – but there were snakes!

Advance warning to those who don’t care for snakes – there will be a few pictures near the bottom of this post.

I think of “cheerful” when I think of bluebirds. “Bluebird of happiness” and so forth, you know what I mean. I was supposed to go flying Tuesday but it was cancelled due to rain. I photographed this bluebird Tuesday. The perfect expression of “too wet to fly” – but for birds it’s not optional:

I’m not kidding – I never knew a bluebird could scowl. Until I took this picture.

I was also scheduled to fly Thursday when it was not too wet to fly. This was shortly before takeoff: 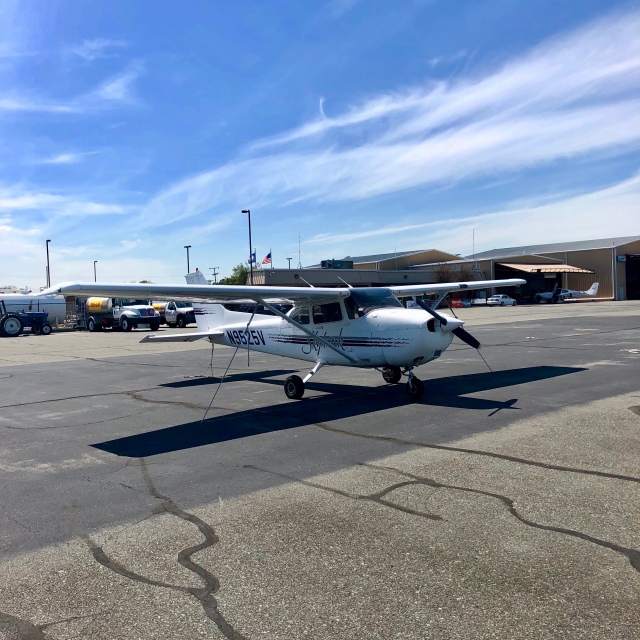 My Cessna awaits, on a much nicer day for flying

When I “pre-flight” the plane I have an extensive checklist of items to check outside the plane. Fuel, ailerons, rudders, tires, antennas, brakes, tie down ropes, and many more. Once I finish outside, there is an equally long checklist for items inside the plane. Fuel gauges, compasses, seat belts, fire extinguisher, radios, flight controls, etc. I snapped this picture from the pilot’s seat. Lots of pollen that day: 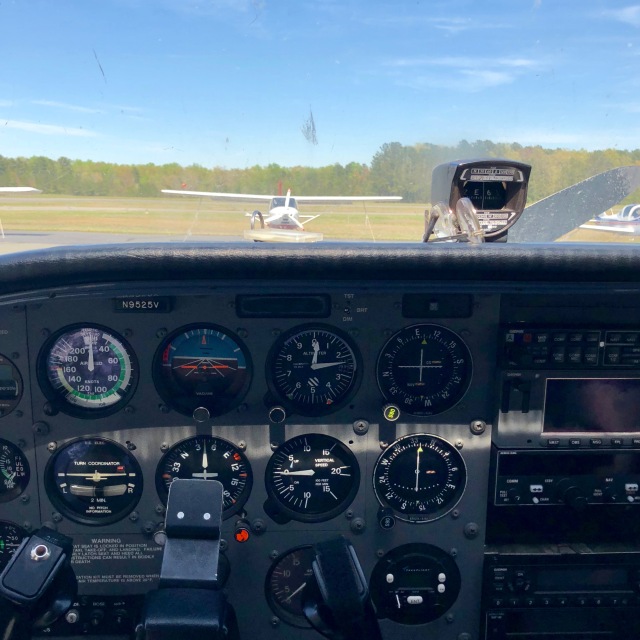 This is the view from the driver’s seat – note stopped propeller, and LOTS of pollen:

The weather looks good for this week and I’m looking forward to flying more.

I’m embarrassed that the only bird of prey I got this week was this partially obscured osprey. When I arrived it was hovering above the Z-Dam that connects the south bank and Williams Island. It landed in a sycamore when I snapped this. I was pulled over on the side of the road with my flashers on so I couldn’t get a better shot:

That was the same day Sam and I got some great pictures of an Eastern Ratsnake (Pantherophis alleghaniensis) at Pony Pasture. So I can’t complain. I’ll put that picture down lower. Meanwhile – I’ve been getting a mockingbird (Mimus polyglottos) on my suet feeder! Mockingbirds are not (in my experience) typically “feeder birds” and I believe this one was having a bit of trouble keeping its balance. You’ll never see a chickadee or a sparrow or a finch flail around like this: 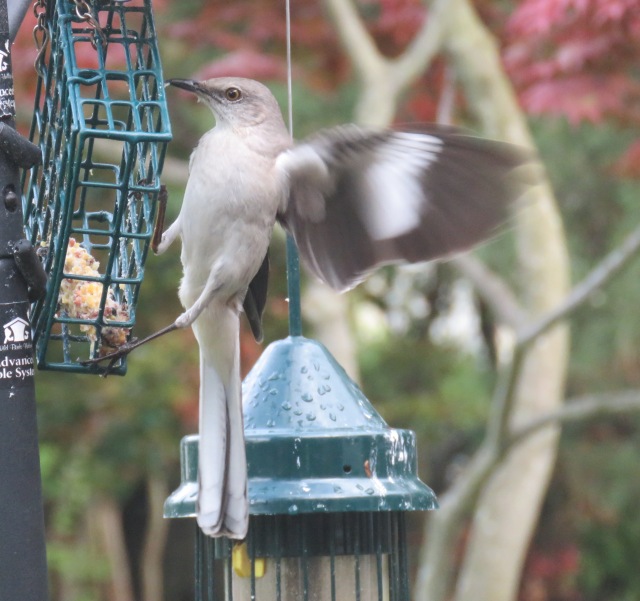 Mockingbird flailing around on my suet feeder

Alright non-snake lovers, time to sign off until next week. I’ll put in a Mayflower picture then it’s off to the snakes. I’ve seen many, many Mayflower plants this Spring, but only a handful of flowers, and none in good light. Here’s one from the creek bank Thursday (even though it’s still April):

Mayflower in the shade Thursday

When my friend Sam and I were hiking at the river Monday, we ran into Rich Young and he told us he’d seen an Eastern Ratsnake near the trail a little ways back and suggested it might still be there. Sam was formerly among the most vehement anti-snake people I’d known, and I was impressed when he wanted to attempt a photograph. It occurs to me now he doesn’t like to be surprised by snakes, and when Rich told him he was going to see it, he was cool and confident and took a great picture. Sam took this picture at 4:20 Monday afternoon. Remember – a year ago, this photographer didn’t even want to be in the same zip code with a snake. Monday he sat down calmly about fifteen feet away and got this great image: 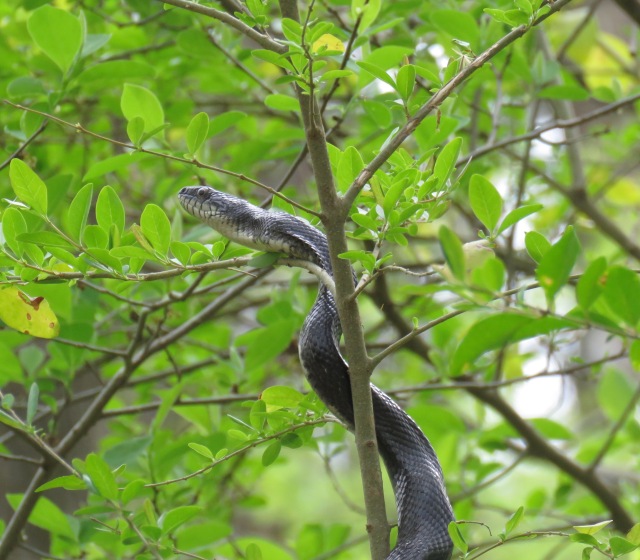 Ratsnakes are constrictors; they are entirely non poisonous. They wouldn’t even bite you anyway, even if you’re very small – they know you’re too big to eat so they’d just leave.

That snake was young and I’m guessing four and a half to five feet long. According to the Virginia Herpetological Society, Eastern Ratsnakes are the longest snakes in Virginia and the only one that regularly exceeds six feet in length. The Virginia record is 6’ 8” (80”) and the all time record is 8’ 5” (101”)! That is a lot of snake! You may notice there are not a lot of visible rodents in Pony Pasture. You can thank the owls and hawks for that, but you can definitely thank the Eastern Ratsnakes. Like the one Sam photographed Monday! I waded into the honeysuckle and got underneath it and took this shot from just below:

Same snake from underneath. I think they scratch their chins on thorns – I’ve seen them do it before

Here’s a video of that snake:

I like this picture of the snake sticking its tongue out:

Snake sticking its tongue out – that’s how they smell

I went to Deep Run on Friday with my friend Kendall and we saw a Northern Water Snake between the two ponds. The background is not as lovely as the one at Pony Pasture, but I was grateful to photograph two snakes in one week, especially two different snakes. Water snakes are also completely non poisonous: 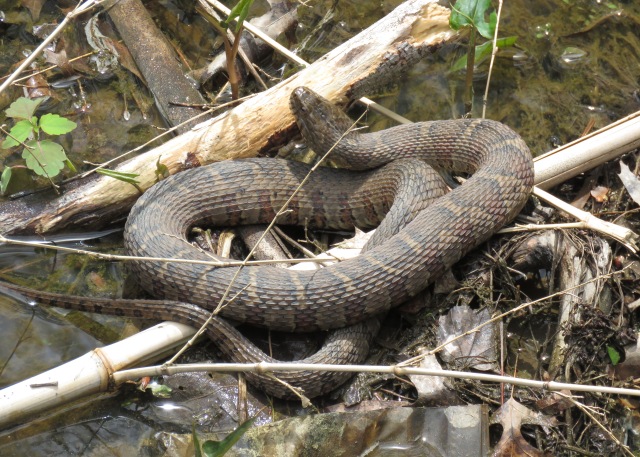 Another image of that snake: 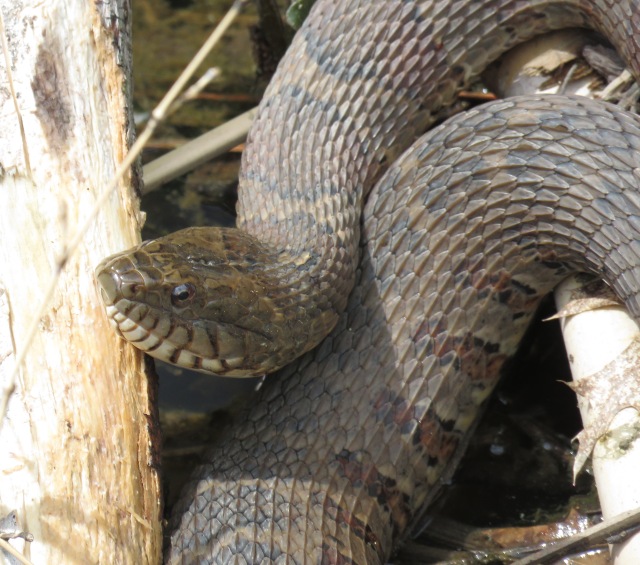 When early season snakes are out, so of course are early season flowers. Dogwoods will stop flowering soon, but I got this one at Deep Run the same day I got that snake: 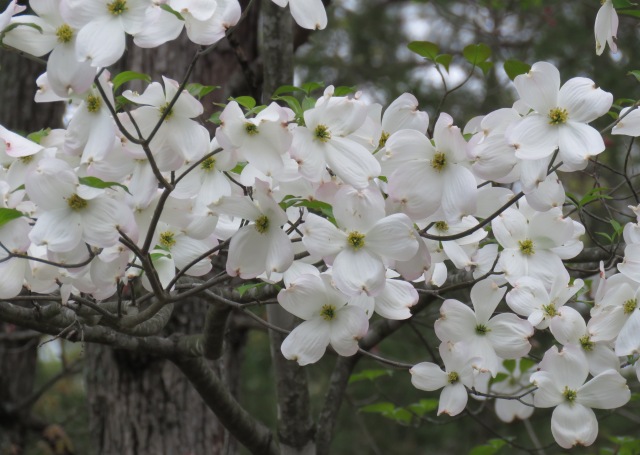 There were other pretty flowers in the park that day. Ev says this is some sort of rhododendron:

Enough! Well, never enough really – I don’t get tired of this. But I do need to get up an hour before sunrise tomorrow, which means I need to get to sleep around ten minutes ago. So until next week! All best,

Some consider them the starlings of the mammal world. But they’re cute.

I am a rehabilitation counselor. I have many friends with autism and traumatic brain injuries. They help me learn new things constantly. I hike with dogs at the James River in Richmond - a lot. I've completed an Iron distance triathlon a year for 11 years. My most recent was in Wilmington, NC in November, 2013. I currently compete in mid-distance triathlons. And work and hike and take pictures and write and eat.
View all posts by Jay McLaughlin →
This entry was posted in Birds, Cessna 172, Flowers, Fun, James River, mockingbirds, ospreys, Pony Pasture, raptors, Rivers, Smiles (including "dog smiles"!), Snakes and tagged bluebird, Flowers, Fun, james river, nature, Northern mockingbird, Ospreys, outdoors, Pony Pasture, Rivers, smile, Smiles - human AND dog smiles!. Bookmark the permalink.

1 Response to Too wet to fly – but there were snakes!