At a loss for words

Primarily because I’m at a loss for pictures. I almost called this one “It’s easy to distinguish between genders” but you’ll have to admit that doesn’t roll right off the tongue. Some animals – think mallards – have vastly different appearances between the two genders. Other animals – think Canada Geese – it’s impossible. They can tell – obviously – but us (or at least me) not so much. Enough (too much) drivel.

I got a Red-tail Monday morning at Freeman High School on the floodlights overlooking the baseball field. But its back is to the camera so I didn’t use it. Almost precisely twenty-four hours later, the same bird or its mate was closer to my house (75 yards away) in better light:

Red-tail glaring in the glaring sunlight

Before I took that picture I’d stopped at the Tuckahoe YMCA to tell my friends why I hadn’t been there since before Memorial Day. I’d broken my hand Memorial Day Sunday (May 27) and I hadn’t visited the Y in over two weeks. That just never happens. Anyway, I stopped by and two male Red-winged blackbirds were carrying on in front of the Y. My pictures of the males were marginal, but I got my first ever decent image of a female. Boy it’s easy to distinguish between genders of Red-winged blackbirds. Here’s a female I saw Wednesday:

Again this picture of a male is marginal, but if you’ve never seen the two, what a difference. It’s iconic to see Red-winged blackbirds on cat tails. It seems like whenever one is around, you can find the other. In the summer, anyway:

I hope I’m not overdoing the gardenia pictures. To call the smell “intoxicating” is not a stretch, so maybe that’s why I keep putting up pictures. The first step is admitting I have a problem:

It looks like whipped cream, like real whipped cream if you make it yourself. My amazement (and gratitude) never fades:

I know (as previously mentioned) that I return to the same themes too often. I apologize to those who are fed up with pictures of our cat Dash:

Take it from an experienced slacker – this is what we do:

I did get a few Red-tailed hawks this week, as noted above, but I got even more Red-shouldered hawks. Here is one from Thursday, Flag Day, my late parents’ 60th wedding anniversary, perched above my sunroof over a friend’s driveway:

Red-shouldered hawk. It flew beside me then landed on this branch.

Here is another Red-shouldered hawk the following morning, but ten miles away – it’s not the same bird or its mate or offspring: 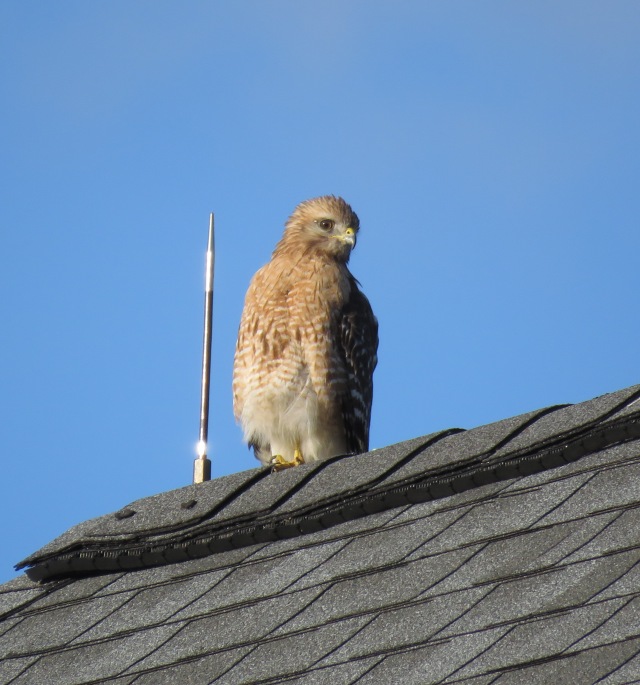 I am not so talented a photographer I can make a tadpole in poor light look good. But I got a few images at Cheswick Park that I believe are worth including here. Here’s one with I think a snail behind it. I also think this is a bullfrog tadpole.

But I’m no expert: 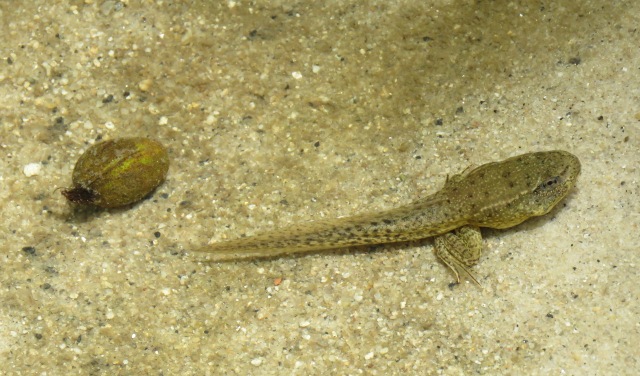 Tadpole on its way to becoming a frog:

Evelyn is my editor so normally I can let myself off the hook with errors. But she’s traveling this weekend so I have to accept responsibility this week. She’ll be home tomorrow, thank goodness. Her nasturtiums are in enthusiastic bloom as they (and we) await her return: 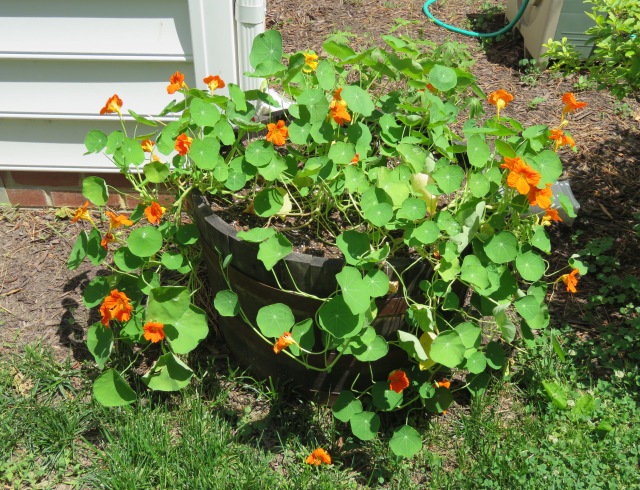 Happy, happy nasturtiums. We’ll ALL be even happier when she gets home tomorrow!

Summer officially begins Thursday (6/21) morning at 6:07 EDT. We’ll continue to get flowers as the days simultaneously heat up and shorten, but they’ll flower with less and less enthusiasm. Here’s a magnolia from Saturday:

Magnolia not fifty feet from where I took the picture of the Red-shoulder on a branch:

Have a great week! Come back next week for the first blog post of Summer, 2018! And Happy Father’s Day!

PS I almost missed this. Today’s Father’s Day and on Friday I got a middling image of my Dad’s favorite bird, an Eastern Bluebird. I hesitate to speak for my late Dad, especially when all my brothers and sisters (I’m pretty sure) will read this. I love to take pictures, but I’m not a perfectionist. I believe you could apply that exact description to my Dad and photography. To my Dad (and me) about a lot of things – love to do it, but not a perfectionist. “Don’t let the perfect be the enemy of the good”:

I am a rehabilitation counselor. I have many friends with autism and traumatic brain injuries. They help me learn new things constantly. I hike with dogs at the James River in Richmond - a lot. I've completed an Iron distance triathlon a year for 11 years. My most recent was in Wilmington, NC in November, 2013. I currently compete in mid-distance triathlons. And work and hike and take pictures and write and eat.
View all posts by Jay McLaughlin →
This entry was posted in Birds, Flowers, Fun, Gardenias, raptors, red-shouldered hawks, Red-tailed hawks, Rivers, Smiles (including "dog smiles"!) and tagged bluebird, Flowers, Fun, Gardenias, nature, outdoors, red-shouldered hawks, Red-tailed hawks, smile, Smiles - human AND dog smiles!. Bookmark the permalink.

1 Response to At a loss for words