I need to warn people who have an irrational fear of snakes (ophidiophobes) that there is a snake picture after the first seven pictures on this blog post. Before you recoil, this snake is worth seeing – it’s bright green, small, non-poisonous, and could even be called cute. Here’s a video from a 1974 Tom T. Hall song called “Sneaky Snake.” It doesn’t have any snake pictures – Sneaky Snake – Tom T. Hall

I started out real slow this week. Monday morning I got a gardenia just beginning to open at 6:00 AM. In hindsight, I should have seen it as a symbol of a week beginning to blossom: 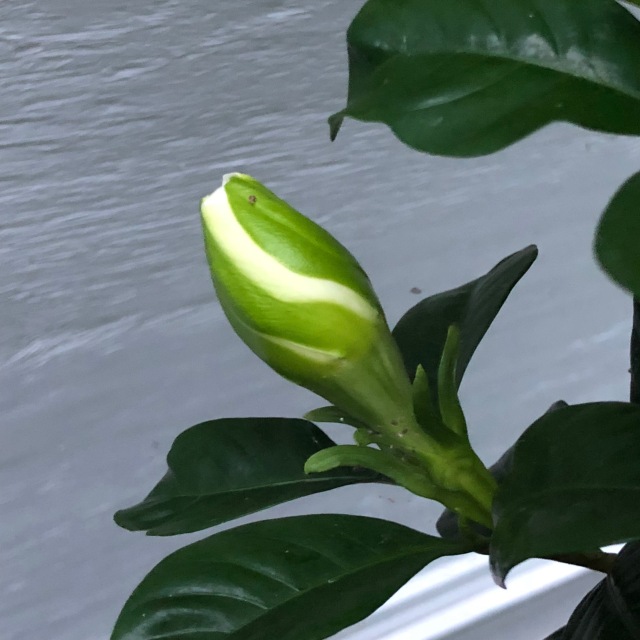 A gardenia begins as the week begins – 6:00 Monday morning

Three hours later I got a Red-tail at Henrico Fire Station 13:

They are not always in a graceful and/or intimidating posture:

A week beginning with a gardenia at 6:00 AM and a Red-tail at 9:00 AM can’t legitimately be referred to as “rags,” but neither of those two subjects are big surprises. They’re sublime and spectacular, but also, at this time of year, somewhat predictable.

Tuesday I got this bluebird picture. Also a bit run-of-the-mill but still, it’s a bluebird:

Any day I see a bluebird is a good day

I could put young bluebird pictures – I might at some point – but they’re not real attractive. At this stage of their development they’re quite adolescent in appearance and manner. One good thing about that is they are assertive to the starlings. Starlings overwhelm the feeders on occasion and it’s good to see another bird give them pause. Especially when it’s a thuggish young bluebird.

Also Tuesday, thanks to Evelyn’s sharp eye, I got a picture of a young skink on our front stoop. Evelyn stopped working on the gardenias and nasturtiums and the rest of our lovely yard to point out this attractive little lizard. I wish I’d had something for scale – a quarter would have been superb. But alas. Have a look: 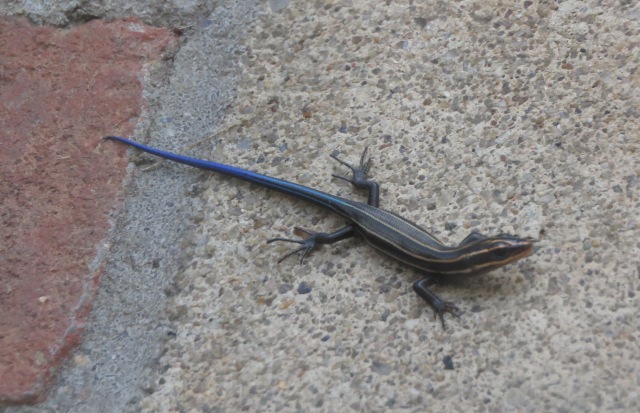 Young skink. See the blue tail? It’s a ruse, to throw off predators. They grab that first, and it breaks off, and the skink scampers away

I’m on a regular schedule flying Tuesdays and Thursdays but the plane has been in the shop this week so we didn’t get to fly. The weather is looking questionable next week, but we’ll deal with that then.

I am aware that I overdo the Red-tails on here, and the Red-shoulders when I can. But I enjoy searching for them, and I enjoy the focus that the photography experience brings. I don’t think of two things at once when I’m photographing – I only think about what I’m doing. And the unblinking calm of most raptors lends itself to that sensation. This big girl was sitting in the sun over the swamp across from St. Bartholomew’s Episcopal Church on Patterson Avenue Wednesday morning:

You cannot beat that light. Plus a branch is a much nicer perch than a powerline.

I took that picture at 9:30 in the morning. Only ten minutes earlier, I’d been driving south on Lauderdale Drive and there was a snapping turtle right in the middle of the road. Not a monster, but it would have gotten close to the edges of an 8½” x 11” page. Although I was helping it out of harm’s way, it scolded me – or that’s the way I interpret this expression:

This snapper felt I was unwise to move it out of the road:

It calmed down when I put it under a bush by the side of the road:

It calmed down when it was back on solid ground

So the “rags” at the beginning of the week were beginning to become riches. I don’t get to handle live snapping turtles every day.

Thursday I have more gardenias – they are loving both Evelyn’s attentions and this gentle  weather – and I photographed a blue and orange sky that looked identical to cotton candy. But I don’t like the picture.

Friday, however, was when the riches really began. I was hiking with a friend and for only the second time in my life saw a Northern Rough Greensnake (Opheodrys aestivus)! Have a look:

Yesterday it rained all day and I didn’t get any pictures, but I did have my longest swim since before I broke my hand in May. It was a big relief. Long swims are always a big relief.

Today at Pony Pasture was when the real “riches” showed up. It rained all morning so we picked up Yuki a little late and headed to the river. The weather was still uncertain and there was no one on the riverbank near the parking lot. We hadn’t been down at that near section recently but ventured down this morning. And saw a bunch of young Barn Swallows on a rock! I have never seen this! Always joyful:

Those were the first  pictures we took – just out of the car – and it was already 12:15! The sky was still a bit threatening but the temperature was pleasant and we headed downriver. We were just getting ready to cross the creek on the big bridge and a couple was walking down the trail. They said they’d just seen a large owl up near the pipeline. I’ve struck out on Barred Owls almost completely in 2018 (except for one Sam and I got in the Spring) but I decided to hike up that way and have a look. I was in the area and didn’t see anything but heard the hiss/screech of a young Barred Owl who believes its parents should feed it. I kept looking and kept not finding, but the owl kept hissing until I got my lens on it. I clicked the first time at 1:00. I got a handful of marginal shots then it flew closer! The leaves are at 100% leafiness right now, and I got a few decent clicks, but nothing I love. Then it flew about twenty feet across the creek, still in plain sight, still hissing. I kept taking pictures. Once it got across the creek, it just stayed. We hiked up to Charlie’s Bridge then checked for deer on the other side of the creek. No deer. So we hiked back down to where the owl was – and it was still there! I took pictures – for forty minutes! Here’s a picture of it contemplating the creek at midday:

Then we headed down the river.

We got to the northeast corner of the park (on the riverbank across the creek from Willow Oaks Country Club) and took a little break. Mackey and Turner and Yuki took it all in: 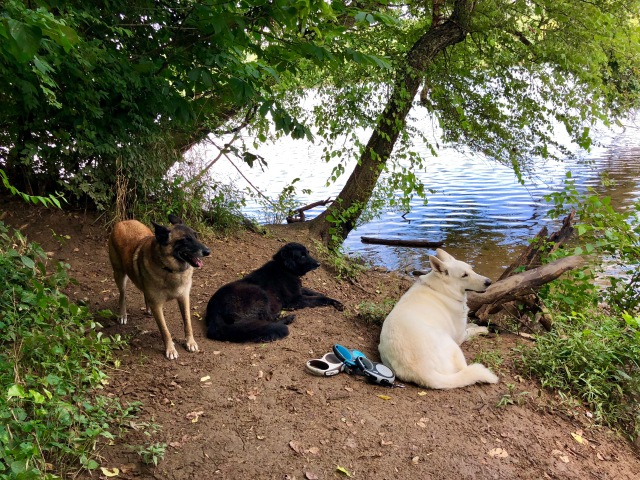 All is right with the world

We wound our way back toward the parking lot. And at 2:30 we heard that same hissing from the Barred Owl, and there it was! Again! Same spot! Here’s what is happening, if you’re interested. I’m reasonably certain this hypothesis is correct. Plenty of readers are more knowledgeable than me; I welcome your corrections. But this is a Barred Owl that hatched this year. Its parents fed it all the time when it was on the nest. As it matured and grew stronger it began venturing out on its own. But the parents kept bringing it food. Every day they bring a little less. I think this morning they left this youngster on a perfect perch – I could have caught a crayfish or frog or turtle or snake there. And the parents are thinking “we’ll let it get hungrier and hungrier, and eventually something will make a wrong move and this youngster will kill its first meal. Problem solved.” Here’s an image from that second round: 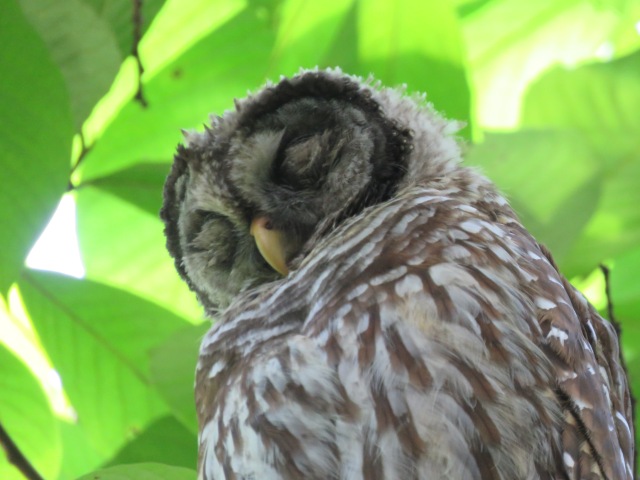 Sleepy young owl dozing off in the afternoon

I also took three videos of the owl. Some folks might need to take Dramamine when they watch my videos, but I keep the shaking to a minimum. This first one  shows the distance to the dogs – the owl was directly above them:

This is the same owl, yawning:

The final video is 30 seconds long. Just at 28 seconds you can hear the young owl’s hiss:

And that’s all for this week! Come back next week!

I am a rehabilitation counselor. I have many friends with autism and traumatic brain injuries. They help me learn new things constantly. I hike with dogs at the James River in Richmond - a lot. I've completed an Iron distance triathlon a year for 11 years. My most recent was in Wilmington, NC in November, 2013. I currently compete in mid-distance triathlons. And work and hike and take pictures and write and eat.
View all posts by Jay McLaughlin →
This entry was posted in Birds, Dogs, Flowers, Fun, Gardenias, James River, Pony Pasture, raptors, Red-tailed hawks, Rivers, Smiles (including "dog smiles"!), Turtles and tagged Barn Swallows, bluebird, Dogs, Flowers, Fun, Gardenias, james river, nature, outdoors, People, Pony Pasture, Red-tailed hawks, Rivers, smile. Bookmark the permalink.

6 Responses to Rags to riches