“Out to lunch” or “god spelled backwards”

On final approach at runway 06 at W95 (Ocracoke Island Airport)

I’m working on some cross country flying plus navigation and this has been a lovely week. I took the top picture when we were on our fifteen mile final approach to Ocracoke Island airport, known to the FAA as “W95.” We were close at that point, maybe a mile away, 300 feet off the ground and going around 65 knots (75 mph). We walked about ten minutes to Howard’s Pub and I had crab cakes for lunch. For the second time this week! The first time I had crabcakes for lunch was Tuesday; we went back to Tangier and had lunch at Lorraine’s. I’m a native Marylander, so if someone asked me which I liked better – North Carolina (Ocracoke) or Virginia (Tangier) crabcakes I’d say “Maryland.” But they we both fresh and outstanding and I’d eat either of them again in a minute.

I  had my “big pack” at Pony Pasture this morning, Mackey and Turner and Yuki and Lola and Luna. It was Sunday and I looked at them and they looked like a little congregation and I thought “god spelled backwards!” – here they are: 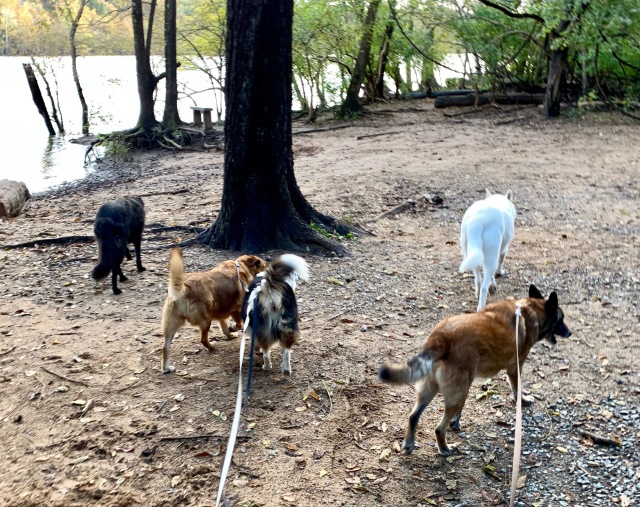 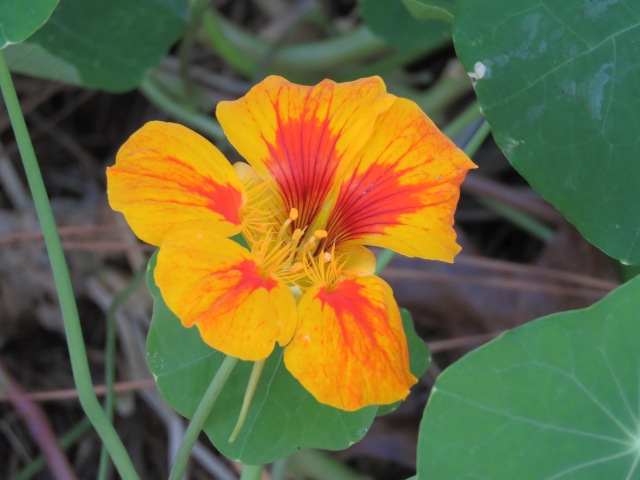 The same time I was out looking at the nasturtiums – before I brought my camera out – I looked up and there were three Red-tails circling over our house! I’ve never seen three red-tails at once before (except for babies on a nest) in my life! I went in and got my camera but only in time to get this sub par image of two of them:

Two of the three Red-tails circling above my driveway Monday morning:

I haven’t gotten a train picture I’ve enjoyed recently, but my buddy Clark and I were down at Brown’s Island Wednesday and there was a long CSX coal train parked on the southern track. You can’t see all of them on this image but there were four locomotives on this train. You need a lot of power (four locomotives) to pull the weight of all that coal, but you really need the power to stop all that weight when you’re coming down a mountain. Always impressive:

In other flying adventures this week – or, more precisely, combined with the adventure I had Tuesday – there was a fully functioning and restored Boeing B-17 Flying Fortress at Hanover airport! I took this picture with my phone:

Boeing (yes, that Boeing) B-17 Flying Fortress at Hanover airport this week. It flew in and flew out!

I took this picture Thursday morning before I preflighted the plane:

The smell of alcohol

See those puddles underneath? I was under there checking the gas (one of the fuel tanks is on the bottom) and I smelled alcohol. The plane had frost on it overnight – which adds too much weight – so they spray rubbing alcohol on it to melt the frost. Who even knew? Do you ever see on the news during real cold weather at a big airport, they spray the wings with vapor? That’s alcohol, but that’s for giant passenger planes. We spray the same thing, only out of the same thing you use to maybe spray weed killer on dandelions. Holds a gallon or two. Crazy stuff you learn.

Hopefully blog followers are not tired of pictures of our worried, anxious, fearful, insecure cat Dash:

I took one of these on Monday and one yesterday. He alternates between this and eating and the litterbox. His days are uncomplicated: 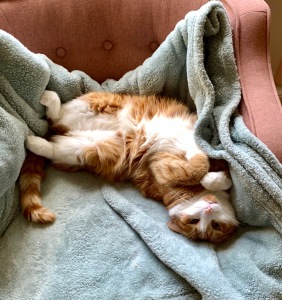 I was flipping through pictures on my phone and just as I saw the picture of Dash I saw another image. I work with a guy who has extreme anxiety problems secondary to a severe traumatic brain injury he survived many years ago. He has this reminder over his desk: 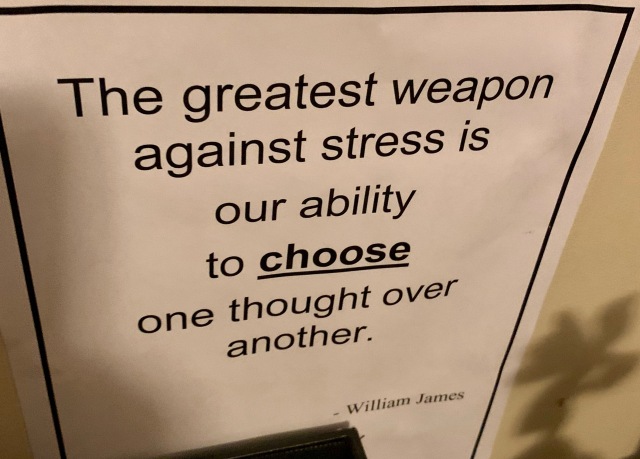 I don’t know what thought Dash chooses. But it’s totally the right choice.

Take it from Dash and choose the right thought this week. And come back next week! All best,

I am a rehabilitation counselor. I have many friends with autism and traumatic brain injuries. They help me learn new things constantly. I hike with dogs at the James River in Richmond - a lot. I've completed an Iron distance triathlon a year for 11 years. My most recent was in Wilmington, NC in November, 2013. I currently compete in mid-distance triathlons. And work and hike and take pictures and write and eat.
View all posts by Jay McLaughlin →
This entry was posted in Birds, cats, Cessna 172, Dogs, Flowers, Fun, James River, outer banks, People, Pony Pasture, raptors, Red-tailed hawks, Rivers, Smiles (including "dog smiles"!) and tagged cessna, Dogs, Flowers, flying, Fun, james river, nature, outdoors, People, Pony Pasture, Red-tailed hawks, Rivers, smile, Smiles - human AND dog smiles!. Bookmark the permalink.

5 Responses to “Out to lunch” or “god spelled backwards”