Giving thanks for great luck (luck counts too!)

I got two pictures of that Cedar Waxwing (Bombycilla cedrorum) before it vanished, and that was one of them. That’s luck. It’s really, really good luck, and I got the picture because I was hiking in the woods with my camera on Thanksgiving, but it’s still luck. I took that picture at 11:40 on Thanksgiving. We kept walking, and I took this picture eleven minutes later at 11:51: 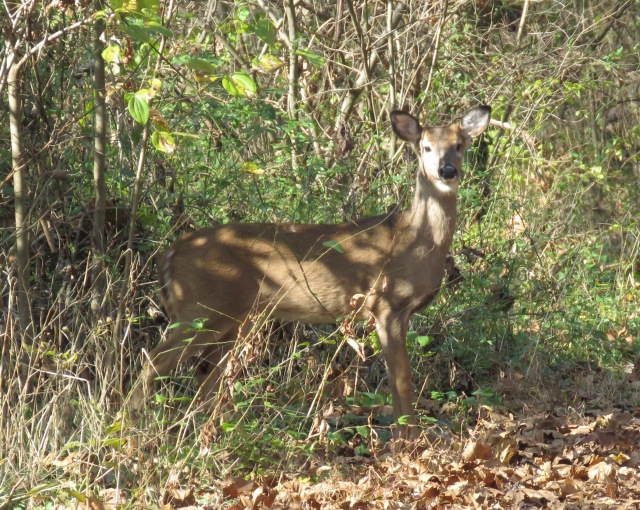 It’s not an award winning image (I call my favorite shots “magazine covers”) but I’m always happy to see a deer.

Speaking of non-award winning pictures that I’m still always happy to take, look what was in the dumpster in the parking lot when I threw some trash in. I took this picture seventeen minutes after the deer at 12:09:

Obviously the background is not something you’ll see in a nature documentary, but we see them where we see them. I took a 27 second video of it munching away on its Thanksgiving dinner down there. It’s not an attractive background, but you get a good view of what it looks like when a raccoon is eating. He’s drinking the last drops of a venti no whip pumpkin spice three pump latte. I’m kidding. It’s some sort of plastic bottle with who knows what inside. But the raccoon is industrious about getting it out. I have no idea what this animal’s gender is:

Also on Thanksgiving – all the same day – I finally got my first buffleheads of the year. I apologize (yet again) for the inferior quality of this image. But I am fond of buffleheads. More soon, but here’s my first one of the season – a male: 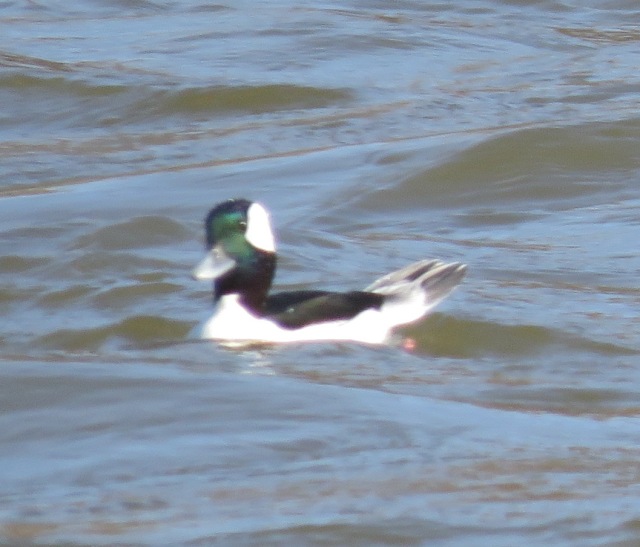 My first bufflehead of 2018 – on Thanksgiving Day

When I began thinking about “luck” as it relates to this post, I was thinking about that cedar waxwing – images like that with me are pure luck. And I’d gotten the bufflehead a few minutes earlier, and the deer and the raccoon in quick succession afterward. But deer and  bufflehead and raccoon (in a dumpster!) photography at Pony Pasture don’t take much luck – you can pretty much just show up and get those pictures.

But at 4:30 Thanksgiving afternoon Evelyn and I fed the dogs and drove out to my brother Kevin’s house in Doswell for our family Thanksgiving. And I was looking at my siblings and my nieces and my in-laws and our friends and all that food and thinking this is lucky. Because I’m from a family of seven, and they’re all excellent human beings, and that is pure luck. I  did nothing to make that happen. I just got lucky. I sure am thankful for it!

I was lucky when I rode my bike Monday afternoon there were no insects swarming out of this nest. This is the time of year when hornet’s nests become visible – all the leaves are off the trees. They’re also empty or dormant, or they have been so far. I’ve found hornet’s nests in autumn many times. I posted one earlier this year (on Sunday, January 14) and my wise friend Kim taught me these are Bald-faced hornet (Dolichovespula maculata) nests. And that they’re not “true” hornets – they’re actually yellow jackets. But this is just the nest – about eighty feet in the air and (I presume) unoccupied:

I was planning to fly Tuesday but it didn’t come together. First the Cessna 172 I normally fly was in the shop, so I began preflighting N2551U, a Piper Warrior. It’s very similar to a Cessna 172, but unfortunately this one had another similarity – it went into the shop. So on our third try we pre-flighted a Tecnam P-92 Eaglet. I’ve pre-flighted Cessna 172’s dozens of times so I’m able to do it quickly and efficiently. But I’m slower with the other two. Finally we were ready to fly the Tecnam and we went inside to get a weather briefing. The wind had come up and there were 19 mph gusts. My instructor Ernest decided (wisely) that we should fly another day. So we will. He told me something about his decision that I wouldn’t have thought of. Let’s say we were landing into a 19 mph gust and we’re coasting in about fifteen feet above the runway and the gust stops. We’d drop like a stone. I’d never thought about the problem from the wind stopping – I only thought about the gust itself. Fascinating.

Here’s the Tecnam I’d planned to fly. If it hadn’t been so windy!:

Tecnam P92 Eaglet I’ll get to fly another day

I later learned another fact that I’m sure contributed to Ernest’s not wanting to fly in the Tecnam in the wind. I went home and read up on it and learned it weighs less than half as much as the Cessna. The Cessna’s I’m used to flying weigh 2,550 lb. The Tecnam weighs 1,212. Isn’t that incredible? Just look at those two numbers and think about the way a 19 mph wind gust would affect them. We can fly again next week!

Meanwhile – if anyone is interested – I use a program called ForeFlight to plan my flights. It’s remarkable – it accounts for everything. Altitude, speed, direction, weather, fuel, wind, runways, it is mind-bogglingly comprehensive. Tuesday we had planned to fly to four new airports to get my Aviation Ambassador passport stamped. We’ll do it another time. But this is the course I’d set up:

My planned course to get my next four passport stamps

I keep thinking every week is the last week for flowers, but Evelyn keeps getting more from our yard. These nasturtiums are from this week: 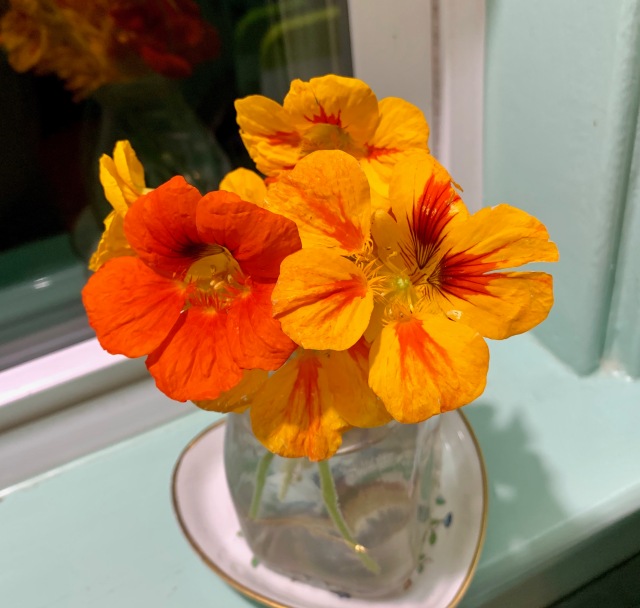 Saturday it’ll be December! Look at those flowers!

I hope your Thanksgiving week’s been great, and next week’s even better. And come back next week! All best,

I am a rehabilitation counselor. I have many friends with autism and traumatic brain injuries. They help me learn new things constantly. I hike with dogs at the James River in Richmond - a lot. I've completed an Iron distance triathlon a year for 11 years. My most recent was in Wilmington, NC in November, 2013. I currently compete in mid-distance triathlons. And work and hike and take pictures and write and eat.
View all posts by Jay McLaughlin →
This entry was posted in Birds, buffleheads, cedar waxwing, Cessna 172, Dogs, Flowers, Fun, James River, Pony Pasture, Raccoons, Rivers, Smiles (including "dog smiles"!), whitetail deer and tagged bluebird, buffleheads, cessna, Dogs, Flowers, flying, Fun, james river, nature, outdoors, Pony Pasture, Rivers, smile, Smiles - human AND dog smiles!, whitetail deer. Bookmark the permalink.

5 Responses to Giving thanks for great luck (luck counts too!)