Posted on December 9, 2018 by Jay McLaughlin

I am totally using this image without permission. I took a screenshot of my niece Aileen’s instagram page. Aileen drew the pictures of the foxes – probably foxes from near her family home in rural Maryland. I know nothing about this picture or this quote, except that she drew the pictures of the fox, and she chose this wonderful quote from the late, great, Johnny Cash. Check out this level of talent: 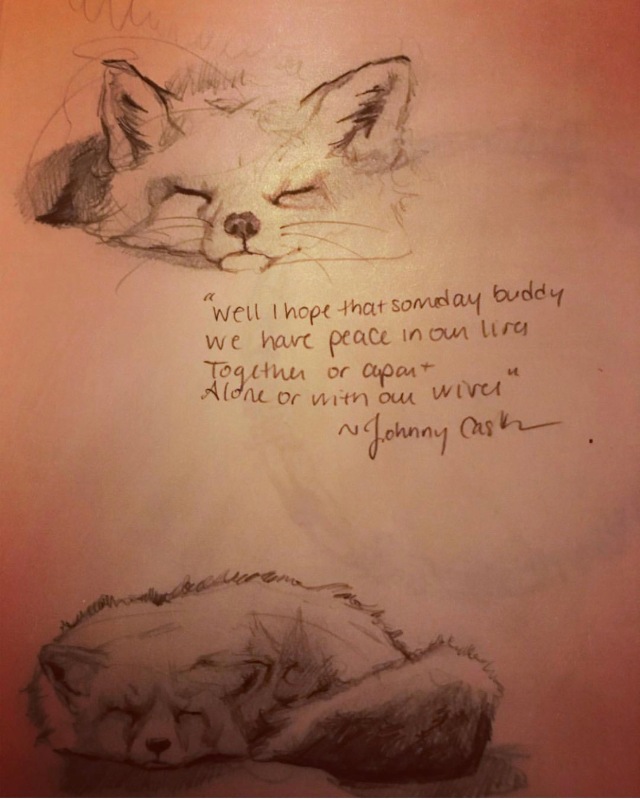 Thank you Aileen! I hope you don’t mind that I used this!

This was the first thing I saw at work Wednesday morning – this great blanket:

And we went to Whole Foods to get coffee, and the guy sitting next to me was wearing this hat, and I showed him the blanket picture (above) and asked if I could photograph it. He enthusiastically agreed:

Evelyn and I had a late lunch/early dinner at Fresca that day and went window shopping down the street – and saw this mug. This is a wonderful season: 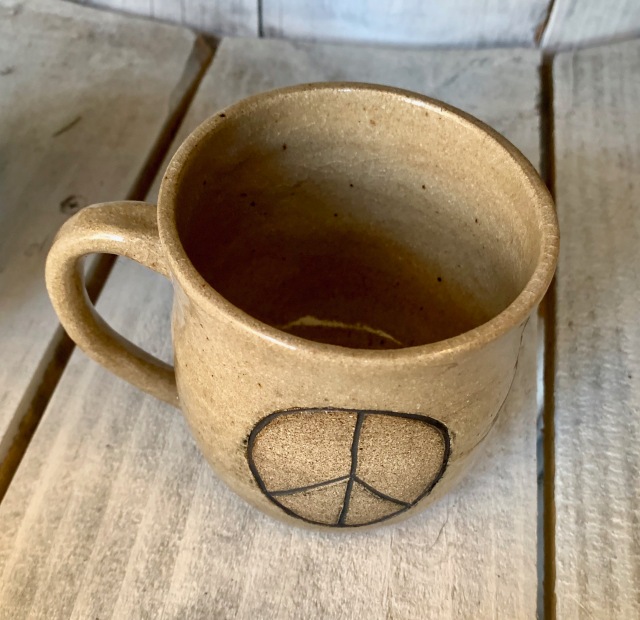 It’s a wonderful season for flying too. Ernest and I had a great flight Tuesday, we went to Franklin, Suffolk, Norfolk, Chesapeake and Newport News. It was flawless weather and we saw new sights everywhere we landed. Including in Norfolk, our lunch stop. The flight service there, Signature Flight Support, loaned us a car. We went to the MP Island Cafe in Norfolk and I had goat stew for lunch. Because they were serving it, and when will I have that opportunity again?

I took this picture when we were flying above Newport News:

I took the picture above at 12:10 on Tuesday. Twenty minutes later we were walking near the runway at Norfolk International Airport (KORF) and looking at some military surplus aircraft parked behind a hangar. This is an old North American Rockwell OV-10 Bronco:

Our next stop was Chesapeake Regional Airport. Since I often indulge the geek/nerd aspects of my personality (they’re never far from the surface), I wanted to do a closeup of this fascinating plane that was parked in front of the airport. I have closeups but also limited blog space. And I could not resist the sky in this image. The plane is in the foreground in the center. It’s an Aerofab Inc. Lake 250 Renegade seaplane. I love this image – the plane and the clouds and the sky:

Lake 250 Renegade seaplane Tuesday at Chesapeake airport. And look at that sky!

And Mackey and Turner and I went to the South of the James Farmer’s Market here in Richmond to pick up maple syrup from our favorite Highland County maple syrup operation, Back Creek Farms. 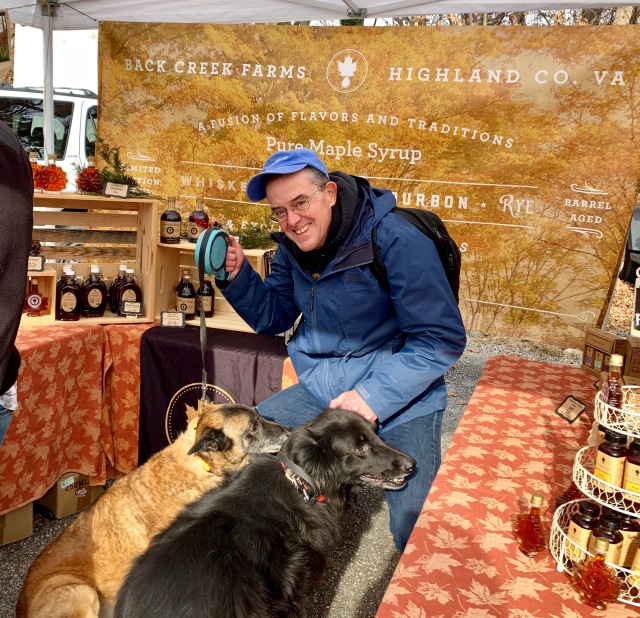 Mackey, Turner and me at the Back Creek Farms maple syrup stand at the South of the James farmer’s market yesterday

I got a GIANT Oatmeal Cream Pie (they call them “OCP’s”) from tABLEspoons by the next move program. It fueled me up to go home and cut the grass for the last time in 2018. Mostly to mulch in the leaves. So check out this OCP:

I gobbled it down and cut the grass. Here’s my front lawn yesterday afternoon:

My front yard yesterday afternoon; I just cut and mulched it, fueled by OCP OMG

Anyway. So in between those two pictures, Mackey and Turner and Yuki and I took a quick, snowy three mile hike at Pony Pasture. This was before the snow began in earnest: 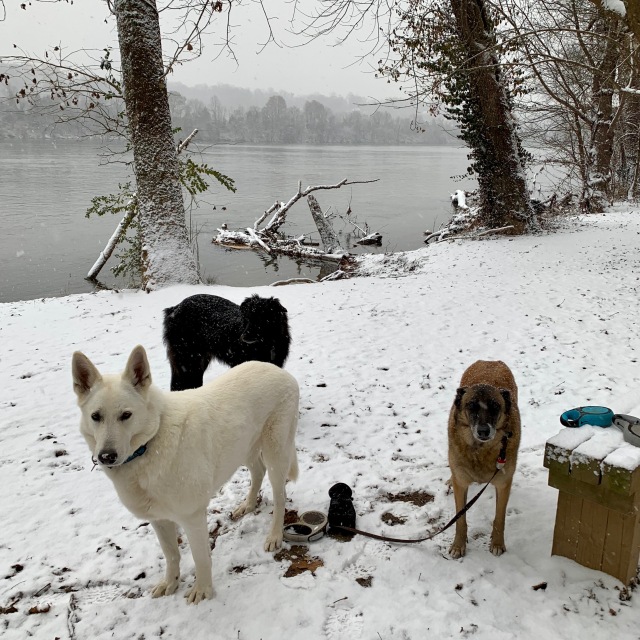 Mackey, Turner and Yuki at the river this morning. “Yuki” is Japanese for “snow” – seriously!

There was a moderately large herd of whitetails stamping around in the snow near Charlie’s Bridge. The photography conditions weren’t great; this was the only image I got. Maybe next week will be better. If I don’t say that every week I certainly think it every week: 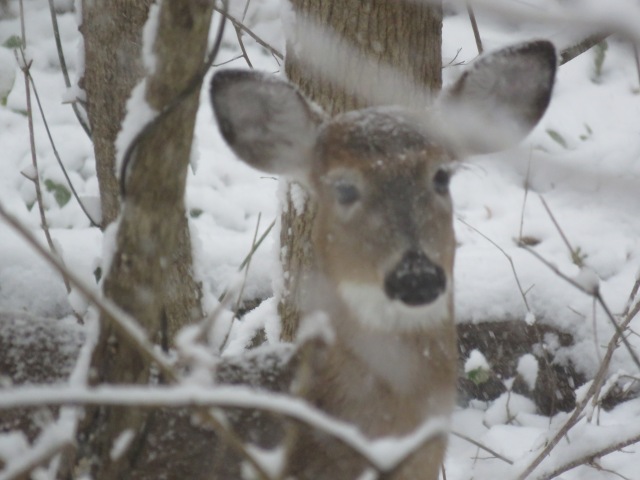 I hope your week’s been wonderful! I hope next week is even better! All best,

I am a rehabilitation counselor. I have many friends with autism and traumatic brain injuries. They help me learn new things constantly. I hike with dogs at the James River in Richmond - a lot. I've completed an Iron distance triathlon a year for 11 years. My most recent was in Wilmington, NC in November, 2013. I currently compete in mid-distance triathlons. And work and hike and take pictures and write and eat.
View all posts by Jay McLaughlin →
This entry was posted in Birds, Dogs, Fun, goats, James River, Pony Pasture, Rivers, Smiles (including "dog smiles"!), whitetail deer and tagged clouds, Dogs, Endurance, flying, Fun, james river, nature, outdoors, People, Pony Pasture, Rivers, Smiles - human AND dog smiles!, whitetail deer. Bookmark the permalink.